For those who live inside a myth, it seems a self-evident fact.

BALTIMORE, MARYLAND – We began the weekend in hushed anticipation of an approaching snowstorm. All week long, the weathermen had been warning us we’d get two inches… then four inches… then six inches…

It didn’t matter; like a child, we looked forward to the first snowfall of the year.

So we worked hard all Saturday… ricking up firewood, laying in supplies of milk, bread, and alcohol, and putting the grading blade on the tractor.

By 4 p.m., the first stray flakes were falling. And we were ready for them. We retreated indoors, drank what was left of the Christmas eggnog, sat down in front of the open fire… and fell asleep.

On the family farm, Bill prepares for the snow with plenty of firewood

When our editor awoke, he was greeted by eight inches of snow

Every era has its busted myths and failed dreams. Wall Street and Washington wallow in them.

The practical challenge for us is not to be smarter than other investors or wiser than other voters… but merely to step outside the myth long enough to get a good look at it.

In the 1960s, the idea was that you could just buy the leading stocks – the Nifty Fifty; it seemed a foregone conclusion that you’d get rich as America’s commercial genius conquered the world.

But in 1966, the Nifty Fifty stocks started to slip. The group, overpriced and overhyped, underperformed for the next 20 years; many of them disappeared.

In the 1980s, it was Japan, Inc. that captured imaginations. Everyone wanted to learn the latest Japanese business jargon and imitate Japan’s extraordinary success.

Then, in the late 1990s came the dot.com boom. Everybody knew that the new internet technology would set the world on fire – with faster growth, higher wages, and no need for debt financing (information would replace the need for capital!).

That dream washed up over the next two decades. Growth rates have fallen, wages have gone nowhere, and there’s more debt than ever.

Then came the myth that “house prices never go down” … which blew up in 2007.

Assets, markets, companies, and empires rise and fall. No single one, or group of them, ever dominates for long.

But now comes the most absurd myth of all – that the feds can “manage” and “guide” the economy, not only to make it better, but to make sure nothing bad happens.

In these diaries, of course, we have deconstructed various elements of this dream many times. Taken together, they are a breathtaking bunch of poppycock.

Where does the Fed get any money? How does it know what short-term interest rate the economy needs?

Every alert citizen knows that his politicians and bureaucrats are incompetent, self-serving rascals. And every economist guffaws if you suggest that bureaucrats should fix the price of oil; they know that only willing buyers and sellers can discover the correct prices – in “the market.”

But when it comes to an even more important price – the price of credit – credo quia absurdum (I believe because it is absurd). They trust the honchos at the Fed to do it instead.

And look at the record! U.S. monetary policy for the last 30 years is nothing more than the classic three mistakes over and over.

Mistake #1 – keep interest rates too low for too long. Mistake #2 – raise rates to try to mitigate the damage from Mistake #1. Mistake #3 – drop rates in a panic when Mistake #2 causes the economy to crash.

You save (surpluses) when the gettin’s good… and spend (deficits) when it ain’t. Pharaoh did it 3,000 years ago – storing grain during seven fat years… and releasing it during the seven lean years. It’s so simple, even a moron could do it.

Which should have been well-suited for the feds. But for half a century – including two of the fattest booms in our history – they flubbed it. They just borrowed more and more money – as if we were always in a crisis.

Not a penny of savings or surplus has been seen since the Carter administration. And now, the country faces the biggest debt crisis in the history of world.

So what do the world’s leading economists suggest? How do you get out of a hole that deep?

Here’s where the absurdum kicks into hyperdrive – they propose to borrow more!

Olivier Blanchard, formerly with the International Monetary Fund, now with MIT, recently gave a speech to the American Economic Association.

Says he: [High levels of debt] “may not be so bad.” The drift of his speech was that if an economy is growing at 4% and debt is priced at 2%, debt is no problem; the economy grows faster than the debt, so it will grow its way out.

This view was buttressed by, who else, Paul Krugman.

The New York Times columnist made his position clear years ago:

[The nation needs] sharply increased public investment in everything from energy to transportation to wastewater treatment.

How should we pay for this investment? We shouldn’t… Right now, there is an overwhelming case for more government borrowing… Spending now would mean a bigger economy later, which would mean more tax revenue.

What’s the matter with these people?

Since 1980, the feds have spent $20 trillion more than they have taken in. This year, spending will outpace tax receipts by roughly $1 trillion. And we’re still in a recovery. Where is the promised growth? Where’s the missing revenue?

Of course, the idea is absurd. There is no plausible theory… and no observable case… where people get richer by borrowing more and more money, year after year. Instead, they go broke.

It’s only by saving money and investing it wisely that it is even possible to get ahead. And the feds are unable to do either.

But that doesn’t mean we won’t see even bigger deficits and more debt. Stay tuned for a guess about the future… tomorrow…

That’s the story of today’s chart, which maps the expected portfolio allocation changes institutional investors plan to make this year.

This chart comes from BlackRock – the world’s largest asset manager with $6.4 trillion in assets under management for institutional investors around the world. 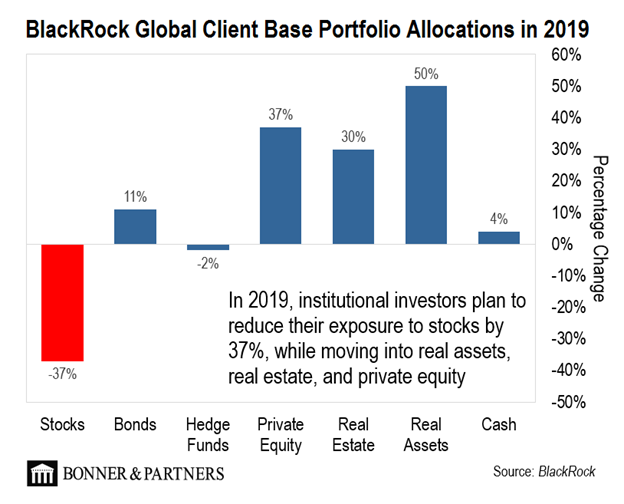 As you can see, BlackRock’s institutional investors plan to reduce their exposure to stocks by 37% this year.

And since BlackRock’s investors currently have $3.4 trillion in stocks (including ETFs), that means we could see a whopping $1.2 trillion flee the stock market over the next 12 months. For context, that’s almost 6% of the S&P 500’s total market cap.

In global markets, nothing happens in a vacuum. That much institutional money planning to flee stocks would likely lead to other big investors getting out of stocks also. And when that happens, stock prices will fall.

As we’ve been showing you the past few days (catch up here and here), stocks are not out of the woods yet. This is further evidence that investors should be very careful going forward.

Is Congress Dumb?
As Bill wrote above, the feds have constantly failed to balance the books. But that’s not all our congressional representatives struggle with. New technology also appears to be a tough concept, as the recent congressional hearings of Silicon Valley executives demonstrated. The antics have one former representative wondering: Is Congress stupid?

Self-Driving Cars Are Here
You may not realize it. Few newspapers reported on it. But a self-driving vehicle recently made a coast-to-coast trip – from California to New York – without a human touching the steering wheel once. That alone is impressive, but it’s what the car was carrying in the trunk that you need to pay attention to…

Who to Thank for a Higher Housing Market
The national housing market is up, big time. Nationwide, the value of all U.S. homes is up 49% since 2012. That’s impressive – until you learn where most of the growth came from…

In the mailbag, dear readers continue to discuss America’s youngest congressperson, Alexandria Ocasio-Cortez. Are her ideas dangerous, as Bill said? Or are they long overdue?

You have nailed this editorial, and the wise will make their preparations today. Also, the wealthy can look forward to a sizable reduction in the gift and estate tax exemptions. Better use that gift tax exemption while you have it. Seriously, I’ve enjoyed your insights for many years, thank you.

I am already a fan of AOC. Some of her ideas are long overdue in an affluent, progressive society. And I fear you know little or nothing about global warming. It is a peril of unparalleled severity!

You know, Bill, it’s easy to understand why you find fault with Rep. Ocasio-Cortez’s ideas of paying for job creation, healthcare, college tuition, etc. by taxing the ultra-wealthy at a 70% rate. After all, you’re one of the ultra-wealthy who would get nailed by said tax.

But let’s get real here… You are continuously pounding your drum to the tune that the super-rich have gotten that way courtesy of the Fed’s funny-money policies and the machinations of the Deep State. You would have us believe that you are outraged by that fact. If you are, in fact, outraged at the inequality of the rich getting richer while we poor get poorer, courtesy of a rigged system, you should be Ms. Ocasio-Cortez’s greatest supporter.

No matter that her ideas of government-provided, cradle-to-grave security are as doomed to failure as any Communistic system. The entire economic structure of America and the world at large is about to self-destruct (another fact you pound out on your drum, incessantly). So what difference does it make? I, for one, would enjoy watching the wealthy elite get their just desserts. If someone earning $10 million a year gets taxed at 70%, which leaves them with $3 million, can’t live on $3 million per year, screw ‘em, I say. They don’t deserve any sympathy!

Meanwhile, there seems to be some disagreement over how President Trump conducted a recent meeting…

Get your “facts” right – numerous attendees said that Trump didn’t have a temper tantrum and slap his hand down etc., as that idiot Chuck Schumer alleges. The latter and his “friend” Nancy Pelosi are totally hypocritical on border security.

By the way, I have no argument with your thesis about corrupt politicians, the buying of votes etc. An absolute disgrace.

You must not have listened to Mike Pence. He said none of that happened. We all know what a liar Chuck Schumer is. Trump simply asked Nancy Pelosi what her position was on the wall. When she said she won’t budge, he said the meeting was over. Who would you trust with your wallet? Pence or Schumer? I think I know what your answer is.

I think the problem with expecting Donald Trump to be the president who limits federal spending is that in his experience, money is unlimited. Given $100 million by his father to start his real estate career, The Donald failed three times, only to be rescued by, respectively, his Dad, Saudi interests, and the Russian mob. I suspect he thinks the government workers not being paid for their work should just ask their fathers for money to pay their bills.

This could be the biggest investment story of 2019…

That’s the message from Jeff Brown, Bill’s top tech expert. It’s not cryptos or weed stocks. It’s a technology that the U.S. desperately needs if it’s going to stay ahead in the global economy. 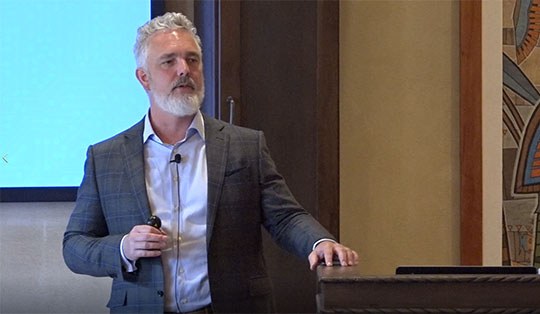