DUBLIN – Stocks sold off on Friday. But not as much as we expected.

Our guess is that investors are turning fearful. On Thursday, the U.S. president said he was protecting Americans from Mexicans. Mexican imports will face tariffs until immigrants stop sneaking over the southern border, POTUS said.

And on Friday, Indians posed a threat. ZeroHedge:

In his latest act of aggressive protectionism in what has already been an action-packed week, Trump late Friday announced that his administration was terminating India’s designation as a developing nation under a trade program that allowed Indian exporters to ship 2,000 products into the US duty free. The decision to revoke India’s preferential trade status, which mirrors Trump’s decision to revoke Turkey’s status under the program a few weeks back, comes one day after Modi was sworn in for a second term.

If Mr. Trump is right, Americans no longer want free trade; they want protection from it.

And if the Democrats are right, they want protection from free enterprise, too. The Washington Post:

Former Colorado governor John Hickenlooper found a way to stand out at a crowded gathering of California Democrats: He denounced “socialism,” and got booed.

“If we want to beat Donald Trump and achieve big progressive goals, socialism is not the answer,” Hickenlooper said at a Saturday afternoon session of the state party’s annual convention.

Meanwhile, everyone seems to want protection from free markets. As predicted, Modern Monetary Theory (MMT) is growing like a poisonous mushroom. A new 600-page textbook on MMT was released recently… and sold out immediately.

The first MMT textbook, a 600-page volume titled “Macroeconomics’’ and aimed at college students, has sold out of its initial print run, according to publisher Macmillan – about two months after the launch party in London. Macmillan didn’t specify how many copies it printed. But it said more are on the way.

“Print more!” was the tongue in cheek comment of a sharp-witted wag.

Printing more money is what MMT is all about. And printing more is what the Trump administration, Congress, the voters, economists, and Wall Street want.

After all, why go out into the fiercely competitive win-win world and try to earn more… when you can print more at home?

The formula – fed-managed trade, high tariffs, a socialized economy, price fixing, crony coddling, and money printing – has been a big success, at least with politicians.

Every sh*thole country in the world has tried it, at one time or another. Zimbabwe, Venezuela, Argentina, Brazil… Peru had 7,000% inflation in 1990. Argentina currently has about 56% inflation – even with a reasonably sensible government.

Venezuelan inflation is running so hot, the statisticians can’t keep up with it; one estimate is 3 million percent.

Everything in the natural world is cyclical. Our eagerness to forget the lessons of the past (and present!) ebbs and flows like everything else. And no matter how many times you run the experiment, there are always people who want to run it again.

Last week, we looked at the big mood swings that take place over decades. Sometimes people are optimistic and open to new things. Then, they grow fearful and close the doors. It’s either “pollination… or predation,” a Dear Reader proposed.

This air du temps is most accurately captured in the Greed/Fear ratio, which measures the amount of real money – gold – you need to buy the 30 Dow stocks.

Going back 100 years, the average is around 10. So, you might say that at 5, stocks sell for about half what they are worth.

At 20, they sell for about two times what they are worth. So today, at 21, the Dow-to-Gold ratio tells us that stocks are high, compared to real money.

More important, the Greed/Fear ratio tells us where we are in the great emotional tide. Everything else (or almost…) is BS – earnings estimates, the Fed model, interest rates, P/E (price-earnings), sales, Cramer, Powell, and every self-promoting analyst on CNBC.

The “greed” side of the equation (the Dow) depends on the interest rate – as jived and jimmied by the Fed. The other side (gold) depends on the fickle esprit of the retail investors – as misled by Wall Street and the press.

And they all depend on the fake-money system, wherein every word, every price, and every opinion floats on a bubbly sea of phony statistics, fraud, and fantasy money.

The Dow-to-Gold ratio gives us a way to keep our feet on the ground.

But which way are we going?

Like the credit cycle, the Greed/Fear cycle tends to last a generation – about 33 years, peak to peak.

After the peak in 1929, it took 33 years for it to come back and crest again, with the following flood tide hitting its peak another 33 years later, in the year 2000. 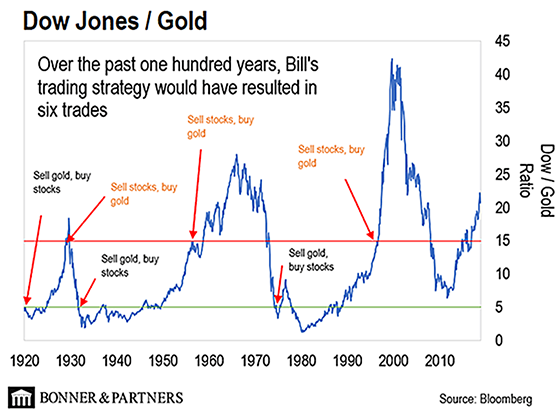 Then… beginning in January of 2000, the Dow fell… and the Greed/Fear ratio went down with it for the next 11 years.

We were watching closely, because we had been out of the stock market since 1996. We were waiting for the Greed/Fear ratio to get back under 5, so we could safely buy stocks again.

But rather than go all the way down to its point of maximum anxiety – about 2.5 ounces to buy all of the Dow – the feds intervened with $14 trillion in monetary and fiscal stimulus. This drove the index back up over 22 in September 2018. Since then, it’s been going down again.

Which makes us wonder: Was the run-up in stocks since 2009 a kind of Greed/Fear fake-out… a case of doomus interruptus… leaving the financial world – and the voters – deeply unsatisfied?

Are we still on the downward slope – dominated by fear – where we’ve been so far this entire century?

And isn’t that also why a long-shot outsider, Donald Trump – a “tariff man,” a fear guy – narrowly won the White House in 2016? In the seventh year of a boom, voters should have been fat and sassy; instead, they were disgruntled.

And it’s not hard to see why. The boom was phony. The correction never corrected anything. And the rising tide afterward was an illusion.

As we will see tomorrow, the downward, fear-inspiring trends continued throughout the 21st century… and now… the Greed/Fear ratio heads for its rendezvous with destiny.

The Fed could cut rates as soon as next month…

That’s the story of today’s chart, which maps the probability of the Federal Reserve cutting the federal funds rate during its July 2019 FOMC (Federal Open Market Committee) meeting. 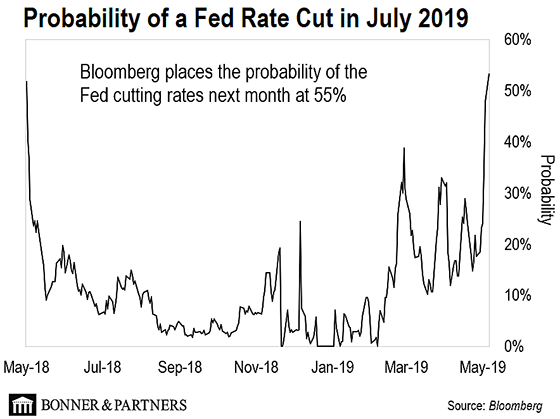 As you can see, the chances of a Fed rate cut next month have shot up to 55%. That’s a far cry from the 1% chance of a rate cut last October. That’s when the Fed said it would hike rates twice in 2019.

This is more evidence that the Fed is set to abandon its “normalization” plan. Instead, it’s going to make Bill’s Mistake #3… Dropping rates in a panic.

Why does this matter?

The Federal Reserve cuts rates when it expects tougher economic times ahead. It does this hoping to ward off a recession. Remember, the Fed’s conventional wisdom is that lower rates will boost borrowing, which leads to more economic activity and higher stock prices.

Now that the trade war is ramping up… and the S&P 500 is down 7% from its high… it is easy to see why the Fed would want to act. But it doesn’t always work…

The last two times the Fed stopped rate hikes, only to follow up with cuts, was in 2007 and 2001… And the U.S. fell into a recession shortly after, on both occasions.

So, if history rhymes, the coming Fed rate cut will not be a good sign. It will let us know that a recession is on the way…

Businesses Rush to Serve Americans Living Alone
Companies that make household goods, like toilet paper and refrigerators, used to target families as their top customers. But now, more Americans than ever are living alone, and they have different buying habits, making businesses desperate to adapt to their demands.

Gloomy Trade War Outlook Pushes Investors to Gold
Tensions between the U.S. and China have heightened. The two countries continue to clash over trade, technology, and security. And as Bill said above, fear may be growing. Traders are now betting the Fed will cut rates sooner rather than later, leaving gold as the most viable safe-haven asset…

Why Your Car Is Spying on You
Your car knows more about you than you may realize. It knows how often you talk on your phone… how much you weigh… where you live… and where you work. In short, your car has access to droves of behavioral data. And it’s not going to keep it to itself…

Today, one reader offers his prediction for how people will react to the imminent crash, after we questioned whether the world had already passed “peak prosperity”:

The coming financial meltdown will make it almost impossible to live in any of the major cities. Crime will run rampant. Work, food, and comfort will be hard to come by. People will move to the country to be closer to food sources. It will be interesting to see how well they will be accepted by the locals. Not all of us can run to another country, but it might be time to start checking some of the rural areas away from the cities.

Meanwhile, another reader offers some insight on why he thinks our “win-win” theory doesn’t hold up…

Your theory of “win-win” is fine but impossible to be practiced by the humans as we are. Most of us know the saying, “Do unto others as you’d like others to do unto you.” Jesus used it, though he most probably had it borrowed. The original writer, nor Jesus, nor anyone of us seems to be able to realize that we (humans) have no such capacity of our minds to at least regard others as our equals, let alone put their interests first. We have a long, long way to go!

In 2016 and 2018, he picked the top-performing stocks on the Nasdaq and S&P 500… before almost anyone had even heard of them. And as an angel investor, he’s put his money into 111 early-stage tech companies… 95.3% were successful.

And Jeff’s about to make another one… four tech companies that could change the world. Tune in on Wednesday, June 12, at 8 p.m. ET, as he reveals the name of one of the companies, live and on air. Reserve your spot here. 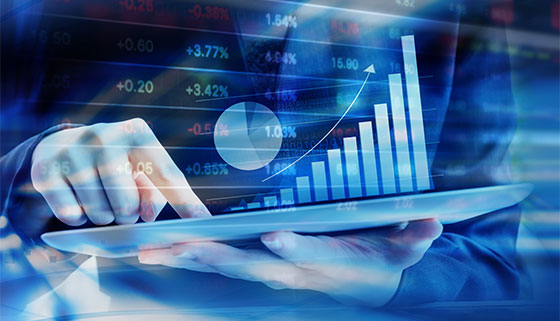