GUALFIN, ARGENTINA – A Washington Post headline caught our eye on the weekend:

At last! Our eyes lit up. Our pulse raced. Finally, the Great Disruptor was disrupting something that really matters.

It wasn’t much of a slash… just 5%. But at least the president finally had the razor in his hand.

But wait… what’s this?

The budget has little chance of becoming law because of bipartisan resistance to many of its elements, but it sets forth the White House’s vision ahead of what is expected to be a fierce battle over government spending later this year.

Even with deep spending cuts, the president’s plan would not balance the budget until the mid-2030s, two people briefed on the plan said, falling short of the 10-year time frame that Republicans have sought for years.

What a disappointment. No real cut at all. Just more political showbiz. More “us vs. them.” Conservatives against liberals.

The only way the White House could make a real cut in spending would be to propose an across-the-board cut… and bypass Congress, selling the idea directly to the American people.

The president would have to use his histrionic genius by going on TV and explaining what is really going on – that we’ve been spending more than we can afford for many years (the last real balanced budget was in the Carter Administration)… and that the real beneficiaries are the Swamp Critters, not the American people)…

…that we could defend the country with less than half the Pentagon’s budget (most of the money is used to bumble around the world, not protect the homeland)… and that if we don’t do something about it, we’ll go broke (inflation… depression… the usual calamities).

He might then be able to reach the residual common sense of the public (if there’s any left)… and overcome the resistance of the special interests, the lobbyists, the hacks, the cronies, and the Deep State elite… and actually reverse the insidious trends of the last five decades.

But wait… we’re dreaming, aren’t we?

And it will never happen anyway.

First, because Donald Trump is a Swamp Critter himself; he’s the “king of debt” who will want to keep the jig going as long as possible.

Second, because the Deep State wouldn’t allow it. Imagine how the media… the Congress… the insiders… the PhDs… the know-it-alls… would howl! (Yes, it gives us great pleasure to think about it.)

Third, because the American people have gotten used to thinking that they can get something for nothing.

The present administration is adding to the federal debt at the rate of about $3 billion per day. Trump’s budget proposal pretends that his extra debt is nothing to worry about. It forecasts growth of 3% per year. This will so enlarge the GDP, or so the argument goes, that the debt will shrink in proportion.

And why would it? The burden of debt is still growing, not shrinking. And interest rates are rising, not falling… making the debt burden heavier.

And then, as the feds become more desperate to keep the scam going, they will meddle in the economy even more, further reducing real growth rates.

The real crisis will begin, no matter which party is in power, when the stock market crashes. Then, growth rates will go negative… and federal borrowing will soar.

This will throw the White House’s convenient projections into the “round file” where they belong.

The feds will not be able to finance that $3 trillion gap without pushing up interest rates. But higher rates will sink the economy into a depression, further reducing federal revenues. So, the feds will resort to the “printing press” – aka, the Fed.

We don’t presume to know what will happen in any detail. But some trends are almost impossible to reverse. Instead, they have to run their course… all the way to the grim end.

Many S&P 500 companies expect earnings to fall this quarter…

That’s the story of today’s chart, which maps the percentage of companies in each sector that have preannounced negative earnings guidance for the first quarter of 2019.

Earnings guidance is the forecast issued by a company’s management team. It’s based on its future expectations for earnings, considering industry and macroeconomic trends.

Think of it like an early report card for how a company’s performance will look in the upcoming quarterly earnings report.

Analysts use this guidance to set realistic expectations for a given company’s near-term earnings potential. 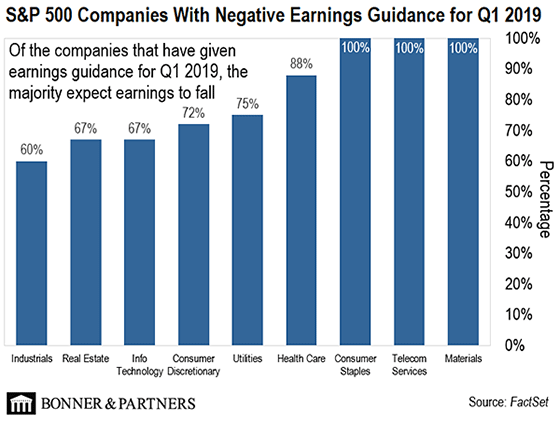 The chart shows the percentage of companies in each sector that have released earnings guidance that is negative.

And as you can see, of the companies that have given earnings guidance for this quarter, the majority expect earnings to fall.

This is just one more reason to be cautious in the market today. While this chart only encompasses the 103 companies that have preannounced earnings guidance, it could be an early signal that earnings growth is slowing.

Why Americans Don’t Cheat on Their Taxes
In the U.S., the 2019 tax filing deadline is a little over a month away. With a president that’s said dodging federal taxes is “smart,” it may come as a surprise that the majority of Americans don’t cheat on their taxes. Why is it that, according to a 2017 IRS survey, “this ethical attitude is not changing over time”?

Huawei Shows Where the Real U.S.-China Imbalance Lies
As Bill has said in the past, the Huawei Technologies debacle could have a negative impact on the Trump-Xi trade war. And the story continues… the Chinese telecom giant announced last week that it’s suing the U.S. government. It took to Twitter, saying it’s “a call for truth and justice for the good of global citizens.” The irony of it all? China’s own citizens can’t access Twitter…

This Is the First Serious Threat to the iPhone…
Consumers are holding onto their smartphones longer… the newer models simply aren’t innovative enough to compel consumers to run out and buy them. Not to mention, they’re expensive. Bill’s go-to tech expert Jeff Brown shows why the “something big” we’ve been waiting for in the smartphone world is finally here… and why that spells trouble for Apple’s iPhone.

In today’s mailbag, dear readers stick to the current beats: Trump, AOC, and the disappearance of conservatives.

Interesting comments today. Socialism may be destroying conservatism. However, there is a natural tendency through self-serving greed to shift power and money back to those who have it. As many of your letters speak about, the elite has gotten much richer in recent years, and we seem to be reverting back to a feudal state, which, in turn, gives rise to popular politicians like Bernie Sanders, or AOC.

Some of your dear readers objected to you calling Trump what he is, but you’re right, and he did appeal to (and used) the masses to serve his own financial interests.

It is shocking to me that there are so many readers who support Trump. He is a bull in a china shop (no pun intended).

Correct me if I’m wrong but isn’t capitalism the process by which individuals – in a competitive environment – create and distribute wealth? Socialism, on the other hand, is the process whereby governments – in a non-competitive environment – attempt to do the same thing. Both systems need capital but, of the two, socialism has failed abysmally wherever it’s used, now and in the past. Why, therefore, do politicians who have never produced any wealth, peddle a system that’s never worked?

AOC is absolutely correct. Climate change cannot be ignored. As an ex-Republican, I’m thoroughly disgusted with my party, which is infested by a bunch of pathetic little clones of the most ignorant and self-adoring, so-called “president,” since the days of Caligula and Nero.

Meanwhile, the conversation turns back to Bill and Argentina. But, has our editor become “exceedingly pessimistic and dark”?

I love the story of Bill having fun in rural Argentina and appreciate the photos. A word of warning – he may consider installing a roll bar on his tractor, since working tractors do occasionally flip and can crush the driver. A word of advice – next time, he may consider purchasing a farm in a rural part of the Midwest. There, they don’t usually travel offroad by horses but rather, by ATVs.

The locals living off the grid are just as eclectic. You can find areas that are somewhat isolated. You don’t have to worry about the originarios claiming your property. Traveling to the property is a lot more convenient from Baltimore, Ireland, France, etc., and some areas even produce their own wine. (Ok – the wines aren’t that good but a convenient liquor store is generally available an hour away by car.) All the best.

I have been reading and enjoying your musings for many years. But lately, you have turned exceedingly pessimistic and dark in your observations. Yes, no 11-year-old can know the future. Neither can you or anybody else. Buffett’s demonstration is as valid as your Dow-to-gold model. Both are based on the past and may or may not repeat in the unknown future. So, do lighten up. You are coming into my years (79); don’t forget to smell the roses along the way.

For the first time ever, Casey Research founder, Doug Casey, is revealing a revolutionary way to make huge money from gold… even if the price falls.

Timing here is key… the next run-up could very well start today. Read on here. 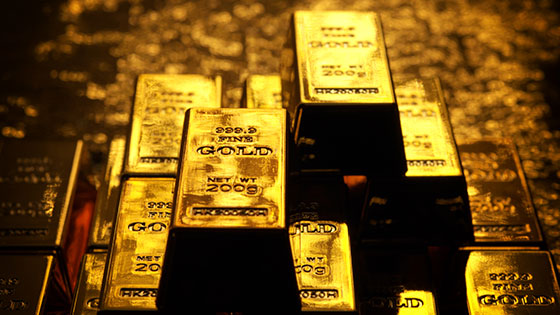