YOUGHAL, IRELAND – The markets seemed to hold their breath… still, like dead leaves before a hurricane.

Jim Cramer, of TV’s Mad Money, says we’re waiting to see if the EU “caves” in Donald Trump’s trade war. Then, he says, the market will go much higher.

Other reports say the market is waiting for more earnings announcements.

More likely… money has been upstaged.

And what a show it is. Audiences laugh. They cry. They renew their passports and look for sharp objects or open windows.

Something remarkable is happening; the American public is cracking open… dividing itself into hostile camps, with Donald J. Trump as the wedge. Some of them hate him. Some love him.

For the haters, he can do no good. If he achieved peace in the Middle East, prosperity at home… and built a Trump hotel on Mars… they would still see no good in the man.

If he caused the blind to see… the lame to dance… and walked across the Potomac barefoot, they would suspect a trick.

They have nothing but contempt for the man and all he represents – crassness, stupidity, ignorance, TV, golf, gaudy buildings, celebrity culture, and in-your-face wealth.

If he were to die tomorrow, they would breathe a sigh of relief, cross themselves as if they had been spared by the Virgin Mary, and look forward to the next election.

For the Trump lovers, on the other hand, he can do no wrong. He is their man. They are his. He is their shepherd. His battles are their battles. His victories are theirs, too.

But theirs is the bigger challenge, too, for they have to reconcile the real world with the Trump world.

And there is Mr. Trump himself, contradicting, backpedaling, and denying the very affirmations they took as gospel only a day before.

One day, they are told that Mr. Putin and his minions would do nothing to sully the pristine U.S. election process.

The faithful barely had time to assimilate that doctrine when a new one was announced: Yes, the president believes his top men in the intelligence agencies. Russia did interfere in the 2016 election.

Quickly turning their heads to face the newfound foe in Moscow, Trump’s true believers are then rocked again, when their hero claims he never said that.

Six days ago, President Trump held a news conference to walk back comments he made suggesting that he did not believe that Russian President Vladimir Putin oversaw a plan to interfere in the 2016 presidential election.

“Let me be totally clear in saying that – and I’ve said this many times – I accept our intelligence community’s conclusion that Russia’s meddling in the 2016 election took place,” Trump said in that statement.

Trump then said he realized, after seeing the backlash to his news conference, that one statement needed clarifying. That’s when he offered his now-infamous “double-negative” defense. “In a key sentence in my remarks, I said the word ‘would’ instead of ‘wouldn’t.’… The sentence should have been, ‘I don’t see any reason why it wouldn’t be Russia.’ Sort of a double negative.”

But on Sunday, he suggested that the investigation was “all a big hoax.”

But as Mr. Trump himself put it, he could kill someone dead on Fifth Avenue, and still, his supporters would stick with him.

He stumbles and bumbles along – and they see a genius with a plan. And when he undermines the “conservative” principles and institutions that they hold most dear… they insist it is fake news.

Each group has its own source of information, opinion, and advice – thanks largely to the new electronic media.

Thanks to algorithms and machine learning, Google and Facebook know which version of “fake news” you want… and they make sure you get it.

Each group has its hopes, night terrors, and fantasies… teased and elaborated by a circus media…

And each regards Mr. Trump either as its Savior… or its Antichrist.

When Trump was elected, we expected that he would end up setting up a new political party. We called it “Trumpismo.”

The old-fashioned Republicans, we reasoned, would discover that he was an imposter – not a real conservative – and reject him. He would have to go off on his own political movement – much like Macri in Argentina or Macron in France.

Instead, Trump was able to attract and retain such an enthusiastic group of fans within the Republican ranks that no traditional conservative dared to defy him.

They buckled and bent… and the most anti-Trump among them – such as Senator Jeff Flake – announced their retirement.

The Trump faction became critical to winning in the primaries. And even incumbents despaired of facing the ire of the Trumpistas.

The Republican Party became the Party of Donald Trump, and the old Republican stalwarts, such as George Will, saw no other solution. “Vote the Republicans out of office,” they recommended.

As for Mr. Trump himself, he understood better than anyone how to whoop up his “base”… and how to use the techniques of reality TV and the wraslin’ genre to keep the seats filled.

His political philosophy, as near as we can fathom it, falls not far from the tree of the man himself. Millions of words have been written trying to decipher his plans and his programs. We have probably written 100,000 of them ourselves.

But most have been a waste of time. He is sui generis – at least in America.

In Latin America, the phenomenon is better known, as we will see tomorrow.

Bitcoin – the world’s first cryptocurrency – is once again showing signs of life.

That’s the story of today’s chart, which tracks bitcoin’s price from July 2017 through today. 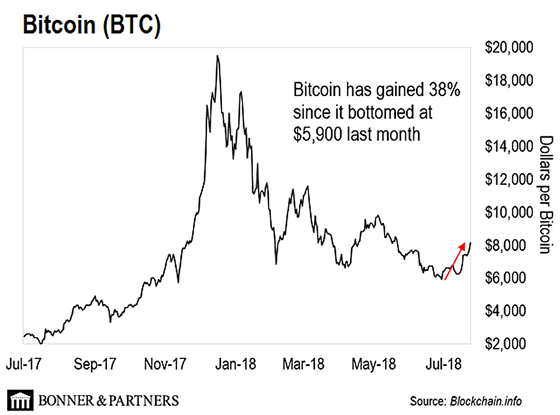 This month’s big move came after the Chicago Board Options Exchange (CBOE) filed an application with the Securities and Exchange Commission (SEC) for a bitcoin ETF.

What’s more, the CBOE will maintain insurance coverage on the ETF to protect against the loss of bitcoin through theft, fraud, destruction, or transfer problems. That would allow for large, institutional funds to take sizeable positions in bitcoin on behalf of their clients.

This is big news.

A bitcoin ETF would make buying bitcoin as easy as logging into your brokerage account and pressing the “buy” button. This could open the digital asset up to a wave of capital from investors who otherwise would not invest in bitcoin due to its complexity.

P.S. Cryptocurrency expert Teeka Tiwari recently went on record as saying that he believes bitcoin could hit $65,000 by the end of the year.

If you listen to the mainstream press, you might think that’s impossible. But Teeka has uncovered something that the financial press isn’t reporting. And it could cause investors to miss out on the biggest gains in the crypto space yet. He calls it “The Great Crypto Conspiracy of 2018.” To make sure you don’t miss out, get all the details from Teeka right here.

Debt: How the Economy Booms
The American economy appears to be in good health. Growth for Q2 is expected to clock in at 4.5%, and unemployment is at its lowest level in decades. But behind the rosy numbers is the dangerous source of America’s economic boom: more debt… and less savings.

Buffett Is Wrong About Bitcoin
Super investor Warren Buffett recently said bitcoin was “rat poison, squared.” Cryptocurrency expert Teeka Tiwari acknowledges Buffett as a master of value investing. But when it comes to cryptos, Teeka thinks the Oracle of Omaha is dead wrong…

The Exaggerated Gig Economy
Much ink has been spilled by those writing about the so-called “gig economy” – the tendency for people to look for part-time gigs as opposed to steady employment following the Great Recession. But according to new data, the gig economy might not be all it’s made out to be…

In the mailbag, Bill’s recent comments about President Trump ruffle some feathers…

Are you really as vengeful, vindictive, and mean-spirited as you come across in your constant barrage of condemnation of our sitting president? Whether you like him personally or not, Donald Trump was voted into the highest position in the land. And that position, if nothing else, deserves respect!

I and most of my many friends and associates thoroughly disliked Obama and his cohorts, but no one dished out a never-ending spew of vitriol about them, as you continue to do against President Trump! It’s really tiresome. Most don’t bother reading it now – being totally aware that it’s the same insane insults as yesterday from a skewed mind! Give it up, for goodness’ sake!

If we could just get rid of the likes of Ryan, McCain, McConnell, Gram, Banks, etc. – these two-faced people are more about filling their pockets than doing what’s right for the American people and its country.

Apparently, they haven’t been following the Mueller witch hunt. Mueller has proven to the American people that Obama and Hillary have corrupted the FBI, CIA, IRS, DOJ, and just about every agency in D.C. Don’t you pay attention!

Trump is no reformer, although he knows how to play to his “base” – the hopeless saps who have been divided against each other by Sean Hannity, the billionaire Rupert Murdoch, etc. Wait until Sinclair Media puts its own version of local stations all strung together to the right of Fox. Divide the $80,000-a-year against the under-$40,000-a-year people while the 0.1% gain the biggest share of wealth since just before the Great Depression. But I digress…

Do you have any doubt that Russia hacked into our elections and had an effect on our elections? Do you want that to happen? That troubles me greatly. Do you care? Or is “no collusion, no collusion” your mantra as well? There doesn’t have to be collusion to break the system. And unless you’re like Doug Casey and don’t vote, because doing so furthers a criminal enterprise, then you may as well move to some unregulated place like Iraq or Somalia, where you can hire your own army.

If people lose confidence in voting, then the electorate shrinks to the basest level. I’m not sure Mrs. Clinton would have been any “better,” but Mr. Trump is one of the crassest, crudest occupants of the White House since Andrew Jackson (at least JFK and Clinton had some manners). His scheme for self-enrichment as president knows no bounds.

I’d like Bill to address another question, as long as he’s entertaining wacky theories: If Trump was a paid agent of the Russian government, what would he be doing differently?

To join us for our first-ever Legacy Investment Summit during October 17–19, 2018 in Bermuda.

This is our largest conference ever – and the speaker list will blow you away. And if that’s not enough, the location is a true vacation destination, with every amenity at your fingertips. Click here for details…