DELRAY BEACH, FLORIDA – Americans seem to be getting on board the “tax the rich” train faster than they can sell tickets for it.

We thought it would take at least a couple of years… and a recession… to bring them around.

Envy is readily disguised as “virtue signaling,” and larceny is easily confused with reducing “inequality.”

And now, rich people are the new pariahs. Behind every one of them is a crime, the liberals say; and if it’s not a crime now, they’ll make it one.

Rep. Alexandria Ocasio-Cortez (D-N.Y.) and her Republican critics have both called her proposal to dramatically increase America’s highest tax rate “radical,” but a new poll released Tuesday indicates that a majority of Americans agrees with the idea.

In the latest The Hill-HarrisX survey – conducted Jan. 12 and 13 after the newly elected congresswoman called for the U.S. to raise its highest tax rate to 70 percent – a sizable majority of registered voters, 59 percent, supports the concept.

And polling shows that Americans are warming up not just to tax hikes, but to the rest of Ms. Ocasio-Cortez’s programs, too.

For the first time in Gallup’s measurement over the past decade, Democrats have a more positive image of socialism than they do of capitalism.

As for ourselves, we have mixed feelings. A war between the haves and the have-nots seems to be coming. Our guess is that both sides will lose.

Which is okay with us; we don’t like either of them.

But claptrap annoys us. And we prefer an honest stick-up man to a slick embezzler. Give us a tax increase over deficit financing; at least we’ll know what’s going on.

And now, there’s no doubt. The rich are on the table. And all leading Democrats are getting out their knives and forks.

As U.S. Democrats lay the foundation of their bid to unseat President Donald Trump in 2020, raising taxes on the rich is emerging as a central theme for a party being pulled to the left by its invigorated progressive wing. Spurred on by the social media-fueled phenomenon of Alexandria Ocasio-Cortez, the youngest woman ever elected to the U.S. House of Representatives (and so young she can’t seek the presidency herself), other Democrats planning or considering a run are producing a bevy of proposals for how to draw more money from the most affluent. Ideas include a “wealth tax” on assets, much higher marginal rates on big annual incomes and a new tax on financial trades, all in the name of raising more money for new government programs while making a dent in rising inequality.

When we first mentioned the proposal from AOC to raise the top tax rate to 70%… many of our dear readers gasped in horror: Socialism!

Trotsky in drag, disguised as a young woman from Queens! Doom must be right around the corner. They were right, of course.

Doom is around the corner. But not because of Ms. Ocasio-Cortez and her tax hike.

When the insiders get finished with it, the new tax will raise pitifully small amounts of money. And most rich people will dodge around it. That’s what they pay the lobbyists for.

The new tax will not alleviate inequality, either. The rich will still be rich. And the fake money system that magnified their wealth so remarkably will still be intact.

The serious decisions are made by the insiders. It doesn’t matter what “the people” think… as long as they don’t threaten the Deep Staters who run the system.

Ultimately, the feds spend, directly, about 22% of GDP. They control, manipulate, or heavily distort another 20% (when you pay a tax preparer, for example, it is counted as a private sector expense; but it’s actually a cost of government).

The money has to come from somewhere. Traditionally, the liberals want to “soak the rich.” The “conservatives” want to soak the middle classes (no point in bothering with the poor; they don’t have any money).

And the Deep State – insiders, cronies, and the elite who actually run the show – don’t care who gets soaked as long as the honey keeps oozing in their direction.

And there’s the doom. Over time, more and more real output is twisted, bent, and corrupted to pay off the elite. Worse, the old leashes – common sense, fair dealing, limited time and resources – are slipped; claptrap runs wild.

Then, people think they can live at each other’s expense… and get rich by spending money none of them ever earned.

Tax increases, like tax cuts, are just part of the scam. The December 2017 tax cut pretended to boost the economy; the next tax hike will pretend to sock it to the rich.

Who wins? Who loses?

The beat goes on… the parasites grow bolder… and the real economy weakens.

Today’s chart maps the S&P 500 from the start of 2018 through today… and it looks eerily similar to the pattern we saw just before the market crashed in 2008. 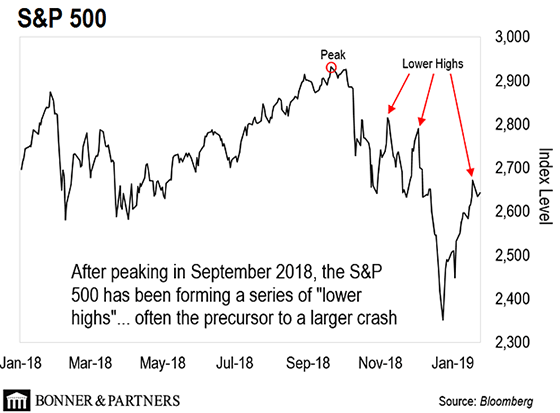 As you can see, the S&P 500 has been forming a series of “lower highs” since the market peaked last September.

A lower high occurs when stocks fall and then fail to reach their previous peak during the next rally attempt. When we see a series of lower highs like this, that tells us the market is losing steam… and that we are moving into a bear market.

What’s more, this setup is often the precursor to a larger crash.

But then the big crash hit.

The S&P 500 plunged 36% over the next two months, from September 19 to November 20 – making that the most destructive two months of the entire bear market.

Had investors gotten out before that big crash, they would have preserved the bulk of their investment gains from the previous bull market.

Chart patterns aren’t our usual beat for Market Insight. But during times of heightened volatility, short-term charts can give us an insight into the emotions of investors.

A chart of a stock (or index) is simply an emotional picture of the stock at a specific moment in time.

Stock charts tell me how traders/investors are responding emotionally at any given point in time. Human emotions are remarkably consistent. We tend to respond the same way, over and over again, to the same circumstances.

So, if I look at a chart, find a time where the conditions were similar to where they are today, and note how the chart behaved afterwards… it can provide strong clues for what to expect in the future.

And that’s why we have been urging caution, despite the sharp snap-back rally we have seen since December.

If history rhymes, the S&P 500’s recent activity seems to confirm the onset of a new bear market. And it is a subtle warning that the big crash may be at hand…

Who Owns All the Stocks?
The U.S. stock market has changed immensely over the decades. How? In 1945, nearly all of U.S. stocks were owned by households. Today, that’s all changed…

Facebook’s “Friendly Fraud”
Facebook, the embattled social media giant, finds itself embroiled in another scandal. The highlights: The company tricked children into spending hundreds to thousands of dollars of their parents’ money on online games. It calls it “friendly fraud.”

Double Your Money When the Crash Comes
Most investors will be wringing their hands during the next big drop. But master trader Jeff Clark is ready… That’s because he’s developed a strategy that can double your money again and again when the market panics. Here’s how.

What went wrong in Venezuela? In the mailbag, dear readers weigh in…

Yes, Venezuela, was a rich country, and the only democracy in South America. But the wealth was in the hands of an elite of European ancestry, while the indigenous population lived in tin-roofed shacks, with no electricity and water. As for Chávez, he was a megalomaniac, not a serious reformer.

I often agree with Bill’s perspectives. However, I believe he is overlooking the fact that the global powers-that-be are extremely frightened of any successful progressive examples elsewhere, which other countries may be tempted to soon follow. Is Mr. Bonner suggesting here that the global powers have not meddled in Venezuela’s affairs? What is inherently wrong with a country sharing the wealth of its natural resources with the people, as opposed to with corporations primarily owned by the wealthy? Related, is it possible that oil/gas prices have been kept artificially low these past few years to punish perceived threats/adversaries such as Venezuela and Russia? Hmm…

Your comments on Venezuela lack objectivity! The drug money that you talk about – would that be the product the Colombians produce that is not intercepted by the seven U.S. bases in Colombia, or that is provided by Álvaro Uribe, whom the U.S. government has supported for years?! The real culprits of Venezuelan inflation are the U.S. blockades and illegal sanctions. Get real and tell the truth!

So you think Venezuela’s problems have always been internal? Are you kidding? Do you live in a vacuum? A great deal of its problems, as well as those of many other countries around the world, are the result of U.S. hegemony via sanctions of one kind or another. Since World War II, the U.S. has interfered in over 80 sovereign countries’ elections, and overthrown over 50 sovereign governments around the world… and obviously has no intention of stopping.

Things could have always been worse. If Chávez didn’t think Cuba had the finest medical facilities and most skilled doctors, he still might be screwing up the country on his own… and he was undoubtedly a better snake-oil salesman than his successor.

This is a great article. I find it amazing that Democrats believe more government will bring contentment. Government is an evil entity, and has been since absolute rulers were running everything, and even before that. Study the French Revolution and how the leaders then became the victims after they ran out of nobles to behead. Have these people never heard of Pol Pot? I just can’t believe the media adoration of Ocasio-Cortez.

Most investors won’t be. But there is a way for investors to not only survive, but thrive when the bear market hits. Use this strategy to double your money again and again while most investors are losing their shirts. Full story here. 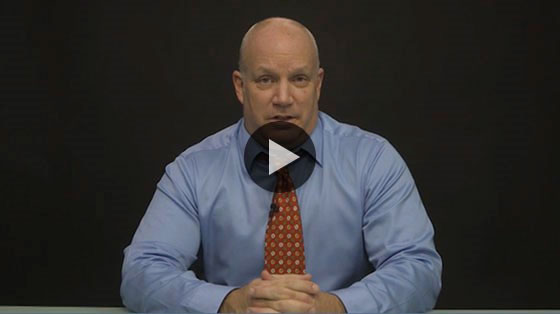