YOUGHAL, IRELAND – Word on the street yesterday was that stocks were going up to record highs “on earnings.”

The casual listener was invited to believe that corporate America was earning more money; therefore, it should be worth more. Why else would people pay more for stocks?

Earnings come from Main Street. With hard work and luck, products and services are made and delivered. Wages are paid. Profits are what you have left over. If profits are rising, the economy must be doing well.

But where are the earnings?

River of No Returns

Our old “river of no returns” stock, Amazon, for example, earned some $10 billion last year. Not bad.

But those earnings don’t come close to justifying a market cap that is edging close to $1 trillion. On those numbers, a buyer would have to drift downriver for almost a century to get his money back from earnings.

Even at today’s artificially low rates, banks are advertising 3% interest on CDs. You only have to wait 33 years to earn your money back… without the risk of owning one of the flakiest companies on Wall Street.

AMZN may be an outlier in many ways. So, let’s look at the entire market.

In the first quarter of 2012 – seven years ago – U.S. corporations made a total of $2.2 trillion in pre-tax profits (annualized). In the last quarter of 2018, corporate earnings (again annualized) toted to only $2.18 trillion.

And that was way below the $2.32 trillion of pre-tax profits set in the third quarter of 2014.

In other words, corporate America is not making more money – at least, not by selling goods and services. And the Main Street economy hardly seems to be booming.

As far as we know, there has been no appreciable change in wages or GDP growth rates. And inflation is so quiet and lifeless, it was pronounced dead.

First, corporate buybacks reduced the number of shares; this didn’t increase corporate earnings, but there were fewer shares to share them. Naturally, earnings per share rose; share prices rose, too.

According to Goldman Sachs, net buybacks averaged $420 billion annually over the last nine years – by far the biggest source of demand in the market. Net, average annual demand from households, mutual funds, pensions funds, and foreign investors was less than $10 billion each.

Second, the tax cut at the end of 2017 favored corporations and their owners. The tax savings fell to the bottom line… and then could be distributed to shareholders, managers, workers, or consumers either through “special dividends,” lower prices, higher wages, or the above-mentioned buybacks.

Third, the feds pumped “stimulus” into the economy in the form of “quantitative easing,” negative real rates, and deficits. It didn’t stimulate the economy, but it was catnip to Wall Street.

Let’s look at each of these things more closely.

1. Reducing the number of shares outstanding should increase the value of each one remaining. But it shouldn’t have any effect on the total value of the stock market or on the P/E (price to earnings) ratio.

Go back to 2012. Stocks and GDP were about the same – at around $15 trillion. Now, stocks are worth $30 trillion and GDP is only $20 trillion. Prices rose three times faster than GDP. Share buybacks don’t explain that.

2. Most serious observers regarded the unfunded tax cut of 2017 as irresponsible. The feds were already spending far more than they took in in tax revenue. But rather than cut the fat, they went directly to the ice cream shop, and ordered the Cardiac Royale, with three big scoops, smothered in chocolate sauce.

The tax cut did little for Main Street but it added sugar to the corporate world. After-tax earnings are higher. And corporate stocks should be worth more, right?

But wait. Where did the money come from?

It has to come from somewhere. We’ve seen that “stimulus” measures are frauds and scams. They only result in more debt. In this case, the feds borrowed more money so taxes could be reduced. And eventually, somehow, the debt will have to be reckoned with… by the workaday, common people of the Main Street economy.

Uh… well… there, you see the problem as well as we do. These are the same people who buy corporate products. Now, they will have less money to spend. Corporate sales and profits should go down as a result.

3. Finally, we come to the real cause of high stock prices.

In the pseudo emergency in 2009, the feds panicked. They cut rates and borrowed heavily. Then, 10 years later, the Fed – which had been cautiously returning to a “normal” monetary policy – chickened out.

In the fall of 2018, stock prices had begun to sink. But the Fed couldn’t bear the thought of a correction… neither of the stock market, nor of the economy. It let investors know that it still had their backs… and that it would continue to lend money at real rates close to zero, perhaps forever.

And so you see. Stocks may be up. But not “on earnings.”

U.S. debt as a percentage of gross domestic product (GDP) has skyrocketed in recent years…

Today’s chart tracks U.S. government debt-to-GDP from 1970 through the end of 2018. This ratio compares how much a government owes to how much the national economy produces.

The higher the debt-to-GDP ratio, the more difficult it will be for a government to pay its debts without harming economic growth. 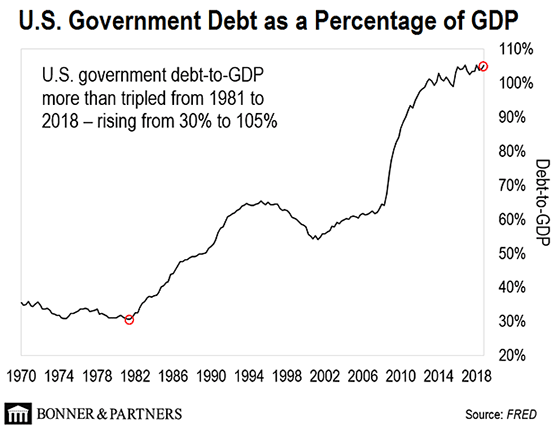 That means the U.S. government now owes more than the U.S. economy produces. And as Bill noted this month, federal debt is increasing at twice the rate of GDP… which guarantees that the debt-to-GDP ratio will move higher from here.

To be clear, the U.S. government is not at risk of default. That’s because its debts are denominated in dollars… And Uncle Sam can create as many new dollars as he needs.

If that study is correct, economic growth in the U.S. will be hamstrung by the feds going forward.

More Trouble Ahead for Elon Musk & Co.?
As Bill said above, stocks may be up, but not “on earnings.” And while the rest of the market cheers, Elon Musk & Co. face harsh criticism. The CEO of Tesla brought out the bears after reporting a loss far wider than analysts had expected. The electric vehicle maker has already burned through $1.5 billion in cash this year. And one Wall Street firm is claiming Musk is in the “Twilight Zone”…

U.S. Jobless Claims on the Rise
The number of Americans filing for unemployment benefits is on the rise. In fact, jobless claims weren’t this high since late 2017. Could it have to do with a looming bear market? Or proof that “stimulus” is just simulating a better economy? According to economists, no. It’s just a pre-holiday trend…

This Man Beats Wall Street “Whales” at Their Own Game
While trading algorithms aren’t our usual beat at the Diary, Jason Bodner is the 20-year Wall Street veteran who executed multibillion-dollar trades for the world’s largest funds. And as he gives you a look under the hood, you’ll see how he can spot the fastest-moving stocks up to 30 days before they pop…

Today, a handful of responses to Tuesday’s Diary, “Should Jesus Have Gone to College?” Should our editor “pick on someone his own size?”

Great write-up on the value, or should I say the lack, of a college education. Our so-called education system’s purpose is no longer to educate but to enslave via debt. And besides, do you know what you get when you educate an idiot? An educated idiot!

“Imagine that you had studied under one of the greatest economists of the 20th century, Paul Samuelson, a Nobel Memorial Prize winner. Or another Nobel-winner, Paul Krugman. You might as well have studied surgery under the Boston Slasher or ethics under Heinrich Himmler. Neither Samuelson nor Krugman ever understood how an economy worked.”

Hey c’mon, pick on someone your own size.

I found that sending my dogs to obedience school, my money was much better spent than sending kids to college. The kids all came out of college as communists looking for a handout. My dogs still love me.

As the late great Frank Zappa said, “If you want to get laid, go to college. If you want an education, go to the library.”

Why would Jesus, if he existed? If I say. Why would a holy man, who’s pure, want to be corrupted in his clean heart and mind by secular democratic anti-God colleges. And he would be crucified by the professors. He would have to speak judgment on their institution.

Meanwhile, other readers talk Soviet Russia and the degeneration of American capitalism…

The essay describing life in the USSR was outstanding and accurate. However, for today’s lazies, there might be a much simpler way to obtain the truth necessary to penetrate their cement heads. Rather than read books, articles, or other accounts of history and economics (which would be fine), how about having them spend whatever time their attention deficit disorders will allow and actually talk to anyone who lived under these systems in eastern Europe?

It shouldn’t be that difficult to find a Hungarian, Pole, Czech, Slovak, Russian, Ukrainian, Romanian, or Bulgarian, should it? The difficulty might lie in actually believing the words of wisdom these folks can offer. With the aid of a modern university curriculum, I’m quite certain they would be able to connect the dots… And I just bought an ice cream factory in Nome, Alaska, too!

Sure, capitalism is broken. But look at the miracle of socialism in Venezuela. People are hungry, Richard. For all its good, capitalism evolved into great disparity in haves and have-nots. It also is trying to “mother” more than half the population, which pays no net tax. If capitalism degenerates into what we have today, imagine the depth the socialism will take us.

The biggest flaw in reasoning in the Lefties’ camp is having the inability to understand that we need first and foremost to give people possibility to have a job. And the most of real jobs are there because of the business-minded individuals who sometimes risk a lot, in order to succeed. The byproduct is jobs. Lefties are usually not in this camp of people, who know what it takes to bring the cake to the table. They claim that they “know” how to divide the cake, “justly.” They actually demand that role. No, I am not a businessman, err person.

He unveiled his own breakthrough trading system, which can spot the market’s fastest-growing stocks up to 30 days in advance. (In fact, it’s already identified a small tech company in the 5G space that could be a triple-digit winner in just a few months.)

If you want to see potential returns as high as $9,385 in one trading day, there’s still time to get access to his trading system. But, act fast… this is for a limited time only. Read on here. 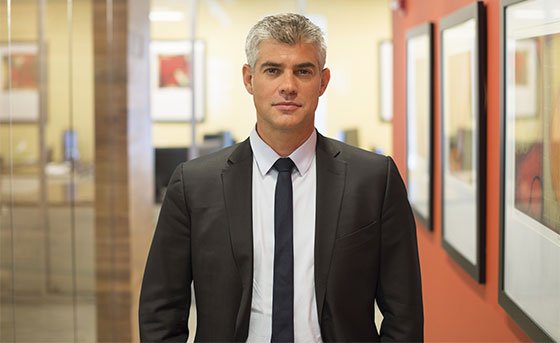