YOUGHAL, IRELAND – “The only way that people really improve their wealth is by buying a house, condo, whatever it may be, owning shares of stock,” says Mark Cuban.

He was on Yahoo! Finance addressing the issue of inequality of wealth, which many people consider a problem.

But the analysis was bad; the advice was some of the worst we’ve ever heard.

But first, let’s check the news. Stocks managed a decent showing for a third day in a row after a story circulated late on Thursday that the Mexican tariffs might be delayed.

The world economy, however, still seems to be weakening. Bloomberg:

German industrial production plunged the most in almost four years in April and the nation’s central bank gave a gloomy assessment of the outlook, highlighting an ongoing slump in Europe’s largest economy.

German factories are at the heart of Europe’s slowdown, as trade tensions, weaker car sales and cooling global demand weigh on exports. The 1.9% drop in output was the biggest since August 2015 and follows a survey this week showing that manufacturing probably still contracted in May.

And in the U.S., this again from Bloomberg:

Here’s one consequence of the slowing U.S. housing market: Home flippers are heading for the exits.

Homes that were resold within 12 months after being purchased made up 7.2% of all transactions in the first quarter, the biggest share since the start of 2010, Attom Data Solutions reported Thursday.

Meanwhile, the average return on investment, not including renovations and other expenses, dropped to 39%, an almost eight-year low.

Speculators are on the housing market’s front lines, where softening price growth, waning demand and longer times to sell can turn quickly into shrinking profits, or even losses. Purchases of previously owned homes fell 4.4% in April, the 14th straight year-over-year decline, according to the National Association of Realtors.

“Investors may be getting out while the getting is good,” Todd Teta, chief product officer at Attom Data Solutions, said in the report. “If investors are seeing profit margins drop, they may be acting now and selling before price increases drop even more.”

As the economy softens, the feds prepare to make their next mistake.

Recall that monetary policy is really just a series of mistakes.

First, they keep rates too low for too long – thus creating a dangerous bubble.

Second, they need to raise rates to engineer a “soft landing.”

Third, and finally, when the stocks crash, they cut rates in a panic, leading to another bubble.

Over time, the distortions increase (which we can measure as debt… up $20 trillion in the last 10 years), thus creating the need for bigger and bigger mistakes to overcome Mr. Market’s longing for a correction.

We are now, apparently, at the tippy-top of a giant bubble that the feds created after the panic of 2008-2009. This time, they added some $12 trillion in monetary and fiscal stimulus, not to mention negative real lending rates during almost the entire time.

This produced the weakest recovery ever – with trailing 10-year GDP growth rates only about 1.5% – barely half the rate of the late 1990s. And it sent all the key, traditional relationships into bizarre and unhealthy territory.

Yesterday, we looked at the relationship between household wealth (based on asset prices) and GDP. For half a century, the ratio was about 3.8-to-1. Now, it’s 5.35-to-1 – a record.

There is also a traditional relationship between the stock market and GDP, which Warren Buffett uses to tell when stocks are overpriced.

Here again, this is not an arbitrary number. There’s a natural relationship between the economic output (GDP) and the enterprises that produce it (in this case we use the Wilshire 5,000).

Again, for half a century following the end of WWII, the ratio – Wilshire stocks/nominal quarterly GDP – ran around 50%. Today, it’s 133%.

Another traditional relationship worth looking at is time (labor) compared to stock prices (capital). And here, too, we see the same pattern.

Wages went up. Stocks went up. GDP went up. But the relationship held fairly steady.

Then, after 1995, time got cheap while stocks got dear. In the following five years, the price of the S&P stocks rose steeply. By the end of the 20th century, it took the average worker 100 hours to pay for them.

That is why we have “inequality” in the U.S. The feds pushed up prices for rich folks’ assets… but not for the common man’s time. Most people – who have nothing but time to offer – are relatively worse off.

But as Berkshire’s Charlie Munger points out, this is a problem that will take care of itself.

The feds can manipulate and control… but only to a point. They may or may not be able to stifle the coming correction. But they can’t command the tides.

And now Mr. Cuban urges the working man to step up and buy stocks at four times (in terms of labor hours) what they cost in the early 1990s.

And from whom would they buy them?

Researchers from Samsung and the Skolkovo Institute of Science and Technology used artificial intelligence (AI) to create a talking Mona Lisa.

To do this, all they needed was a single image of the painting.

To animate the talking head, they took an existing video of somebody speaking and mapped the face. They combined that with the Mona Lisa image to generate the movements… And then they refined it to the point where it became realistic.

This is amazing. AI took a single image of Mona Lisa and brought her to life.

Imagine the educational applications. We could take historical figures, say George Washington or Abe Lincoln, and animate their speeches.

This would bring history to life for students. And make learning more interactive and real.

But there is a downside…

If you didn’t know any better, it would look like the talking Mona Lisa was real. It’s very convincing.

And that means this technology could be used to manipulate people and make divisive actions even more powerful.

For example, this could be used to create a fake speech from any politician and put it out on social media. Or it could be used to frame or defame any individual, regardless of whether he is a public figure. That’s a disturbing thought.

And one more detail: The research lab that produced this video is in Moscow. Given the Russian government’s penchant for spreading “fake news” over social media, this development should give us pause.

And keep in mind, this is not expensive technology. AI is just software. And once it’s out there, it’s out there. To create your own talking head, all you need is the software, an image, and a voice recording. That’s it.

To be clear, as a technologist, I know that AI will also be used to accomplish great things. It will find cures for “incurable” diseases. It will deliver limitless energy and help make space travel as common as traveling by plane.

But what this story tells us is that AI can be used for good or bad.

And our ethical choices as a society will be the biggest issue over the next 30 years.

P.S. Technology is progressing at an exponential rate. Artificial intelligence isn’t decades away. It’s happening right now. In a few years’ time, it will be as commonplace as owning an iPhone or using the internet. We’ll wonder how we ever got along without it.

And of course, the investment implications are enormous. Fortunes will be made. Smart investors stand to make 10 times their money, at least, as this mega-trend plays out. I’ll tell you everything you need to know next Wednesday, June 12, at 8 p.m. ET, during my free technology investing summit. Go right here to reserve your spot.

Are Fed Rate Cuts Needed to Support Growth?
The Fed has been urging that the economy is “solid.” But, Fed Chair Jerome Powell says he remains open to lower rates… only if needed. And he’s starting to get support from other policymakers to make that “if needed” rate cut…

How to Handle Big Tech
Breaking up Big Tech has been a hot-button issue for politicians on both sides of the fence. The goal is to help competition, and give the smaller guys a chance to play ball. But some are arguing that taking down Big Tech will hurt the startup companies just as much…

Your Car Is Spying on You
Your car knows more about you than you realize. It knows where you live… where you work… and how much you weigh. Tech companies are hungry to get that data. And they have figured out a way how…

Today in the mailbag, a dear reader suggests an alternative to Donald Trump’s plan to stop illegal immigration…

You wrote, “The Donald is taxing Americans to force the Mexicans to protect the U.S. border. But if the U.S. can’t stop people from sneaking across the Rio Grande, how is Mexico supposed to do so?” Isn’t Donald handicapped by Democratic, and some Republican, opposition to a reduction in the flow of illegal immigrants across the border? He can deny entry to them, but if they successfully sneak across, he is almost powerless to remove them. What then can he do?

I guess he thinks that by hurting Mexico with tariffs, the Mexicans can be induced to prevent would-be migrants from reaching the U.S. border. One possible way to do that is to use the Mexican military to prevent migrants from crossing the isthmus between the gulf and the Pacific, which is only about 130 miles wide through Veracruz and Oaxaca. That sounds a lot easier than trying to stop migrants from crossing the U.S. border, which is almost 2,000 miles long. That may not be the plan, but it sounds a lot better than trying to seal the U.S. southern border.

Meanwhile, one reader thinks that Modern Monetary Theory (MMT) is a lot older than people realize…

Bill, it seems to me that “Modern Monetary Theory” has been practiced since 1971, but they just got around to applying a name to it. We had Vietnam, our present conflicts, the great society, modernizing our military and all the free stuff we have now. I am of your vintage, and as you will remember, it started off slow with free food. Who could be against feeding the hungry? Then free housing, free utilities, free cell phones and tax refunds to those who pay no tax, etc. Since 1971, the mighty dollar is worth about 5 cents. We are very much like the frog in a pan of water that is gradually being heated!

Bill’s go-to tech expert, Jeff Brown, has agreed to pull back the curtain on four early stage technologies that could change the world…

On Wednesday, June 12 at 8 p.m. ET, Jeff will reveal all the details during his first-ever “Early Stage Tech Summit.”

He’ll also reveal the four small-cap tech companies that have the potential to 10x your money. You can attend, for free, by reserving your spot here. 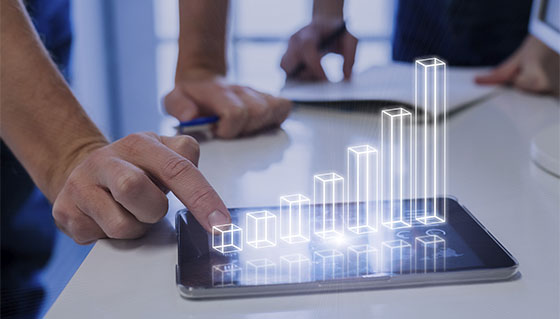