PARIS – Last week, it was war with Europe. This week, it’s bombs over Toronto.

Plans are being drawn up for two walls. One across the southern border to keep Mexicans out. And one across the 49th parallel to keep Canadian products out.

According to the indictment, both nations are purloining American jobs.

But before we go any further, we would like to applaud Mr. Trump. The Trump show is all sound and fury, signifying God-knows-what…

But, occasionally – and apparently by accident – Mr. Trump seems to come up with the right message at the right time.

Ultimately, that’s what you want. You want a tariff-free – you want no barriers, and you want no subsidies… That’s the way you learned at the Wharton School of Finance.

But the Trump team never sticks to its playbook. Within minutes, the claptrap was back in the program and the clowns – Bolton, Kudlow, and Navarro – were back on the field.

Bolton on first base, covering national security; Kudlow, on second, making sure that the president gets some of the worst economic advice available; and then there’s Peter Navarro on third.

We cringe when we see their faces on TV. They look like such sour-puss quacks…

Bolton is desperately hoping that another war will make him relevant again.

Kudlow is yearning to relive the glory days of the Reagan administration, but by bringing back its failed policies, not its successes.

And poor Navarro is thrilled to find that someone finally takes his corny trade proposals seriously.

And now, there they are…

Moe, Larry, and Curly… serving as top counselors to the president of the United States. He can humiliate them… contradict them… and ultimately replace them; perhaps that is really their role – to make The Donald look like a genius.

But to fully understand our point of view – which could be right, wrong, or nothing at all – let us tell you about the wedding we went to on Saturday.

If you are a long-term Diary reader, you know that we regard marriage as the most ancient of all win-win deals.

People get together… with no guns to their heads… and make a life-long commitment. Two words of only three letters – “I do” – set the course for a lifetime of happiness, or woe, often both.

Let us begin our story at the end…

By midnight at this latitude, in Normandy, the light of the evening was used up and a heavy fog had fallen.

The ancient castle, lit up for the wedding, seemed almost ghostly… an apparition, as if it were floating somewhere in a dream.

Châteaux [castles] in France are often surrounded by moats. Most have been filled as the need for them as a defense against attack diminished.

The invention of the cannon doomed Europe’s moats. And by the 18th century, France’s châteaux made little pretense of military purpose; they were just big houses, meant to impress the neighbors… the kind of house a hedge fund manager today might build on the Connecticut coast.

But this château was built in the 16th and 17th centuries, when it wasn’t entirely clear how effective cannon would be. It had meurtriers [murder holes] down low, from where defenders could fire their arrows with little chance of being hit themselves.

This château still had a canal, now dry, in front. And on one side was a small lake that went almost up to the side of the defensive walls. In it, we saw the château reflected so perfectly, it was hard to tell which was the real one and which was the imposter.

Disoriented by champagne and the thick mist, we might have stepped towards the front door and found ourselves in the drink.

We were among France’s “beau monde,” people with ancient aristocratic titles and still enough money to put on a proper wedding. Since the Revolution, aristocratic titles have no political significance, but people still dust them off for wedding invitations and funeral announcements.

Our invitation came from two marquis, a rank below duke and above count.

Typically, the wedding begins at three or four in the afternoon. It is followed by a reception for everyone and then a dinner for those who are invited.

Usually, the dinner involves speeches, often a video montage, many toasts, dancing, and singing. A peculiar custom now current in France seems to be to stand on chairs and wave napkins in the air while singing some blustery tune.

Typically, too, the seating is organized. And since you are destined to spend several hours… at least until after midnight… at the table, your enjoyment of the event will be largely determined by the people around you. (You are never seated near your spouse.)

We were lucky. Our companions were jolly.

Still, it was a long day. We didn’t get home until 3 a.m. But we kept our eyes and ears open and tried to learn something.

“Trump is amazing,” began a man on our left. “Here in Europe, we still don’t know what to make of him. He seems like a complete idiot, no offense…”

“I mean, he doesn’t know anything. What he thinks he knows is remarkably naïve and foolish for a world leader. So he just does n’importe quoi [a pejorative in this context, meaning – any damned thing he wants]. And sometimes, it seems to turn out pretty well.”

In Europe, as in America, the show is Trump. And the performances are all sold out.

“I like his negotiating technique. I know… It probably doesn’t work most of the time. But it’s fun to watch. He says something crazy that rattles everyone, even his own lieutenants.

“And then, when he’s broken the furniture, everyone gets together and tries to figure out how to put it back together – but in better shape.

Others weren’t so sure. Not the foreigners. Not even the members of his own party.

“This cannot be our party,” said Senator Jeff Flake (R).

“He beclowned himself [at the G7],” said Republican strategist Steve Schmidt.

Mr. Trump broke some chairs and some vases. Will the other G7 nations be able to put them back together?

We’ll continue our wedding story tomorrow and find out…

Copper has quietly been on a tear…

That’s the story of today’s chart, which tracks the S&P GSCI Copper Index – a widely recognized benchmark for the global copper market – from January 2016 through today. 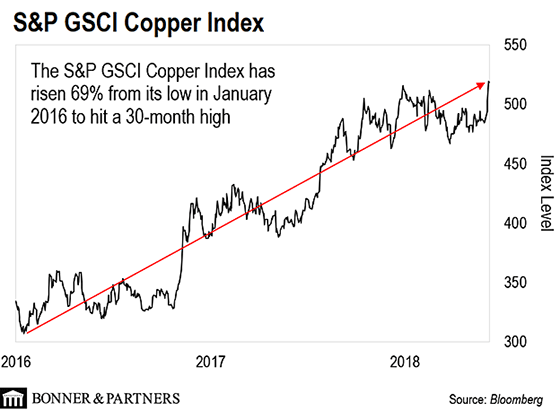 The old-timers refer to copper as “Dr. Copper” because the base metal is often a reliable leading indicator of economic health. That’s because copper has widespread applications in most sectors of the economy – from homebuilding… to electronics… to power generation – so demand for copper often reflects economic growth.

Rising copper demand often signals that the economy is growing. And when economic growth slows, that often results in copper’s price falling as demand for the metal decreases.

Life Under “Social Credit”
In China, the social credit system – in which your “social credit score” is calculated based on a broad measure of your behaviors to determine your “trustworthiness” – is in full swing. Here’s what life is like under a system that some are saying is right out of George Orwell’s dystopian novel 1984.

Fed Fighting for Control
The Federal Reserve is tasked with keeping the country’s borrowing costs in check. Economy lagging? Cut rates. Economic activity heating up? Boost rates. But now, the Fed is fighting for control of rising rates, and many on Wall Street are nervous.

Amazon’s Crypto
Recently, Jeff Brown, Bill’s top technology expert, uncovered something unusual. The mainstream press never reported on it. But Jeff believes it’s proof of something that nobody is expecting: Amazon-Coin.

In the mailbag, readers consider the state of the American republic…

The Constitution in its entirety is no more, including the Second Amendment. That is not right, you say? Well, per the wording, “… shall not be infringed,” the Second Amendment is no more. Multiple governments have infringed upon it. The Founding Fathers did not just state, “… shall not be taken away,” they included a higher standard. For if they used the latter wording, governments would be allowed to infringe.

But as it stands, the former wording was used, and has been violated for many years now. It is absurd to go into court to argue constitutional protection for not infringing the right to bear arms when there are countless infringements, and therefore, no Constitution to argue for anymore.

If there were no infringements, I could walk right up to the president armed to the gills! No? No concealed carry permits, no waiting periods, no federal firearms licenses, etc.

You’re just like Ron Paul. Both of you complain, moan, and retch. Neither of you is successful in getting much of anything done beyond that. Donald Trump is more influential and powerful than both of you, and he did that in six months. Something is wrong with both of you. And you need to accept that you both are not as persuasive, smart, or impassioned.

If you really believed the things you wrote, you’d devote your time and money to getting it done. Repeal the 16th and 17th Amendments, for starters: worse than Prohibition. Explain to people the big and important ideas, like decentralized sovereignty as powerful as distributed ledger technology, or balanced budgets essential to advancement and profitability.

You say, “Everyone knows that their congressman is a scoundrel.” No, they don’t. The vast majority does not look for the truth in the claptrap they are told. Otherwise, the majority serving in Congress, along with the scoundrels in the banking system and the Federal Reserve, would be doing time and making license plates.

Anyone with half a brain should know that receiving money for favors is bribery, and that campaign contributions are money for favors (i.e., bribery). They should also know that those in banking who stole millions should be serving time, not just paying a small part of what they stole and admitting no wrongdoings. And don’t get me started on the real, professional crooks at the Fed.

Uh, Bill, are we reading the same book? I believe Jesus of Nazareth’s thing was to take a few loaves of bread and a few fishes, feed a multitude for free, and have an abundance of leftovers. Remember, give a man a fish, and he will eat for a day. Teach him to fish, and he will sit in a boat and drink beer all day.

Meanwhile, another Dear Reader responds to a comment in a recent mailbag…

This is in response to the recent letter from D’Arcy M. Whoever beseeched you to side periodically with the majority who put Trump into office is confused. Most voters did not vote for Trump; it was the Electoral College that put him into office.

Here’s another fact: The majority of voters today do not like the way Trump is performing as president. And for good reasons, many of which Bill periodically highlights with finely honed, pointed humor.

That’s the message from the man they’re calling the “Billionaire Broker.” We can’t reveal his name at this time. But he’s developed a system to spot stocks before they soar as high as 184%, 248%, and even 350% – sometimes in as little as a few months.

This secret has made Wall Street insiders fabulously wealthy. And the Billionaire Broker is going to reveal it all this Thursday during a live online event. Go right here to reserve your spot. 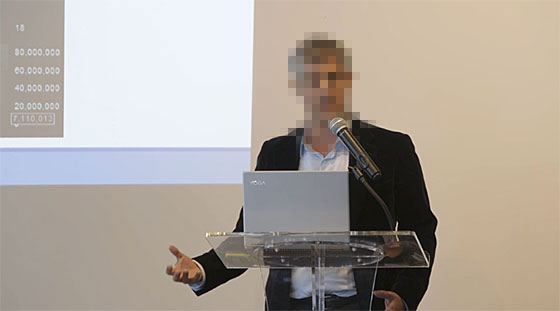