Editor’s Note: Regular readers know Jeff Brown as Bill’s go-to technology expert. With nearly 30 years working as a high-technology executive, Jeff has an inside tract on the biggest technology investing trends. And it shows. He’s the man who successfully spotted the best-performing S&P 500 stock of 2016 and 2018. In other words, when Jeff writes, it pays to listen.

Today, Jeff gives readers a sneak peek of the smartphones of tomorrow… and reveals why it spells trouble for Apple’s iconic iPhone.

Mobile World Congress (MWC) is one of the biggest technology events of the year.

It’s the place where companies gather to showcase their latest and greatest products. The notable exception is Apple, which always hosts its own product reveal events.

The mobile phones that are showcased here typically go up for sale later in the year.

In recent years, MWC has been something of a letdown. As my regular readers know, recent smartphone innovations have been a disappointment.

A bit more memory, a faster processor, better-quality resolution in the camera, but nothing revolutionary.

But that all changed last month.

We got our first glimpse of what will be the future of mobile devices.

And I believe it spells big trouble for one of the most iconic devices in history: Apple’s iPhone…

As I mentioned above, recent smartphone innovations have been something of a disappointment.

And it shows in the numbers. 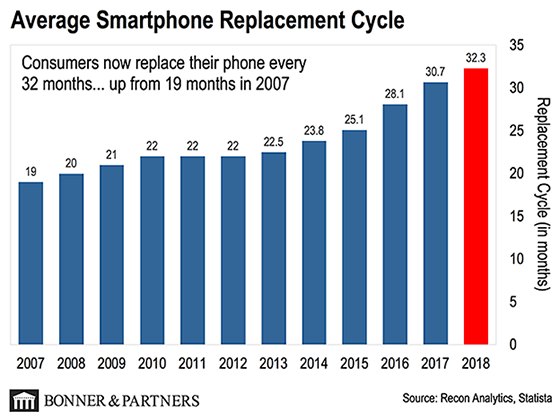 Back in 2007, when the very first iPhone was released, consumers, on average, were replacing their mobile phones just about every year and a half (19 months).

From 2007 through 2014, this replacement cycle remained under two years. Last year, this cycle was at its longest ever – 32 months.

Why are consumers holding onto their smartphones longer? Simple: The newer models simply aren’t innovative enough to compel consumers to run out and buy it. Smartphones are expensive after all.

The new phones just don’t do much more than the old phones. We have been waiting for something big… and that something is now here.

At MWC, we got our first look at 5G-enabled mobile phones.

Huawei, Samsung, LG, and Chinese mobile phone producer Xiaomi all previewed smartphones that were able to operate over 5G networks.

The Huawei and Samsung phones, the Mate X and the Galaxy Fold, even have screens that fold so the mobile devices can essentially transform from a smartphone to a tablet.

Why do I believe billions of consumers will rush out to purchase a 5G-enabled phone?

Well, aside from being able to use next-generation applications like augmented/mixed reality, there’s one simple reason: today’s networks are jam-packed.

Have you ever tried calling somebody, but the line kept dropping unexpectedly?

How about you try to send a text message, but the message continues to fail to go through?

Or how about when you try to load a webpage on your smartphone, but the page simply won’t load?

These sorts of problems are almost always caused by network congestion. Just like you experience traffic congestion on a busy road, mobile networks experience congestion when too much data is traveling over the network.

The chart below shows you all you need to know… 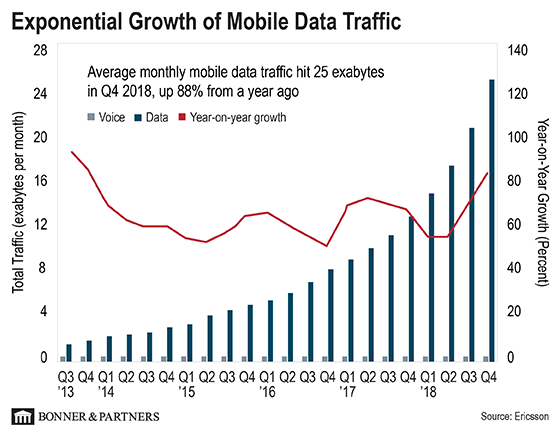 You can see how the traffic for voice has remained flat over the years. But look at the levels of data operating over our current networks. As of Q4 2018, monthly mobile data traffic averaged 25 exabytes a month.

What’s an exabyte? One exabyte is equivalent to 100,000 times all printed material in the Library of Congress. I know… it is hard for us to get our heads around how much information that is.

And the number of exabytes is growing…

Our current 4G networks simply aren’t able to process this much data efficiently. That’s where 5G comes in.

For a full recap of 5G, go right here. But for now, just know that 5G will be, on average, 100 times faster than our 4G networks.

With that kind of speed, dropped calls and slow-loading web pages would be a thing of the past. You could download a two-hour movie in seconds. 5G isn’t just evolutionary. It’s revolutionary.

That’s why consumers will rush out to buy a new 5G phone. Holding on to a 4G phone will soon be akin to having a dial-up modem in an age of high-speed internet.

And I believe this spells trouble for one of the world’s most recognizable companies: Apple…

Apple’s iPhone is one of the most recognizable consumer products in history. I’d bet that many of you reading this have an iPhone in your pocket.

Apple’s newest family of iPhones, expected to be launched by the end of this year, will not be 5G-enabled.

And according to a research note from Barclays, Apple might not even have 5G phones by 2020. That would mean that we wouldn’t see the first 5G iPhone until 2021.

Apple has always been a late adopter. It waits until it can pretty much ensure a consistent experience across all phones before launching a feature.

But there will likely be more than 100 markets around the U.S. with 5G networks by the end of this year. Those smartphone users aren’t going to wait around until late 2020 (or even later, if the Barclays report is right) to get a 5G phone.

That’s a problem for Apple. iPhone sales contributed 60% of its revenues in Q4 2018. Bottom line: the company is going to struggle this year and possibly next year. It will lose market share to other mobile phone companies that offer 5G devices.

That may be hard to believe. After all, Apple is a behemoth of the tech world. Last August, it became the first publicly traded company to hit $1 trillion in market capitalization.

The market cap is now down 25% from it’s all-time high of $1.1 trillion. You may think that makes it a great bargain. But, as I’ve shown you, there’s more pain ahead for Apple.

It’s, of course, up to you which stocks you decide to buy.

But let’s just put it this way: I won’t be recommending Apple to my readers anytime soon.

P.S. 5G will be the biggest investing theme of the next decade. And Apple has dropped the ball…

But plenty of other tech companies are rushing full speed ahead with 5G. One of my favorites is poised to soar 10x as 5G picks up. And you won’t have to wait years and years to start making money. 5G is happening right now. The best stocks are going to start climbing in a matter of months. 99% of investors will miss this. Don’t be one of them. Full story here.