I used to try to get things done by saying “please.” Now, I dynamite ‘em out of my path.

“Conservatives agitate for change after GOP loses the House.”

What? We didn’t know there were any conservatives left.

Among the many things we were wrong about was our guess two years ago that Mr. Trump would end up starting a new party – like Juan Perón or Emmanuel Macron.

We figured the conservatives in the Republican party would resist his brand of reality TV politics, and that he’d have to break away and begin a new movement.

Instead, he remade the GOP in his own image. The party – which used to favor a conservative agenda of small government and balanced budgets – is now ready to go along with anything Mr. Trump proposes.

But there has never been anything conservative about Donald J. Trump. He is bigger than life, and willing to go where no president has ever gone before.

Parallels can be found in history, in foreign countries mainly – particularly in Latin America – and in some of America’s most baroque provinces (Huey Long comes to mind).

But Mr. Trump is sui generis… at least in the White House.

In another era, The Donald would have been taken no more seriously as a candidate than a showman like P.T. Barnum or a matinee idol like Rudolph Valentino.

And if, by some fluke, either had been elected, he would have been a mere entertainment – a real boost to journalists and the media, but of little other significance.

But Mr. Trump did not get elected by accident or by fluke. And he did not come along at a time when things were moving along nicely.

Instead, we believe he has a major role to play in the historical swing of the U.S. economy from mistake to catastrophe.

Trump was voted in because the common American has been getting ripped off for the last 40 years. During that period, the main… and often only… asset the typical person had to offer – his time – declined in value.

As we have shown in this space, he now has to labor for two to three times longer to buy an average car or an average house.

As for paying his share of the national debt… or his share of total debt – forget it; he will never be able to do it. He hasn’t enough time.

And while the typical working stiff grew poorer, other people – the elites, the one percent, stockholders, insiders, the well-educated and well-connected – got rich. In inflation-adjusted terms, the Dow is up 760% since 1978. Real wage growth has gone nowhere.

Using time as the ultimate measure of wealth, today, the top 10% are so wealthy that they can command about four times as much of the laborers’ time as they could in the 1970s.

Voters didn’t necessarily see it that way… But they felt that something wasn’t right. And they voted for Mr. Trump to do something about it. “Make America Great Again,” they pleaded.

Alas, the president did not understand the challenge and missed his opportunity to do anything about it. America could only be made great again by returning to the conservative principles that made it great in the first place – limited government, limited deficits, limited wars, and limited bureaucracy.

Instead, the president increased the deficit and diverted attention with public feuds, border walls, and trade wars.

Which, of course, is just what the insiders were hoping for.

The trouble is, change is coming anyway. It is the change Mr. Trump couldn’t stop… and few will welcome.

It is the change that happens when $35 trillion of excess, unpayable debt runs into a wall of rising interest rates.

The collision comes in the form of a huge sell-off on Wall Street. What we’ve seen so far are only faint hints – like the grumbling of Vesuvius – of a much bigger collision still to come.

…the Fed created yet another yield-seeking bubble that has encouraged vastly expanded indebtedness in every sector of the economy, and has set U.S. equity market investors up for a likely loss in excess of $20 trillion in market capitalization in the coming years.

Unfortunately, that’s how valuations work over the complete cycle. That’s how it was possible to correctly project an -83% loss in tech stocks in March 2000, and a loss in the S&P 500 of about -50% at the 2007 peak. When you’re pushing $40 trillion in U.S. equity market capitalization, the highest multiple of U.S. GDP in history, a loss of half of that capitalization over the completion of the cycle is a conservative estimate. It’s certainly not a worst-case scenario.

Also, remember from the 2000–2002 and 2007–2009 collapses that Fed easing does nothing to provoke speculation in periods where investors are risk-averse, because in a risk-averse environment, safe liquidity is a desirable asset rather than an inferior one.

Yes, change happens, whether you want it to or not.

And change is natural… and healthy (a “correction” washes out mistakes).

But the story doesn’t end there. That $20 trillion market loss will come out of the pockets of the rich… the Deep State… and a certain D.J.T.

And here is where we predict Mr. Trump will make his real mark on history. The president will not say “please” to the Fed. He – along with the Democrats and the new Republicans – will dynamite the obstacles out of his way…

And… well… we’ll see what happens next…

But our guess is that you won’t like it.

TECHNOLOGY INSIGHT: WHY ELECTRIC VEHICLES WILL REPLACE YOUR GAS GUZZLER

Recently, I showed you the trends that will make self-driving cars a reality.

In the very near future, you will be able to commute to work, take a ride to the airport, and even run errands, all using a self-driving taxi service.

Actually, you may be surprised to learn that a service like this is already in operation.

The company is called Tesloop. It shuttled passengers to their destinations in Tesla cars that utilized an “autopilot” function. And 90% of the miles were driven without the driver ever touching the steering wheel.

Tesloop vehicles drove about 17,000 miles each per month. The company generated $17,000 of revenue per car per month. That’s a dollar a mile.

And one of the key components of the company’s success was the use of electric vehicles (EVs). In fact, most likely, all self-driving cars in the near future will be EVs.

There’s a very simple reason for this: Because electric vehicles have fewer moving parts, they break down less often, and are much cheaper to maintain than the average internal combustion engine (ICE) vehicle.

Consider this: The average ICE vehicle has 2,000 moving parts. The EV equivalent has just 20. That’s just 1% of an average ICE. Incredible, right?

For proof of an EV’s longevity and low maintenance costs, let’s consider the following data…

This past July, Tesloop announced that one of its EVs had exceeded 400,000 miles over three years of use. At that time, it was the highest reported mileage in the world for an EV. 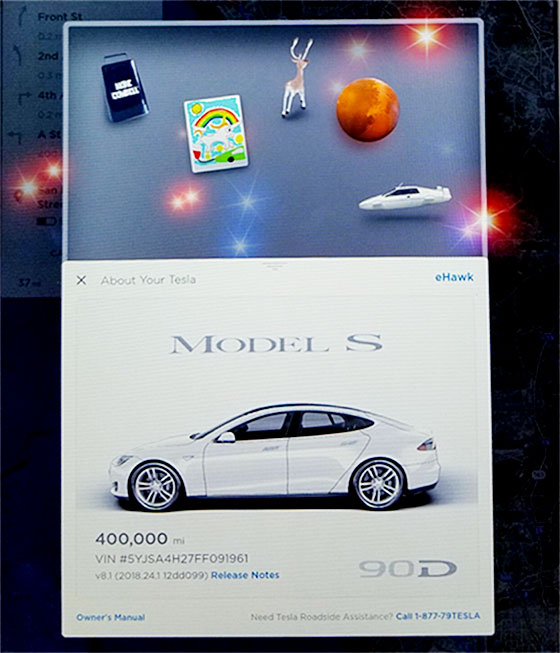 What we are looking at is a screenshot of the center information console in the Tesla Model S. In the lower left-hand corner, we can see that the car hit 400,000 miles.

Compare that to a Lincoln Town Car, which would run $88,500 for the same mileage. The EV is 79% less expensive to maintain than the Town Car. Wow!

These are powerful economic incentives for both consumers and automotive manufacturers to make the shift towards EVs. And don’t worry, for those of us who still want to drive a gasoline-powered car or truck in 10 years’ time, they will still be available; we just won’t have as many choices as we do today.

And the benefits of electric, self-driving cars go beyond cost savings.

Each autonomous vehicle has the potential to reduce emissions by more than 90% compared to conventional ICE vehicles.

This will have an extraordinarily positive impact on air quality and on our environment, particularly in major metropolitan areas, where congestion tends to be the highest. The impact in developing countries, where current air quality is so bad that it is detrimental to human health, will be even more profound.

For these reasons, the cars of the future will be self-driving, electric vehicles. And this trend is just picking up speed. You’ll want to pay close attention to this story in the years ahead.

P.S. Self-driving cars will change the world. But before self-driving cars can go mainstream, another piece of technology has to be completed. And it’s not just self-driving cars that will utilize it. This new tech will be the backbone of our modern society in the years ahead. And of course, there are investment implications.

I’ve uncovered a little-known company that’s helping to shape this new technology. It’s currently under the radar, but I expect the stock will soar as much as 10 times starting November 14. Get all the details here.

Wanted: Budget Hawks
As Bill outlined above, the old conservatives fretted over the budget. “How are we going to pay for this?” was the common refrain. Now, in a world of trillion-dollar annual deficits, the budget hawk is an endangered species. But maybe not for long…

Quant Funds’ Crisis of Confidence
“Red October” was the worst month for stocks in six years. Even the quant funds – funds that use specialized algorithms to find investments – took a hit. And it’s causing some to get weak in the knees…

In the mailbag, talk of Trump… and the one thing voting might accomplish…

I am preaching to the choir. It is so repulsive – the millions spent in this alliance between the media and the politicians that could have been used for just about any other more useful purpose. It’s practically scandalous.

I don’t hate Donald Trump – I just don’t trust him. He seems to be a sort of used car salesman, trying to sell me something that will break down and leave me stranded somewhere down the road, while he takes my bucks to the bank.

You keep stating that Trump is, like all politicians, robbing us blind and doing nothing positive. I can give you a very long list of specific instances where Hillary, Comey, Clapper, Mueller, McConnell, and the late McCain stole hundreds of millions and deliberately created more problems.

I would like to know the source and specifics of where and how Trump is just like these others. I see his actions constrained by others; he is not a dictator. I never expected Trump to step in and immediately find a balanced budget bill on his desk for signature. What idiot would expect that?

You are right, but by voting, you just might sway the vote towards the less-big jackasses – a chance you won’t have by staying home. In fact, by not participating, you probably ensure the biggest jackasses win. So don’t complain.

“This will be the biggest investing trend of a decade.”

It’s not weed stocks… it’s not commodities… it’s not even cryptos. It’s this. 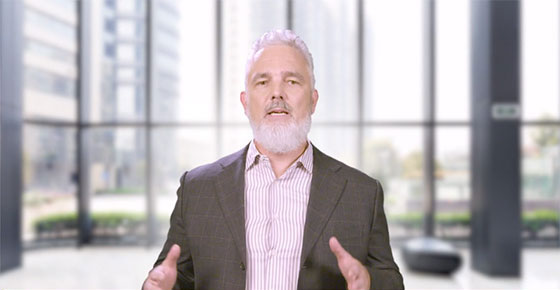