BALTIMORE – Stocks advanced a little yesterday. Investors were said to be hopeful about the upcoming trade talks with the Chinese.

With a little luck, President Trump will talk to Chinese President Xi Jinping about the ongoing trade war. He’ll announce a big victory – just as he did following talks with North Korea last year.

Then, he’ll let things go back to where they were before.

His modus operandi is now well known. He stirs up a fight. Then, he moves on to another fight… while the dust settles quietly over the last combat.

It’s not a bad way to do things. To your fans, it looks like you’re fighting their battles. Your enemies, too, get themselves worked up, eagerly pretending to defend Western civilization against the Barbarian from Queens.

Most important, a president who only fights fake battles does little harm. If presidents were rated properly, the one who did the least would be the one who got a big monument on the Potomac.

Doing nothing is generally underrated. And, in today’s case, neither the president nor the Fed can do much anyway.

The problem with the Fed is that it is trapped by its own fraud. That is, it has created a fake economy, one that depends on phony interest rates.

The basic problem is that markets are natural things. They give us information. We can distort the information – with jiggles and jives. But that doesn’t really help. Because then, we have counterfeit information that leads to more mistakes.

The Fed distorted the most basic and important number in capitalism – the cost of capital.

Pressing down interest rates too low for too long (Mistake #1), it led investors, householders, and businesses to believe that capital was cheap.

With short-term interest rates below inflation, naturally, they borrowed rather than saved. Debt rose… and rose… and rose… so that today, total U.S. debt is about $69 trillion, of which the feds themselves are on the hook for $21 trillion.

Remember, time is money. Money is time. You do a day’s work, you receive a day’s pay. You exchange one for the other. And there are only so many hours in the day.

Tradition is what we have after generations of trial and error. And traditionally, an economy can support 1.5 days of debt servitude for every day of output. That is, total debt should be about 150% of GDP.

Today, the U.S. economy has mortgaged up twice as much time as usual. With yearly output around $20 trillion, its debt-to-GDP ratio is over 300%. As long as interest rates are low, and stocks don’t crash, Fed chair Jerome Powell can claim he is normalizing interest rates.

But then, when the going gets tough, he will rush to make them more abnormal than ever – just like the Japanese did.

Meanwhile… over at the White House… the president is trapped, too.

Government is fundamentally a system that is deeply conservative… helping to make sure the rich get richer. All of its major activities are focused on it.

The tax code, with its emphasis on taxing current income rather than unrealized capital gains, for example, helps keep middle-class people from accumulating significant wealth, while the rich – who don’t rely on labor income and don’t have mortgages to pay – skate along happily.

And the regulatory system is also basically a system for keeping out competition.

Nobel laureate George Stigler proposed a general theory in which “every industry or occupation that has enough political power to utilize the state will seek to control entry. In addition, the regulatory policy will often be so fashioned as to retard the rate of growth of new firms.”

Federal spending, too, consists of two parts. There are relatively small bribes to the many zombie voters – medical and retirement disbursements, mostly.

And there are relatively large pay-offs, salaries, fees, and contracts to the cronies, the elites, and the insiders.

This taxing, spending, and borrowing rewards the people who control the government at the expense of those who don’t.

And by bipartisan consensus, with the approval of the Deep State, Congress, the press… and the great and good all over the country… the available funds – whether from taxes or borrowing – have already been claimed.

Money will continue to go to the military, to various other boondoggles, and to old people. Old people vote. The military/spooks are at the heart of the Deep State.

This leaves the president with relatively little room to maneuver. He can only tinker around at the edges of policies, mostly on “cultural” issues, such as border walls, “taking the knee,” shutdowns, and other distractions. Major budget cuts are off limits.

There is always a risk, of course. Sometimes, fake wars blow up.

But most likely, with the houses of Congress deadlocked between the two parties, and with Mr. Trump’s own predilections towards sparring with the media rather than fighting for real change, we can expect more mock wars in the months ahead… but no change of direction.

The current bounce in U.S. stocks could be a precursor to another big drop.

That’s the message from today’s chart, which measures the S&P 500’s short-term response immediately after falling 20% or more.

That has the financial media celebrating the end of the correction… But don’t let this snap-back rally fool you – this is normal behavior for a bear market. 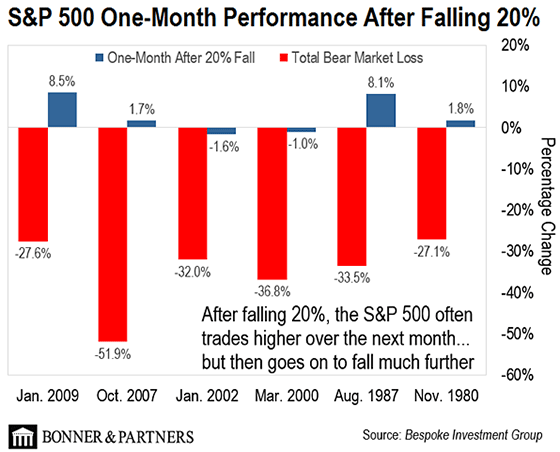 The blue bars show the index’s one-month performance after the 20% drop. And as you can see, four out of the six times the S&P 500 fell 20%, the index climbed in the following month. And in the two instances when it fell, the losses were manageable.

These snap-back rallies are usually accompanied by the financial media proclaiming the worst to be over… which can cause retail investors to let their guard down.

Do not make that mistake.

Have a look at the red bars on the chart. They show the S&P’s total bear market loss when it’s all said and done… You can see that it’s not pretty.

In each instance of a 20% fall, the S&P performed reasonably well the next month… only to suffer even bigger losses down the line.

So do not let the strong rally we have seen over the past two weeks fool you – stocks are not out of the woods yet.

The current snap-back rally could soon fade… and that’s when we will find out how bad this bear market will be.

The Best and Worst of 2018
Which asset class performed the best in 2018? Which fared the worst? Here’s everything you need to know…

How to Retire With Rates on the Rise
The S&P 500 has roughly tripled over the last decade. But as Bill said, rates are on the rise. That’s going to put pressure on future returns from your stocks and bonds. If you’re still looking toward retirement, you might need to get creative.

Trump’s Real Legacy
While the mainstream media obsesses over Donald Trump’s tweets, something unusual is happening behind the scenes. Nick Giambruno believes POTUS could be up to something big. And it has nothing to do with a trade war, an infrastructure boom, or The Wall. It’s this.

In the mailbag, should Trump legalize marijuana? Not if a few dear readers have their say…

Better Trump should lose the next election than hang his name to the “Gateway Drug” that will bring our country down and make us useless garbage!

We need less drugs, not more, and certainly not the gateway drug pot. We need less drugs pouring over the border killing many tens of thousands of people annually. It is amazing what idiots will put in their bodies without a second thought. It is wrong to usher this into the country. Isn’t the number of people dying by alcohol crashes and present use of drugs enough?

Medical marijuana was simply a back door into completely legalizing pot. As is hemp. [Andrew] Cuomo is salivating at the prospect despite playing coy for years. We don’t need more potheads running things, riding on our roads, making life and death decisions about us. Don’t be stupid; you’re on the wrong side. Everyone should run away from legitimizing a terrible scourge on our country. You don’t make friends with the devil. The devil laughs at you and then eats you up.

Despite Mr. Bonner’s repeated effort to make this easy, even numbering them 1 through 4, I still have a really hard time understanding the whole concept. To start, Mistake #2, raising rates, is not a mistake at all. It’s what should have happened in the first place.

Some analysts argued it’s the market that’s pushing up the interest rates; the Fed merely rubber stamps them quarterly. Then there’s Mistake #4, which I understood to be quantitative easing. Even in the interview with Alan Greenspan a couple of years ago at your headquarters, he clearly stated that potentially, the Fed can print enough money to buy the whole system. So how do we get to Dow 10,000?

An underground market just stepped into the light, and it’s presenting investors with an opportunity to potentially make a small fortune.

No, it’s not legal marijuana. It’s something else entirely. Details here. 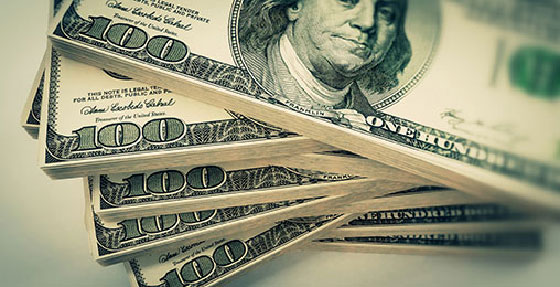