LONDON – A dear reader challenged us:

To create a perfect world what type of government would you propose?

Another put it a different way:

Again, I’m convinced more than ever, Trump is the only candidate that might have a chance to get us out of the financial and economic mess the United States is in. If Bonner & Partners is unable to recognize this, it tells me their agenda is not to fix America’s problems… but continue the agony…

The Importance of Cabbages

We answer the first question by responding to the second…

No, our agenda is not to fix America’s problems. That’s too tall an order for a free letter! Besides, America’s wounds are mostly self-inflicted – the result of free and fair elections (along with the usual fraud and delusions).

Far be it from us to come upon the scene with morphine and bandages… and interfere with the workings of such a grand and elegant democracy!

Alert readers will spot the reference to Emperor Diocletian. After fixing the empire for 20 years – with acts in equal measure of genius, wisdom, and imbecility – Diocletian finally saw the light. He retired, returned to his home on the Dalmatian coast, and planted cabbages!

Cabbages are real. And important. You can eat them. They can keep you alive.

Government and its policies, its great causes, its Lincolns and Bonapartes, are confabulations of myths, hallucinations, conceits, and lies.

Pharaoh was a god, the ancient Egyptians believed. So it made sense to scrape huge pieces of rock across the hot desert to honor him. Louis XIV was appointed by God. He had a “divine right” to rule, and if that was so, who could say no to him?

And now, the myth-du-jour is that God stands shoulder-to-shoulder with 51% of registered voters; no matter what dumbheaded thing they do, they always have Him on their side.

Alas, in modern democracy, the majority can’t really know what is going on or why. The world is too big… and infinitely complex.

The sacred majority can’t follow the details of public policy, even in its backyard. Who among the 51% read the enabling act for Obamacare? Imagine trying to keep up with the shifting politics of the Middle East!

The voters can’t tell a Shiite from a she-wolf. So, policies are set not by the voters but by the elite… the Deep State.

Under cover of the dense claptrap and folderol, the elite figure out how to game the system. These “foxes,” as the great Italian economist, Vilfredo Pareto, called them, soon have the government doing their bidding.

Can Donald Trump escape the foxes?

The whispering has already started. The foxes are already reconciled to “The Donald” as the Republican candidate. “We can work with this man,” they say to one another. “We may have to…” they sigh.

Their message to Trump: “We can work together.”

And now, Mr. Trump must negotiate the most important deal of his life.

The papers report that casino magnate and regular Republican donor Sheldon Adelson is considering a major investment in the Trump team.

We assume he has worked out the terms; most likely Adelson – an ardent supporter of Israel – will insist on a continuation of the Bush-Clinton foreign policy.

That shouldn’t be much of a problem. Trump has made it clear he doesn’t mind torturing people or killing their families, if that’s what it takes to keep the Deep State in business.

And he is rumored to be considering Newt Gingrich for his running mate. That should reassure the Northern Virginia real estate market; the billions of dollars will continue to flow to the military-security-foreign policy industries and pay for McMansions in Fairfax County.

And what about at health, education, and welfare?

Trump has already suggested an increase in the minimum wage might be in order. “Don’t forget,” the foxes whisper, “zombies vote too!”

Then he quickly backed away from an honest discussion of America’s public debt. Someone must have let him know how it works.

“Hey,” they probably told him, “we gotta fund the Deep State somehow!” Trump, a quick learner, even suggested a tax hike on the rich.

Our guess is that the best dealmaker in the world will have no trouble finding a win-win with Washington and Wall Street.

Our guess is that Wall Street will have no trouble convincing “The Donald “to continue the Greenspan-Bernanke-Yellen financial policies.

Most likely, the ugly truth hidden in his tax records is that he has a lot less money than his bragging suggests… or a mountain of debt.

Just guessing (to be confirmed or disproven by later events), but Trump built his fortune on bold moves, cheap credit, and lucky breaks. It would not be surprising if he were deeply in debt; who isn’t? And now, he needs the Fed’s low interest rates as much as anyone.

But… but… but… No matter who is elected, he will have to come to terms with the real government – the foxes who run the Deep State.

But remember our questions for today: This just democracy in action, warts and all, right? Nothing is perfect, right? There is no alternative, right?

Small, limited government… with no unpayable debt… no phony money… no empire… no QE… no ZIRP… no phony War on Terror, no War on Drugs… no War on Poverty…

No Fannie. No Freddie. No trade deals. No foreign policy.

All we can recommend is a smaller one. With less money to steal… and fewer cronies to steal it.

Further Reading: Despite what the mainstream media tells you, it doesn’t matter who wins the race for the White House. The Deep State already controls just about every aspect of your life. From health care to education to the food on your table to the never-ending War on Terror, the Deep State is pulling the strings.

In his latest online presentation, Bill exposes how the Deep State’s cronies have pushed the world to the brink of an irreversible disaster. To hear how it will all unfold… and, more importantly, how it’ll change your life forever…

BY CHRIS LOWE, EDITOR AT LARGE>

Is tech in trouble?

Today’s chart is of tech bellwether the Nasdaq-100 Index. It tracks the largest 100 U.S. non-financial stocks listed on the Nasdaq. 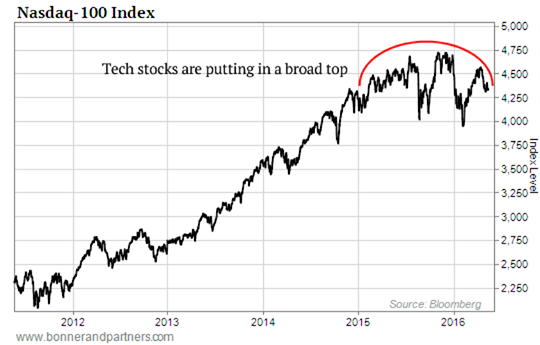 As you can see, the index is putting in what looks like a very broad top (the red line on the chart).

Trump Masquerades as “Publicist” to Brag About Himself
A recording obtained by the Washington Post captures Trump masquerading as publicist “John Miller” to brag about his love life. Trump now denies he played the role of Miller on the recordings.

Central Banks to Trigger Gold-Buying Panic
Central bankers are losing control of the global financial system. And one currencies expert says it’ll cause a “super spike” in gold. More importantly, he believes he’s found the best way to play gold in this situation.

Ousted Brazilian President Claims She Is “Coup” Victim
Brazil’s senate has voted to oust president Dilma Rousseff over charges of corruption. She will now be replaced by the country’s vice president. But she claims the move is a “coup” hatched by her political enemies.

This was one of your best – and that’s saying a lot! Your explanation of Hayek was clear, understandable, and enjoyable to read – so thanks!

I realize you have no compunctions about stirring up the hornets’ nest, but perhaps we can yet save this country by educating the ignorant – or at least slow our nation’s rate of descent into Hell.

Today’s commentary is back to your usual good stuff.

A reader’s comment regarding doing away with the Electoral College and replacing it with majority wins was a major consideration of the Founders. Florida and other states have gone to that “majority wins” approach… and it stinks.

Voting by Congressional districts, the Electoral College way, allows a balance between folks of varied interests to have some sort of balance. Metropolitan city dwellers and small communities, farmers and those in the city would not own a car for the world all need representation.

Masses of people need government. Governments prevent anarchy, setting laws and regulations so that everyone isn’t acting at cross purposes, and so that society can function in something of a coordinated fashion.

The problem is that politically inclined people take control of government over time, and think they know the best thing for everyone. When people reject that vision, or evade it in some way, those in control tend to become more controlling.

After all, they know what is best for people, and resistance to their plans is unpatriotic – ultimately treasonous – and treason must be punished. When enough people tire of being punished, they revolt, more or less violently, and start over. They often make a lot of mistakes before finding some medium which gives them peace – for a while.

It is a never ending cycle, and will continue, unless humans figure out a better way. Periodically, we will live in “interesting times.”

It seems to me that one should vote the Libertarian ticket… at least making the statement that we have too much government, and would like less.

How many of you fly on airplanes that are made safe by big government? When was the last time you checked the maintenance log of the plane or the pilot’s qualifications and log book before you flew?

He says the unprepared could be in for rude awakening before the end of 2016.

To make sure that’s not you, go here now to sign up for his free training videos.