The media – eager to attract eyeballs for their paid advertisers – spun the story as if it were the most important thing to happen since Adam ate the apple.

But what really changed?

The House – now in Democrat hands – will begin a new set of annoying hearings, designed to distract the voters from the larceny going on behind the scenes and the disaster it foretells.

There, away from the headlines, Democrats and Republicans, lefties and Trumpistas, will divvy up the ill-gotten goods from the election.

We’ll return to this subject in a moment. First, we bring you up-to-date on our whereabouts.

We came back to Ireland on Monday. It is rainy and gusty… but otherwise, a beautiful autumn on the Emerald Isle.

The grass is green. And the trees are especially colorful this year, perhaps because they got so little water earlier in the fall.

Up at the jobsite, where we are renovating an old rectory, we found a thin man with mutton-chop sideburns operating a large backhoe. We introduced ourselves:

“Yes… well… I’m glad you’re here. We’ve got a lot of work to do, clearing the fields and all…”

Later, we turned to our helper, Ronan, for clarification.

“I couldn’t understand a word. Does he only speak Gaelic?”

There is a Gaelic-speaking area nearby. We assumed the thin man must have come from there.

“No, that’s Paddy O’Rourke. He speaks English. But it sounds like Gaelic. Sort of. I should have warned you. You’ll have to live here for 20 years before you can understand Paddy.”

Voting is one of the great, hollow rituals of modern life. It allows the common man to stand up straight, his chin high… his mind dizzy, believing that he – not the insider elites – always has the last word.

When you talk to an “average” person in America, you usually find a nice fellow who has his own affairs more or less in order.

He (generally) gets along with others, avoids traffic accidents, and conducts his personal life with reasonable skill and plausible purpose.

But he is completely unable to master the many details and nuances of 21st century public life.

Ask him about trade deficits… negative interest rates… terrorists… or “taking a knee” at football games. He loses his bearings immediately and defaults to clichés and campaign slogans.

“We have to stand up for what we believe…” “Better to fight them there than here…” “The economy is pretty good; they must know what they’re doing…”

His replies show more feelings than ideas… more prejudices than thinking… and more desires than principles. Most importantly, they show a huge lack of cynicism.

Which is just the way it should be. People have better things to think about than abstract, public issues. And you don’t get far in private life by being cynical.

Yet, while cynicism is a drag on private affairs, it is essential to public ones. Alas, the average man is ill-equipped.

Studying primates, scientists conclude that “social intelligence” (perhaps lodged in the frontal lobe) is connected to group size. Apparently, it takes a lot of brain energy to sort out human relationships.

Neanderthals lived in groups of only 20 to 50. Chimpanzees can handle slightly larger groups. And humans are adapted to groups of 150 to 200 people. Generally, the smarter the primate, the larger the group size.

So what chance do these animals have of understanding groups of 300 million? They would need far more cynicism, and brains the size of spaceships.

Public issues are confusing, ambiguous, and claptrappy – even to the experts. You can’t expect a truck driver to have very well-developed or coherent views on them.

A recent editorial in The Wall Street Journal by Yale professor, David Gelernter, missed the point completely. If you don’t like Donald Trump, he proposed, you don’t like the common man or the USA:

Is it possible to hate Donald Trump but not the average American? […] What I see on the left is often plain, unconditional hatred of which the hater – God forgive him – is proud. It’s discouraging, even disgusting. And it does mean, I believe, that the Trump-hater truly does hate the average American – male or female, black or white. Often he hates America, too.

Here at the Diary, we take a different view. We like truck drivers, bakers, and heavy equipment operators. We like America, too. As for its president, we’ve never met him.

But just because we like a man doesn’t mean we want him to tell us what to do. And just because you get 150 million of these average fellows to vote doesn’t mean their choice will be any better than the luck of the draw.

Most likely, it will be worse. Because, while the average person is a decent human being… he is neither always good nor always bad, but always subject to influence.

And a skilled demagogue – a confident know-it-all with an easy solution for every problem – will always be better at stirring up the mob than an honest, humble thinker.

There you have the two biggest frauds of the whole system, right together. We are all supposed to be equal. But some – using the political process for their own purposes – are able to tell the rest of us how to run our lives.

And the selection process will almost always lift up the worst – not the best – candidates.

And so… we end up being ruled by the biggest jackasses.

New technologies are rapidly gaining adoption in the business world…

That’s the story of today’s chart, which looks at the corporate adoption of new technologies by 2022.

This data comes from the World Economic Forum’s Future of Jobs survey, in which 313 global companies across many different industries were asked about the new technologies they will actively adopt within the next four years. 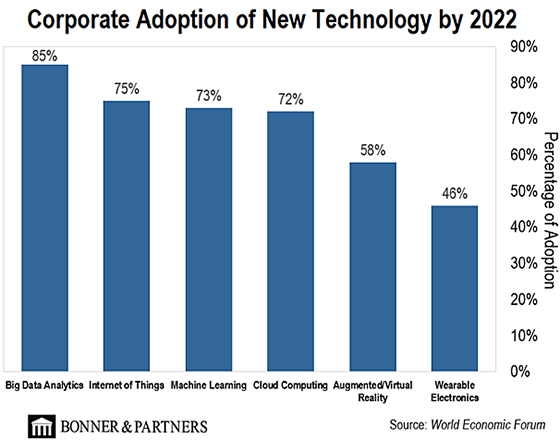 As you can see, 85% of the companies surveyed are planning on adopting big data analytics… 75% will use the “Internet of Things”… 73% will employ machine learning… 72% are ramping up their use of cloud computing… 58% intend to use augmented or virtual reality in their operations… and 46% intend to use wearable electronics in some capacity.

The companies surveyed expect these new technologies to increase efficiency, help them expand into new markets, and reach a consumer base that is “composed increasingly of digital natives,” or people who have grown up with modern technology.

These technologies represent a major investment opportunity. In fact, management consulting group Bain & Company projects an investment surge of up to $8 trillion in the United States alone, as companies rapidly adopt new technology.

The bulk of that investment will flow into the technologies most adopted by corporate America… and that bodes well for the tech companies involved in making these new technologies a reality.

P.S. American corporations will spend billions implementing the above technologies over the next few years. But for those technologies to work fully, another piece of tech will have to be completed first. It will serve as the “backbone” for a new generation of technological innovations.

And according to Jeff Brown, Bill’s top tech expert, this represents the best investing opportunity of the decade. Jeff is hosting a free online webinar tonight at 8 p.m. with all the details. Reserve your spot here.

Why Wall Street Embraces Bad Math
Those working in the financial services industry ought to be math whizzes, right? But new reporting shows that Wall Street tends to play it fast and loose with the numbers. Why? Because it sells…

Bitcoin Will Burn Down the World
A key feature of bitcoin is that it can’t be copied and pasted. New bitcoins must be “mined.” And the mining process takes energy… a lot of it. The electricity needed to mine one bitcoin would power the entire country of Angola for a day.

Today, a mixed mailbag: A tech-fueled police state… the “problem” with free markets… and a morality clause for the Constitution…

Thank you, Bill! Another amazingly right-on letter. You are one of the smartest, most observant, honest, objective, insightful, wise, brave, tell-it-like-it-is people today. It would be wonderful if you ran for president. But after powerful entities read your letters, they would prevent it. Like the brave Americans who opposed British rule of “the new colony” here, let’s continue to be observant, brave, and outspoken.

Regarding a potential police state in America, many of us would welcome a reasonable version of it. Illegal aliens; criminals; chaos; obnoxious Hollywoodism; crazy movies, TV shows, and music – mistrust, fear, anger, road rage, and violence are getting to the point where realistic Americans will demand more maturity, responsibility, and law and order.

A tech-fueled police state won’t happen here because we are electing Republicans not Democratic socialists.

The biggest problem with the “free market model” is it only comes with a gas pedal and no brakes.

Hi Bill, all you are thinking makes sense. But for me, one thing our administrators forgot to incorporate in our Constitution is a sensibility and morality test for any greedy politician who might corrupt our system by being friendly with our enemies (as long as they pay him some money to buy a few golf courses and give him a charity to open a new hotel)!

The present guy fits this mold. He licks the boots of terrorist dictators (the Saudis) and corrupt Communist leaders like Putin, as long as he sees some monetary gain in his favor. If the two prior points were included in our Constitution, then such selfish, stupid, and greedy people would not have any chance of getting into the White House.

Will you be attending this free investing webinar?

Jeff Brown, Bill’s top tech expert, is hosting an online investing webinar tonight at 8 p.m. ET. The event is free, and when you attend, you’ll get access to Jeff’s watchlist of technology stocks. There’s still room. You can reserve your spot right here. 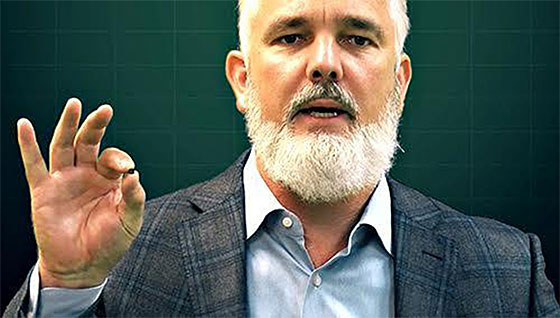