Instead of a projected deficit of $526 billion in 2019, the Office of Management and Budget now estimates Trump’s proposed budget would lead to a deficit of more than twice that much – over $1 trillion.

From The Fiscal Times:

The White House Office of Management and Budget on Friday released its updated annual budget request, known as the mid-session review. The numbers… contain what the Committee for a Responsible Federal Budget calls “a very big trillion-dollar admission.” Namely, the White House’s own deficit projections keep rising, thanks to the recently passed tax cuts and spending increases.

But what else is the administration wrong about? Probably just about everything.

Growth will be lower than expected… no more than it was under Obama.

Deficits will be higher.

And the wars – against drugs, terror, poverty, and now trade – will all be lost, not won.

There was a time you could go to war… conquer some other nation… take their fertile women as concubines… their men and children as slaves… and their land and all their portable property.

Those were the good ol’ days!

Alas, today, all wars are losers because today’s world is fundamentally one of cooperative exchanges.

Real wealth is created by robust networks based on win-win deals. And real wealth is what gives you the technological ability to blow the other guy sky-high.

In other words, you can live with win-lose, but you will live in poverty and backwardness.

And if you get enough of those win-lose deals over a long enough time, you’ll end up walking on all fours… with the win-win guys throwing you scraps of food.

In Trump’s trade war, for example, winning would be the worst thing that could happen.

And it has the biggest trade surplus, which it happily recycles into loans to America and other foreign countries.

In other words, when China goes down, most likely, the whole world economy will go down with it.

Then, we can wave our flags… give a big whup of victory… and savor our poverty like a well-prepared roadkill dinner.

But we’ll come back to finance. First, let’s recall what we did this weekend.

We’re trying to put a tin roof on an old barn. Two of our boys came over to help, bringing a couple of our grandchildren with them.

It looked easy enough. All we had to do was clean off the top of the wall, reset some stones, and put on a wood plate on which we could attach our rafters.

But when we got up and had a closer look, we discovered that the roots of a tree that had grown into the wall had penetrated so deeply that it was impossible to get them out without destroying the wall itself.

Seeing no alternative, we tied a rope to the stump of the tree and hooked it to the tractor. Then, we pulled… hoping that only the top courses of stone would come down with the roots.

“Stand clear,” went out the order.

And then, to the delight of the grandchildren, as the tractor began tugging, we saw the whole wall bulge out and come loose… as if it had been undermined by an earthquake.

A big portion of it collapsed onto the ground, in a heap of stones, roots, dust, and dirt.

“Oooh, you got yourself a bigger job than you expected,” said Alan, the contractor working on our house nearby. “Can you handle all that masonry?”

“No problem,” we assured him. “We like laying stones,” we added. Behind us, our two sons shook their heads, side to side.

“Well… it looks like there’s a difference of opinion on that one.”

Bill’s grandchildren help with the masonry on the old barn

Normally, we find stone masonry relaxing and rewarding. Each stone has its place. Once in position, it stays for a long, long time.

But these stones need to be lifted to the top of a two-story wall, along with the cement to put them in place. And it all has to happen fairly fast, as we have less than two weeks before we move on.

Meanwhile, the media is still buzzing about Trump’s visit to Helsinki, where the president appeared to side with the Russians over the FBI on the question of election meddling.

What was said? What does it mean?

Our guess is that it is a distraction… a circus… full of sound and fury, but signifying nothing.

What really matters, and what the media isn’t covering, is how many win-lose deals the feds are forcing on the rest of society. The more they do… the more they take… the more they boss everyone around, the poorer we get.

But it is not a graceful, gentile poverty that the feds impose. It is a brutal, nasty poverty.

For today’s insight, we check in on the progress of U.S. stocks in Q3.

Today’s chart maps the sector performance of U.S. equities from July 1 through today. 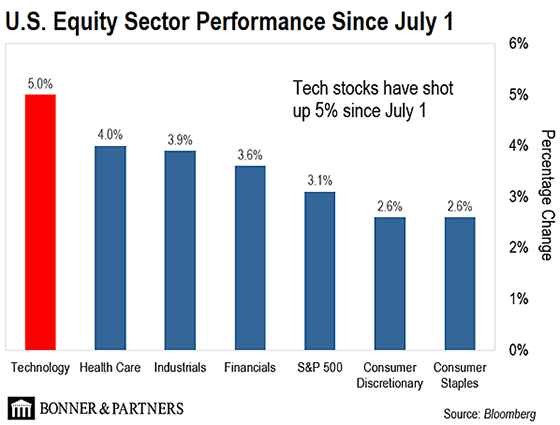 Tech stocks have been the big winners since the start of the third quarter… As you can see, they’ve shot up 5% since July 1.

Even the broader index is powering ahead. The S&P 500 has averaged a 14% yearly return since 2010. But since the start of July, the index has returned 3.1%, roughly one-fifth of its yearly average return.

These are huge gains in just three weeks of trading.

The Race to $1 Trillion
Which will be the first publicly traded company with a market cap of $1 trillion? Two of America’s biggest companies are neck and neck in the race to reach the landmark figure..

Regulators Still Don’t Know What’s Going On
After the fallout of the financial crisis, Congress enacted legislation to give market regulators more oversight. But there was a loophole… Now, a decade later, regulators still don’t have the full picture.

Why is it that you, like the press and some lawmakers, speak as though Donald Trump represents the U.S. when he meets privately with adversaries? Trump represents Trump. It’s doubtful they talked much about political issues. Though Trump and Putin met behind closed doors, this is what we know: 1. It was a closed-door meeting, suggesting (with good reason) that neither Trump nor Putin wanted anyone to ever know what they discussed. 2. Neither Putin nor Trump has as much interest in his own country as he has in his own wealth and power. We can fairly guess that for most of the two hours, they discussed personal business issues.

So you don’t trust Hoosiers, huh? Very funny. Well, many of my fellow Hoosiers don’t trust Pence! “Still waters run deep.” So who knows what lurks under his placid exterior? As for President Trump, it appears that he walked in front of the Queen for only six seconds… a fitting number for him. I love your Diary and your agile mind!

I agree that Trump is not the smartest guy in Washington, but he is also not the dumbest. When everything comes crashing down, everyone will blame Trump. However, this country’s troubles started long before Trump – years ago, when we departed from the gold standard and started printing more money out of thin air.

They got terribly worse under the Obama administration. And look how far this country is in debt now. Is it any wonder no one wants our dollar bills now? Our politicians don’t know the first thing about finances. They only know how to spend, spend, spend. When your dollar won’t buy anything, put the blame where it belongs – on our politicians in Washington. We will all pay for their mistakes

The assorted Democrats, left-leaners, socialists, and communists that continue to babble on about the current president seem to have conveniently forgotten that, just over two years ago, their latest hero, Barack Hussein Obama, in the condescending manner that only he has, lectured us that there was absolutely no way American elections could be compromised. Of course, this was when the entire arrogant clan assumed that Hillary’s coronation was in the bag.

Keep up the great work, Bill. Outing the hypocrites is a specialty that you have mastered!

What Trump needs is the servant of Roman times, who, as Caesar returned from some triumphant victory, would whisper in his ear that all greatness is fleeting and momentary. The problem, as far as I can tell, is that he doesn’t listen to anyone, in the true style of the dictators we have all learned to hate.

Meanwhile, comments critical of the president in Friday’s mailbag draw a response…

Seems like most of the anti-Trumpers who write you ignore the fact that the biggest traitor we have ever had in the Oval Office had eight years of unrestrained power, added more job-killing regulation, ignored Russian aggression, ignored Chinese threats as they built military bases on their man-made islands in disputed sea waters, laughably kept moving his line in the Syrian sand… and innumerable other treasonous acts that only history will bring to light.

What a load of recycled hay from the “intelligent” Trump-hating dear readers represented by these carefully chosen comments. A suggestion for “Mr. Intelligent,” Roger W: If you enjoyed Russia and the Russian people so much, why not join Bonner and his intelligent expats “over there” and spare us this “intelligence” drivel.

It seems that lately, your readers’ comments have gone off the deep end. Pro-Trump, anti-Trump, blah, blah, blah. Is no one able to critically think for themselves anymore? Why does our society force us to choose a side and stick by it ‘til death do us part? Am I no longer allowed to praise Trump for certain choices and criticize him for others? Divide and conquer… the Deep State’s ultimate goal.

The president did something very unusual in January. The media didn’t understand it… even members of the Trump administration seemed perplexed.

But Jeff Brown, Bill’s top tech expert, thinks he knows why the White House took this unprecedented step. And if Jeff’s right, this could secure America’s economic dominance for decades. Full story here. 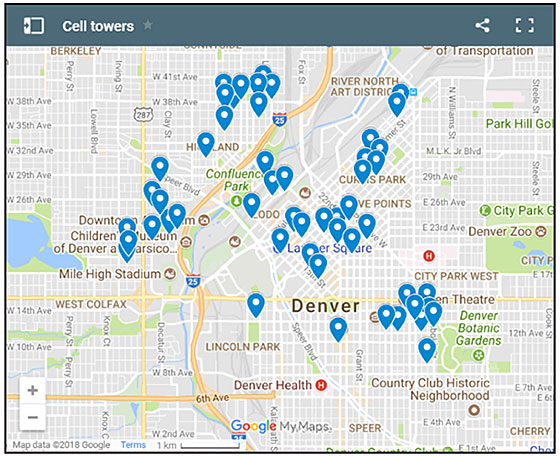