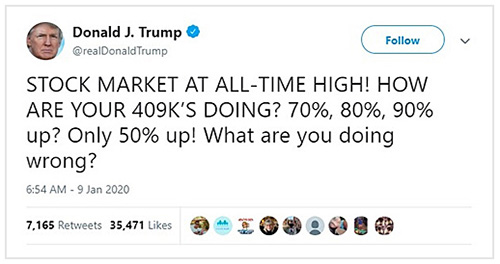 We don’t know what we’re doing wrong… but we’re going to sign up for a 409K… whatever that is.

What a market! And this was just after President Trump showed how easy it would be to cause a real disaster, by provoking Iran to fire missiles at U.S. bases in Iraq.

But then, he also showed how easy it was to avert a disaster.

The pattern is, by now, very familiar. Mr. Trump uses it in all his celebrity squabbles, trade wars, and political brawls. He says or does something outrageous… then, he backs away.

Gold, the ultimate disaster meter, shot up on news of the killing of Iranian General Suleimani. Then, it too quickly backed off. Gold stocks lost 5% almost immediately.

But “all clear” is just what the stock market… and the U.S. economy… ain’t.

Herewith… a short history of the early 21st century… and where we stand now.

The Age of Descent

The Age of Descent began at the end of the 20th century. Then, four decades of bad money, bad policies, and the badass Deep State caught up with the U.S.

By 2016, the War on Terror – designed to transfer wealth from the public to the armed wing of the Deep State – had already been going on for 15 years, funded by debt.

And for the most recent six years, the Federal Reserve had conducted a war against normal business and economic cycles – preventing normal corrections – in order to keep the wealth flowing to Wall Street and the richest 10% of the population.

It was then, in the election of 2016, that voters faced a sour choice. There was the devil they knew, Hillary Clinton. And there was the one they didn’t know, Donald Trump.

Given what they knew at the time, they seem to have made the best choice; they voted, by a hair, to get to know the devil Trump. At the very least, he promised something new.

He said he would end the foreign wars… and pay off the national debt in eight years. The reasonable voter could say to himself: “Even if he disappoints me, he still seems to want to go in the right direction.”

Mr. Trump also promised to call a spade a spade. In that, voters got perhaps even more than they expected. But it soon became evident that the reality TV show star didn’t know what a spade was. His shows had been scripted for him.

In the fall of 2018, the Fed was normalizing interest rates and draining away the $3.6 trillion in excess liquidity (new money) it had introduced during the crisis years. This policy was known as QT, or quantitative tightening.

But then, with a sell-off in the stock market, and under threat from the Trump White House, the Fed panicked. It promptly ended its “normalizing” of interest rates. A year later, in September 2019 and still under pressure from the president, it panicked again and ended QT.

Suddenly, it began flooding the markets with new money again. More spending and a tax cut had increased federal deficits. By that time, foreigners had largely stopped funding U.S. red ink. Americans were reluctant, too. This left only the Fed. It funded 90% of federal borrowing needs by creating about $4 billion per day of new, fake money.

But it probably didn’t matter very much who was in the White House. While the president keeps his ratings up with unchecked impulses and improv dialog, the real, important lines are still scripted – by the Deep State.

By the opening of the 21st century, the military/industrial/congressional complex that Eisenhower had warned about in 1961 was a reality. It could not be stopped.

Too many powerful people depended on it – for their reputations, their careers, and their wealth. Trillions of dollars were taken from the public in order to reward the Pentagon and its crony suppliers, Wall Street, and all the hangers-on, chislers, and shysters of The Swamp.

Nor could the demographic trends be denied. More and more people were leaving productive careers to go into retirement. The over-75 population segment was the fastest-growing of all; it was also the group that needed the most care and attention. Now, with so many older voters, increased entitlement spending could not be stopped, either.

And now, despite the irrefutable math and ineluctable financial debacle, the public barely seems to notice. Impeachment. Assassination. Partisan politics. Rising stock prices. Everything seems more important than saving the nation from a bitter catastrophe.

Insiders vs. the People

The voters take sides. Some are for the president, some are against him.

But they square off on issues that have little significance. Good guys vs. bad guys. Rich vs. Poor. White vs. Black. Straight vs. Gay. Red vs. Blue. Even man vs. woman. The Chinese are the enemy one day. The next, it is the Mexicans. And then, the Iranians.

…it nevertheless descends, sinks, and slides deeper and deeper into the mud. CNBC:

The current wave – which started in 2010 – is thought to be “the largest, fastest and most broad-based increase” in global borrowing since the 1970s.

“The history of past waves of debt accumulation shows that these waves tend to have unhappy endings.”

Unhappy? We don’t know. But probably not what most people are hoping for.