Is gold a commodity, an investment, or money?

Gold is a chameleon. It changes in response to the environment.

At times, gold behaves like a commodity. The gold price tracks the ups and downs of commodity indices.

At other times, gold is viewed as a safe haven investment. It competes with stocks and bonds for investor attention.

And on occasion, gold assumes its role as the most stable long-term form of money the world has ever known.

A real chameleon changes color based on the background on which it rests. When sitting on a dark green leaf, the chameleon appears dark green to hide from predators. When the chameleon hops from the leaf to a tree trunk, it will change from green to brown to maintain its defenses.

Gold also changes its nature depending on the background.

Right now, gold is behaving more like money than a commodity or investment. It is competing with central bank fiat money for asset allocations by global investors. That’s a big deal because it shows that citizens around the world are starting to lose confidence in other forms of money, such as dollars, yuan, yen, euros, and sterling.

For the first time since 2008, it looks like central banks are losing control of the global financial system. Gold does not have a central bank. Gold always inspires confidence because it is scarce, tested by time, and has no credit risk.

Gold’s role as money is difficult for investors to grasp. One criticism of gold is that is has no yield. Gold has no yield because money has no yield. In order to get yield, you have to take risk.

Gold does not have these risks.

Lost confidence in fiat money starts slowly then builds rapidly to a crescendo. The end result is panic buying of gold and a price super spike.

A “Super Spike” in Gold

We may be looking at the early stages of a similar super spike that could take gold to $10,000 per ounce or higher. When that happens, there will be one important difference between the new super spike and what happened in 1980.

Back then, you could buy gold at $100, $200, or $500 per ounce and enjoy the ride. In the new super spike, you may not be able to get any gold at all. You’ll be watching the price go up on TV but unable to buy any for yourself.

Gold will be in such short supply that only the central banks, giant hedge funds, and billionaires will be able to get their hands on any. The mint and your local dealer will be sold out. That physical scarcity will make the price super spike even more extreme than in 1980.

The time to buy gold is now, before the price spikes and before supplies dry up.

What signs do we see that gold is now behaving like money?

For one thing, gold price action has diverged from the price action of other commodities. This divergence first appeared in late 2014 but has become more pronounced in recent months.

Gold observers know that gold measured in dollars is down significantly from its all-time high in 2011. COMEX gold peaked at $1,876 per ounce on Sept. 2, 2011. And recently traded as low as $1,056 per ounce on Nov. 27, 2015. That’s a 44% decline in just over four years. Yet in the same time period, broad-based commodities indices fell even more. One major commodities index fell 53%.

The contrast between the behavior of gold and commodities is even more extreme when we narrow the time period. From June 20, 2014 to Jan. 15, 2016, the broad-based commodity index fell 63%, while gold fell only 17%. The recent collapse in commodity prices was almost four times greater than the decline in gold prices.

From mid-January to mid-February 2016, gold rallied 14% while commodities still languished near five-year lows. 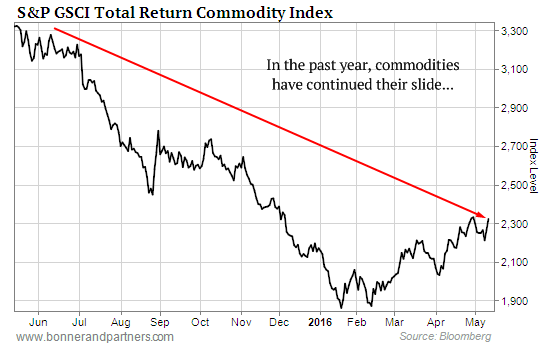 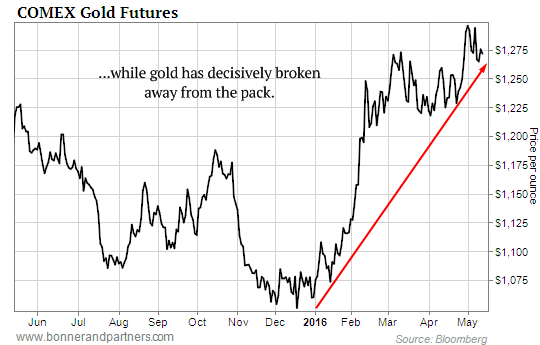 The Monetary System Is Going Wobbly

Right now, investors around the world are losing confidence in Chinese yuan, Saudi rials, South African rand, Russian rubles, and a long list of other emerging market currencies. Investor preferences are shifting toward gold. This accounts for gold’s outperformance of the rest of the commodity complex when measured in dollars.

What is interesting is that when the price of gold is measured not in dollars but in rubles, yuan, or rials, the percentage price increase in gold increases as currencies decline against the dollar.

When you understand that gold is money and competes with other forms of money in a jumble of cross rates with no anchor, you’ll know why the monetary system is going wobbly.

It’s important to take off your dollar blinders to see that the dollar is just one form of money. And not necessarily the best for all investors in all circumstances. Gold is a strong competitor in the horse race among various forms of money.

Normally, I recommend a 10% allocation of investible assets to physical gold for your permanent portfolio. But when short-term trading opportunities arise, certain gold trades, such as exchange traded funds (ETFs), are a great way to get dollar price exposure to gold and book 100% or more profits.

This chameleon has changed color recently. And the new color is gold.

P.S. I’ve just revealed my best strategy for turning the coming super spike in gold prices into a fortune for you and your family.

To find out how you can play this “gold window” to earn life-changing profits, check out my latest presentation.