Gold stocks aren’t much different than any other type of stock. They just happen to be shares of companies that produce gold.

These companies mine the ore that contains the metal and sell it to refineries. The process is similar to oil or any other natural resource in the ground.

The reason why gold stocks perform better than gold is simple: They offer leverage to the gold price. That’s why the returns can be spectacular.

The word “leverage” usually means borrowing. That’s not the case at all in the gold market.

If you aren’t familiar with the concept of leverage in gold stocks, here’s a quick example of how powerful it can be:

A History of Gold Market Booms

These are not hypothetical returns. They are real.

Gold more than tripled during this period. But gold stocks more than quadrupled.

This wasn’t the only time gold stocks soared…

Companies like Agnico Eagle and Campbell Red Lake climbed over 120%. And Sigma shot up 73%.

These profits stemmed from a mere 10.8% rise in gold.

There was another boom in the 1990s. The average gold producer went up more than 200%…

All while gold only rose 8%.

Gold returned 158%, while the average gold producer gained over 400%.

As you can see, an increase in the price of gold (even a small one) can lead to huge returns.

You can make a fortune in the gold market. But you must understand market cycles.

Gold stocks move in extreme boom and bust cycles, more so than most other markets. Contrast that with “noncyclical” businesses, like those that sell toothpaste or laundry detergent. Demand for these types of everyday items is steady whether we are in a bull or bear market.

Demand for natural resources like gold is highly cyclical. Just like with oil, investors pour money into gold miners during boom times.

A gold stock might soar 500% over a three- to five-year raging bull market. Then collapse 90% in six months in a nasty bear market. Similar to what we’ve seen over the past five years.

From late 2011 to late 2015, gold fell 42%. It was a nasty bear market, sending companies out of business and delivering huge losses for investors. While the fall in the price of gold was drastic, the fall in gold mining stocks was even worse. 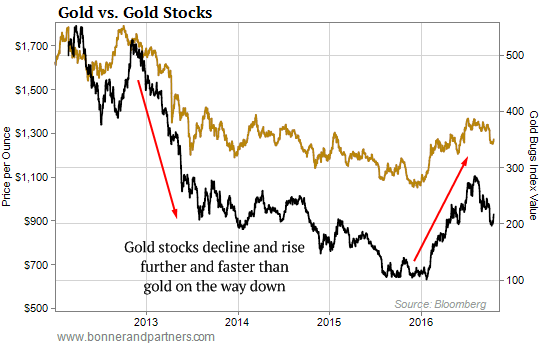 However, that’s only the average. Some companies fell even more.

As we mentioned above, gold prices are 26% higher this year.

The Market Vectors Gold Miners ETF (GDX), which tracks the performance of all the major gold producers, is up 115% from its January low. But certain gold miner stocks are up even more. The table below shows how much several big gold miners are up over this year. As you can see, Barrick Gold Corp. (ABX) is up 138% since January 19. Meanwhile, Yamana Gold Inc. (AUY) is up 215%.

In the chart below, we charted the major cycles for gold stocks from 1975, when gold again became legal to own in the U.S., to the present. Eight distinct cycles played out during this time. 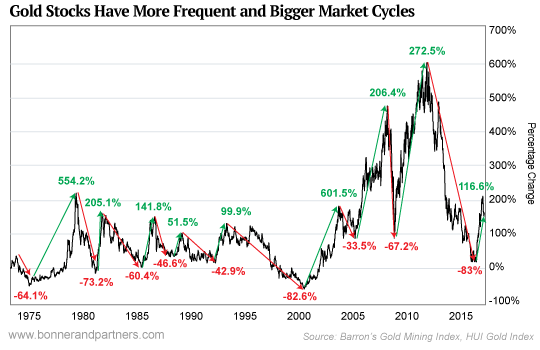 Gold stocks have been in the second-deepest bear market since 1975. It’s even worse than the selloff following the 1980 mania.

In other words, this is an incredible opportunity.

Gold Stocks Are Preparing For The Next Boom

But you don’t just want to buy any gold stock…

It’s important to pick the best gold stocks. Because not all gold stocks perform the same in a cycle.

Like in any other industry, the stocks of stronger companies will go up more than those of the weaker ones.

And there is a small area of the gold market where gold stocks can go “vertical.” It’s here where investors can make 10x, 20x, or even 50x their money.

Editor’s Note: Right now, there’s an urgent gold catalyst you’re not hearing about from the financial media – and it’s creating an extraordinary one-time opportunity for investors who get in before an estimated $3 trillion flows into one tiny sector of the gold market.

You can learn all about this catalyst – and how to access the secret gold trade that could return 27x your money – by watching this brand-new video. But don’t delay… The urgent gold catalyst is barely two months away, so the time to prepare is now.