Editor’s Note: During the week, Bill sheds light on all the claptrap and win-lose deals playing out in Washington and on Wall Street. But on Saturdays, we feature a unique essay on an idea outside of our usual fare.

Today, Jeff Brown, Bill’s top technology analyst, reveals what the mainstream media won’t tell you about the future of cryptocurrencies, and shows how the crypto “insiders” are preparing to profit in the years ahead.

The third wave of the blockchain boom is ramping up… 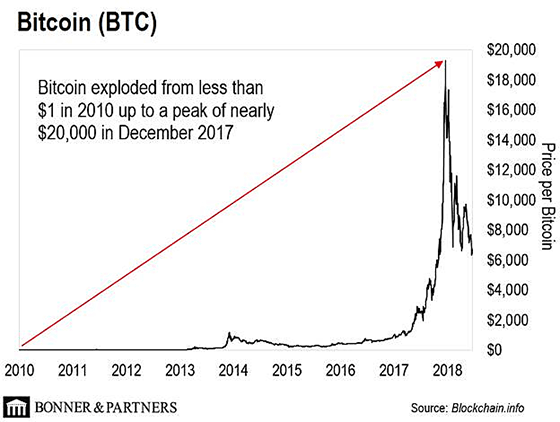 The mainstream press focuses on bitcoin’s price, but that’s not the most important thing about the first wave of the blockchain boom.

What’s important is that bitcoin provides us with something we have not had before – a secure store of value AND an efficient mechanism for transferring value globally on a peer-to-peer basis… all wrapped up in one system.

I cannot stress enough how important that is. Without bitcoin, the next wave of the blockchain boom could not have happened.

Bitcoin paved the way for the second wave, which was Ethereum and ERC-20 tokens (digital assets that run on an Ethereum blockchain and are compliant with Ethereum’s standards for digital tokens) as a new means of capital formation.

This led to a wave of Initial Coin Offerings (ICOs) in 2017 and 2018, through which blockchain projects raised billions of dollars. The chart below gives you some insight into just how massive this explosion in ICOs was. 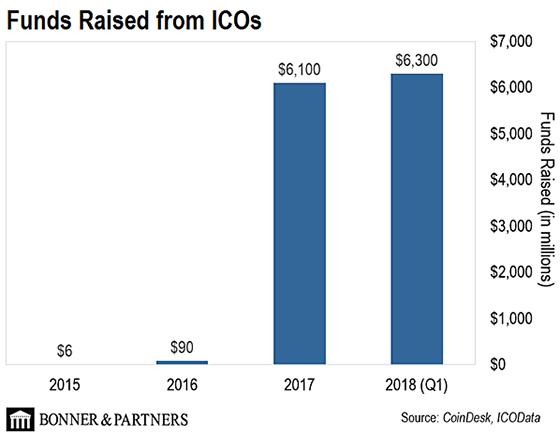 As with traditional venture capital funding, many of these ICO projects are ultimately unviable.

But the high-quality projects, projects solving real-world problems in creative ways, will change the world and reach incredible valuations.

This wave of innovation and creativity led to a major influx of capital, and at its peak, the crypto market value reached $830 billion. 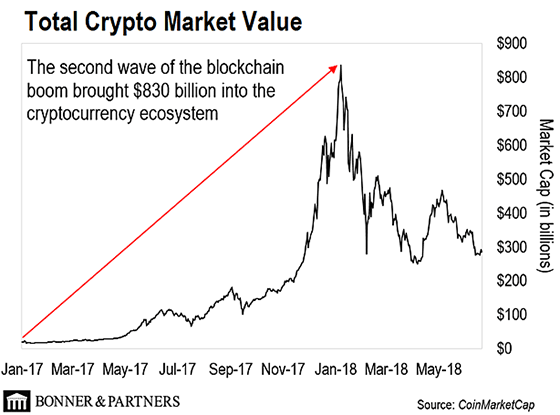 But this rush of capital caught the attention of the Securities and Exchange Commission (SEC), and the regulatory climate around cryptos has tightened significantly.

Most of these ICO raises were under the guise of utility tokens – cryptocurrencies that provide access to the project’s products or services but do not convey ownership interest. Utility tokens are not classified as securities, thus these ICOs were not registered with the SEC.

But, as it turns out, many of these new tokens will likely be considered securities in U.S. markets because the ICO raised money from investors prior to the development of a product, with the clear expectation that investors would earn a profit upon the product’s completion.

That’s why regulatory scrutiny has increased… and that has caused a great deal of uncertainty within the blockchain ecosystem.

As a result, the crypto market cap has fallen to $247 billion as I pen this letter to you.

And because of that, many people who rushed into bitcoin, ether, and other cryptocurrencies at the peak have sold out at a loss and sworn off cryptocurrencies forever. Warren Buffett was right, they assure themselves, bitcoin is rat poison.

That is a mistake.

You see, I recently attended several exclusive cryptocurrency and blockchain conferences in New York… and I learned that something big is happening in the blockchain space right now.

I met with top executives of the New York Stock Exchange and NASDAQ… top hedge fund managers… and leaders in the blockchain industry. They are all focused on the same thing: the creation of the security token industry.

Security tokens are regulated financial securities – like traditional stocks and bonds – that provide token-holders with ownership interests in the underlying company or asset.

Security tokens will be the third wave of the blockchain boom… and they will make the first two waves look tiny by comparison.

One executive I spoke with expects security tokens to bring 10% of global GDP – roughly $8 trillion – into the blockchain ecosystem by 2024. That represents growth of 28X.

And Bruce Fenton – founding member of The Bitcoin Foundation and managing director of Atlantic Financial – expects to see $20-$40 trillion flow into the cryptocurrency and blockchain space in the coming years. That represents growth of up to 14,000%.

The growth of the blockchain industry will look much like the growth of tech stocks with the rise of the internet. There will be booms and busts as the industry develops… but the technology is real. It will change the world.

Here is a chart of the NASDAQ Composite, which tracks every stock trading on the NASDAQ exchange from 1985 to today: 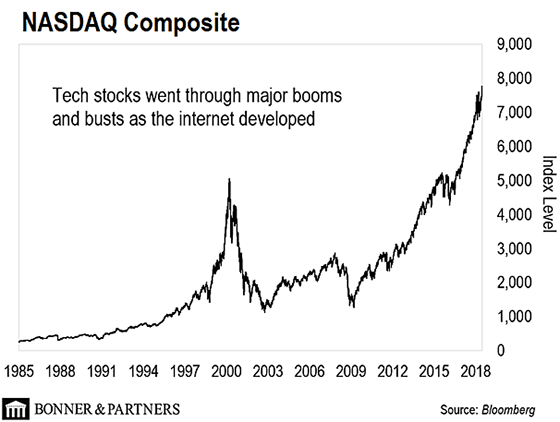 As you can see, tech stocks went through major booms and busts as the internet developed and eventually became ubiquitous in our lives.

Now, if you look at the total size of the blockchain ecosystem today… and then gauge the amount of capital that is about to flow into the space… that would probably put us around 1995 on this chart.

Which means there is life-changing upside ahead…

But we are talking about so much more than just massive investment gains. Security tokens will spark an economic boom of historic proportions.

Allow me to explain…

The U.S. capital markets are not functioning as intended… they are broken.

Initial Public Offerings (IPOs) have collapsed 81% since 1996, and most of that decline was in issuances from smaller companies. As a result, there are fewer publicly traded companies today than there were in 1975, despite GDP increasing significantly.

And it’s not just me saying this. David Weild, former vice chairman of the NASDAQ, had this to say at the inaugural Security Token Summit earlier this month:

We have left GDP growth and undermined U.S. competitiveness because our capital markets are not designed to support small issuances.

In other words, by restricting capital formation in the U.S. to only large IPOs, we are also restricting economic growth.

So what does this have to do with security tokens?

Security tokens will make it much easier for companies to raise the capital they need to grow.

I will spare you the boring details, but registering securities for a traditional IPO is a tedious, expensive process that requires companies to go through several layers of middlemen… and spend millions of dollars on lawyers and brokers.

Security tokens will disintermediate those middlemen, which will reduce costs and simplify the process of launching a Security Token Offering (STO).

That will tear down the roadblocks currently preventing small businesses from raising capital… which, in turn, will foster capital allocation to small-cap businesses that will drive economic growth.

And that is why security tokens will be the most robust asset class within 18 months.

Massive institutional capital will flow in from hedge funds… pension funds… and family offices. And the blockchain industry’s market cap will likely be in the trillions by early 2020 as a result.

That’s not just blind speculation… it is coming from the highest tiers of Wall Street. Institutional players have not yet piled into the cryptocurrency market because they are waiting on a regulated token environment. The security token industry will provide that environment.

Ralph Daiuto, general counsel and chief operating officer of tZero (Overstock’s crypto exchange), said that 100% of the stocks and bonds on Wall Street will be “tokenized” and traded as security tokens… probably within 24 months.

So small business will have access to the capital it needs… and institutional investors will gain exposure to an explosive asset class. And guess what? Small investors will benefit tremendously also.

For one, the best small companies have avoided going public because it is too expensive and too much of a hassle to do so. Instead, they have raised money from a small pool of private accredited investors. The small investor has not had access to those deals.

What’s more, security tokens will not trade in fixed units like stocks and bonds – they will be fractionalized like cryptocurrencies.

If you want to buy a stock today, you must buy at least one share… and your broker would prefer that you buy in even 100-share blocks. Well, many high-quality stocks trade for hundreds… and even thousands of dollars per share. Which limits access for smaller investors.

For example, Berkshire Hathaway’s A-shares (BRK.A) are trading at $281,600 per share today. The small investor cannot afford to buy even one share of BRK.A.

But if Berkshire were a security token, the small investor could buy 1/100th of a token – .01 BRK.A – and thus gain exposure to a legendary trophy asset.

And guess what? Security tokens won’t be limited to stocks and bonds…

Real estate… gold… oil… art… classic cars… anything that has value will be tokenized and traded on security token exchanges.

That’s the world we are going into. Don’t worry, I’ll be sure to send Diary readers updates along the way.

And by the way, these security token exchanges will be global, they will trade 24/7, and settlement will take hours rather than days.

That being the case, do you think investors will buy securities with dollars, euros, and yen and deal with several layers of exchange rates and delayed settlement times, as they do today?

Or do you think they will buy security tokens with Bitcoin, Ethereum, and Litecoin to facilitate transactions that can settle almost instantly in a peer-to-peer fashion?

My bet is on the latter…

P.S. The mainstream financial media will tell you that the blockchain and cryptocurrency boom is over, you missed it. But as you can see, nothing could be further from the truth.

Investments in quality blockchain projects will appreciate 100X over the next few years. But to see those types of gains, you’ll have to invest now, before the rest of the world catches on.

I put together a brief video presentation to show how I’m preparing my readers for the third blockchain explosion. View it for yourself right here.