MOLINOS, ARGENTINA – “Never interrupt an enemy when he is making a mistake,” said Napoleon.

In the 1970s, two of America’s biggest rivals were making big mistakes. Russia had been operating a centrally planned economy since the 1920s. China took up central planning after World War II.

Communist central planning was a curse to those who had to live with it. But it was a blessing to those who didn’t. It eliminated competition. Without the price signals coming from honest money and honest markets, the planners were in the dark.

But rather than appreciate their good fortune, U.S. meddlers couldn’t stop themselves. They interfered, spending trillions of dollars over a 40-year period fighting an enemy that was already in the process of destroying itself.

And now, it’s the U.S. that is making the big mistake. Its leaders seem so eager to cripple its rival that they’re ready to pluck out their own eyes if it would force China to wear reading glasses.

We’ll come back to that in a minute. First, a travel update.

This might be a good time to visit Argentina. You can learn a lot more from an economy in crisis than from one where everything appears to be hunky-dory.

The inflation rate here is 42%. That alone is worth seeing firsthand. The experience may come in handy later on at home.

When prices are moving so rapidly, people can’t keep up. In dollars, the half-hour cab ride to the airport this morning, for example, cost only about $5. A nice dinner for two last night, with wine, was only $20.

“You better move fast,” said our farm manager. “This will only last a few more months. Then, local prices will catch up.”

As near as we can tell, Argentine president Mauricio Macri is doing a decent job. But he came into office after years of financial chicanery, overspending, and mismanagement by previous administrations. Now, the mischief needs to be cleared away before growth can begin again.

So in addition to the inflation, the economy is in a deep recession. Sellers are becoming desperate.

Macri took over in the middle of a storm… He knew he was in for some rough sailing.

The U.S. president, meanwhile, has seen nothing but clear skies.

Mr. Trump told the United Nations (UN) on Tuesday that he was doing a great job. He is making America great again, or so he says. Many people, including many of our dear readers, believe him.

Here at the Diary, we have our doubts. We don’t see how the U.S. could be made great again without going back to the principles that made it great in the first place.

That is, balanced budgets… real money… and a smallish government that minds its own business.

Since we see no progress on any of those items, we presume the country is still sailing in the wrong direction.

Into a hurricane, that is. Or, as former Supreme Court Justice James McReynolds put it, to humiliation… and chaos.

Economically, the U.S. peaked in the 1970s. China and Russia were sidelined by their dopey win-lose systems. And America still had more-or-less good money… occasionally balanced budgets… and a residual respect for work and enterprise.

But in the U.S., the Deep State was becoming more powerful… A new, fake money was inaugurated in August 1971, when Nixon severed the final thread connecting the dollar to gold.

Central planning was on the rise. Costs, paperwork, and regulation were increasing. Growth was slowing. And the great shift towards “financialization” was beginning.

The Reagan team won the White House by arguing that government was the problem, not the solution.

But once in office, the feds realized what team they were on… and that they had access to almost unlimited funds.

In the immortal words of Dick Cheney, they saw that “deficits don’t matter.”

By the end of Reagan’s two terms, the insiders were more powerful than ever. And the federales had run up the national debt from $900 billion to $2.8 trillion – the biggest peacetime build-up in history.

Then, after the crash of 1987, deficits and debts in every sector – business, household, and government – got larger and larger.

Soon, the whole country was swamped by debt.

In the 30 years since 1987, the federal government has never had a single real, balanced budget.

Then, the Fed swung into action, too. Starting in 1987, it added $4 trillion to its holdings of assets.

“Assets” sound like good things… as if the Fed was adding to the good side of its balance sheet.

But it meant that the Fed was “printing” money and using the ersatz cash to buy bonds. It was like having a drunken bidder at an auction… with an unlimited supply of counterfeit money.

And all around the world, other banks were forced to “print” new money in order to keep up with the U.S. on its way down.

That is, they all had to inflate to depreciate their own currencies. Otherwise, their export and tourism industries would suffer from their high-priced money.

Altogether, the world’s 20 leading central banks increased their assets (by adding new money to the world’s monetary base) 23 times over the last 30 years – from less than $1 trillion in 1987 to over $19 trillion today.

Even now, after nearly two years of “normalization,” the Fed’s key lending rate is still below the level of consumer price inflation. And the world’s base money supply continues to grow three times faster than GDP.

That is the real source of the stock market’s gains… and the phony prosperity the U.S. now enjoys.

It’s the real cause of the high-pressure zone that has chased away the clouds and completely misled the U.S. president, who believes the fair skies will last forever.

“The American economy is booming like never before,” he told the UN.

But he was right.

Never before has so much fake money created so much fake prosperity and faked out so many people – including the president of the United States of America.

Tomorrow, we put on our rain gear… and take a look at the forecast.

The number of older Americans declaring bankruptcy has tripled since 1991…

That’s the story of today’s chart, which maps the percentage change in bankruptcy filings per 1,000 people by age group since 1991. 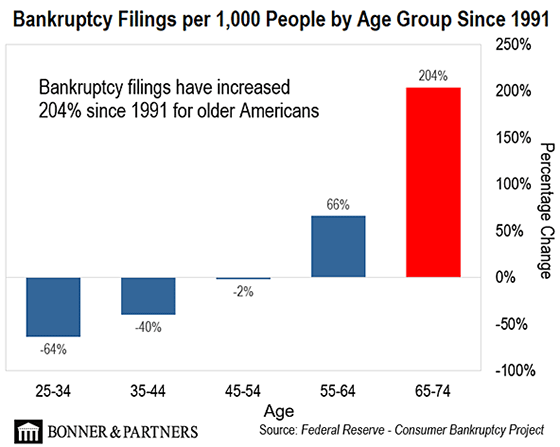 Among the reasons cited for this dramatic increase in bankruptcy for older Americans: vanishing pensions, soaring medical expenses, and inadequate savings.

The study concluded that a “structural shift” has transferred financial risk away from government and employers to individuals.

One Fund Manager’s Plan to Save Sears
Retail store Sears is failing. The stock price hovers around $1, an 87% drop over the past year. But one fund manager has a plan to help Sears. It’s probably just a coincidence that the plan would also deliver $1 billion to his fund…

This Is What Kills the iPhone
The smartphone in your pocket will soon be obsolete. In its place will be a piece of sci-fi tech that’s right off the movie screen. Jeff Brown, Bill’s top technologist, shows why the future of consumer electronics will be smartphone-free.

Blockchain: A Crash Course
Many know blockchain as the technology underpinning cryptocurrencies like bitcoin. But that’s about it. What is blockchain? How is it being used? Here’s a refresher…

Today, a mixed mailbag: Trump, China, and the failures of the Supremes…

Maybe you should stop “attempting” to outthink a man who has already done more for our country than the last dozen presidents combined (while having to combat every single Democrat in Congress, as well as 90% of the “media” with their constant lies and made-up stories regarding his personal life).

In a country such as ours, with an actual thriving prison industry, how can we be surprised the feds are calling the trade shots? In fairness, however, Bill should rake the Chinese over the coals for their eventual bombastic disruption of world trade in the South China Sea, where trillions of goods flow each year. Just create islands and claim the territory. Who is worse, Bill?

I follow your commentaries and observations regularly (which I enjoy, thank you), note the egregious and “unconstitutional” current American circumstances you point out in this and other letters, and wonder what it is that holds back the revolution that would seem to be inevitable and urgent from your commentary. Your message, it would seem, is not reaching those who might act on it – or alternatively, no one is really feeling the stringencies you proclaim sufficiently.

Bill, if all a “conservative” Supreme Court judge has to do is strictly apply the Constitution, do we even need a Supreme Court? Surely, with today’s computing power and artificial intelligence, cases could be decided in seconds and approved by a single magistrate.

Or is it possible that complex issues affecting health, commerce, and the environment require judges who can thoughtfully interpret the intent of a two-and-a-half-century-old document in the context of a modern society that would be unrecognizable to the Founding Fathers?

Ah the suspense! Did you get your bag that you left on the plane back? Inquiring minds want to know.

Note From Bill: Yes… But it was an ordeal.

The president campaigned on a promise to provide America with an infrastructure project to jumpstart the economy. Most assumed that would mean new roads, bridges, or tunnels.

But leaked White House documents suggest the White House might have something else in mind entirely… Details here. 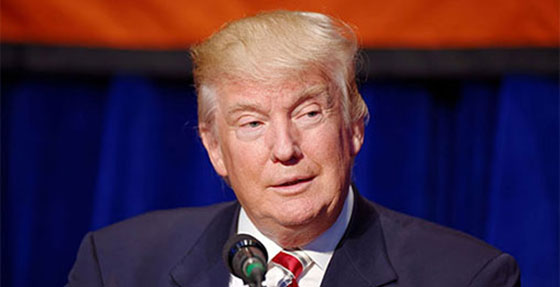