YOUGHAL, IRELAND – And here it is… tomorrow is already today.

And we’ll give it to you straight.

How come people care about fairies and Super Bowls and Brexits… and falling in love?

Hold that question. Let’s first glance over at the financial world for just a second.

Last month’s jobs report was said to be outstanding. But what is curious about the job situation is that the U.S. is adding beaucoup jobs when it was supposed to be already “beyond full employment.”

How is that possible? How come these people don’t already have jobs?

The jobs report now being applauded as proof of a robust economy is two parts claptrap and one part fraud.

What’s really happening, we believe, is that “full employment” was achieved by simply disappearing 16 million workers over the last 10 years.

They’re not counted as part of the labor force because, after the crisis of 2008-2009, they weren’t able to find jobs! Now, they are dribbling back… mostly to low-paying “gig” work.

Typically, that’s what happens at the end of an expansion. Unemployment reaches its nadir just as the expansion reaches its apogee. Then, the planets roll over… growth goes negative… and unemployment goes up.

Already, mounting auto inventories and slumping house sales suggest that the expansion may be reaching its end. This is nearly the longest recovery ever recorded; a recession can’t be long coming.

But let’s leave that… where only time will tell anyway… and return to more fundamental issues.

The hardware we know as “human” – the bones, the meat – was apparently developed by billions of years of adaptation, mutation… and perhaps divine intervention.

We don’t know exactly how or why it worked the way it did… but it delivered to us the wreck we know as “human beings.”

And you are perfectly within your rights to fill in the missing knowledge by saying: “God created man.” And perhaps He did.

If so, you can blame Him or praise Him. But the process by which He made us appears remarkably “hands off.” That is, the bone record looks like a lot of fumbling and bumbling… trial and error – the same process we see in the rest of the natural world.

From Lucy to all manner of knuckle-dragging bipeds… from monkey to man… with plenty of dead ends, false starts, and mutant ninja turtles along the way – the process can be described as “evolution,” even without knowing why it goes in the direction it does.

[No point in writing to your editor and telling him that you KNOW how the whole thing works. He won’t believe you.]

The more interesting and controversial point is this: The human software was created in more or less the same way.

Why do we think what we think? Why do we smile? Why do we shake hands, or say please and thank you?

Again, there are oceans of ignorance on the subject. But on our little patch of dry land… the process that gave us our thoughts, our instincts, and our emotions looks a lot more like evolution than anything else.

We didn’t think our way to falling in love any more than we thought our way to having five fingers rather than seven, or to wanting to eat fried foie gras rather than raw sewage.

And if you are puzzled as to what this has to do with the money world, please bear with us. We warned you… this was going to be a challenge.

But why do we bother to think any of these things? “The mind is just the heart’s dupe,” wrote André Gide.

Your thoughts are brought to bear as your instincts and emotions – your heart – commands, not the other way around.

What you think is what your software tells you to think. Of course, there’s room for “creative” thinking… or thinking “outside the box”… coming up with ideas that seem to be contrary to your basic instincts and well-being.

And sometimes you are faced with choices your brain has to figure out, more or less, on its own.

You may even think that falling in love is not such a good idea. You may decide not to marry and not to have children.

You may come to believe you can jump off of a cliff, flap your arms, and fly. You think… and therefore, you are flying!

You don’t do yourself any favors with this sort of fantasy… but you do the human race a useful service. You eliminate your DNA from the gene pool! That software, in other words, is taken off the shelf. Not because it’s good or bad; it just doesn’t work.

The population that exists today is the product of people whose parents probably fell in love, wanted to have children, and didn’t jump off the ledge. And their software – instincts, emotions, social conventions, traditions – is our software.

And among the most powerful, most atavistic, and most disastrous of our programming is the instinct that made the Super Bowl, the Crusades, The Wall, and WWI so popular: us versus them.

The “us” and the “them” vary with fads and fashions. Christians vs. Jews, Protestants vs. Catholics, Blacks vs. Whites, Red vs. Blue, Rams vs. Patriots, etc., etc.

Small-business sentiment in the U.S. has plunged to its lowest level since before Donald Trump was elected president…

That’s the story of today’s chart, which tracks the WSJ/Vistage Small Business CEO Confidence Index from the start of 2013 through today.

This index is based on a survey of 765 small firms with up to $20 million in revenue across various industries. The CEOs of these firms are asked questions about the state of the economy as well as their revenue, hiring, and capital investment expectations.

A reading above 100 indicates a positive outlook… And a reading below 100 suggests that small businesses are concerned about the economy. 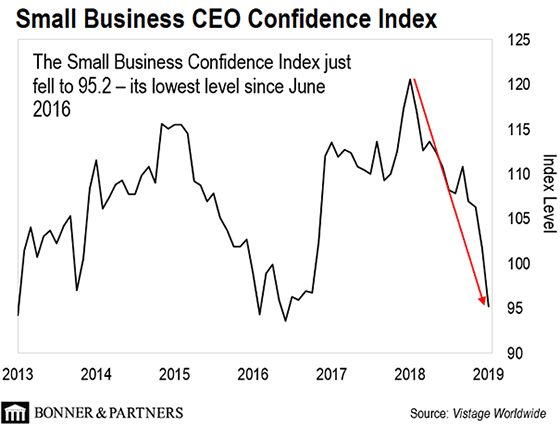 As you can see, small-business sentiment was robust throughout 2017 and 2018… But small businesses are now worried about their economic prospects in 2019. This is the first time since the Trump election that small firms are more pessimistic about their prospects than they were a year earlier.

According to the January survey, many small businesses plan to scale back their hiring and investment plans this year. And some are reporting early signs of slowing sales.

When asked about their main concerns, many CEOs said that unstable financial markets, tariffs, slowing economic growth, and an extreme 2020 presidential election cycle make them cautious for the coming year.

Uncertainty is the common sentiment. After two banner years, many small firms would prefer to play it safe while watching the big picture unfold. In fact, one CEO responded: “It’s batten down the hatches; hold on to your cash… We are playing super-conservative with our cash.”

That strikes us as wise advice.

The S&P 500 is now up 8.7% on the year, but we have been warning that this snap-back rally could be a trap for investors.

Declining small-business sentiment can lead to slower economic activity and that would likely translate to a fall in stocks. Take caution.

American Infrastructure: A National Humiliation
Tonight is President Trump’s State of the Union Address. The president is expected to make a push for renewed investment in American infrastructure. And he could find bipartisan support. By many standards, America’s roads, airports, and trains are an embarrassment…

Goldman Sachs: We Might Have Hit the Top
January was a phenomenal month for U.S. stocks. After plunging in December, the S&P 500 is up more than 16% since then. But if you missed out on the rally, you might have missed the whole year. Goldman Sachs’ warning to investors hoping for more gains: Don’t hold your breath.

In the mailbag: AOC… The Wall… and is America still the “good guy”?

And who can blame the millennials and many of their parent boomers for advocating socialism? In their lifetimes, they have seen the U.S. spend on anything and everything, and the bill never comes due! It’s magic; the spending goes on seemingly ad infinitum. Now, seriously, if there is no repercussion on spending to oblivion, why hold back? Yes, we tell ourselves there will be hell to pay, but I’m 66, and it hasn’t happened yet. I thought it would happen 30 years ago… Who is the fool? Best always.

I think you’re missing the point. It is definitely not just The Wall or any other media fodder being fed to all of us. There is a very good reason to pay attention to what you do, what you’ll be allowed to do, and what you will be directed to do, (without even realizing it). Personal freedom is being handed over one checked agreement box at a time.

I find it fascinating that an occasional “dear reader” will disclose that she sincerely believes that when “the odious one” (DJT) pushes for his “Wall”, that he is “keeping his campaign promise.” I know of a “promise” that he is not keeping: He said he would “do something” to help us old folks regarding the sky high prices of our drugs. There is not one “peep” on his twitter about this issue. Of course, “we” know why – he keeps his “show” going by picking fights with anyone and everyone NOT allied with the Deep State.

Reading Mike R.’s posting about socialism, I scratched my head in wonder. Back in 1970, I told my father socialism will come to America and his response was precisely like Mike’s. I told my father it will not occur through war but will occur at voting booths. Looking at today’s youth we find 49% believe in socialism or communism. This scares me and I agree with Mike… we should never allow this.

What a dumb question. America hasn’t been the good guy for more than a century… since getting corrupted into the globalist money printers’ dog of war.

Meanwhile, some sharp-eyed readers catch a mix-up from yesterday’s Diary…

Hi, Bill. That football match in Dublin between England and Ireland (all Ireland by the way) was not a soccer match. It was a rugby match played with an oval ball, not a million miles different from American football.

I have always “believed” in Bill, but he’s dropped the ball this time. Or rather, he has his balls all mixed up. Soccer is played with a round ball and rugby is an oval ball. They score goals in soccer but tries in rugby. The game on Saturday was a rugby one. If he’s got this wrong, can I believe another word he writes?

Jeff says 99% of investors will miss out entirely on this opportunity. But for those paying attention, they stand to make a small fortune. Click here. 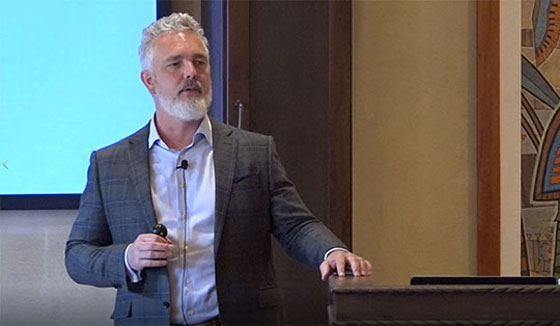