BALTIMORE, MARYLAND – The last days of 2018 are dwindling down. Today, the sun reaches its lowest point on the horizon, in the Northern Hemisphere.

And stocks continue to sink.

One reason cited for the continued selloff on Wall Street was the looming “shutdown” of the federal government.

Large parts of the federal government lurched toward a shutdown Thursday after President Trump told GOP leaders he would reject a short-term deal to keep the government open unless it contained money for border security.

In an emergency meeting with House Republican leaders, Trump said he would reject a measure passed in the Senate that would fund government operations through February 8 but deny Trump any new funding for a wall along the U.S.-Mexico border.

“The president informed us that he will not sign the bill that came over from the Senate last evening because of his legitimate concerns for border security,” House Speaker Paul D. Ryan (R-Wis.) said at a news conference after the meeting.

Treasury secretary Mnuchin had a different interpretation. From Bloomberg:

“I think the market reaction is completely overblown,” Mnuchin said Thursday in an interview with Fox Business Network, following the prior day’s Fed action and press conference by chairman Jerome Powell. “I think that the market was disappointed in the chairman’s comments.”

The shutdown doesn’t worry us. It may rattle investors. But it won’t do any serious harm to the economy or its people. The government is a consumer, not a producer. Generally, the less it consumes, the better.

So a shutdown may actually be a positive. Especially if it lasts a long time.

Like Mr. Mnuchin, we’re more focused on the Fed. That’s where we’d welcome a permanent shutdown.

As you will recall from yesterday, the Fed hedged and weaseled on Wednesday. It stuck to its “tightening” script with another 25 basis points of a rate hike.

But it also signaled that it might not follow through with the whole “normalization” program. Or that it might just decide on a “new normal” substantially below the old normal.

Now, it has only half that number. Some economists argue that 250 basis points – 2.5% – is a near-neutral rate. That’s supposed to be the rate that neither pumps air into the bubble, nor lets it out.

How do they know what the neutral rate is? And why is a neutral rate desirable? Mere mortals cannot answer those questions. You never know what something will sell for – especially something that hasn’t traded in a free and open market for the last 30 years – until you put it up for sale.

That is as true for interest rates as it is for a 1957 Chevy.

But our guess is that if the Fed stopped meddling in the credit markets, the price of credit would soar.

It’s only because investors expect more EZ money from the Fed that they are willing to buy government debt at such low yields. If that expectation were to vanish… and if the federal government suddenly had to rely on actual savings, lent voluntarily, to cover its deficits – that is to say, if the feds had to finance their deficits honestly – well, the whole ship of state would sink like a stone. And the stock market, too.

Even as it is, the Fed is paddling a leaky boat. In order to refloat the economy of 2009, it threw every one of its basis points overboard. That kept heads above water. Barely. It also produced only the weakest recovery ever seen.

What will happen when the next crisis hits? In a matter of seconds, the Fed will have exhausted all its ballast. Then what?

Yesterday, we watched the stock market action closely. We were wondering which way investors would take the Fed’s announcement. Would it reassure them that the Fed was ready to halt its rate increases? Or not?

It looked like they couldn’t decide. But by the end of the day, the Dow was down another 464 points.

From our point of view, the Fed’s intentions are pretty clear. It will raise rates when the coast is clear. When the seas get rough, it will cease raising rates and begin to cut them again.

Many investors will take this as assurance that the Fed still has their backs. But we aren’t so sure. By the time it breaks out the lifeboats, many investors will already be in over their heads and going down to the bottom.

And then, there is no reason to think that lopping off a mere 250 basis points will be enough. It took 500 of them to do the trick last time – with less debt to overcome… and no talk of a shutdown… or a trade war…

How will it turn out? We think we know. Stay tuned for our 2019 predictions… coming on January 2.

In the meantime, move to the country… rack up some firewood… bounce the grandchildren on your knee in front of the fire.

And, oh yes, switch from stocks to gold… and enjoy the holidays.

Earlier this week, we showed you how the Russell 2000 “small cap” index was already in bear market territory, having plunged 21% since August.

Today, we have a new development…

With this week’s selloff, some of the largest U.S. companies in the S&P 500 are now in bear market territory…

Today’s chart maps the performance of eight of the largest U.S. stocks by market cap since hitting their 52-week highs earlier this year. 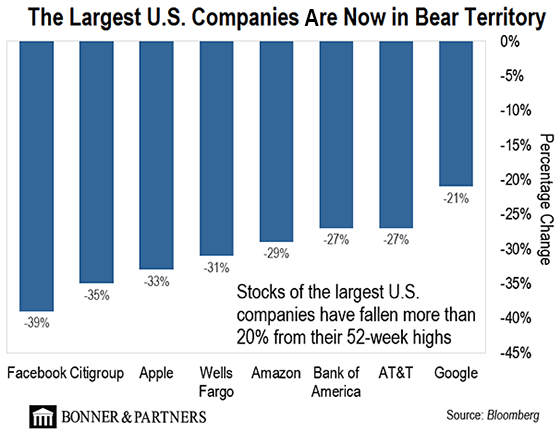 As you can see, Facebook, Citigroup, Apple, Wells Fargo, Amazon, Bank of America, AT&T, and Google are each in bear market territory, having fallen more than 20% from their 52-week highs.

Apple, Amazon, and Google are three of the four largest companies in the U.S., each with a market value of more than $700 billion.

And Facebook, Wells Fargo, Bank of America, and AT&T are four of the 25 largest U.S. companies, each with a market value greater than $200 billion.

In other words, the market generals are falling hard – an ominous sign.

The S&P 500 has not yet fallen into bear market territory – it is only down 16% from its September high. But with its largest constituents falling hard, it seems only a matter of time before the S&P crosses the dreaded 20% mark.

P.S. Bill has been sounding the alarm on stocks all year. It’s why he collaborated with other Legacy Research Group editors to prepare the “Ultimate Crisis Playbook.” It’s a 100-page report filled with actionable advice from more than a dozen financial experts. The report is designed to do one thing: help you survive and thrive in today’s falling market. Readers of The Bill Bonner Letter are invited to access that report here. And if you’re not a member, go right here.

“I’m Okay With a Shutdown.”
As Bill wrote above, the United States government is on the verge of a partial shutdown. How did we get here? And what happens next? Read on…

It’s Not Just America
All eyes are on U.S. markets as the major indices approach bear market territory. But on the other side of the pond, things are even worse. European stocks are poised to have their worst year in a decade.

What to Buy When the Market Goes Nuts
As Joe Withrow mentioned above, U.S. stocks are plunging. In addition to holding gold, here’s another strategy investors should consider…

In the mailbag, dear readers try to decipher the Fed’s motives…

I don’t know whether the Fed will continue to raise interest rates much or at all from here, but the one perspective I’ve not heard is do you suppose the Fed knows raising rates will bring on recession and it is doing so to dispose of Donald Trump?

Hi, I’ve been reading the Diary for about a year now, enjoying your take on things and your writing in general (despite the somewhat gloomy outlook on the financial future). And I have a question. You talk about the three mistakes the Fed makes, and specifically, Mistake #2, raising the rate, which you claim would cause a severe recession and maybe a crisis, which will, in turn, bring Mistake #3.

Do you consider a possibility where rates are raised slowly enough to allow a mellower unwinding of the market and a recession that will not turn into a crisis? Is there no sweet spot where the rate the rates are increased at is slow enough to let prices fall gently enough to not cause a complete collapse? Looking forward to your answer.

Yes, we care, and the Fed didn’t move the scale. It should have lowered the rate by an eighth. Housing, auto, and small business borrowing has suffered because of the Fed. The chairman has no logic or common sense; he should be fired. I could do a better job.

The Deep State and the Federal Reserve are one in the same (private citizens not accountable to the electorate), yet steering the boat without a care. It’s always a win-win for them. Between the Fed and liberal progressives, they have already dismantled the best experiment in human cohabitation. The world will miss the USA looking back through the lens of history. Like Atlantis’ story, they will wonder how such a great concept got washed off the face of the Earth.

If you’re worried about falling stocks, then you need to read this.

Dan Denning, Bill’s coauthor on The Bill Bonner Letter, recently published what he’s calling “America’s No. 1 Portfolio Protection Plan.” Dan details what’s at the heart of today’s selloff, and shows you actionable ways to protect your money from falling stocks. Get it right here. 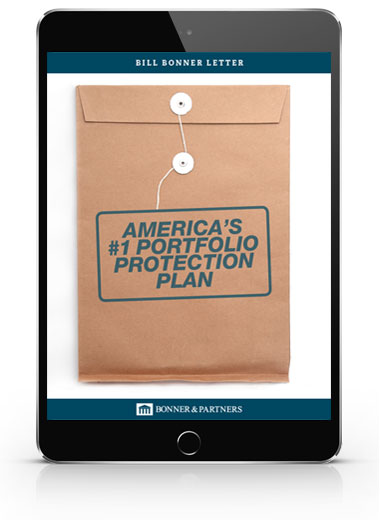