BALTIMORE, MARYLAND – Well, we were wrong. We figured the Fed would pause now. Instead, it went ahead with its rate hike and suggested it would pause in 2019.

This was widely expected by the markets, if not by us. Early yesterday, investors guessed – as we did – that the Fed would back off. They bid up the Dow by 350 points.

Then, when the news came out, they went the other direction… selling off by 700 points… to leave the Dow down 351 points, a new low for the year.

The Fed not only raised its key interest rate by 25 basis points; it also said that the economy may not be as strong as previously reported. And spirits visibly darkened in Lower Manhattan. From The Washington Post:

…widely expected [was the] move that President Trump has called “foolish” but that the central bank felt was necessary to keep the U.S. economy thriving. But the Fed also downgraded its economic outlook for 2019, triggering a steep sell-off in markets.

In a signal that head winds are rising, the Fed lowered its growth forecast for next year from 2.5 percent to 2.3 percent and indicated it would only do two interest rate hikes in 2019, down from its earlier forecasts of three hikes.

And from Duluth News Tribune:

…Powell acknowledged there is a “fairly high degree of uncertainty” about where the economy and rates are going. Powell specifically pointed to a drag from weaker growth abroad and the sharp market decline in recent weeks.

The whole spectacle is both remarkably important… and sublimely ridiculous. Even with this new rate increase, the Fed is still lending at rates about even with the rate of consumer price inflation. So are other central banks. “Tightening” is more of a marketing jingo than a reality.

Still, the debt-soaked economy is so fragile that even a hint of higher rates is like adding a lit cigarette to a gasoline spill. Yesterday’s move puts stocks at their lowest point for the year… and seems set to make this December the worst since 1931.

A fairly high degree of uncertainty is what we live with in this trade. People discover prices in active trading. And people change their minds.

But when it comes to the normal uncertainty of market economies, we are encouraged to keep guessing by the rather predictable patterns of political reality. That is, we might not know what Mr. Market will do, but we still think we know what Misters Trump and Powell will do.

As to the former, he has made no secret of it. He’s a “low interest” guy. He wants lower interest rates. And he’ll do all he can to make sure Mr. Powell takes the blame if he doesn’t get them.

As to the latter, Mr. Powell, he’s no dope either, but much less of a showman. He just doesn’t want it to look like he is under the president’s thumb. Our guess is that he would have preferred to make his pause yesterday. He did not, because he could not be seen to compromise the dignity and independence of the Fed, as if there were any left.

And now, Mr. Trump will continue calling for lower rates (perhaps not realizing that it was rates that were too low for too long that caused this mess – the Fed’s Mistake #1).

And Mr. Powell, not knowing any better either, will continue watching the ticker tape… sometimes buoyed by unwarranted optimism, and often dashed to the ground by the unrelenting reality of falling prices.

Poor Mr. Powell has continued the loony “data-dependent” path of his predecessors. Which means, rather than normalize interest rates as a matter of principle, he’ll fold up like a lawn chair when the going gets rough, as a matter of expedience. That’s when the data tells him to get off his duff and lower rates… and Mr. Trump calls him a fool for not doing it sooner.

Only Mr. Market, inscrutable as always, remains unpredictable. Which is too bad. He’s the only one with any sense of dignity or integrity.

But while we don’t know what he will do, we do know he has a wicked sense of humor. And an abiding sense of justice.

He lays banana peels on the pavement and waits for the conmen and the clowns… the drifters and the dreamers… to come along.

Misters Trump and Powell should be there soon.

MARKET INSIGHT: NO SIGN OF A SANTA CLAUS RALLY

As Bill wrote in today’s Diary, this is set to be the worst December for stocks since 1931…

That’s the story of today’s chart, which maps the S&P 500’s worst December performances in history. 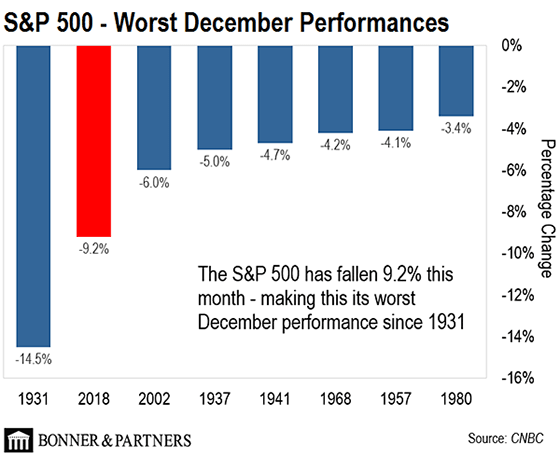 And this month’s drop is a full three percentage points worse than the next-worst December performance, which came in 2002.

We share this insight because December is traditionally one of the best months for U.S. stocks. A so-called “Santa Claus rally” can often lift stock prices higher.

Over the last 30 years, the S&P 500 has averaged 1.8% returns during the month of December. During that time, the index has also closed in positive territory for the last month of the year 80% of the time.

According to master trader Jeff Clark, this is what it looks like when the market is transitioning from bull to bear.

Here’s what he told his Market Minute readers earlier this month:

The stock market is changing character…

This action feels quite similar to the action in late 2007. In other words, I think we’re transitioning from a bull market to a bear market.

So, we can expect a quick bounce in the interim – markets never go straight up or straight down… but it is looking more and more like the S&P 500’s all-time high of 2,930, set in September, will be the peak of this bull market.

Big Banks’ Best Year Ever
2018 has been a rough year for U.S. stocks. As Joe Withrow showed above, the S&P 500 has so far dropped almost 10% in December alone. But at America’s biggest investment banks, there’s reason to celebrate. Giants like JPMorgan Chase and Goldman Sachs just had their best year. Ever.

Yep. Facebook Gave Your Data to Other Companies
New documents reveal a not-so-surprising fact. Social media company Facebook regularly shared user data with up to 150 companies including Microsoft and Amazon. And here’s the kicker: They broke their own privacy rules to do it.

Declare Your Digital Rights
Do you believe you have a right to privacy online? Do you believe that your personal data is your property and should not be hawked by the Silicon Valley elite? If so, declare your digital rights today…

In the mailbag, a dear reader suggests a name change for America’s central bank…

Maybe the creature from Jekyll Island should be renamed the Swamp Thing. I hate to go all Ron Paul, but isn’t the Fed sort of the head of the Swamp? And wouldn’t draining the Swamp be better served by first auditing the Fed? And if the rationale for the creation of the Fed was to temper boom/bust cycles, wouldn’t it be best to take this failed experiment behind the barn? Is there really ever any hope of a return to fiscal sanity in America without dismantling the Fed, repealing the 16th Amendment, and returning to the gold standard? I suppose only God Himself can put the genie back in the bottle. So I’ll just ride the illusion with everyone else and patiently wait for Armageddon. Merry Christmas.

He is expected to sign a key piece of legislation some time this week. And when he does, it’ll kickstart a tiny market with huge potential. 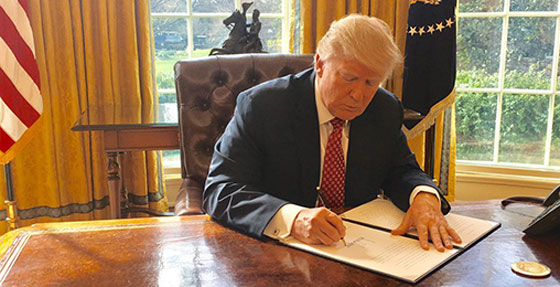