PARIS – What happened yesterday to cause the Dow’s worst one-day point drop in history?

The wires, airwaves, and ether are full of conflicting analyses and opinions. Take this sample of headlines from Bloomberg:

Revenge of the Robots?

We write before today’s opening bell.

The CBOE Volatility Index, or VIX – Wall Street’s so-called fear gauge – was up 84% yesterday. It was the largest daily spike ever recorded.

The VIX rises along with investors’ expectations of dramatic price swings (aka volatility). In other words, investors see further drama ahead.

And overnight trading predicts a 1,000-point drop in the Dow this morning.

Joe Withrow, who heads up our research department, probably had the best comment:

What fun! At one point, the Dow fell 1,000 points, bounced 600 points, and then dropped 400 points again in less than 30 minutes. That has to be robo-trading. Humans just don’t move that fast.

I tend to think you are right that this isn’t the start of the big one. Recent history says we are going to have a couple of these mini-corrections before the big one comes. Then things will get really interesting…

The classic part is the plunge in stocks.

That is bound to happen. Everybody knows it. And your average investor says he is ready for it.

When stocks begin to slide, he says, he will get out. Then he will be ready to get back in when the correction – which he expects will take stocks down by about 10% – is over.

He will “buy the dip”… and profit from the big rebound.

The not-so-classic part is the more fascinating drama. And here is where we introduce our tragic heroine.

For in the midst of the market storm was a voice of demented calm, coming from a meteorologist who couldn’t see the clouds approaching or feel the wind blowing in her hair.

Ms. Janet Yellen just retired from running the Fed. Yesterday, she took up her new sinecure on Think Tank Row in Washington, D.C.

In her new role at the Brookings Institution, she will continue to keep an eye on the economy and make absurd comments for the press from time to time.

But on Friday, CNN – never known for its critical judgment – gave her a laudatory retirement send-off:

Millions of Americans are back to work, and they have Janet Yellen to thank.

“There’s less to lose sleep about now than has been true for quite some time, so I feel good about the economic outlook,” Yellen said during her final press conference in December. “The labor market is in a very much stronger place than it was eight years ago.”

Yellen proved to be a deliberate, careful leader as she helped steer the economy through a dangerous time – the years between a historic recession and something close to a normal recovery.

In the center of this celebratory, sycophantic drivel came a poetic flash from the newsroom: “Dow plunges 666 points – worst day since Brexit.”

Any American who wishes to thank Ms. Yellen for jobs can save his breath. She didn’t create a single one, unless it was someone parking cars at the Eccles Building.

What she did do was stick with the program that has left more adults unemployed than ever before… reduced net fixed investment per employee, thus stifling output… and almost surely suppressing real wage growth.

Future historians will have to debate the issue: Who did the most damage: Greenspan, Bernanke, or Yellen?

Mr. Greenspan set the trend in motion by intervening heavy-handedly after the “Black Monday” stock market crash in October 1987. Mr. Bernanke amplified it with his response to the 2008 plunge. And Ms. Yellen carried it along to what now appears to be an important turning point.

Together, they aided and abetted the ramping up of debt to levels not seen since the end of World War II.

When Mr. Greenspan took over at the Fed in August 1987, the government owed about $3 trillion… or about 40% of GDP.

Household and corporate debt levels have shown similar expansions. Overall, for the last 30 years, total (private and public) debt has grown about twice as fast as the economy that supports it.

That is what makes the coming correction more dangerous than a routine market pullback.

Based on the historic relationship between debt and GDP, we estimate that some $30 to $35 trillion worth of asset values – stocks, bonds, collectibles, private businesses, and real estate – is unsupported by real output.

Worldwide, the figure is probably $100 trillion.

And now, hundreds of millions of people depend on the EZ money economy created by Greenspan, Bernanke, and Yellen. Their jobs, their incomes, their investments, their retirements – all depend on keeping the fantasy alive.

As Joe puts it, watching the resolution of this drama is going to be “really interesting.”

P.S. As Bill reported in his January 18 Diary, the Bonner & Partners Doom Index hit an “extreme warning” level last month. To catch up in full on why this caused Bill to dust off his old “Crash Alert” flag, read on here.

Is the “Trump bump” for stocks over?

Since Donald Trump’s election, the S&P 500 has trended relentlessly upward.

But as today’s chart shows, the “Trump bump” has recently started to fade. 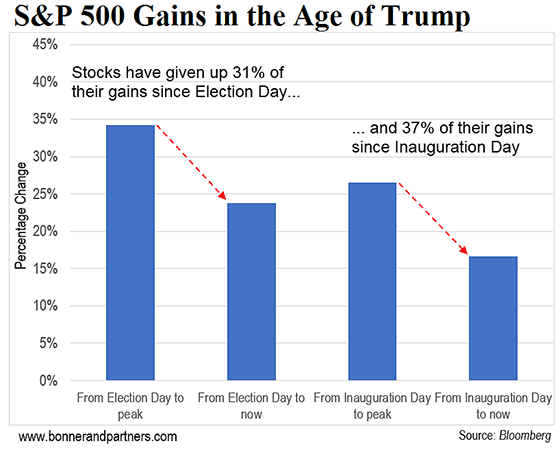 U.S. Debt Skyrockets
As Bill mentioned, debt is set to soar in the coming years. The U.S. government is on track to borrow $1 trillion this year, up 84% from last year.

The New Permanent Portfolio
As yesterday showed, nobody precisely knows what the future will hold. Here’s one way to prepare your portfolio for the unpredictable.

In the mailbag, a reader proposes a solution to America’s trade problems…

In your Diary about the “War on Washing Machines,” you lay out the way it should work very neatly. In reality, it has not worked for the workers. Like everything, it comes down to money. It’s cheaper to manufacture nearly everything overseas. We can’t compete. The last trade surplus was in 1975. The only solution is to use a barter system with no money changing hands. It would be your favorite deal: win-win. Everybody wins. The American worker must create products to trade.

I enjoy your wit and take on humanity, mostly because it makes me think. I think it is a good thing you are rich. Rich, but nuts, and you’re proving it by buying that deathtrap. So are you super intelligent or just nuts? I am just nuts; it keeps me from going crazy. I’m a faithful reader and I can tell you that yes… it rains in Florida. Maybe you could buy some land here. We will even throw in a rowboat for free for when it rains.

Ah, Bill Bonner, the lover of shaky title histories! You just can’t help yourself, can you? You went to Ireland and actually LOOKED FOR another originario nightmare, didn’t you? The “new” house was abandoned. And now you want to buy it. From whom? I hope you take out title insurance (pronounced “anshowance” in Baltimore, but I’m sure you know that already). Best always.

Will you be joining Bill this Thursday?

“The Legends of Finance Summit” is slated to be one of the biggest online events in our company’s history.

The event is free to attend, but you must reserve your seat. You can make your reservation right here… 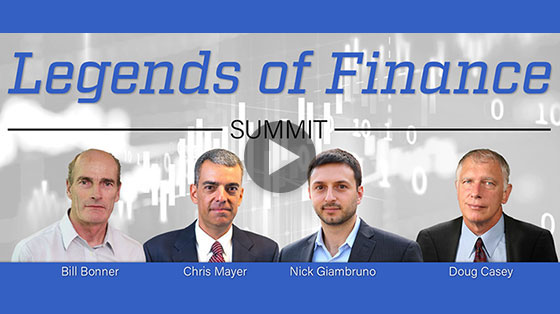