Everything changes. A generation gives way. A new one takes over. The moon doesn’t stand still for long. Fresh milk in the bucket goes sour. And the bright young man becomes a grumpy old coot. He finds his thrill. And then he loses it.

One shocking change came to light last week. We introduce it with a question: When did Americans become the “bad guys”?

When President Wilson went to war with Germany for no apparent reason other than his personal glory?

When the U.S. Army massacred 160 Arapaho and Cheyenne Indians (mostly women and children) at Sand Creek in 1864… or when Lieutenant Calley led a slaughter of 500 at Mỹ Lai in 1968?

No point in asking the question now; we’re just doing future historians a favor. In their simple-minded telling of our time, the question is bound to come up.

As the world turns, winners become losers. When the U.S. loses its next serious war – probably with China – when America’s lard-loaded military is humiliated by a leaner, more technologically advanced enemy – historians will look back to figure out when the country went bad.

That was when the feds were concocting absurd and murderous plans to kill innocent Cuban refugees in the U.S. so they could blame it on Fidel Castro. The Miami New Times reports:

Donald Trump’s bold promises earlier this week to finally blow the lid off the JFK assassination mystery by declassifying reams of secret documents turned out to be a gigantic tease. The National Archives ended up making public only a fraction of the JFK documents last night.

Still, the 2,800 papers included in the new document dump confirm some salacious details of America’s decades-long quest to kill or depose Fidel Castro – including a fairly shocking plan by the CIA to sow terror in Miami. […]

The paper was sent by Gen. Edward Landsdale, a top Cold War officer who worked with the CIA to plot out Operation Mongoose; he sent the report, which included nine other “pretexts,” on April 12, 1962, to Gen. Maxwell Taylor, who would soon become chairman of the Joint Chiefs of Staff. Here’s how the report described the plan:

We don’t know how seriously anyone took this memo. But if this is in the documents that were released, we have to wonder what is in those that weren’t released.

Donald Trump, bless his heart, promised to open the files from the Kennedy era to put to rest the many conspiracy theories around the Kennedy assassination.

That was until the Deep State gave him a serious talking-to. What was said, we can only imagine:

“Are you crazy? Let people see what we actually do? We’ve got a pretty sweet gig here. Let’s not blow it… better to let the voters think we are protecting the country.”

Instead of putting conspiracy theories in an airtight tomb, he has given them a burst of oxygen.

After all, why withhold records from more than half a century ago? What have they got to hide?

There is no plausible “national security” reason to keep them under wraps. Is there anything in them they don’t want foreigners to know?

Much more likely, there’s something they don’t want Americans to know.

We have a theory of our own: The feds are conspiring to keep people in the dark. They don’t want us to know how murderous, incompetent, and corrupt they are.

We might start asking questions ourselves… about how and when the bad guys took over… and why those bad guys are still running the place.

The bull market on Wall Street shows no signs of letting up.

The S&P 500 hit another all-time high on Friday.

It’s the 50th time this year that the index has hit a new record. 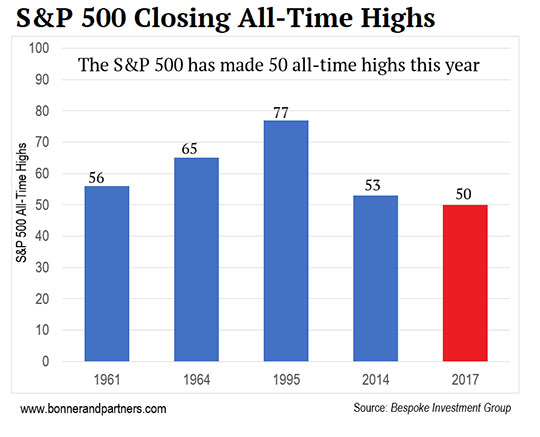 That would be the third most ever. But still well short of the high-water mark set in 1995, during the dot-com boom.

The New American Monopolies
America has a monopoly problem. For many industries, there are massive concentrations of power in a handful of companies. And it’s wreaking havoc on the consumer.

Bill on Bitcoin: Better than Gold?
Over the weekend, Bill sat down with crypto investing expert Teeka Tiwari. The two discuss their views on the growing world of cryptocurrencies. And Bill poses an interesting question: Is bitcoin better money than gold?

So You Want to Invest Like Buffett?
Warren Buffett is one of the most famous and successful investors in history. But if you want to invest like the Oracle of Omaha, there are a few things you need to know.

In the mailbag, one reader weighs in on “fake money.”

You asked in your latest missive: “What dopey jackass first came up with the idea that you could improve a market economy by feeding it fake money?”

Wasn’t his name John Maynard Keynes? Or is this a rhetorical question? Keynes was regarded by his contemporaries as an economic genius. The jury is still out on that one…

One of Keynes’ critics was Friedrich Hayek of the Austrian school of economics. I recommend reading or re-reading his The Road to Serfdom, one of the very best books on economics and politics ever written. The anger and frustration of the American people can be better understood as the U.S. continues to march down our own road to serfdom.

You arrived in Lisbon about the time I left. I am not sure why you would want to invest in Portugal. The banking system is interesting. It’s mostly corrupt through lending to related parties. That includes Opus Dei in the case of Millennium BCP. It’s all under the watchful eye of the (central) Bank of Portugal.

We already know you like meat. Portugal is famous for fish. Try grilled fish in Sesimbra, a fishing village 30 kilometers south of Lisbon. The municipality of Sesimbra is communist and very corrupt. And you will love the placards of the communist party of Portugal. So retro chic.

Regular readers know that Bill is skeptical of cryptocurrencies, but our colleague Teeka Tiwari is a crypto investing expert. He’s very bullish on the sector and has helped his subscribers score gains of up to 20,000%. 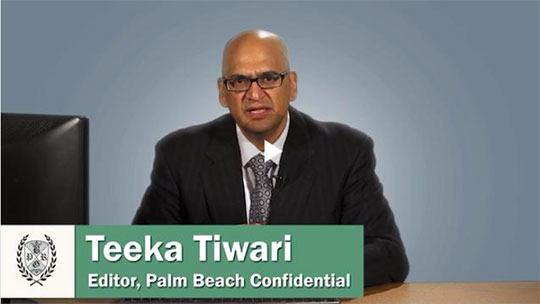