DUBLIN, IRELAND – We’ve made three bold predictions in this space:

So Far, So Good

As to the first – check. The Powell Pivot ended the Fed’s hesitant, pseudo-tightening program. The Fed chairman, panicked by the market’s decline at the end of 2018, said no rate hikes this year.

Normal Fed policy allows markets to correct. Now, there is no question that the Fed will not permit a normal market correction.

As to the second… well… so far, so good.

The negotiators are at work. Most likely, POTUS will soon announce a wonderful… beautiful… trade deal that will satisfy lobbyists and cronies while having little real effect on the economy.

It’s the third one that is most extraordinary. Modern Monetary Theory is the goofball idea – popular with Sanders and AOC – that the feds should borrow, print, and spend as much money as they want… as long as nothing bad happens.

Of course, the Soviet economy looked like a success for decades. Venezuela was rolling in money for many years. Zimbabwe was once the most prosperous economy in Africa.

There are some things you shouldn’t do… even though nothing bad happens right away. You jump out of a 30-story window. Nothing bad will happen for at least 29 stories.

Play Russian roulette with a six-shot revolver; you might get to pull the trigger five times before anything bad happens.

Likewise, as economist John Maynard Keynes once remarked, “there is a lot of ruin in a country.” Even the worst economic policy will take time to manifest itself. And even MMT may look pretty good – until something bad happens.

That’s why we have theories, principles, rules, and “best practices” – to prevent us from doing things we’ll regret when the bad stuff finally happens.

We bring it up today because the president is already edging towards MMT. We thought he’d wait until after the market crashes and the economy sinks into a recession. But no.

He’s already on the case, out in front… preparing the public to blame the Fed for the inevitable blow-up… and pushing the Fed into even loonier money policies – that is, toward MMT.

Here’s the most recent tweet from the White House:

China is adding great stimulus to its economy while at the same time keeping interest rates low. Our Federal Reserve has incessantly lifted interest rates, even though inflation is very low, and instituted a very big dose of quantitative tightening. We have the potential to go… up like a rocket if we did some lowering of rates, like one point, and some quantitative easing. Yes, we are doing very well at 3.2% GDP, but with our wonderfully low inflation, we could be setting major records &, at the same time, make our National Debt start to look small!

In short, the president thinks we need more stimulus! “Like one point…”

One thing is becoming very clear. For all the effort Donald Trump puts into being spontaneous and erratic, he is actually very predictable.

When it comes to financial matters, he will always go for EZier money, lower rates, more spending, and bigger deficits. After all, he’s a “low-interest guy.”

And this confirms our theory of history. When an empire reaches the edge of a cliff, it will always find leaders to give it a push. This is the hour. Donald J. Trump is the man. History is being made.

How close the U.S. is to the precipice is a matter of some debate. When Donald Trump was elected, there was probably still time for a strong leader to pull back… to cut spending and reduce debt levels.

Instead, Mr. Trump chose to go in the opposite direction. Now, with an aging population… an all-powerful Deep State… and government debt. When the boom ends, bad stuff happens. Stocks collapse. The economy goes into a recession.

Deficits double. Politicians and policy makers turn to fantasies… such as MMT.

And the idea that putting the fed funds rate down by a point – into negative territory – would stimulate the economy so much that the “National Debt [would] start to look small” is a scam.

Rates have been negative for nearly the last 10 years; federal debt more than doubled, while real growth rates fell.

Instead of causing a boom, 10 more years of that policy will more likely leave federal debt at $40 trillion… with the economy at the bottom of the cliff.

Last week, Bill and I told you about “the financialization of the American economy.”

While we’re on the topic of financialization and systemic risk, I’d like to bring your attention to one chart and the end of America as we know it.

It shows that the Social Security Trust Fund – which, on its current trajectory, will be completely depleted by 2035, according to a new report from its trustees – already costs more than the money earned by the trust. Have a close look below… 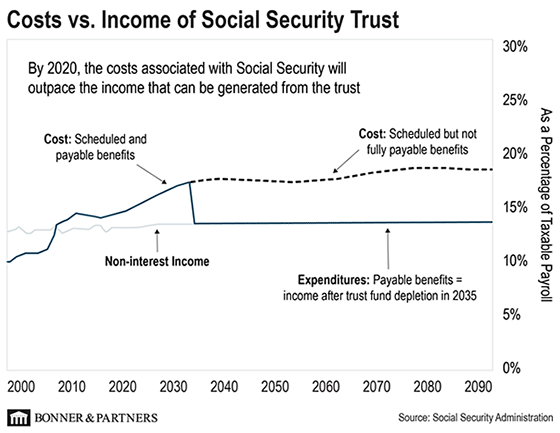 The chart looks innocent. But it’s telling you that, last year, the fund earned $83 billion in income on $2.9 trillion in assets. That income was not enough to pay benefits to eligible recipients.

As a result, it’s begun depleting the “principal” in the trust. According to the report, the trust will be “fully depleted” by 2035, unless measures are taken to replenish it.

Do you realize what that means?

It means that, without a cut in benefits or a tax raise, Social Security isn’t going to be able to pay for itself. The math is inevitable. And this isn’t my opinion.

The trust – whose official name is the old age, survivors, and disability insurance program (OASDI) – will begin running into problems next year. Here are the facts from the report:

Annual OASDI cost has exceeded non-interest income every year beginning with 2010. The Trustees project that cost will continue to exceed non-interest income throughout the 75-year valuation period. Beginning in 2020, cost is projected to exceed total income, and combined OASI and DI Trust Fund reserves diminish until they become depleted in 2035. After Trust Fund reserve depletion, continuing income is sufficient to support expenditures at a level of 80 percent of program cost for the rest of 2035, declining to 75 percent for 2093.

Translation: The trust is going bust.

Let me be really clear about two things. First, I’m not saying that you aren’t entitled to Social Security. If you’ve paid that money into the system for years, you ARE entitled to it. It’s your money.

But that doesn’t mean you’re going to get it… or that it won’t have dramatically declined in purchasing power by the time you DO get it.

Social Security Woes: We’re Running Out of Time
As Dan said above, just because you’re entitled to Social Security, doesn’t mean you’re going to get it. What’s more, even if lawmakers took drastic measures, the program’s financial shortfall would still be too enormous to avoid insolvency. In other words… Social Security has to be saved… now.

Do Banks Have a “Plastic Problem”?
Credit-card losses are outpacing auto and home loans. Though this trend continues at a rate not seen in at least a decade, there’s no cause for panic… yet. And while most want to point the finger of blame at careless consumers, it’s the banks that might have a plastic problem…

Here’s Why You Must Have Cash
While trading strategies aren’t our go-to beat in the Diary, plenty of readers are wondering “what now?” With markets like these, master trader Jeff Clark thinks readers should follow one simple rule: Have some cash.

Today, a light mailbag. A dear reader enjoyed the picture our editor painted in yesterday’s Diary, “How the Financialization Scam Works”…

Great story, Bill. One picture is worth a thousand words. This picture you painted today says it all. Great, simple stuff, but illusive to the great majority. She’s too far gone, Bill. You can only change her from the outside, and in my opinion, it’s too late for that. The 40-year fiat clock has run out of sand.

She has fallen from grace. Great work you do all the way around, on so many topics. And I love your ranch. It’s easy to see what it does to you and for you.

There’s a key metal on the verge of a huge rally… but you won’t hear about it from the mainstream media.

A radical new technology is about to take down the world’s leader of electric vehicles. And it’ll send this metal soaring in the process.

Not only that, it’ll flood one tiny, specific stock with a massive windfall, starting any day now. To get all the details on how to profit, read on here. 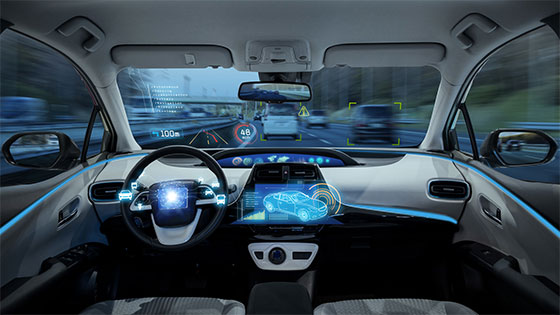