YOUGHAL, IRELAND – Yesterday was a big day for the U.S. stock market. October was forgiven. And forgotten.

All is well, because the president and the new Democrat majority in the House are going to work together…

…to rip off the American people. Here’s CNBC:

The Dow closed up 545 points, led by gains in UnitedHealth and Apple. The S&P 500 gained 2.1 percent as the health care, tech, and consumer discretionary sectors each rallied more than 2.8 percent. The Nasdaq Composite rose 2.6 percent.

“Hopefully we can all work together next year to continue delivering for the American people, including on economic growth, infrastructure, trade, lowering the cost of prescription drugs,” Trump said in a news conference. “The Democrats will come to us with a plan for infrastructure, a plan for healthcare, a plan for whatever they’re looking at and we’ll negotiate.”

Yes, Dear Reader, it is a wicked world. Some people are always ready to use force or fraud to get what they want. Hundreds of them were elected on Tuesday.

Democracy is a dangerous fantasy. The Founding Fathers had little faith in it. They had read the history of Rome. They knew they couldn’t trust the mob.

So they created a “Republic” – with a class of patrician insiders interposed between the plebes and the administration.

This seemed to work… for a while.

Then, after the 17th Amendment brought the direct election of senators in 1913, the patricians – who saw public service as a duty rather than an opportunity – gradually disappeared. The last one we knew personally was Senator Harry Byrd of Virginia, a gentleman to the end.

The trouble with an intermediary group of insiders – such as the U.S. Congress – is that it is easy prey to corruption. Instead of looking out for the American people, the pols look out for themselves… and their cronies.

Now, almost all members of Congress are hustlers… on the make, or on the take. And American democracy – though immensely entertaining, if you don’t let yourself take it seriously – is little more than a fantasy and a delusion.

It presumes that there is a race of super-smart, super-virtuous people capable of running our public affairs.

It advertises that these people can be discovered in elections by average voters, who select the best of them.

It pretends that the majority of voters get the candidates they really want… and that these politicians give the voters what they asked for.

And it imagines that a group of people is better off when its side wins.

But there is no evidence that any of these things are true.

We will pass over the first three of them… and dig into the last one.

The affairs of a modern nation of 330 million people cannot be plausibly understood, in any detail or with any insight, by a group of people who spend most of their time raising money for their re-election campaigns.

The more complex a society, the less need it has for politicians to improve it.

And there is no way for the average voter to know which candidate would be better-suited to meet the challenges ahead. First, because he doesn’t know what challenges lie ahead.

And second, because he doesn’t really know the candidates either. He only has their campaign slogans and their media personalities to go by.

Nor does the majority really get what it wants. A government is always used by the few to separate the many from their money, power, and status.

The few get contracts, jobs, credits, awards, subsidies, and payoffs, while the majority pay for them. The average voter has no interest in 95% of what the feds do… and would reject it immediately if he had to pay for it directly.

He thinks someone else pays… and that it is somehow for his own good.

Finally, the voter is urged, even shamed, to the polls as if his life depended on it. His side needs him, he is constantly told. If he doesn’t vote, the gates of Hell will open and the devils on the other side will ravish his wife, steal his money, and change the national anthem.

But politics is merely an attractive nuisance. And the connection between it and the rest of life is pernicious.

When Freddie Gray died in police custody in Baltimore in 2015, many in the black community went on a rampage, targeting the white-owned businesses downtown.

But Baltimore’s mayor was black. The Town Council was dominated by blacks. The police chief was black. The whole political structure of Baltimore was, in fact, under black control. And the president of the United States of America was black, too. As was his attorney general.

All across America, blacks had won elections by “mobilizing the base.” As a result, the insiders – cronies, contractors, employees, and pension fund managers – enjoyed a big payday.

But did this do any good for the average black voter?

Just look around the country. Which groups are the most successful? Jews and Asians. Well, how many towns are controlled by Jewish voters? How many states are dominated by Asian voters?

Jews and Asians succeed, largely, by ignoring politics. Instead, they focus on career, family, and business.

Back in the second half of the 19th century, waves of immigrants were coming into the U.S. Most of them did the best they could; they integrated… and prospered.

But one group – the Irish – found that they had the numbers to succeed in politics. In Boston, New York, and Philadelphia, they took power.

The result: The Irish made less economic progress than any other major group of voluntary immigrants.

That’s the way politics always works. The insiders get the money and the power… the rest get to sing “Tu ra lu ra lu ra” at political rallies.

That’s the story of today’s chart, which tracks the percentage of the U.S. population with a social media profile from 2008 through today. 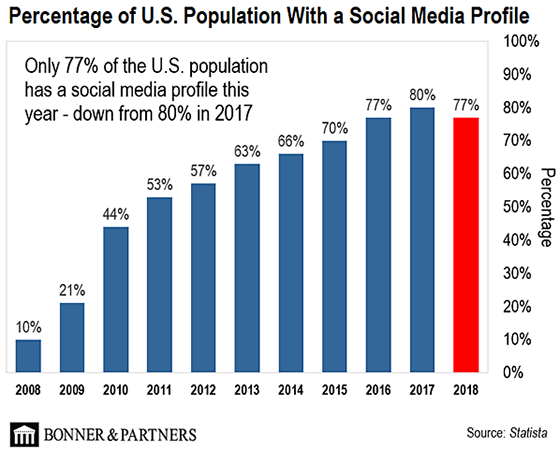 As you can see, the percentage of the population using social media grew every single year from 2008 to 2017. But that trend just ended…

Only 77% of Americans have a social media profile this year… down from 80% in 2017. While still a large swath of the U.S. population, this represents the first year-over-year decline in social media usage over the last 10 years.

Why does this matter to investors?

People logging off social media and calling for data privacy is bad business for companies like Facebook and Google, that make money by collecting and selling user data.

And as Bill’s coauthor on The Bill Bonner Letter, Dan Denning, showed recently, Facebook and Google have an outsized influence on U.S. stocks. Combined, the companies contribute about 5% of the total market cap of the S&P 500.

If the trend of lower social media usage continues, it will have a direct impact on Facebook and Google’s bottom line… and put pressure on the broader stock market.

Buffett’s Least-Known Investment Skill
Warren Buffett is an indisputable legend in the investing world. But of all the skills possessed by the Oracle of Omaha, this one bit of wisdom is least-understood…

The Fed’s $4 Trillion Dilemma
The Federal Reserve is in the midst of a “tightening cycle.” Interest rates are on the rise. But the Fed is also undertaking another policy action. It’s unwinding its balance sheet, which is loaded with trillions in Treasuries and mortgage-backed bonds. And some believe it’s this action that is the real ticking time bomb.

In the mailbag, another sampling of insights from dear readers: Trump, the true purpose of government, and “Satan’s tool…”

I have personally heard and witnessed diabolical hatred for President Trump – it is frightening. This is not the country as I have ever seen it, and much of it is on just a visceral basis. They really don’t have any true reason for hating except that he isn’t a Democrat leftist socialist. I have seen grown men frothing – and I mean frothing at the mouth – saying “I hate him. I hate him. I wish he would swallow poison… and that he suffers…”

This is beyond the pale – I haven’t seen such childish hate in my lifetime. No, President Trump isn’t eloquent, but he is doing a good job on what he pledged to do before being elected. That’s more than one can say for most presidents or politicians.

I voted for Obama twice. I regretted voting for him the second time when I heard his statement (after I had voted), “We are going to fundamentally change America.” The Democrats have been trying to take down this country ever since.

Bill, the purpose of government seems to be to destroy individual freedom, in the name of… what?

You, Bill, seem to travel freely between the U.S., Ireland, France, Argentina, and elsewhere. But for how long? Many nations require that immigrants bring some degree of wealth if they want to settle permanently. I’m surprised Trump hasn’t instituted such a requirement.

More and more restrictions are gradually being imposed on travel. How long before Americans who want to travel internationally must have a visa to leave, and perhaps post a bond to ensure that they return? How long before travel between states is similarly restricted in the name of immigration control? Ridiculous? Don’t bet on it. Government absolutely hates individual freedom.

Since the early 1990s, I have referred to the computer as “Satan’s tool,” earning much derision and many laughs from family and friends. Anyone who thinks my terminology is humorous needs to read today’s Diary. Governments are – and have been – using the computer to chip away at our freedom and privacy, and they’re not about to stop. But people must shoulder much of the blame.

Why are they on Facebook, Twitter, Snapchat, and other “social media” sites in the first place? Ego. Pride. They want to put themselves “out there” for the world to see, uploading every facet of their lives (including what goes on behind bedroom doors, in many cases), as if anyone really gives a damn about them. And, as we know, pride is one of the seven deadly sins. 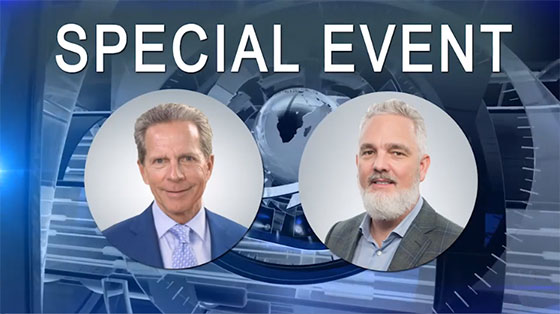