The Nasdaq Composite gained 0.9 percent to close at an all-time high, breaking above 8,000 for the first time, as Facebook, Amazon, Netflix, and Alphabet all rose. The Dow added 259 points as Caterpillar outperformed. The S&P 500 advanced 0.75 percent, also reaching a record high, with materials and financials as the best-performing sectors.

What to make of it?

Is Donald Trump really making America great again? Has the economy just taken off… and is Mr. Market discovering that higher prices are in order?

Or is this just part of the reality show?

“Mr. Trump is turning out to be pretty good,” said one of our guests at last night’s dinner.

“Full employment, higher stocks… He’s got the Koreans talking to each other… And now, he’s even got a new trade deal with Mexico. He’s got a very eccentric manner, but he seems to get thing done.”

As readers keep reminding us, Hillary might have been worse. In her icy grip, the nation would have shivered under orderly, Deep State control.

With The Donald in the White House, on the other hand, the plot may be more or less the same; but the show is much more loose, with more funny routines like “Who’s on first?”… more clowns and scoundrels – like Michael Cohen and Peter Navarro – on stage… unexpected riffs from the band… and more stagehands in scrapes with the law.

And center stage, of course, is the Great Mr. Trump himself.

Take the death of Senator John McCain, for example. Mrs. Clinton would have promptly hung the black crêpe… and, following protocol, would have sung the praises of the nation’s fallen hero, publicly keening for the noble warrior in a gaudy outpouring of fake grief.

McCain was, after all, one of the people Eisenhower warned us about – a man who parlayed an unfortunate career in the Navy into a lifetime as the wingman for the military/industrial/security complex in the Senate.

The Donald could have easily gone along with the formula, too. But the senator had been too good a foil in life. And Trump is too good a showman to let an opportunity pass.

Instead, like Antony putting himself forward over the body of Caesar, Trump came neither to bury nor to praise… but just to use the dead senator as a prop, turning the funeral program into an ersatz reality-show feud, with Mr. Trump, as always, the star.

And by not inviting the president to the funeral, the McCain family played along, giving the press more to say about Mr. Trump.

But let us turn back to money… Has that become just a show, too?

The big jump in the Dow was the show we watched most closely. If the Dow can add a few more points and rise above its all-time high of 26,616 set on January 26, 2018, it will be in undisputed bull market mode.

In bull market mode, a market is seeking its next top. In a bear market, it is looking for the next bottom. If the Dow can’t rise above 26,616, the bear market will be confirmed, and we will presume that the bottom is still ahead.

But perhaps we should ask: What is really going on? Has something happened that makes stocks more valuable? Is Mr. Trump creating a kind of Golden Age for the U.S. economy?

It seems unlikely. Real household incomes are flat (so shoppers don’t have more money to spend). After inflation, most wage earners lost ground in 2017. Industrial production is up less than 5% over the last decade (adjusted for inflation, stocks are up 10 times as much).

The federal budget is further out of balance. And there’s more debt now than there was in 2007, both in nominal terms and as a percentage of GDP.

The only plausible reason for stocks to be this valuable is that the Fed has made the alternative less valuable.

Manipulating interest rates down, the return on the most popular fixed-income investment – the U.S. Treasury’s 10-year note – fell below 1.5% as recently as 2016.

Even after two years of raising rates, a bondholder still earns only 2.8%. But since inflation was recently clocked at 2.9%, the saver dooms himself to losing money by buying the U.S. Treasury note.

But wait… Corporate profits have risen about 30% since 2007. That should account for some of the increase in share values. So how did profits rise when incomes were flat? Where did the money come from?

One company can increase profits by dismissing employees. But if all companies did that, who would buy their products?

Ah… looking closer, we find that more than 100% of the gains came from the same Fed manipulation noted above. Here’s how it worked…

In other words, the bull market in stocks – along with current prices – doesn’t reflect the real value of America’s corporations. It is just part of the spectacle.

And herewith, an additional gratuitous prediction: When the Fed’s tightening policy meets huge corporate and government financing needs, interest rates will rise. Corporate profits will fall. Stocks will crash. A recession will begin.

And then, The Donald will find a new foil… a new target… a new enemy. Then, it will be Fed chair Jerome Powell’s funeral.

And while Google and Facebook take most of the heat for this practice, they’re far from being the only companies doing it.

Today’s chart maps the top industries that sell personal data according to the percentage of the industry involved in the practice. 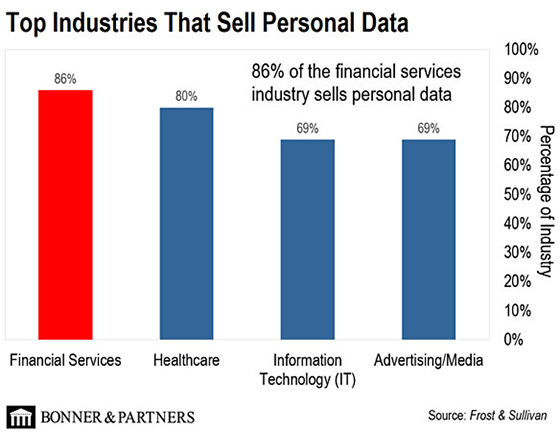 As you can see, 86% of the financial services industry – banks, brokerages, credit card companies, and insurance companies – sells personal data.

And in second place, 80% of the healthcare industry is involved in selling patient data…

That’s followed by IT and the advertising/media industries, in which 69% of companies sell personal data collected from their customers.

P.S. Privacy-minded users have been logging off Facebook and Google after learning of the scope of data gathering. But many could not comfortably get by without dealing with financial services and healthcare companies.

Here’s What Happened to All Those Sears Stores
Three years ago, the once-proud Sears sold off 235 of its department stores. Now, that real estate is finding new life… but not as shopping centers.

Facebook’s Impossible Task
Social media giant Facebook is struggling to moderate the content on its platforms. With more than two billion users, identifying “bad actors” has become a monumental task. It’s a problem which, according to some experts, has no solution…

Why the Government Will Come for Facebook
Is Big Tech too big? Technology firms like Google and Facebook have provided the world with fast, free services like online search and social media. But their success has brought them power… and made them targets for ambitious politicians.

In the mailbag, Trump’s “Stool Pigeons“ are on readers’ minds…

First, the use of “stool pigeons” dates you. The official term is “CI” – confidential or criminal informant, depending on the jurisdiction. And the slang is “snitch” or “punk.” Second, one must remember the federal court system is a device misused to protect the State (or Deep State). The reason there is a 97% conviction rate is due to the use of CIs to lie about defendants in order to avoid going to jail. And prosecutors use this fear regularly to get what they want – the conviction.

Do you have a conscience? Bill, these people are turning themselves in for crimes committed by Donald Trump that they were witness to or complicit with. Crimes unbecoming to anyone, especially a president.

Au contraire, the Russian connection is very close to coming out. Mueller will soon be looking carefully at the National Rifle Association to see how the Russians pumped money through them to support El Trumpo. In addition, when one reviews the incredibly shameful Helsinki episode, one must conclude that Putin has something on Trump – film, debts (probably purchased by Putin from Deutsche Bank), or something from his taxes, which should come out before some of us die.

If he really were being reviewed by the Internal Revenue Service, it’s now been going on for two years. Several states are actively discussing laws that require revealing of tax reports as a necessary qualification for a candidate to appear on the ballot. It seems very likely that there is proof somewhere following Helsinki. It was the only time that El Trumpo has appeared docile.

As bad as Trump is, if he is impeached and convicted, Mr. “I’m repressed, and I want to do the same to you!” Pence will be president. Then we can have our own American Taliban, with Pence and his cronies trying to force their religious right philosophy on us! No thanks! I wonder if they’ll try to pass a law restricting what a woman can wear, requiring chaperones for all dates between unmarried individuals, and outlawing married men from ever meeting one-on-one with any woman other than his wife? LOL

This former financial analyst quit the rat race at 42. But he’s not retired.

When you have a proven method that can make money up to 1,000X faster than usual… every minute the market is open, with a single move… you never “retire.”

Instead, you go all out. He can show you how to do the same… 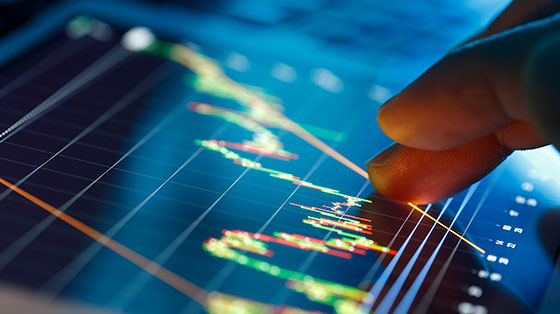