President Trump escalated his trade war with China on Wednesday, ordering his administration to consider more than doubling proposed tariffs on $200 billion worth of Chinese goods to 25 percent from 10 percent, as talks between Washington and Beijing remain at a standstill.

Mr. Trump instructed the United States trade representative to look into increasing tariffs on Chinese imports like fish, petroleum, chemicals, handbags, and other goods to 25 percent, a significant escalation in a dispute that is beginning to take a toll on industries and consumers in both countries. A final decision on the size and scope of the tariffs is not expected before September.

The Deep State welcomes war. But, especially in the case of a trade war with China, it must be a phony war.

And here is a good test. We’ll see how well, or badly, we have connected the dots.

According to the picture we see, the Deep State – the more or less permanent, but fluid and schismatic, group of insiders that controls U.S. public policies – uses war to gain public support for policies that actually serve only one purpose… to shift power, wealth, and status from the public to itself.

That’s why the trade war has to be fake.

Real wars threaten the Deep State’s survival. The wars in the Middle East (now also in Africa), for example, help justify trillions of dollars of wealth transfers to the military/industrial/surveillance complex.

But the U.S. has nothing really at stake in these fights; no matter what happens, it will not be invaded, bombed, or humiliated.

Likewise, the wars at home – against poor people and drug users – go on for decades. And no one is better off – except the Deep State industries engaged in the wars themselves (welfare agencies, prisons, police, drug pushers, etc.).

The Donald’s new trade war is a delight, too; already, the sidewalks are slick with greasy swamp water; lobbyists line up around the block to ask for special favors and dispensations. The insiders gain power and money by controlling crony trade deals.

But neither the president nor his crackpot advisors may realize the danger. And here is where it gets interesting: They mustn’t allow this war to get out of hand.

Where the Elite Get Money

A real trade war with China would be disastrous – for the Deep State itself. That’s why we predict it won’t happen. The 25% tariffs will more than likely never be fully implemented.

Mr. Trump will follow a pattern that is already familiar. He will talk tough. He will stir things up. He will announce victory. And he will quietly back down.

Or else he will not survive as president to the end of his term.

The world now has nearly $250 trillion of debt. Typically, an economy can comfortably carry about 1.5 times as much debt as it has output (GDP).

Global GDP is estimated to be about $90 trillion. That means anything above $135 trillion of world debt is excess, made possible only by the manipulation of the credit system by central banks that have added some $18 trillion to the world’s monetary foundation since 1997.

Total world debt was about $40 trillion back in the late 1990s. Now, it is more than six times as much. World output was only about $27 trillion two decades ago. It has grown, too, but at $90 trillion today, only half as fast.

Main Street is where ordinary people work. They get their incomes and living standards from GDP. As it grows, they grow.

But Wall Street is where the credit flows… and where the elite get their money – from rising asset prices.

Super investor Warren Buffett famously gauges the stock market by comparing Wall Street to Main Street – stock market capitalization to GDP. The stock market value should be about even with annual GDP, he says.

An increase in credit heats up stock prices but leaves Main Street GDP cold. During the dot-com bubble, for example, stocks rose to 145% of GDP – indicating an oversold market ready for a correction.

And now, according to some calculation, the ratio is even more out of whack, with stocks at 149% of GDP.

Bonds and real estate are similarly overpriced. Wall Street and Main Street have never before been so out of balance. The rich have never been richer, compared to the average guy.

Consumer prices did rise in recent years… but not nearly as much as the explosion of the base money supply would imply. Why not?

The answer is in China… where dirt-cheap labor and an export-led economy met America’s fake-money regime.

In effect, the U.S. exported its inflation… It exchanged its major export item – dollars – for cheap Chinese-made goods.

This kept U.S. consumer prices from rising and prevented the working stiffs from noticing that they were getting ripped off.

But that’s not the last dot. We need to look at what happened to the dollars sent to China.

They left the country as consumer spending. But they didn’t stay abroad for long. Chinese merchants deposited them at the Bank of China, which used them to buy U.S. bonds.

They went out from the pockets of Main Street households, in other words, and came back into the pockets of Wall Street investors in the form of higher asset prices.

And there you have the gist of the whole world economic boom of the last 30 years: Big increases in the money supply, with low consumer prices and low interest rates. The China trade was an essential part of the whole fake-money flimflam.

Fake money was created by central banks… and flowed into the pockets of the elite, where it could be converted to real wealth. (Some reports show the top 10% of families making 100% of the wealth gains in the entire 21st century.)

But imagine a real trade war… No more “everyday low prices” at Walmart. Inflation would spike up. And no more low interest rates, either.

China – either by necessity or revenge – would dump its $1.2 trillion worth of U.S. bonds. Bond prices would crash as a massive supply came to the market. Bond yields would soar, forcing stocks down, too.

Commodity prices would collapse. And most of the world would enter a depression – including the U.S.

And which group would lose most? Those with the most to lose, of course – the rich… the well-connected… and the Deep State insiders.

Earlier this week, we passed on economist Martin Feldstein’s estimate that $9 trillion will be lost in the U.S. stock market when prices revert to the mean. But that is just the beginning.

At least that much… and more… would be lost in bonds and real estate, too, in the U.S. alone.

When this picture becomes clear to Mr. Donald J. Trump… our prediction is that he will turn his attention elsewhere.

That’s the story of today’s chart, which tracks the growth of commercial construction spending from 2006 to today. 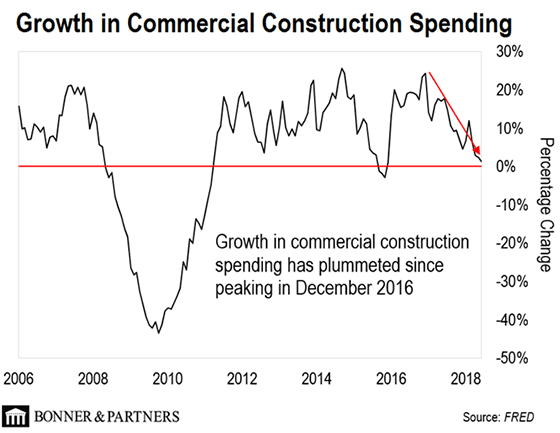 When we say “commercial construction,” we’re referring to new construction of office buildings, warehouses, and retail stores. When construction spending is picking up for these types of buildings, it suggests that the businesses associated with them are growing, too.

As you can see, growth in commercial construction spending has plummeted since peaking in December 2016. It’s down 95% since then.

This doesn’t mean that commercial construction projects have dried up. But it does tell us that businesses are spending less in this area, a sign that growth in the Main Street economy could be slowing down

“The World Is Governed by Market Forces”
That’s how former Fed chair Alan Greenspan described how policy decisions were made in the U.S. in 2007. In other words, politics take a back seat to global market trends when shaping what happens in the U.S. Ten years later, that assumption is being proven wrong at every turn…

Where Amazon Is Vulnerable
New data shows that e-commerce giant Amazon gobbles up nearly half of every U.S. dollar spent online. Amazon is the world’s biggest online retailer… but it might not be the best.

What Ends Civilizations
As Bill has oft reported, the political ideologies of many Americans are shifting further and further left. A majority of millenials – people in their twenties and early thirties – now identifies as socialist. Casey Research analyst Nick Giambruno thinks he knows what’s behind this trend…

In the mailbag, the end of the American republic is on readers’ minds…

This loss of the republic has already happened. We have the lowest kind of people in Congress (both houses), no matter their beginnings or net worth, which keeps growing the longer they are there.

We have a Constitution which was written by people who experienced other kinds of government and saw the fallacy; so they created a republic, not a democracy – not even a democratic republic, which is an oxymoron. Bill, you know no one in government even knows what the Constitution says; therefore, they pay no attention to what is in it. They are a mob out for themselves. Therein lies their destruction.

You have been, and remain, spot-on! I would add that the U.S. demise has been going on since World War II ended. Since the demise of vacuum tubes, attic fans, slide rules, black and white movies, accountability, and “reading, writing, and arithmetic” (to identify just a few), what once was just a toilet bowl overflow now resembles a tsunami! Please keep your candid and truthful observations coming. Thank you.

I liked Billy T.’s letter and share many of his sentiments. But as to the picture of the barn framing, it did worry this architectural engineer. The collar ties are so high as to not be of much use, and the connections thereto also would be a concern. But perhaps there is no real snow load in that part of Ireland, unlike here in Woodstock, New York. I wish you well and will continue to enjoy your writing, both on- and off-topic.

It’s not complicated. It doesn’t take a lot of time. You can do it yourself in a few minutes per week. 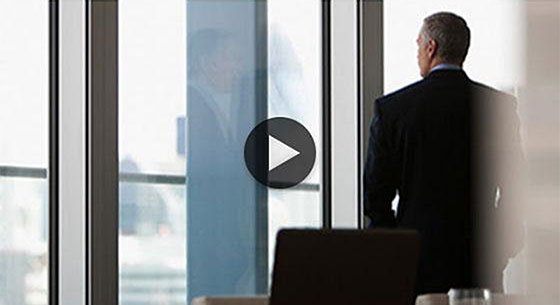