Before we get to today’s stories, a quick public service announcement.

For readers who don’t know, Teeka is a great source for profitable investment ideas. Like me, he is heavily involved in blockchain and cryptocurrency opportunities. And he’s always done right by his readers by emphasizing proper risk management and position sizing.

On Wednesday, Teeka is revealing a new trading system that he believes could be one of the biggest breakthroughs of his career. He’s so confident, in fact, that he took money out of his cryptocurrency investments so that he could follow this technique.

I’ll let Teeka give you all the details himself. But you have nothing to lose by hearing him out. Go here to reserve your spot for free.

Now on to The Bleeding Edge… 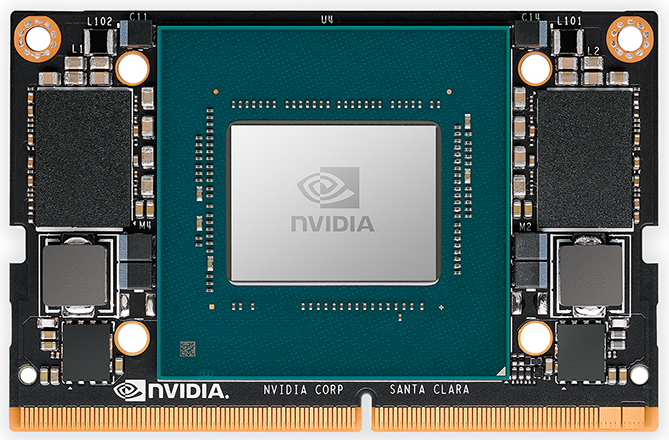 What’s interesting is this product is perfectly designed to run powerful AI at the edge of networks. Here’s what that means…

Typically, data is transmitted back to a massive data center full of graphics processors, often from companies like NVIDIA and AMD. There, thousands of servers with processors are designed to run AI software and can process all of the data. Once complete, the results are sent back to the “edge” of the network.

Why? Because small, low-power, inexpensive computing systems like the Jetson Xavier NX are hitting the market. AI can now function at the edge and perform tasks right there on the spot. No need for the massive data center.

The Jetson Xavier NX is like a tiny supercomputer that can run neural networks, a powerful form of AI that can infer or “think” and deliver an answer or course of action on the spot. This is the near future.

For example, you could put this module in an autonomous drone or robot to improve its performance. You could put it in security cameras or medical devices to empower them to make decisions on the fly. Security cameras could be trained to contact the security company at the first sign of something suspicious. And medical devices like health monitors could contact emergency care when they detect a serious health problem.

So the Jetson Xavier NX can bring superior AI to virtually any device.

And it’s powerful enough to make 21 trillion operations per second. Yet it consumes very little power… It can run on under 15 Watts. That’s one-fourth the power required to run a 60-watt light bulb. It is efficient enough to operate in devices that are battery-powered.

Better yet, the Jetson Xavier NX is priced at only $399. That’s cheap enough for anyone interested in running AI… anyone from enterprises to hobbyists to entrepreneurs. Affordable, powerful technology like NVIDIA’s Jetson Xavier NX will accelerate innovation and technological advancement.

So this will be a fun product to watch. And its further proof that NVIDIA is one of the best AI companies in the world today. Plus, this is a harbinger of a bigger theme at work…

Over the last two years, billions of dollars have been invested in early stage companies focused on application-specific semiconductors designed specifically to run artificial intelligence/machine learning (AI/ML). Many of these companies will be bringing their products to market in 2020.

This has me very excited. If we think about computer vision, facial recognition, delivery drones, autonomous robots, or next-gen medical devices… all these things will be empowered by the AI hardware products coming out in 2020.

And to me, that spells out a massive investment opportunity. I’m keeping a close eye on my favorite private semiconductor companies and watching for acquisitions or filings for initial public offerings (IPOs).

This new AI photo editing product will be a hit…

Adobe just announced a new product called Photoshop Camera. This may sound like a boring product on the surface… But it’s going to be a big hit.

Photoshop Camera is an AI photo editing application for smartphones. The app analyzes your pictures and makes suggestions to edit them with special visual effects. It does this with “lenses.”

These are similar to the lenses on Snapchat (a popular social media app on smartphones). Some of the lenses simply enhance the lighting or contrast of the picture. Others erase any blemishes. And some are very artistic.

The app can make interesting modifications so your photos look surreal. Here are some examples…

Now, this may seem like an odd product coming from a company like Adobe. But Adobe is in the perfect position to produce this. It has hundreds of millions of stock photos. That’s a massive dataset. And Adobe used that dataset to train its AI. The AI has become an expert in offering suitable lenses for each picture and making the modifications to the picture in a split second.

What I like about this is how simple it is. Consumers don’t have to do any work. They can just choose one of the app’s suggestions.

And if we think about social media culture… users want to portray the best or most interesting version of themselves for others to see.

Well, this product will add a new element to that. Photoshop Camera will enhance a user’s ability to put out interesting content with very little work. It simplifies the process of augmenting an image and makes those that use it feel creative. This application is going to do very well.

Why this early stage company is growing pig kidneys…

There are more than 100,000 people in the U.S. waiting on an organ transplant right now. And 20 of those people die every single day because they didn’t receive an organ in time. There just aren’t enough organs available for the people who need them.

Well, early stage company eGenesis is going to solve this problem. Famed Harvard geneticist and entrepreneur George Church founded this company. Its purpose is to tackle xenotransplantation. How’s that for a fancy word?

I know that sounds weird. But in the medical world, we have been using animal parts to repair human organs for years now.

For example, pig heart valves and cow cardiac tissue have been used for decades to repair human heart valves. But we just haven’t been able to transplant full animal organs. The human body rejects them.

That’s where eGenesis comes in. It is using CRISPR genetic editing technology to modify the DNA of animal organs so the human body will accept them. And the first target is to “grow” kidneys in pigs specifically for xenotransplantation.

CRISPR helps avoid rejection of the “foreign” material and genetically deactivates the porcine (pig) retrovirus, making the organs safe to use. With CRISPR, we will have a successful xenotransplantation, and that’s exactly what eGenesis is going to do.

eGenesis just raised $100 million in a Series B venture capital round last week. Whenever we see a biotechnology company raising that much money on a Series B, it’s a good bet that it won’t be too long before IPO talk starts happening.

So this is a fun company to watch. In fact, anything that George Church gets his hand into is always interesting.

The next step for eGenesis will be to prove that genetically modified pig kidneys are safe and effective in humans. When that happens, I expect we’ll see the company file to go public.

As such, we’ll add this company to our watchlist. Stay tuned…