Some interesting research from the University of Oxford Centre for Evidence-Based Medicine caught my eye over the weekend.

The research analyzed COVID-19 mortalities as a percentage of hospitalized patients. Here is what the data looks like. 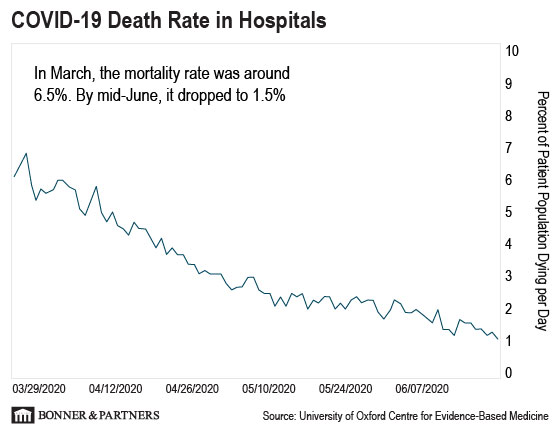 Back in late March, the mortality rate of hospitalized COVID-19 patients was around 6.5%. By mid-June, the rate had dropped to 1.5%.

To be clear, this number is not the case fatality rate, or the percentage of people known to have COVID-19 (including asymptomatic cases) who have died.

We don’t yet have a clear view on how many people have already had COVID-19 in the U.K. But it’s very likely the case fatality rate is lower than 1%. More serological testing will be required to determine exactly how low.

A few things could be impacting this dramatic drop in numbers.

This is a very positive development in the U.K. The research indicated that similar trends are being seen elsewhere. That is certainly true of the U.S.

Over the weekend, the daily deaths continued to drop to 285 despite the continued spike in new COVID-19 cases. For comparison, roughly 1,660 people die each day from various forms of cancer in the U.S. alone.

As I mentioned last week, we’re going to keep a close eye on this daily death chart. It will tell us whether things are getting better… or worse. As for now, the trend continues down in the right direction.

Now let’s go to our insights…

Back in March, Honeywell announced that it had the world’s most powerful quantum computer.

For newer readers, Honeywell is a large conglomerate that provides technology and services to the industrial, aerospace, energy, and commercial building sectors. Honeywell wasn’t a company I expected to enter the fray of quantum computing.

Honeywell is a slow-moving incumbent. It hasn’t been in the computing business since the mainframe era. But it suddenly claims to be at the bleeding edge of quantum computing?

Honeywell was very light on details when it announced its quantum computer in March. But we just got a little more information on Honeywell’s quantum computer, though not as much as I would have liked.

Honeywell is calling its computer H0, and it has a quantum volume score of 64.

But wait – what the heck is quantum volume?

But Honeywell did not say how many qubits its quantum computer had. Instead, it focused on quantum volume.

So Honeywell isn’t using the industry-standard qubit measurement used by Google, Rigetti, and D-Wave. The company is using IBM’s metric to claim superiority.

It reminds me of when Intel recently said semiconductors should not be measured by transistor density but rather by how much value they provide to society.

Anytime I hear something like that, it always comes from incumbents that don’t have the best tech in the industry. They are trying to make their trailing technology look better than it really is.

That said, I am still interested in what Honeywell is doing. The company is taking a trapped-ion approach, which is one of the promising approaches to quantum computing.

What I like about this approach is that it has the highest fidelity of all the different approaches to quantum computing. In other words, it is the most error-free.

However, the superconducting approach to quantum computers is about 500 times faster than a trapped-ion approach. That’s a major weakness of using trapped ions.

To achieve the raw computational power of quantum computing, I suspect that the superconducting approach will win out.

But there will certainly be applications where having a lower error rate is more important than pure power and speed. That’s where trapped-ion quantum computers will likely shine in the near future.

So we will keep our eye on Honeywell. None of its quantum work has been peer-reviewed yet, and there is still very little detail available about the H0.

We may recognize the name Andrew Yang. He was one of 36 potential candidates who threw their name in the hat to become the Democratic Party’s presidential nominee for 2020. Yang lost that contest. But he just launched an interesting new project…

It’s called the Data Dividend Project. The project’s goal is to place the ownership of consumer data in the hands of the consumers who produced the data, not in the hands of technology companies like Google and Facebook.

This is an issue we have talked about in these pages many times before. Companies like Google and Facebook are tracking everything we do on the internet.

They are creating large files of every website we go to, every email we send, every search we conduct, every product we look at, and much more. They sell this data to the highest bidder, generating huge advertising revenues at our expense.

Yang’s plan is for consumers to have control over their data and have the option to opt-in to data sharing in exchange for payment. He believes that technology companies should compensate consumers when they monetize a consumer’s data. And for consumers who want to opt-out, that will be their right.

Yang’s view is similar to my own, and his intentions are good.

Where we differ is the execution. Yang wants to have this put into law. My strong preference is to handle this in the private sector. I believe this is a massive business opportunity for private industry.

Companies that set up platforms with an opt-in system stand to do quite well. In other words, I believe that the private industry can solve the majority of this problem by coming up with products that essentially achieve the same thing.

Brave is paving the way for this model right now with its new browser that pays users to view ads. And Brave is on a roll. The browser just surpassed 15 million monthly active users, and its ads boast a clickthrough rate that is 4.5 times the industry average. That level of engagement is transformational for the advertising industry.

Now, imagine a social media company that offers to pay users 70% of the ad revenue generated from the data they produce on the platform. Once consumers realize they can make $100 or more every month by opting into these systems, I think the right platforms would catch on like wildfire.

And that would start the process of disrupting Google and Facebook – something many of us would love to see happen.

So I don’t think we need more government involvement, paid for by taxpayers. But I am happy to see Yang raising the profile of this issue. The more consumers get excited about ad revenue sharing systems, the more companies will rise to make it happen.

Speaking of data and privacy, I am incredibly excited about what came out of Apple’s annual Worldwide Developers Conference (WWDC) last week.

Apple is starting to double-down on privacy, and it is even calling privacy a “right.” This is a great way to differentiate itself from Google and its Android operating system (OS).

As regular readers know, Apple does not mine our phones or track our digital activity to generate ad revenues. That’s one reason I have been a staunch advocate of Apple’s iPhone over Google’s Android phones.

And Apple just announced a new privacy feature for the iPhone’s iOS 14. Whenever an app is recording audio or video, a little light will show up in the corner of the phone. That will let users know that they are being recorded. 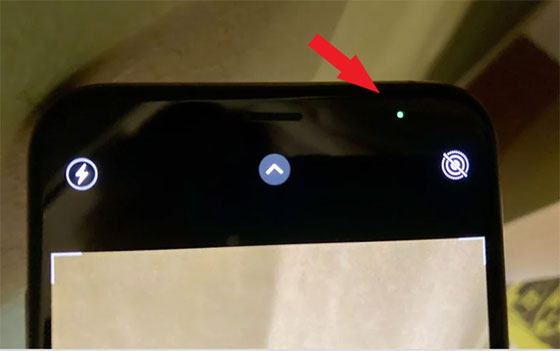 This is a great feature.

Many of the apps we download come with user agreements that are hundreds of pages long. Buried somewhere in those pages is a clause that says the app has the right to use our camera and our microphone.

We agree with this when we download the app. And that means many of our apps could possibly be recording us without our knowledge.

Why would they do this?

To generate useful data that they can sell to advertisers, of course. Have you ever been served an ad for a product that you recently mentioned out loud near your smartphone?

Apple’s new iOS update will warn us if this behavior is taking place.

And Apple is implementing a new policy for the App Store that will enhance privacy even more. Now any app that tracks users will have to ask for permission to do so first. That way users can decide if downloading the app is worth sacrificing their privacy.

This is important because many of our apps are tracking us day and night. Waze is a great example.

Waze is a popular navigation app now owned by Google. It tracks our physical location and our web activity – even when we aren’t using the app. It sends all the data it collects back to Google, which in turn sells it to the highest bidder.

Apple’s new policy will make sure that consumers know about and consent to this type of activity.

Lastly, Apple is making apps declare what data they are collecting from users. That way iPhone users will know exactly what their apps are doing in the background.

These are great developments by Apple, and I think this is just the beginning. Apple has been gradually improving its privacy features with every new software update.

Eventually, consumers are going to get smart and demand products and apps that don’t violate their privacy. We will see Apple’s iPhone surge in market share when that day comes. And we will see more and more apps that respect privacy hit the market as well.

This is a very smart strategy by Apple, especially given all of the privacy-related discussions that have been happening both in the U.S. and Europe.