We wouldn’t even know it reading the mainstream media. But late Friday, the U.S. and China came to an agreement on the phase 1 trade deal, and over the weekend, both sides confirmed the deal. It will be signed in the first week of 2020.

It didn’t even make the top 10 news stories on Bloomberg… hard to believe.

Both sides agreed to halt a new round of tariffs, and China agreed to increase imports from the U.S. and other countries. The U.S. and China will also reduce some of the existing tariffs in place.

Aside from the lack of media coverage, this is great progress. It is good for the equity markets and especially good for technology investors. Politics aside, as investors, we can celebrate the progress being made on these trade negotiations.

Any positive steps toward fair, balanced, and “normal” trade relations are very welcome.

6G is already in the works…

Today, we’re going to talk about 6G wireless technology. I almost hesitate to do so for fear of confusing readers. After all, it sounds crazy to be talking about 6G with 5G just rolling out…

Industry experts met at the first major 6G gathering in Finland back in March. That led to the recent launch of the 6Genesis Flagship Program (6GFP). It’s an eight-year, $230 million project to develop, implement, and test the key technologies needed for 6G.

The answer is that wireless technologies are about a decade in the making. It’s a complex development process that requires an incredible amount of collaboration in the industry. To develop a next-generation wireless standard typically requires more than 100 companies working together and contributing their intellectual property.

Believe it or not, we started working on 5G way back in 2010… just as 4G was being rolled out. So the new focus on 6G this early is normal. The same is true for each wireless generation.

That’s just what’s needed to get the deep network penetration necessary to deliver higher speeds and larger bandwidth. We can expect 6G speeds to be about 10 times faster than 5G. That puts us around 10 gigabits per second. That might seem unnecessarily fast. For how we use today’s wireless networks, it is. But with more bandwidth and higher speeds come applications that utilize the newfound network capabilities.

And we can expect artificial intelligence (AI) to be deeply sown into 6G networks. AI will help manage what will be incredibly complex wireless networks. And it will enable incredible services even above what 5G will bring.

Of course, you won’t hear me talk about 6G much in the next few years. That’s because there are no 6G investment opportunities yet. It’s still a decade out.

So we are laser-focused on 5G right now. The 5G boom is just hitting the sweet spot as we move into 2020. I’m on record saying that 5G will be one of the most profitable investment trends of the next decade. But I suspect 99% of investors aren’t prepared for it.

That’s why I’ve been positioning my readers with recommendations that will play a critical role in the 5G rollout. One 5G company is at the top of my list for 2020. For the details, go here.

The truth about satellite internet…

Broadband analysis company Ookla just put out an interesting graphic. It shows the geographic areas of the United States that rely on satellite internet. That’s because there are no high-speed broadband services providers to connect to… The locations are too remote.

Ookla is a service that measures global internet metrics. It does this with an app that people download to conduct speed tests on their connected devices. Consumers around the world have now used Ookla’s speed test app 26.5 billion times. That gives it a comprehensive data set.

The image below highlights those areas of the United States where people are dependent on satellite internet.

Satellite Internet Use in the United States 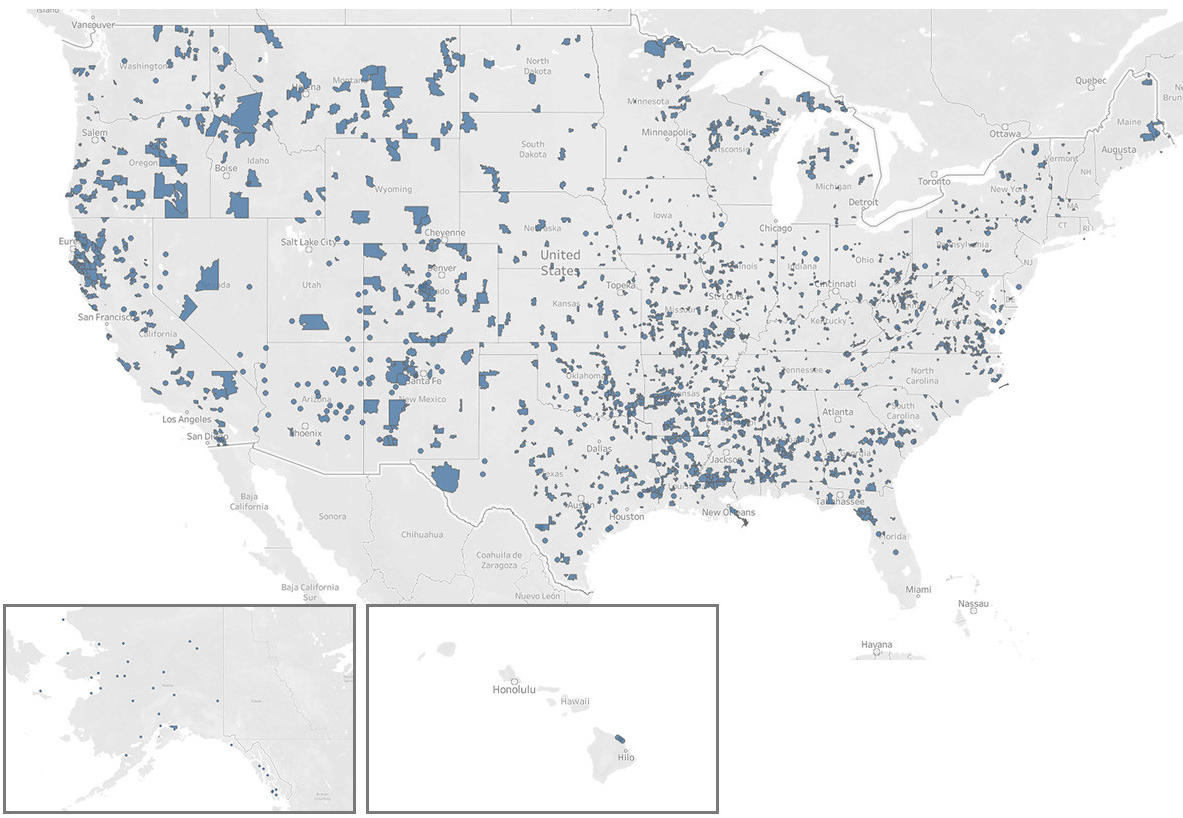 We sometimes get questions about why more people don’t use satellite internet. And readers want to know if ambitious satellite internet programs – like SpaceX’s Starlink project – could be a replacement for 5G. The answer is absolutely not…

Satellite internet is only used by a small percentage of the population because it is slow and bandwidth is limited. In other words, these consumers have no other choice. It is the best that they can access.

My initial research shows that you can buy 10 gigabytes (GBs) of monthly data with download speeds up to 25 megabits per second (Mbps) for $60 per month through a top satellite internet company. Then, once you hit the 10 GB data limit, your speed is dropped to 1–3 megabits per second. At that rate, you’d be waiting on websites to load.

And by the way, that 10 GB limit is tiny. Just stream a few hours on Netflix, and you’ll hit your limit. It is easy to use up the 10 GB in a couple of days.

For comparison, I’m able to achieve up to 300 Mbps with my broadband internet service – with no monthly data limits. And with 5G, we’ll be able to achieve speeds averaging 1 gigabit per second.

That means that 5G will be much faster than peak speeds from satellite internet. Satellite internet just can’t compete with this performance, and in fact, it wasn’t meant to. The economics just don’t make sense.

So, no, satellite internet – even exciting projects like Starlink – isn’t going to challenge 5G or broadband internet service providers.

I’m not sure many people know this, but whenever we use Google, Facebook, and other data surveillance companies, they download cookies on our computer without our consent.

These cookies follow us around the internet all day, every day. They document where we go, what we watch, and what we buy. The software cookies send back that information to headquarters. Then they build a profile of us to sell to advertisers. And they keep that profile forever. There’s no way to delete it.

Well, a few years ago, Apple took a stand against this type of activity. Apple implemented what it calls Intelligent Tracking Prevention (ITP). ITP prevents third parties from following you around the internet. This is something that’s automatically installed on Apple computers, is set as a default, and is used by Apple’s Safari web browser.

And it turns out that ITP has had an incredible impact on the advertising industry. We just learned that the cost to advertise to Safari users has fallen 60% since ITP. That’s because advertisers won’t pay a premium if they don’t receive the detailed user data they need to target their ads.

So advertisers are struggling on Safari. They love Google Chrome, however. The cost to advertise on Google Chrome has consistently risen because Google is expropriating so much data from users. Advertisers are willing to pay more for that data. That’s Google’s business model.

The takeaway here is that Apple’s products may be a headache for advertisers. But for users who care about their digital privacy, they are a much better alternative to Google. And though Apple doesn’t have its own search engine, we can always use DuckDuckGo or Brave instead of Google’s search. That’s the best way to keep Google’s activities at bay.

By the way, this is a topic I discussed with Glenn Beck when I was a guest on his podcast last month. We talked at length about what data miners like Google and Facebook do with our data and how users can protect themselves from this behavior. If you missed the interview, go right here.