Before we get to today’s insights, something important caught my attention…

Samsung is the world’s largest manufacturer of memory semiconductors as well as smartphones. Believe it or not, Apple’s global market share is relatively small, only around 12–13%.

Because of this, Samsung Electronics is often seen as a bellwether for the prospects of the smartphone and semiconductor industries.

As we know well, the prolonged trade negotiations have held back the semiconductor and communications sectors of high tech. But the unexpected results from Samsung Electronics are a positive sign that demand for semiconductors is stronger than most thought.

I’ll keep tracking developments in the broader technology market. But for now, on to The Bleeding Edge…

We have talked recently about how both Facebook and Huawei want to get into our homes. These companies each launched a television-related product, complete with cameras and speakers, to keep tabs on us in our living rooms.

And now it is Google’s turn…

Over the weekend, I was reviewing one of Google’s patents describing its smart home system. And it is far more comprehensive than what Facebook and Huawei envisioned.

Google wants to connect everything to its system. Electrical outlets, smart thermostats, the internet connection, televisions, musical devices, the HVAC system, security cameras, motion detectors, the pool heater, and even the irrigation system… Google wants it all. 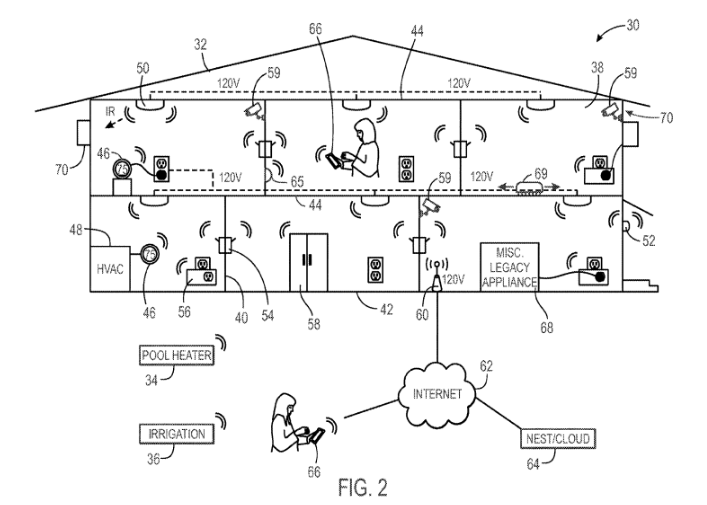 Looking at this image… We are talking about a full-fledged home invasion.

Of course, Google will sell consumers on convenience. It will say, Imagine being able to control everything from your front porch light to your lawn sprinklers right from your smartphone!

But make no mistake, Google just wants our data.

As we talked about before, it is a terrible idea to let companies like Facebook, Huawei, and Google into our homes. Their business model is to surveil consumers and steal their data without them knowing… only to package it and sell it to advertisers.

And with its smart home system, Google would record, surveil, and sell every aspect of our private lives. It’s horrific. I can only recommend that consumers do not let this happen.

For those of us who want smart home products, look at companies like Apple and Amazon. They are far better custodians of our data because their businesses are not based on selling it.

Instead, these companies depend on our repeat business. They deliver quality products in hopes that we will come back for more.

The latest trend in artificial intelligence…

Remember, an AI typically “learns” by studying these large data sets to improve its performance.

Training an AI on this data set required enough electricity to power the average U.S. household for 50 days. And that’s just the computer power needed. It is expensive and time consuming. These factors have limited this kind of AI development to big companies with deep pockets.

Now, a year later, Google has flipped the model. Researchers just produced a data set that is 60 times smaller than Bert’s. And in training, the results were about as good.

Yet this new model requires dramatically less processor power and less time. It is faster and cheaper to run. This new approach is causing a big shift in AI right now.

Up to this point, AI development was centered around powerful semiconductors built for AI, massive data centers to run the AI, and big data sets. But the next 12 months will be different. The industry is shifting… and the focus will be on developing AI that can run and learn on smaller data sets.

Why is this important?

It means the industry is opening up to smaller companies. It no longer takes big money and a lot of time to develop AI and the data sets needed for training. In fact, the race is on to see who can make these data sets even smaller and more efficient.

This is the nature of exponential growth. One day, something seems far off on the horizon. The next day, it’s on our doorstep.

We’ll see rapid innovation, tons of industry-specific AI-enabled developments, and a lot of incredible artificial intelligence over the next 12 months. This will be a major trend that I’ll be tracking in 2020.

Researchers at Western University just designed a CRISPR therapy that can optimize the human microbiome. These are the little organisms in our gut. Here’s how it works…

A delivery system targets specific bacteria known to be harmful. When it finds them, it delivers the CRISPR therapy, which edits the bacteria’s DNA so that the bacteria die quickly.

In other words, CRISPR can be used to kill the bad bacteria, allowing the good bacteria to flourish.

This is important because the bacteria that make up our microbiomes perform all kinds of tasks to promote health. They help digest our food. They help develop and maintain our immune systems. They regulate our metabolisms. And they assist in many other ways we are just starting to learn about.

And we are also learning that the microbiome is linked to many illnesses – cancer… AIDS… multiple sclerosis… cardiovascular disease… Parkinson’s disease… inflammatory bowel disease… and even autism.

So this is a natural place for CRISPR to operate. After all, CRISPR’s origins are from bacteria.

But here’s the most exciting application of this new development…

Scientists can use this breakthrough to develop CRISPR therapies targeting “superbugs” that have no known antibiotic.

This has been a big concern in the medical field. We have seen a number of superbug outbreaks, often in hospitals. The bacteria are resistant to our best antibiotics. Readers may remember the MRSA outbreaks that were going on not too long ago.

The Center for Disease Control and Prevention estimates that 23,000 Americans die from superbugs every year.

Well, the great thing about this CRISPR method is that it doesn’t try to fight the bacteria… It simply edits the DNA so that the bacteria die “naturally.” So this may be the best way to combat these superbugs.

And to me, this is a multibillion-dollar opportunity just waiting to be built. I am very curious to see which early stage tech companies pick this up and run with it.

And when I find a company, my readers will be the first to know.

P.S. Investing in the best CRISPR genetic editing companies is a once-in-a-generation opportunity. That’s because this technology will be the most meaningful medical breakthrough since antibiotics. And I’ve identified one company that I believe is set to soar after it releases trial results later this year.

To learn more and get all the details on how I spot companies like this, you can review a recent investing presentation I put together. Go right here.