Before we get to our insights, something interesting caught my eye…

To the surprise of many, the United States is the world’s leading producer of oil. That’s not a typo. The U.S. is now producing 12.5 million barrels a day.

And get this, the U.S. production will account for 85% of the increase of global oil production through 2030. By then, OPEC members and Russia will only amount to 47% of global production. Incredible.

And how did all of this happen? Technology.

Specifically, hydraulic fracturing technology that injects a liquid into a wellbore. This high-pressure injection creates cracks in deep rock formations that allow natural gas and oil to flow more freely.

My mission with The Bleeding Edge is to keep investors up on the latest trends and investing opportunities in the world of high technology. I want to demonstrate how technology can be an unstoppable force for good and wealth creation.

This technology has certainly made a material contribution to the economic growth the U.S. is experiencing today. This is good for the equity markets and fueling even more technological innovation. Who says we can’t talk about oil in The Bleeding Edge?

A big announcement from the Centers for Medicare and Medicaid Services (CMS) just got my attention. The CMS is proposing to expand its coverage of next-generation sequencing (NGS) for patients who have a higher risk of ovarian or breast cancer.

This means that Medicare and Medicaid will pay for genetic tests for at-risk patients to determine whether they have ovarian or breast cancer.

As a reminder, genetic sequencing technology maps the entire genome of a patient. Think of it like a “blueprint” of our genetic makeup.

This is big news. The CMS, perhaps unsurprisingly, has been slow to provide coverage for this type of screening. But that’s changing.

And that tells me that precision medicine is hitting an inflection point right now. Patients with Medicare and Medicaid will soon have coverage for a wide range of genetic screenings. 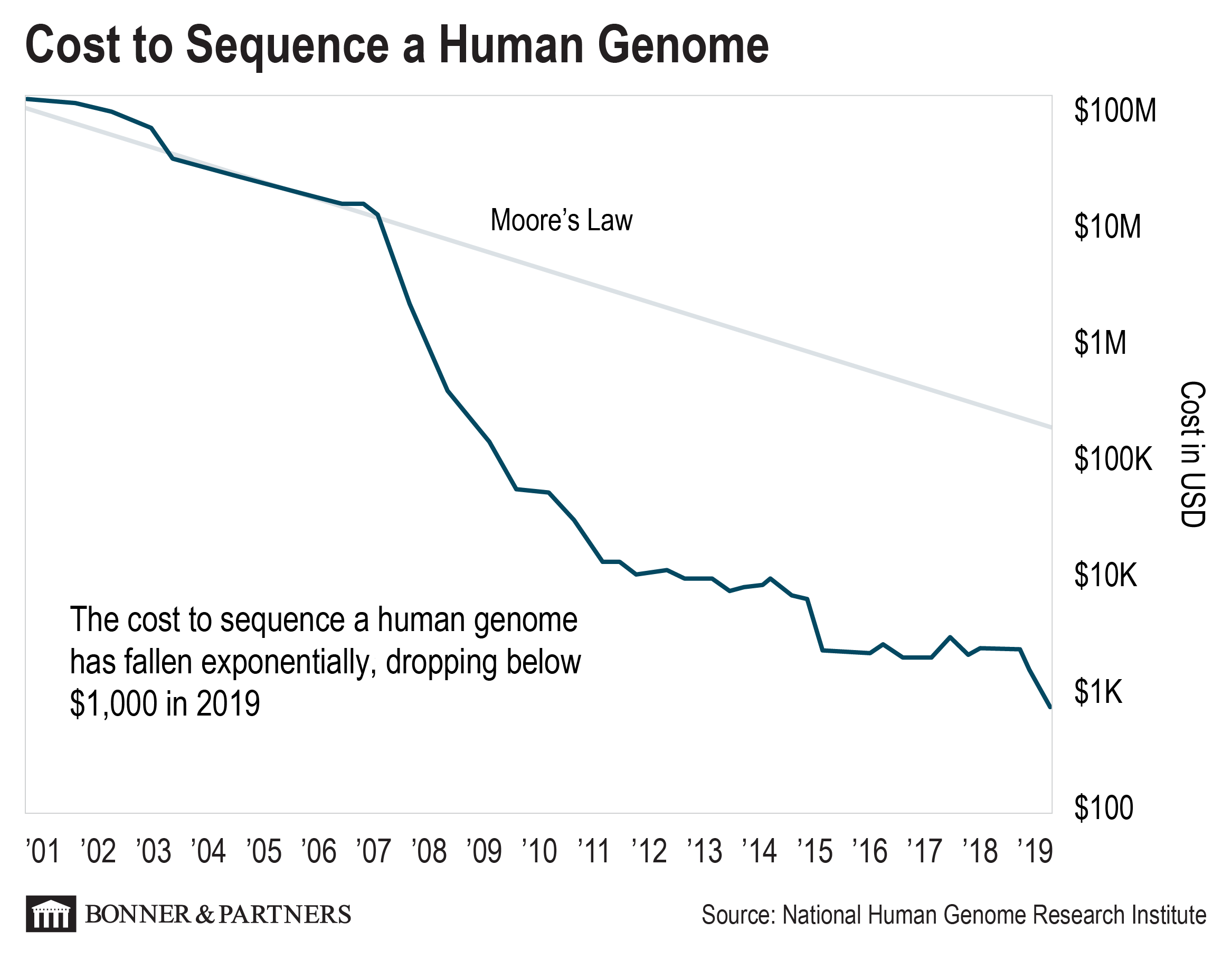 That’s an amazing drop in price. And that’s why the CMS is starting to come around.

And it’s not just Medicare and Medicaid. Private insurers are also opting to cover genetic sequencing. As of November 1, 2017, UnitedHealthcare began covering “whole exome sequencing for patients where clinical presentation is non-specific and does not fit a well-defined syndrome.”

Looking ahead, there will be an explosion in genetic screenings next year and in the years to come. It will become normal for physicians to order genetic screens first… not last.

Spending years seeing different specialists and trying to discover the problem will be a thing of the past.

One simple genetic test – just a vial of saliva – will be enough to determine the underlying cause of many health problems right away. That will save insurance companies money. And it will save patients time, money, frustration, and pain.

And once we identify a genetic disease, we now have the technology to correct it.

As regular readers know, this is thanks to CRISPR genetic editing technology. CRISPR is like software programming for DNA. It allows us to “fix” the genetic mutations that cause many diseases.

I have been pounding the table on CRISPR since 2015. I’m on record as saying that this technology will cure all human disease of genetic origin. Readers of my Exponential Tech Investor service are already up 290% on one of our CRISPR recommendations.

I can’t wait to watch this trend play out. Precision medicine will be one of the most prominent trends of 2020.

CRISPR will save the world…

The World Health Organization (WHO) released a report about drug-resistant bacteria – “superbugs” – that caught my eye.

I know that may sound odd for a tech letter… Why would a technologist be interested in what the WHO is saying?

Well, the report said that 700,000 people die each year due to drug-resistant bacteria. That’s the bacteria that antibiotics can’t treat.

That’s a terrifying proposition. But guess what? CRISPR is going to save the world from superbugs.

New research out of the Schulich School of Medicine in London, Ontario, demonstrates a method for using CRISPR to kill superbugs. The science behind this is incredibly complex. But the concept is simple.

The CRISPR enzymes are programmed to hunt down drug-resistant bacteria in the body. When it finds them, the CRISPR therapy slices the bacteria’s DNA over and over again until it dies. It’s as easy as that.

So this is another fantastic application for CRISPR technology.

Amazing stories like this remind me why I’m a technologist. Technology solves the world’s problems. Always has. And always will.

Yes, bad people can misuse technology for bad things. But the advancement and improvement in our quality of life far outweigh the risk of some bad apples. And we will get better at using technology to keep those bad actors from causing trouble.

The tech boom is coming to the heartland…

The great state of Indiana just came out with legislation that offers to eliminate sales tax for an incredible 50 years for any company that invests at least $750 million into building a data center in the state.

Let’s think about this a minute… Who can afford a $750 million investment?

I can think of five companies: Apple, Amazon, Facebook, Google, and Microsoft.

Given Indiana’s specificity in the bill, it’s clear it is targeting these five companies. And for good reason…

More than $119 billion was invested in data centers worldwide last year. And these five companies made up the bulk of that spending.

So Indiana knows where the money is. And the state estimates tax savings of $70 million for the corporation that takes it up on its offer.

Of course, this bill is controversial in the state. Some argue that Indiana desperately needs more tax revenue to fund itself. They say that giving up revenue from the 7% sales tax would be a mistake.

What those people are overlooking is that 7% of zero is still zero. Nobody is going to build a massive data center in Indiana without a big incentive.

Plus, there would be a major economic boom while the data center was being built. General contractors and local companies doing construction work would benefit.

And afterward, such a large data center could stimulate additional tech business to flow into the state. There’s a growing appetite for this.

That’s because it has almost become too expensive to build early stage tech companies in Silicon Valley and New York City today thanks to high taxes and real estate costs. It’s just not cost effective.

There are major cost savings to be had for tech companies moving to the heartland. But it will take a big catalyst to get this trend going…

I’m not at all surprised to see incentives like this from parts of the country that have not enjoyed much technology-driven economic growth. I expect we’ll see even more of these kinds of state-level policies over the next few years as the economic boom continues.