I took some time to relax this weekend with family and friends at the Cape Cod National Seashore. It is one of the most beautiful parts of the country. It’s always great to swim in the ocean on a beautiful summer day… and fortunately, I did not come face to face with any great white sharks.

Yet even in such a great place, it’s hard not to talk about the world of technology and the latest news about trade negotiations. As we noted last week, representatives from the U.S. and China met in Shanghai to continue discussions. Apparently, they didn’t last very long…

Meetings took place for a mere three hours with no progress reported.

President Trump may actually be right… The China team may actually be waiting for a possible Democratic successor in 18 months’ time. The U.S. will be applying a 10% tariff on an additional $300 billion in imports from China, effective September 1 if progress isn’t made.

The Financial Times published an interesting article about how China is “racing to keep foreign enterprises in-country.” Reportedly, more than 50 global companies have announced or are considering plans to move production out of China. These are big names as well… Apple, Panasonic, HP, Dell, Sharp, Nintendo, and GoPro, just to name a few.

It is fascinating to watch these negotiations play out. And, of course, I track developments closely, as there is a direct impact on technology companies.

We can see the impact on China’s economy in the numbers. Exports to the U.S. in the first five months of the year were down 12%. That number is going to get larger.

There are only so much currency devaluation and decreasing margins (or losses, for that matter) that China can take. Eventually, there will be a breaking point. I am hoping for a resolution soon… for the benefit of both countries and – for that matter – for the rest of the world.

In each of these cities, Verizon has a specific coverage area to start with. It is focused on the most population-dense areas first.

In Washington, for example, 5G will cover the area around the White House, the Senate buildings, Ronald Reagan National Airport, the National Mall, and the Smithsonian.

So if you are the president or a U.S. senator, you now have access to blazing-fast 5G. What a great way to demonstrate to policy makers that the tech is real, the networks are being rolled out, and 5G really is 100 times faster than 4G.

This technology will enable services that simply weren’t possible over 4G… which means new products and services, economic growth, and (when viewed at a national level) a competitive economic advantage.

Some of us might be thinking that the early launch of the 5G network coverage in D.C. for the White House and the Hart Senate Building isn’t a coincidence. We’d be absolutely right.

If we remember, the current administration “threatened” to build out a national 5G network that would be run by the government if the wireless carriers didn’t get on with it and get it done.

After all, having the fastest possible communications network on the planet is absolutely critical for economic growth and strength… and some might even say for national security.

Verizon was smart to launch in D.C.… What better way to demonstrate progress than to put 5G technology in the hands of busy policy makers? Who better to appreciate the power of 5G?

Verizon is on track to have 5G live in 30 U.S. cities by the end of this year. Even more exciting, it’s been confirmed that Verizon’s network is capable of getting download speeds up to 1 Gbps (gigabit per second), or roughly 100 times faster than the global average.

Very impressive… and it’s exactly what 5G tech was designed to do. And this performance is consistent with our own field tests in Minneapolis.

Looking forward, Verizon will rapidly expand 5G coverage out from its initial coverage area in each city. Eventually, 5G will reach the suburbs… But we’re still in the early days of the network build-out right now. This is a multiyear, multibillion-dollar project for every wireless carrier in the world. That’s why the investment potential is so incredible.

(If you’re looking forward to connecting to these revolutionary 5G networks with your current smartphone, think again. The smartphone in your pocket isn’t 5G-enabled.

Billions of smartphones will have to be replaced with 5G-enabled devices. And I’ve identified the one company that will provide an essential component to every single one of them. That’s why this is my No. 1 5G stock of 2019. Details here.)

A new interface that can read your mind…

Here’s a fascinating project coming out of the University of California, San Francisco (UCSF)… With funding from Facebook, researchers have built a noninvasive brain-computer interface that can read your mind.

The device consists of electrodes worn on the head. Those electrodes “read” brain activity. When a test subject is wearing the device, it can understand the words the subject is thinking.

Facebook says this tech is being developed for patients who can’t speak anymore due to injury or illness… But while this application is feasible, Facebook’s true motivations are different.

The real reason Facebook is funding this project is to pair the technology with its augmented reality (AR) glasses.

Remember, AR is an interactive experience where your real-world environment is “augmented” by computer-generated content. AR glasses will do everything our smartphone does… and much more.

As an example, imagine having your text messages displayed in your field of vision instead of looking down at your phone. It will be a seamless experience. That’s why AR glasses or eyewear will eventually replace the smartphone.

Right now, some of the advanced AR eyewear designs are using voice commands for control. But that solution can be awkward out in public. Imagine having everybody running around barking orders at their headset. Not ideal.

So what Facebook is working on at UCSF is an exciting solution to this problem. If everyone can control their device with their thoughts, that’s an even more seamless experience.

That’s the least amount of effort required to interface with our computing devices. And it allows everyone to keep their interactions private while out in public – with no voice commands to be overheard.

Of course, there is one question that needs to be answered… Do we trust Facebook with our thoughts?

That’s what we are talking about here. This device, if perfected, would allow Facebook to literally read our minds. That’s a scary thought, isn’t it?

Granted, some people don’t actually care about privacy. But for those who do, there will be alternatives.

This tech is too powerful for the tech giants and innovative startups not to experiment with their own versions. At some point, there will be an arms race to develop the best brain-computer interface. And while we don’t hear much about it in the press, the race is not only on… It’s intense right now.

I recently wrote about CTRL-labs, a company that I saw when I was in Las Vegas at the Amazon re:MARS conference this past June. And even more recently we learned that Elon Musk’s Neuralink is working on its own model right now.

While we can be sure that Google, Facebook, and others will use this kind of technology for more behavioral surveillance in order to sell more advertising, there will be technology players that will preserve consumers’ privacy. (Perhaps Apple will be one of them.) And that in itself will be a competitive advantage…

The bat bot is coming…

An abstract from Northeastern University caught my eye this week. It is called a biomimetic robot. Basically, it’s a robot that mimics nature. And in this case, it’s a bat. 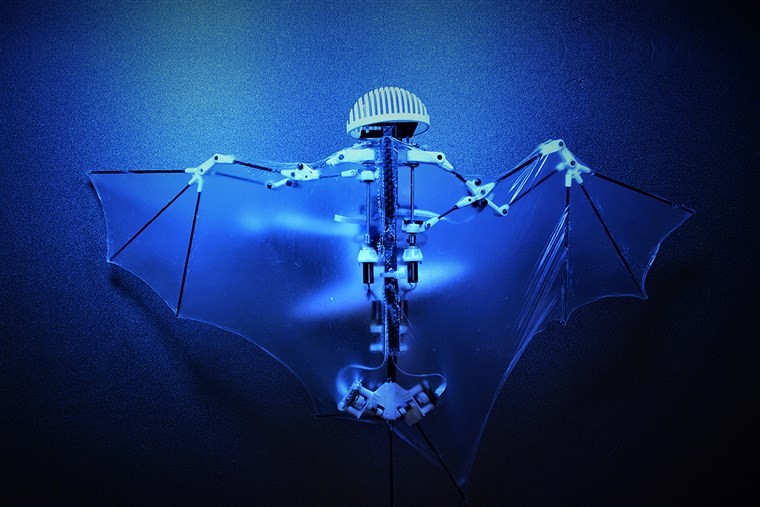 Source: American Association for the Advancement of Science

The bat bot weighs just 93 grams. And just like a real bat, it has 40 joints in its wings. This allows the wings to bend and fold. And it enables the bat bot to fly much like a real bat does.

The bat bot flies untethered. It can fly for extended periods from its own energy source.

It’s a trend in the drone industry to move toward nonintrusive drones that can be used for surveillance. Most drones that we see today are at least the size of a human hand and make quite a bit of noise, as the propellers whir and hum while in flight.

The first biomimetic robot was a life-sized hummingbird bot funded by the Defense Advanced Research Projects Agency (DARPA) back in 2011. DARPA was interested in it for military and intelligence surveillance applications.

The bat bot is just a more advanced model. It can quietly fly out to any location for monitoring. There, it is able to record video, sound, and other environmental data like temperature and humidity. Then, when its energy source runs low, it can fly back to a docking station to charge.

It is entirely realistic to have a fleet of these flying “bots” provide 24-hour surveillance of any location, virtually unseen and fully autonomous.

I expect we will see more and more of these tiny surveillance devices used for military and intelligence applications. And I expect these devices will become available to consumers in the private sector as well. That’s sure to lead to some interesting use cases.

So the next time you spot a bat flying over your back lawn in the evening, be sure you take a closer look…