But occasionally, we share other profitable ideas from our colleagues. In today’s special morning edition of The Bleeding Edge, we share a spot-on prediction from master trader Jeff Clark.

I’ve had the pleasure of speaking with Jeff on a number of occasions. He’s a fountain of wisdom and insight. He also has a knack for making contrarian calls that turn out to be true.

The gold sector is on the verge of generating its first sell signal since 2016.

Gold stocks have had an amazing run higher over the past few months. The sector has been much stronger than I anticipated. And the current rally has lasted much longer than I thought it would.

But the gold sector remains vulnerable to a sharp and swift pullback. And even though my mom isn’t talking to me these days because I talked her out of buying gold stocks last month, my advice to her would still be the same today…

You’ll have a better opportunity to buy gold stocks at lower prices in the weeks and months ahead. One of my favorite gold-stock timing indicators is on the verge of a sell signal. 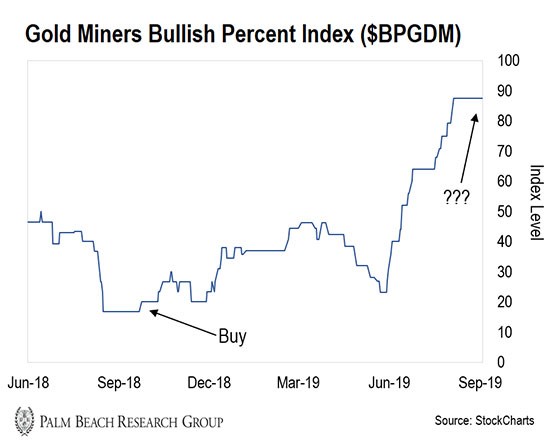 Typically, a sector is extremely overbought when its bullish percent index rallies above 80. It’s extremely oversold when it drops below 20. Trading signals get triggered when the index reaches extreme levels and then reverses.

For example, last September, $BPGDM turned higher from a deeply oversold reading of 13. That action triggered a “buy” signal. At the time, the VanEck Vectors Gold Miners Fund (GDX) was trading for a little less than $19 per share. On Tuesday, GDX closed around $30.50.

It took a while to get going, but that turned out to be one heck of a buy signal.

The $BPGDM is trading above 87. That indicates an extremely overbought condition.

It hasn’t turned lower. So we don’t yet have a “sell” signal. But the gold sector is clearly overbought. And with GDX trading nearly 50% higher than where it started the year, now is probably not a good time to be buying into the sector.

The last time we got a $BPGDM sell signal was back in August 2016. That happens to be the last time the Commercial Trader net-short interest was over 330,000 contracts. That was also the last time GDX was trading above $30 per share.

Now, I’m not saying we’re headed for the same sort of decline this time around. I’m just suggesting that right now is probably not the best time to be putting new money to work in the gold sector. We’ll likely have a better chance to do so in the months ahead.

P.S. GDX is down 3% since I first sent this to my subscribers. If they were sitting on gold stock profits – or were in a position to short gold stocks – they could’ve made good money following my advice. And anyone using the tool I showed you today will have a better shot at timing the gold market than the average investor.

And that’s important right now. While I believe gold is very likely in a new bull market and will end the year higher from where it is now, there will be bumps along the way. Bumps that traders – not buy-and-hold investors – can take advantage of.

That’s why I’m finally stepping forward to share my gold trading technique after 38 years. In June alone, you could’ve made a 269% gain in 26 days on my gold recommendations.

So to find out how you could potentially double and triple your money – without ever touching any conventional investment – check out my special presentation right here.