It was a spectacular day in Kennebunkport, Maine, yesterday, which we finished off with an unbelievable full moon rise back in Portsmouth. Pictures won’t do it justice. 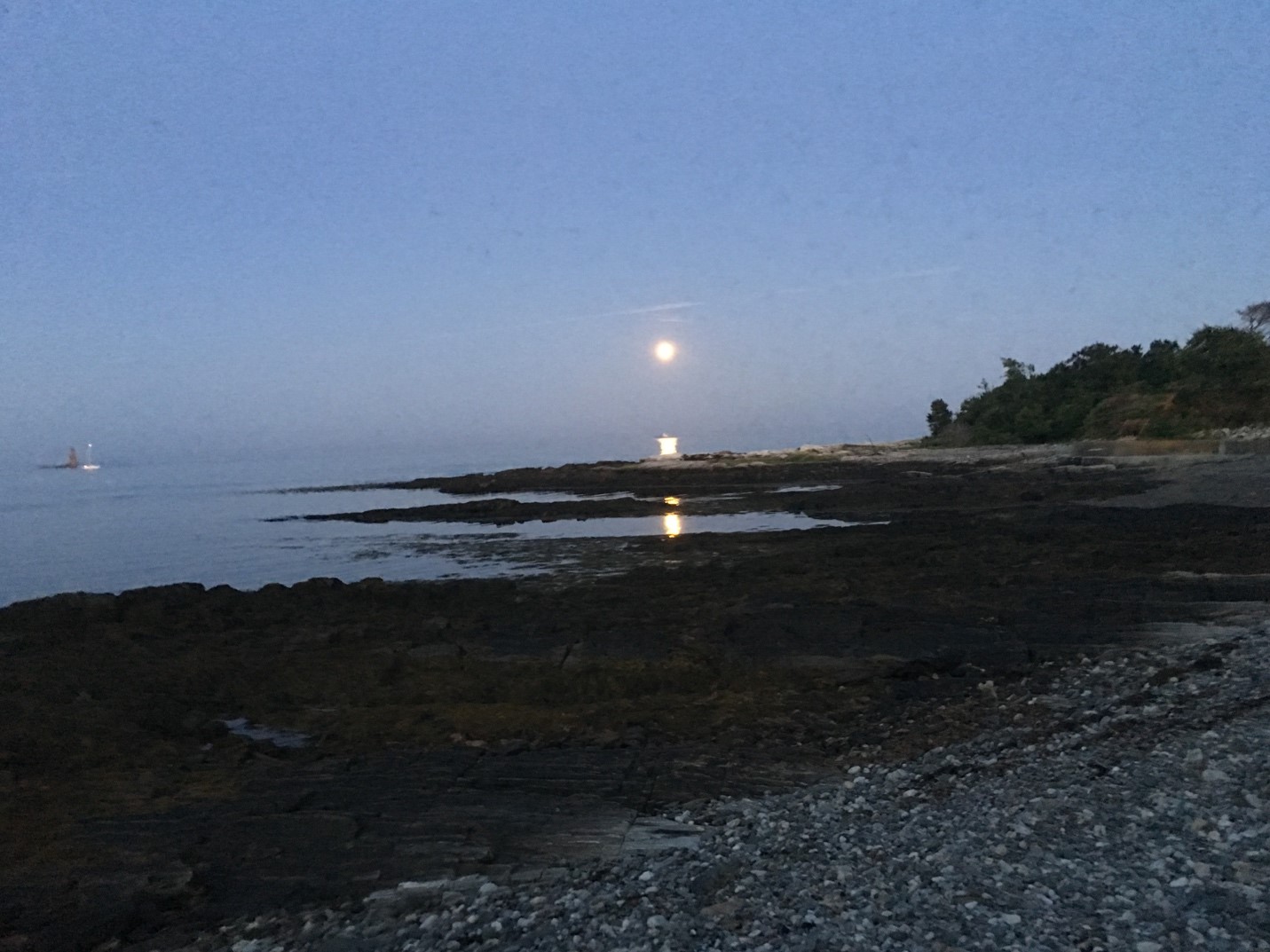 Perhaps the old wives’ tales about the full moon are true, though…

The markets have certainly been acting peculiar.

Yesterday, the Dow Jones Industrial Average had its largest drop of the year. The market is worried about a recession. And investors bid up 30-year Treasurys so high that the yield dropped to just under 2% for the first time ever.

Who in their right mind would buy 30-year Treasurys yielding less than 2%? Clearly, this kind of market action is a flight to safety.

As further evidence of this dynamic, investors have been buying up the 10-year Treasurys as well, dropping the yield slightly below the two-year’s. This is referred to as an inverted yield curve.

This dynamic is also magnified by funds speculating that the Federal Reserve will lower interest rates. They are buying more Treasurys because they will be worth more in the event of a rate cut. This drives down the yield even further.

The fear is being driven by the current trade war taking place between the U.S. and China. And both China and Germany put out poor economic numbers this week, showing the clear impact that it is having on global economies.

Ironically, U.S. retail sales increased in July as if nothing was happening at all. The labor market is one of the best in history, and the U.S. continues to see strong economic growth.

This market action is more incentive than ever for the Federal Reserve to cut the federal funds rate by at least another 25 basis points. It still has plenty of room to move, and this would be a catalyst for healthier market activity. The other catalyst, of course, would be a trade agreement between the U.S. and China.

I continue to believe that this market volatility is just temporary. I would feel differently if the U.S. economic conditions and the labor market were poor, but they are quite the opposite right now.

The U.S. stock markets have a lot to look forward to in the coming months, and these pullbacks are presenting some great investment opportunities.

I’ll keep a close eye on the market for you. In the meantime, let’s turn to our insights…

Forget the Russians… The problem of influencing elections is happening right here in the U.S.

And Google is the culprit…

Two ex-Google engineers have come out with details on what the company is doing to influence election outcomes… And what they revealed is quite damning.

To start with, Google introduced left-leaning bias into its search algorithms. It is designed to push left-leaning content up, making it appear more prominent.

Google is also censoring conservative-leaning content on YouTube. It is suppressing YouTube channels… pulling videos… And it has even removed Republican political ads from the network. These were ads that were paid for, by the way.

One of the engineers interviewed went as far as to say, “They are constantly looking for ways to manipulate the electoral process.” The other commented that CNN links were recommended on 20% of news-related search results because CNN’s agenda is aligned with Google’s. That engineer also stated how obvious the bias was considering that there are thousands of news sources to select from…

As I wrote on Monday, 93% of internet users use Google as their default search engine. It is arguably more powerful than Facebook for that reason.

The fact that this one company is trying to influence the way we think is beyond troubling. It is also a bad business practice that will get the company into deep trouble with regulators.

All that most consumers want is unbiased information and news so they can decide for themselves what to think. Google is doing a deep disservice to its users, which are the source of all its revenue.

As I also wrote on Monday, the ironic part is that Google wants to be seen as a virtuous company. Clearly, that’s not the case. Who is Google – or any other corporation – to decide what is best for society?

So again, if you would like to use an unbiased search engine, give DuckDuckGo a try. DuckDuckGo does not track you or capture your data.

Or try the Brave browser, which provides a search engine and pays its users in its own digital currency… effectively sharing the advertising revenue with the user.

The user experience for both is roughly on par with Google’s.

Security tokens are digital representations of real-world assets. They combine the best aspects of cryptocurrencies with those of traditional securities.

Security tokens live on a blockchain network. That enables transparency and nearly instantaneous peer-to-peer trading 24 hours a day. But they also convey ownership interest in the asset. That entitles investors to dividends, interest payments, and royalties… depending on the asset type.

tZero is a subsidiary of Overstock.com that’s focused on blockchain technology. It launched trading with two tokens.

The first is tZero’s native token. The second is a digital version of OSTK – Overstock’s common stock. This makes Overstock one of the first companies to tokenize its equity into a security token.

Trading on tZero has been limited only to accredited investors and institutions for the past year. But the lockup period has ended, and the platform is now open to anybody.

What’s exciting about this is that normal investors now have access to security tokens. This is a big step toward bringing the asset class mainstream. And this will be a major trend for the last part of 2019. We’ll see the security token ecosystem grow rapidly from here.

Think about this: There is an estimated $256 trillion worth of real-world assets out there. Many of these assets have no liquid market right now. Think classic cars… watches… art… commercial real estate… It’s not easy for normal retail investors to invest in these things right now.

But these assets will eventually be “tokenized” by creating a security token like tZero that can trade on an exchange.

And by using a security token, the assets can be fractionalized. In other words, a retail investor could purchase a fraction of a token representing $1,000 worth of ownership in the Empire State Building.

This is going to unleash a flood of liquidity upon the world… And it will enable everyday investors to get exposure to the types of assets previously reserved for accredited investors and institutions.

I have said many times that 2019 is an inflection point for artificial intelligence (AI)… And we just got more proof.

Semiconductor company NVIDIA just set some performance records for conversational AI. This is AI that can understand and engage in conversation.

Here’s the rub… Using a massive data set, NVIDIA was able to train an AI to engage in conversation in just 53 minutes. That’s starting from nothing. They got the AI from no language skills to full competency in less than an hour.

That’s a testament to NVIDIA’s graphics processing units (GPUs) and AI software. Basically, the hardware and software have become so powerful that all you need is a large data set to train an AI. And this holds true for more than just spoken words.

It doesn’t matter if it’s language, images, video, or factory automation techniques… All you need is a large enough data set to create intelligent, competent AI-driven output. This is going to disrupt every industry in the world…

And everybody in the world of AI right now will want to get NVIDIA’s product. The company has positioned itself as a key semiconductor company enabling artificial intelligence and machine learning.

P.S. We’re precisely one week away from my free 5G investing summit, The Final Phase of the 5G Boom.

Next Thursday – August 22 – at 8 p.m. ET, I’ll reveal my method for picking the fastest-moving 5G small-cap stocks. I’ll even give you a “Phase 3” 5G company to add to your watchlist.

The type of investments I’ll talk about next Thursday is very different from the recommendations I make in my large-cap service, The Near Future Report. There, I recommend stable, “sleep well at night” technology stocks that will deliver healthy returns year after year.

But on Thursday, I’ll show another breed of 5G stocks. I’m talking about small-cap investments that could 10x your money as the 5G megatrend unfolds. If you’re serious about investing in the 5G boom, I hope you can join me. Reserve your spot right here.