Van’s Note: Happy New Year! Van Bryan here, Jeff’s longtime managing editor. As a bonus for readers, we’re sharing a special series of The Bleeding Edge from Jeff’s presentation in Carlsbad, California, back in September at the Legacy Investment Summit.

Our snapshots from his talk have covered self-driving cars and augmented reality… And today, we touch on another huge trend happening right now: artificial intelligence (AI). Read on to see some of the amazing ways AI is changing the world around us…

The world is changing due to technology. And there is something underpinning all this technological development we see around us. Guess what? It’s AI and machine learning (ML). This is what underpins everything.

This revolution taking place in 2019 is unlike anything I’ve ever seen before, and my research takes me all over the place. I follow any lead because I find that diversity and my research inform better investment decisions.

It’s important to look at the underlying threads that are driving an industry. I spend a lot of time every day reading the tea leaves to find out how rapidly a technology is being adopted and developed. And I look at private capital, private equity, and venture capital.

In the artificial intelligence world, if you look at 2015, there was only $8.8 billion invested. That’s not much in the scheme of the venture capital industry. But look at what happened by 2018. Almost $50 billion was invested in AI and ML companies. And 2019 will be even larger than 2018. 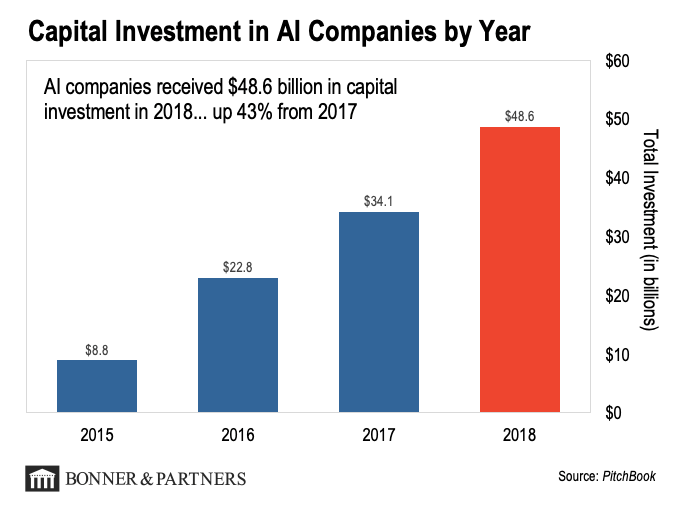 And the progress that’s being made has not gone unnoticed by the big giants – Apple, Google, Microsoft, Facebook, Amazon. They’ve been the largest acquirers of private early stage AI companies, and they’re taking that tech and putting it to use. Many of us don’t even realize that we’re using AI every day in our normal products.

If you go to Google and type something in, guess what? Artificial intelligence powers it. If you use a voice assistant like Apple’s Siri, Microsoft’s Cortana, or Google Assistant, that’s all AI. It’s natural language processing and AI applied to search algorithms. It’s extraordinary; it’s pervasive in our lives. We don’t even realize how pervasive it is.

And the biggest problem we have in the industry right now is people. On the nearby graph, the lower bar shows that 400 out of every million job seekers are looking for an AI job, but 1,200 jobs out of every job opening are for AI and ML. There are three times more jobs are available than there are applicants. There are over a million jobs unfilled in AI and ML. 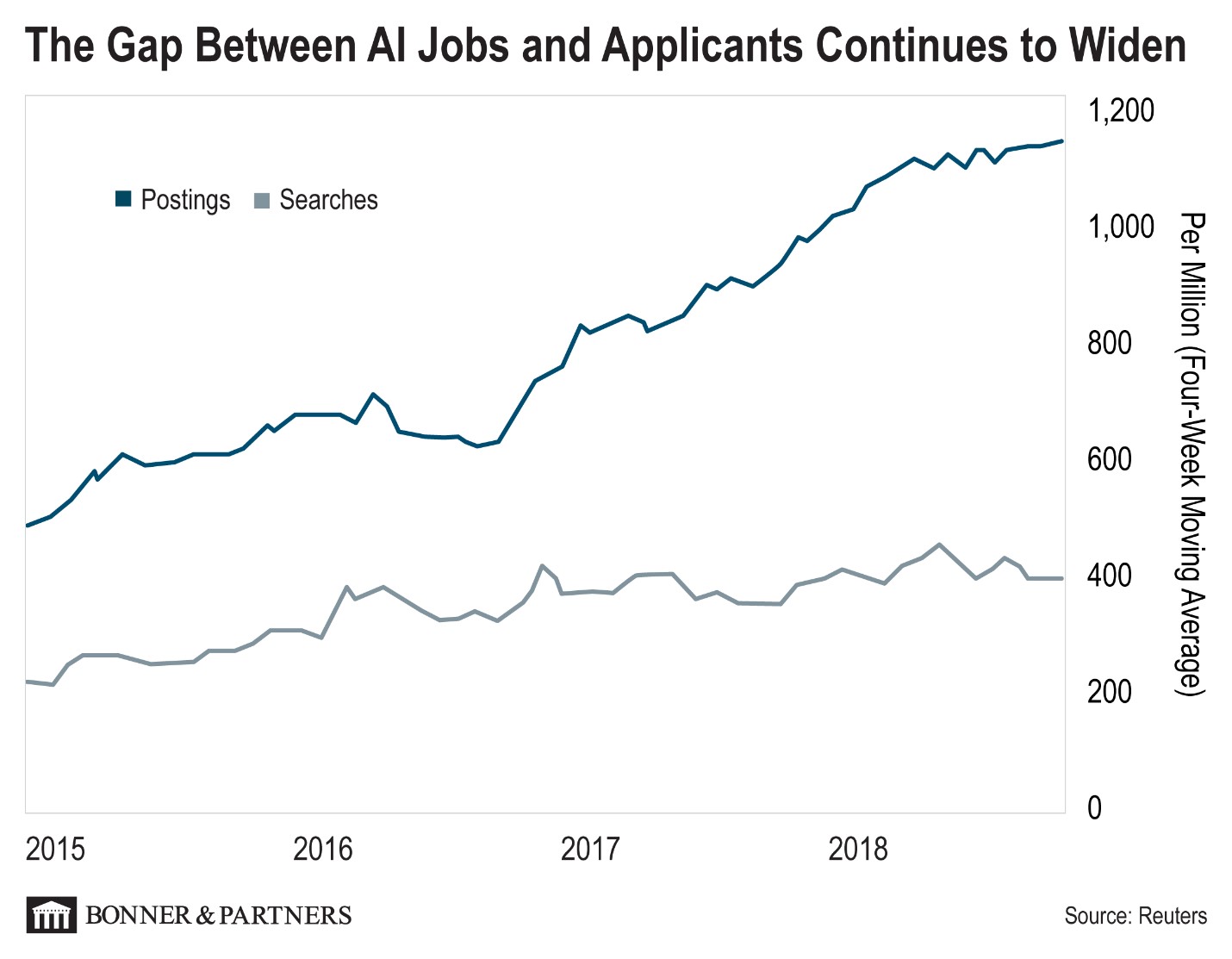 If we care at all about our kids, or in some cases our grandkids, the best thing we can do is to make sure they’re educated in data science and machine learning. There are guaranteed, very high-paying, six-figure jobs available – sometimes seven-figure jobs if you are well versed and educated in AI and ML. That is truly one of the greatest gifts we could give to a younger generation. This is an absolute requirement.

And I also look at research and intellectual property a lot, and one of the most prestigious conferences of the year is the Neural Information Processing Systems Conference (NeurIPS). 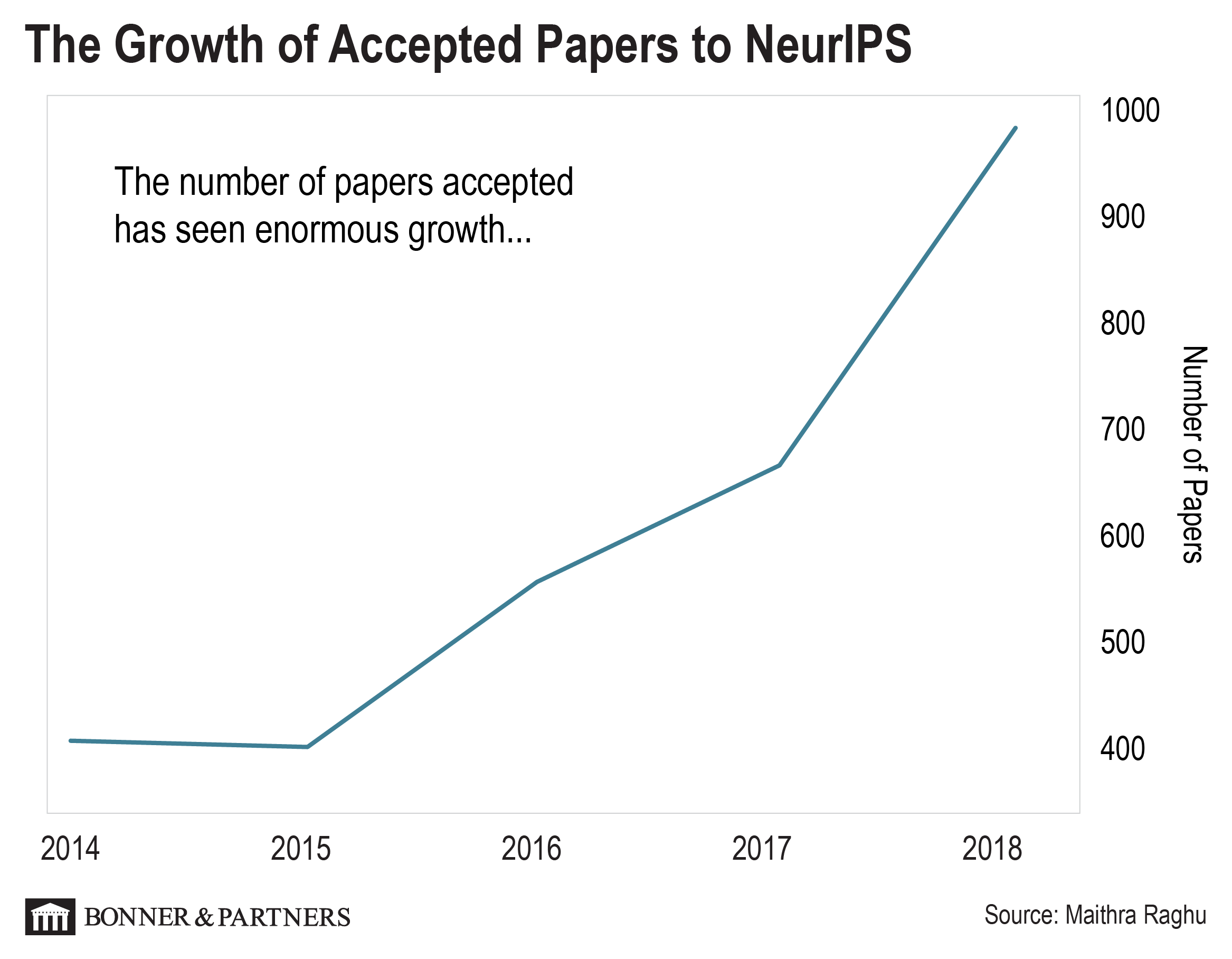 And extraordinary developments are in these papers. The numbers are moving so fast that nobody can grasp how quickly it’s happening or how valuable these advancements are.

One is a paper that came out of DeepMind. This is a company that Google acquired back in 2014 for about $500 million. This is the same company that produced the AlphaGo AI, which beat all the world’s best players in Go.

That was immensely difficult because it requires pattern recognition. There’s not enough computing power on the planet to memorize all the possible outcomes of the game, and AlphaGo beat the best players about 10 years ahead of when the best AI experts predicted it would happen.

This piece of research is extraordinary because it developed a new artificial intelligence model that’s able to train an AI with a very small set of data, and I’ll tell you why this is significant.

Well, DeepMind came out with an AI that can take 13 pictures and outperform the previous model of artificial intelligence. Just 13. And the reason why this is so meaningful is that last year, only the big companies could afford to essentially buy or create these massive databases to train these AIs. Those are the only companies that could compete.

Now, if you only need 13 images, guess what? Anybody can produce an AI product. Anybody can work with machine learning and make it effective not in a matter of years or months but in a matter of days. And what’s powering this? Semiconductors that are being designed explicitly for AI and ML.

The biggest semiconductor that’s ever been manufactured in the world is now the size of a plate. Look at the smile on that guy’s face. He says, “I’ve got the biggest one. You can’t have it,” right? 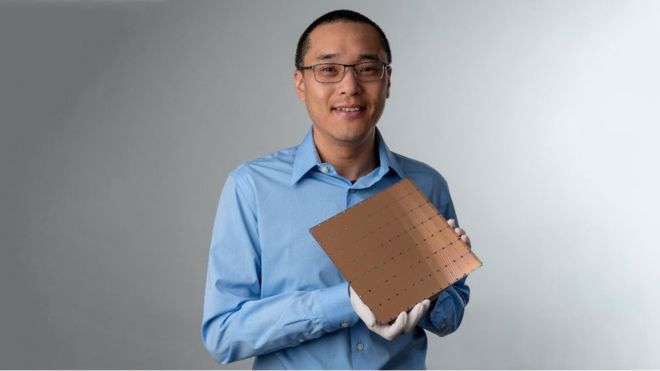 We call it a wafer-scale semiconductor because it’s literally the size of the semiconductor. You can see a chip by NVIDIA, a fabulous company, next to it just for scale. So the Cerebras chip, built by a private company, will deliver performance that’s 100 to 1,000 times faster than anything we’ve ever seen in the world. I’m not talking 10% or 100%… I’m talking 100 to 1,000 times faster.

So this is a workhorse. This is a powerhouse in AI. And guess what? The Department of Energy has already signed up to be its first customer. It wants to own all the production from Cerebras right out of the gate. The Argonne National Laboratory and the Lawrence Livermore National Laboratory both have multiyear deals.

It’s going to be used for health, science, and engineering. It’s going to process some of the most complex problems that we’re dealing with in society on a global level because this chip is so powerful.

And it’s not just big chips; it’s small ones, too. Here’s another one of my favorite companies, Syntiant.

A Chip Smaller Than a Penny 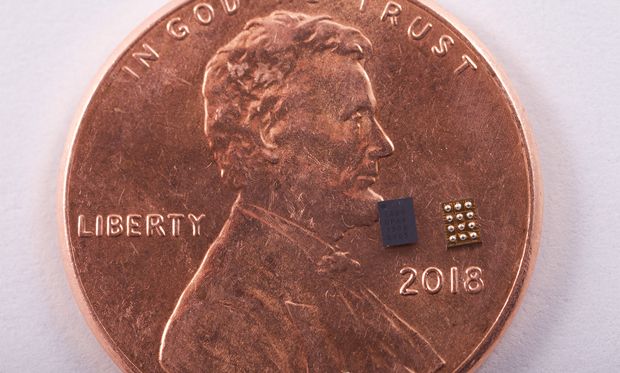 Look at the size of that chip on the penny. This is a tiny, tiny device. What’s extraordinary about it is that it’s an AI chip that recognizes natural language. So it requires almost no power to stay awake, and it can recognize spoken commands with a two hundredfold improvement on power consumption compared to the way today’s microcontrollers.

This chip is so tiny, it will sit just on the tip of your finger and can fit in just about any kind of electronics device – a health monitoring device, a smart watch, a phone, a tablet, or anything you can imagine. They’re going to all have these chips. And it’s not just hardware.

Another thing happened at the Allen Institute of Artificial Intelligence, a nonprofit that the late, great cofounder of Microsoft, Paul Allen, created. The institute put together an AI that analyzed almost 2,000 supplements, 2,700 prescription drugs, and 56,000 interactions between all of them. Is there any physician in the world who can do that? Of course not. But the AI did it in just a matter of weeks.

This is an extraordinary reference to empower us from a health perspective. The URL is supp.ai. I really recommend you go check it out. I did a search. I just typed in “diclofenac,” a common anti-inflammatory, and it gives you a list of all the different dietary supplements and some prescription medicines that it might interact with on a positive or negative basis.

And here’s the big one. This is a whopper, and I need to warn you, this is heavy, so bear with me for one moment.

On the top graph, this is something called a Kuramoto-Sivashinsky model. It’s a mathematical model for flame propagation – how flames from a fire will propagate as a fire expands. It’s extraordinarily complex.

A group from the University of Maryland trained an AI on that model, and the very bottom picture shows the machine learning’s predictive capability for a chaotic system like this.

And you see these tiny units on the bottom indicating Lyapunov times. Lyapunov time is the time it takes for a chaotic system to become exponentially more chaotic to the point where we can no longer predict it.

So what happened here was this AI was able to predict the future eight Lyapunov times – eight times after it had already gone exponential.

And I’m not kidding – this means we can predict the future for extremely complex systems – the simplest of which being weather, right? This will allow us to predict the weather most likely weeks, sometimes months, in advance. Imagine that. Or cardiac arrest could be predicted using health monitoring devices.

One input of energy produces six or seven outputs of energy with no radioactive waste. That’s nuclear fusion, not fission.

And, yes, of course, we’re here to invest and make money and prosper, right? It could predict equity prices. There is just so much opportunity in this space.

P.S. We will be back to our usual Bleeding Edge insights tomorrow. Keep an eye on your inbox. We have an exciting year ahead of us…