In the news recently is the forthcoming IPO of the world’s largest oil company, Saudi Aramco.

Saudi Aramco is also the world’s most profitable company. It is targeting a valuation of around $1.7 trillion at the IPO. That would make it not only the largest IPO in history, but also the most valuable publicly traded company in the world.

Ironically, we’re going to look back on this IPO as the beginning of the end of the dominance of oil…

China and India are both racing to build-out third-generation nuclear fission power plants to meet its baseload power requirements.

And several companies are working towards completely clean nuclear fusion reactors (the power of the sun) with no radioactive waste at all. My favorite company of the bunch will have a working compact fusion reactor within five years. (Subscribers to my small-cap investing service, Exponential Tech Investor, can learn more about this early stage fusion company right here.)

The mass consumer market is moving towards affordable electric vehicles which will be fueled by nuclear fusion, nuclear fission reactors, and clean burning natural gas… and the demand for oil will drop dramatically. Carbon emissions will also drop dramatically as well…

My mission with The Bleeding Edge is to highlight how technology is transforming our world. That’s what technology does. It disrupts.

In this case, clean energy will replace carbon emissions. Electric vehicles will take the place of internal combustion engines. This upcoming IPO is one for the history books… literally.

I’m on record saying that artificial intelligence (AI) will be one of the most transformative technologies of the next decade and most certainly this century. But very few of us understand just how fast AI is progressing. Well, this first insight really puts that into perspective.

OpenAI just put out a fascinating graph that charts the amount of computer processing power required to run complex AI models going back to 1960.

As a reminder, OpenAI is the AI research entity launched by Elon Musk and technology entrepreneur Sam Altman. It’s dedicated to developing AI in an ethical way. 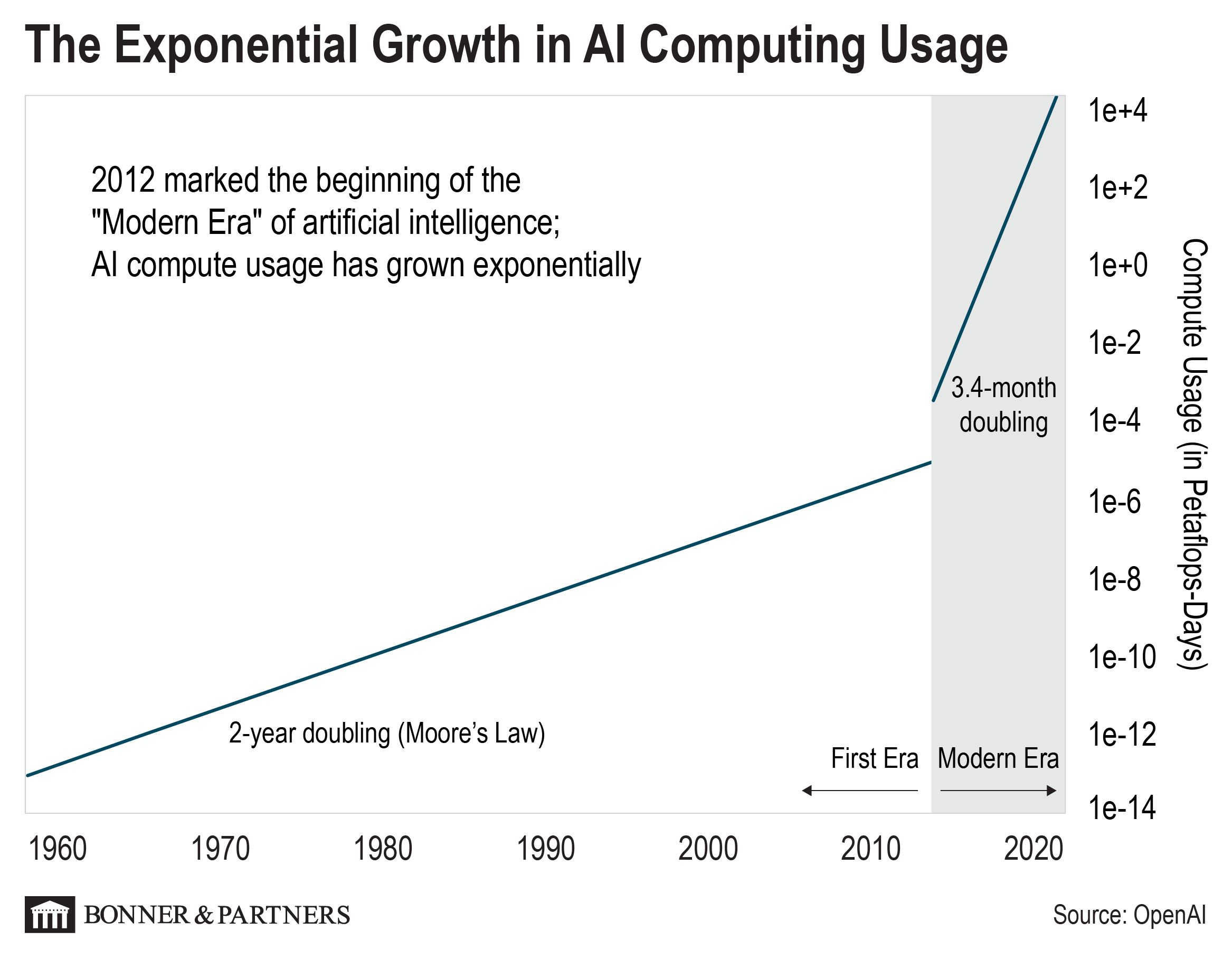 As you can see above, from 1952 to 2012 the processing power required to train an AI on large data sets doubled about every two years. That’s in-line with Moore’s Law of exponential growth.

As a reminder, Moore’s Law is typically considered the “gold standard” for exponential growth in the field of high technology.

What’s striking is that computational power took a big jump up in 2012. In fact, it has doubled every 3.4 months since then.

So if we look at the exponential growth happening with AI… it now dwarfs Moore’s Law.

For that reason, OpenAI is calling this the “modern era” of AI. Everything that happened before 2012 was the “first era”.

And keep in mind that the above chart is in logarithmic scale. A logarithmic chart is typically used to make exponential growth easier to visualize. The y-axis of the chart is not linear, the computer processing metric, “petaflop/s-days”, increases by magnitudes rather than incrementally.

Logarithmic charts typically look like a straight line heading toward the top right of a chart. Because the chart is not linear, it “flattens” out the hockey stick curve we normally see with exponential growth.

But as we can see above, the growth of processing power for AI is so explosive that the logarithmic chart still looks like a hockey stick.

And that means AI now has the ability to solve problems that were nearly unthinkable just five years ago. This is going to change our world drastically in ways we can’t easily predict… and it’s nearly impossible for our linear-thinking human minds to grasp the significance of this kind of incredible growth.

As I’ve told readers of my Exponential Tech Investor service, we’re seeing a clear inflection point in AI right now. We can expect to see breakthrough after breakthrough coming over the next few years.

And that spells major opportunity. AI will also provide us with some of the best investments of our lifetimes.

Google is getting into banking…

News just came out that Google is jumping into the banking industry. It wants to offer checking accounts to consumers.

The project code name is “Cache” and it’s expected to launch next year with accounts run by Citigroup and a credit union called Stanford Federal Credit Union.

Of course, Google claims it wants to help consumers to “do more stuff in a digital way online”… But we know that’s bunk.

Google wants into banking so it can monitor and mine our financial transactions throughout the year. It’s just another data grab in Google’s quest to build a complete profile of all of us.

As for the timing of this move, Google clearly was eyeing the incredible launch of Apple’s credit card earlier this year. Goldman Sachs, who provides the financial services for Apple Card, said it was the most successful credit card launch in history.

So I’m not surprised that Google wants to break into the space as well. The difference is, Google’s motives are sinister, whereas Apple simply wants to provide consumers with an easy way to buy more Apple products and do what it does so well – redefine a category and make its brand sticky. In short, Apple makes its money from products and services, not data.

I am also not surprised to see Google partnering with Citi on this. That’s a smart move. Obviously, Google becoming its own bank would raise all kinds of red flags. Instead, Google is trying to play nice and make allies in the industry and do its best to keep itself out of the crosshairs of the government.

Intel is back in the news again. And again, it’s for bad reasons.

About 18 months ago, independent researchers discovered fatal security flaws in Intel semiconductors. The flaw was bad. It allowed hackers to run code on any Intel-based computer to get access to sensitive data.

To make matters worse, the vulnerability was in every Intel chip. That meant a large swathe of the world’s servers and PCs were at risk… Intel was committed to solving the security problems and recently made dozens of patches available to address the issues.

So it’s been a year and a half, and Intel still hasn’t addressed the issue. The worst part is that there is a fundamental problem with Intel’s semiconductor architecture. This is terrible news for the company and for consumers around the world.

Simply put, I would not want a computer or a server with an Intel chip in it. Not just because there was a security flaw – that’s going to happen from time to time. But the real issue is that Intel hasn’t been able to fix the problem.

That doesn’t give me any confidence in the company…

If I were an enterprise buyer of computer servers, I would absolutely be looking for different semiconductor solutions. After all, if there are better alternatives available, why take the risk?

Worse for Intel, the same researchers tested Advanced Micro Device’s (AMD) chips and did not find any vulnerabilities.

(Readers of my large-cap research service, The Near Future Report, know AMD well. We’re sitting on gains of 254% in our model portfolio as I write this.)

Yes, Intel is a beast of a company that generates impressive cash flow. But its revenues for the most part are flat, and it continues to make one misstep after the other, putting it years behind the best semiconductor companies in the industry.