Amid the chaos that continues to unfold, I’d like to start the week with some encouraging data concerning the rapidly declining fatality rate (mortality rate) for COVID-19. I’m going to pick one country, the U.S., because it is where some of the worst fear-based “journalism” has been taking place.

What is remarkable when we see these numbers isn’t just the dramatic fall from 4.06% to 1.24% (and dropping) but the speed with which that happened… 15 days. The fatality rate more than halved since March 8.

And the decline will continue rapidly.

In addition to the 400,000 test kits a week that Roche has begun supplying in the U.S., Abbott just received emergency use authorization from the Food and Drug Administration (FDA) to distribute and use its COVID-19 diagnostic test. Its goal is to supply one million tests a week.

With these two pharmaceutical giants’ testing kits, the number of confirmed cases will spike. That might sound alarming, but it is wonderful news. We will be capturing the mild and moderate cases, and I expect the fatality rate will drop well below 0.5%.

And those numbers won’t even include the asymptomatic cases – cases where people don’t know they are sick – which means the real number will be even lower.

Let’s all stay focused on the numbers and avoid the attention-grabbing headlines from the press.

In the next few days, I’m going to share some early data from clinical trials that are using existing drugs to fight COVID-19 – very promising numbers.

But for now, let’s turn to our insights. To start, one company is taking an unusual approach to treating the virus…

Moderna is an interesting company engaged in the fight against COVID-19. This company is working on a synthetic vaccine that just entered Phase 1 human clinical trials. This vaccine is unique for two reasons…

Moderna is creating a synthetic version of RNA that will be injected into patients. RNA is biological material that carries genetic code. Basically, RNA tells our cells what functions to perform.

In this case, the synthetic RNA will cause the patient’s body to produce antigens (viral proteins) that look like COVID-19. In response, the immune system will produce antibodies that can fight off the virus.

It’s a great theory. It is a synthetic approach to teaching the body how to fight a virus. But here’s the other thing that makes Moderna’s vaccine unique – it hasn’t been tested on animals.

That’s right – Moderna got FDA permission to skip the animal trials that are typically required before a therapy can be tested on humans.

And the Phase 1 clinical trial will test Moderna’s vaccine on healthy people… not patients infected by COVID-19. The sole purpose is to make sure the vaccine is safe.

Moderna is registering 45 healthy volunteers for the Phase 1 trial. These volunteers will get two shots about a month apart.

Some volunteers will get a low dose of the vaccine. And some will get a high dose. But they won’t know in advance what dosage level they are getting. Think about that…

Suppose you were asked to volunteer for a vaccine that’s never been tested before, and you don’t even know if you are getting a high or low dose. How much money would it take for you to volunteer for such a trial?

I think I would ask for a couple more zeroes in there before I volunteered for a therapy that hadn’t even been tested on animals before.

This is an extremely unusual case. Most vaccines take 15–20 years to produce. They must make their way through trials on at least two different animal types. And then they go through a lengthy human clinical trial process.

In this case, Moderna is jumping right into human trials. That tells us just how urgent this issue is seen to be.

And the reality is that this may change the process of clinical trials in the future. This would especially be the case if Moderna is successful. It would also result in a boom for synthetic biology.

Moderna isn’t the only company testing therapies for COVID-19. There are currently more than 80 clinical trials that have already started or are pending in China working toward a vaccine.

And American companies like Gilead and Regeneron are also working toward treatments. It’s encouraging to see this much attention being given to COVID-19 from bleeding-edge technology firms.

I’m confident the world will soon have an effective vaccine to counter COVID-19.

In the age of COVID-19, several of us will probably think twice before we touch payment terminals like the ones from Square that small businesses use. The good news is that soon we might not have to.

Google announced that certain new Android smartphones will come with a built-in radar sensor. This is the biggest smartphone innovation in quite some time. Here’s why…

This new radar sensor will kick motion detection into high gear. It will allow users to control their phones with hand gestures.

Instead of physically touching the screen to scroll, zoom, or minimize, users can simply make the same gestures in front of the phone to perform the same action.

And users will be able to perform even more detailed actions on the phone, simply using finger motions. Handwriting is a great example. Look at this: 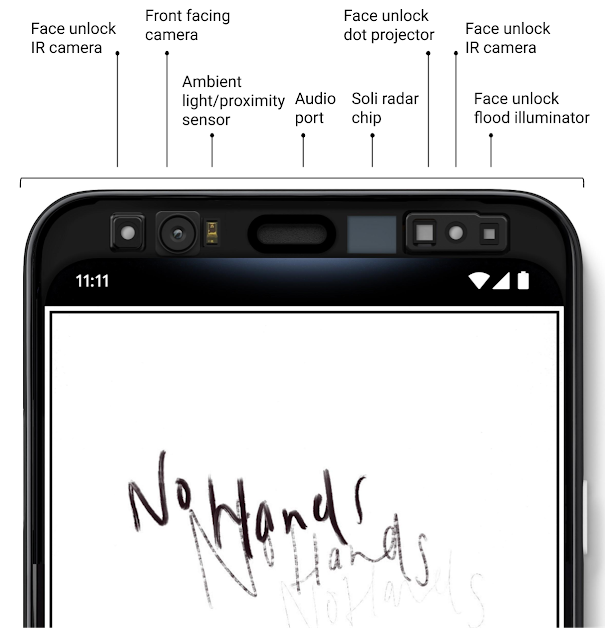 We can see the radar sensor at the top of the phone in this image. And the writing on the screen was done simply by making the gestures in front of the sensor. No physical touch necessary.

That may seem like a novelty, but what’s going on right now illustrates a great use case.

I made a purchase from my local butcher shop this week. The shop takes credit card payments using a Square terminal, which requires buyers to sign using a finger on the screen. Given the COVID-19 outbreak, I was very hesitant to touch the screen.

COVID-19 can survive on surfaces anywhere between a few hours and a few days, depending on the type of surface. I wish I could have signed using finger motions in the air instead.

But there’s no doubt this technology will enable all kinds of fun, useful, and creative applications that we haven’t thought of yet. I can’t wait to see what comes from this.

And I would be remiss if I didn’t point out that this technology is only possible thanks to artificial intelligence (AI) and machine learning.

Google used machine learning to train an AI model on millions of gestures from thousands of volunteers.

So this is yet another practical example of how AI is reshaping our world. We’ll see this tech rolled out in some high-end smartphones first… then midrange phones… and eventually, it will become ubiquitous.

Intel is releasing a computer system that mimics the human brain…

Let’s take a respite from insights around the virus and finish with an interesting development in computing architecture.

Intel (INTC) just announced that it is rolling out a neuromorphic computing system this month. The system is called Pohoiki Springs.

It is designed to simulate the way the human brain works to perform computations. This is a game-changing breakthrough for several reasons…

The human brain is the most efficient “computer” on Earth. It can harness enormous processing power using far less energy than a classical computer. And that has everything to do with structure.

Classical computers are made of compartmentalized hardware, each part with a specific function. There are parts designed for processing. Other parts for memory. Still other parts for graphics… and so on.

These parts function independently to make the computer work. And, of course, classical computers need separate software programs to engage the hardware.

The brain is the opposite. It is composed of billions of interconnected neurons and trillions of supporting glial cells. This interconnected structure allows the brain to perceive, interpret, store, analyze, and redistribute data at the same time.

In essence, the brain acts like both hardware and software.

This allows the brain to engage the same processing power using far less energy. That’s because the same calculations that would take a computer millions of steps to complete only require a few hundred neuron transmissions from the brain.

This allows the brain to function with less than the amount of energy needed to power a light bulb.

By comparison, the world’s top supercomputers require enough energy to power an entire building to harness the same processing power.

And Intel’s Pohoiki Springs system has provided early evidence that neuromorphic computing not only works but also can make AI far more efficient. That’s because it can train an AI with much smaller data sets than today’s AIs require.

Longtime readers know I’m not a fan of Intel. But I have to give the company a tip of the hat for the progress made on neuromorphic computing.

That said, the rest of Intel’s business is struggling. The company has failed to hit milestone after milestone.

So despite this breakthrough, I still urge readers to steer clear of INTC. There are far better semiconductor companies to invest in out there.

P.S. As you know, I’ve been closely tracking the progress of COVID-19 and its impact on financial markets. I know the recent volatility can be gut-wrenching. And I believe the mainstream media is fueling the flames of fear and panic.

As a result, many people are scared right now. We see this every time we go to the grocery store. Shelves empty fast.

And now some stores are limiting how many “essential items” each customer can buy.

To be blunt, I believe the mainstream media’s coverage of this outbreak is one-sided and dishonest. It is sowing panic and unrest rather than reporting the facts objectively according to the data. What’s more, it offers very little useful information.

For this reason, I’ve put together an emergency briefing on ways to protect your health and your wealth during the COVID-19 pandemic.

In this briefing, we smash some of the most dangerous myths about this coronavirus. We reveal the one critical item everyone in your family should have – and it’s not a surgical mask.

I believe this information is absolutely critical right now. To access the briefing, simply go here.