Finally, we are seeing a market pullback caused by uncertainty around the impact of COVID-19. This was long overdue.

Yesterday was one of the largest drops in the Dow Jones Industrial Average in a long time… −3.56% on the day. And as I write this around 1 p.m. today, we’re down another 1.6%. And the Nasdaq Composite is no different.

While these moments are never comfortable, if it weren’t for the virus, the markets would still be on a roll. And the economic numbers coming out of the U.S. remain remarkably strong.

The reality is that the market was overdue for a breather, as many segments were supporting unsustainable valuations. I’ve been waiting for a nice pullback to present buying opportunities for fantastic bleeding-edge companies. We’ll have to see how things unfold over the next week or so, but this is likely it.

Since last June, Tesla (TSLA) has climbed 412% to its recent high this month. That’s an incredible move for a company valued at more than $150 billion.

Japanese publishing house Nikkei just did a “teardown” of a Tesla Model 3, which I got a kick out of. This is Tesla’s lowest-end vehicle. Nikkei gutted the car to conduct a thorough analysis of how it was made. And its conclusion was that Tesla is at least six years ahead of its closest competitors in the industry.

A Teardown of the Model 3 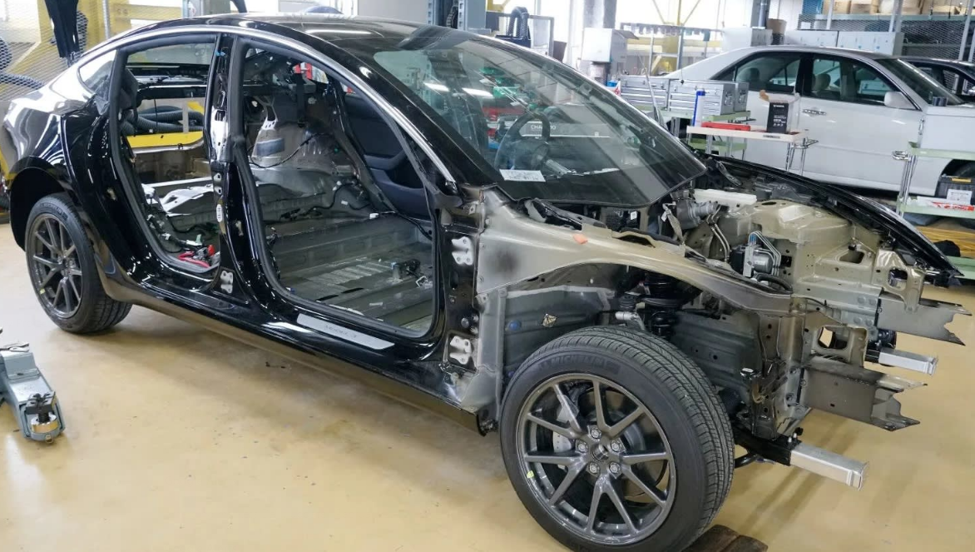 That’s quite a statement coming from Japan, which has been a hub for automotive innovation for the last three decades. It’s the home of automotive giants Toyota, Honda, and Nissan.

Nikkei fixated on Tesla’s AI-enabled control unit. This is a Tesla’s “brain.” It’s what powers all the self-driving capabilities. It’s what takes in all the data from the car’s many sensors, processes it in real time, and uses it to make safe driving decisions.

Nikkei talked about Tesla’s control unit with an engineer from a Japanese automaker. His quote was stunning: “We cannot do it.”

That led Nikkei to suggest that it wouldn’t be until at least 2025 before other car companies could possibly catch up with Tesla.

But I don’t see that happening for traditional automotive manufacturers…

For one, Tesla follows a completely different design methodology. Tesla built its computing platform first. Then it constructed the car around it.

By comparison, traditional automakers build the car first. Then they install the computing systems and control units into the car. That may sound like mere nuance, but the design methodology is completely different.

Tesla “upgrades” its cars through software updates automatically throughout the year… just like downloading a new operating system to our smartphones.

For just about every other car manufacturer, we suffer the inconvenience of scheduling an appointment to bring the car to the dealer to receive a software upgrade to fix a problem.

Also, Tesla has taken control of the key components that go into its cars. It is designing its own semiconductors and controlling its own supply chain. That’s not happening with the legacy incumbents.

That’s because the automakers have ceded too much control to the Tier 1 suppliers. This is something I know firsthand from my years of working in the auto industry, providing key semiconductors to Tier 1 automotive suppliers.

The suppliers often produce and sell complete systems, not individual components. It’s far more cost-effective for them, and it simplifies manufacturing for the car manufacturers. But this leaves the automakers with very little flexibility in their designs. They can’t fully customize their cars. Instead, they must buy the packages produced by the suppliers.

Incumbent car companies are truly manufacturing companies. Tesla is really a technology company… and one of the most advanced artificial intelligence companies on the planet.

So Tesla’s approach has been radical, but it is comprehensive. And it leaves room for complete optimization. This has led to a huge competitive advantage and higher valuations that will prove to be sustainable in the long run.

The bottom line is that we can expect Tesla to be an industry leader for many years to come.

An AI just discovered a new form of antibiotics…

Here is some fantastic research coming out of MIT. Researchers have discovered a new form of antibiotic that appears to be capable of fighting some of the most drug-resistant bacteria. That alone is great news.

But what’s incredible is the fact that it wasn’t human researchers who made the discovery. It was artificial intelligence (AI).

The researchers at MIT applied a form of AI called deep learning to a database of 2,500 drugs and natural compounds to figure out which ones fought well against E. coli (a very common bacteria found in our lower intestines that is usually harmless). In doing so, the AI determined what kind of molecular construction was optimal for antibiotics.

Using that information, the deep learning analyzed 6,000 other compounds used for treating a wide range of human diseases. What’s key here is that researchers didn’t restrict this data set just to antibiotics. They included compounds for all diseases. Then they went even broader and applied the deep learning to a database of 107 million compounds.

Three days later, the AI returned a shortlist of 23 potential antibiotics. Of those, the researchers identified two that show a lot of promise.

Using traditional methods, it would have taken years – perhaps decades – to identify these compounds. Using AI, researchers were able to cut that time down to just three days. And that will save tens or maybe hundreds of millions of dollars.

To be clear, these two compounds will still need to go through the Food and Drug Administration (FDA) clinical trials process before a commercial drug can be launched. So it will likely be years before any potential commercialization.

But because the AI identified compounds that are optimized for the therapeutic target, there should be less trial and error in the clinical trials. That will speed up the FDA process significantly.

As I predicted late last year, this is going to become the new norm for drug discovery. The time it takes a drug to get from discovery to human clinical trials and then to FDA approval is going to shrink dramatically. That’s great news for patients needing treatment. And it is also going to reduce drug prices significantly.

So once again, technology will prove to be the best solution to one of society’s most pressing problems.

Tech investors should add this AI startup to their watchlist…

An early stage company called Covariant just came out of stealth mode. Covariant is applying AI to robotics. And it’s set to upend the logistics industry.

Covariant’s first product is a robotic arm designed to pick up and sort products in a warehouse. Covariant is starting there because this is one of the hardest jobs in the industry to fill. It’s monotonous work that requires humans to be on their feet doing manual labor all day.

Covariant’s robotic arm will replace the need for most human “pickers.” It is designed specifically to solve this labor shortage problem.

The arm itself may not appear that impressive. But what we have to understand is that this robotic arm is operating without direct human instruction. And all the while, it’s “learning” how to sort objects better.

And the progress Covariant has made is amazing. When it got started, the robotic arm could only pick up and sort 10–15% of the product pool correctly. Over the last year, it’s gotten the arm’s accuracy up to 95%. While not perfect, that’s more than good enough to launch a viable commercial product.

The remaining 5% consists of objects that are either fragile or oddly shaped. For now, warehouses will still need human pickers to handle those items. But the robotic arm can do the rest of the work 24 hours per day, 365 days per year. It will cut costs and increase efficiency tremendously.

I could see a company like Amazon – or any logistics facility that requires pick and sort tasks – deploying this technology.

Amazon ships an estimated five billion packages each year. Most of these packages are two-day, one-day, or even same-day shipping. To keep up with this blistering pace, Amazon increasingly relies on advanced robotics for its logistics needs.

So if we enjoy receiving our deliveries in days or even hours, this robotic arm should be a welcome sight.

And the robotic arm will create jobs for management, engineering, maintenance, and repair. It will replace the undesirable picker jobs with higher-paying, less physically strenuous work. That’s a trend we’ll see more of as AI and robotics gain steam this year.

So Covariant is a company we eventually want to own. We don’t know yet if it will make it to an initial public offering or will be acquired while private. But this is absolutely a company to watch.