This week, if you’ll indulge me, I’d like to share some personal experiences. And if you’re just reading The Bleeding Edge for the tech, no problem – feel free to skip to my technology insights below.

How we spend our free time and with whom we spend it are very personal questions. And while I tend to work too much, when I do go out to “play,” I definitely like to have fun.

Jeff Brown at Circuit of the Americas 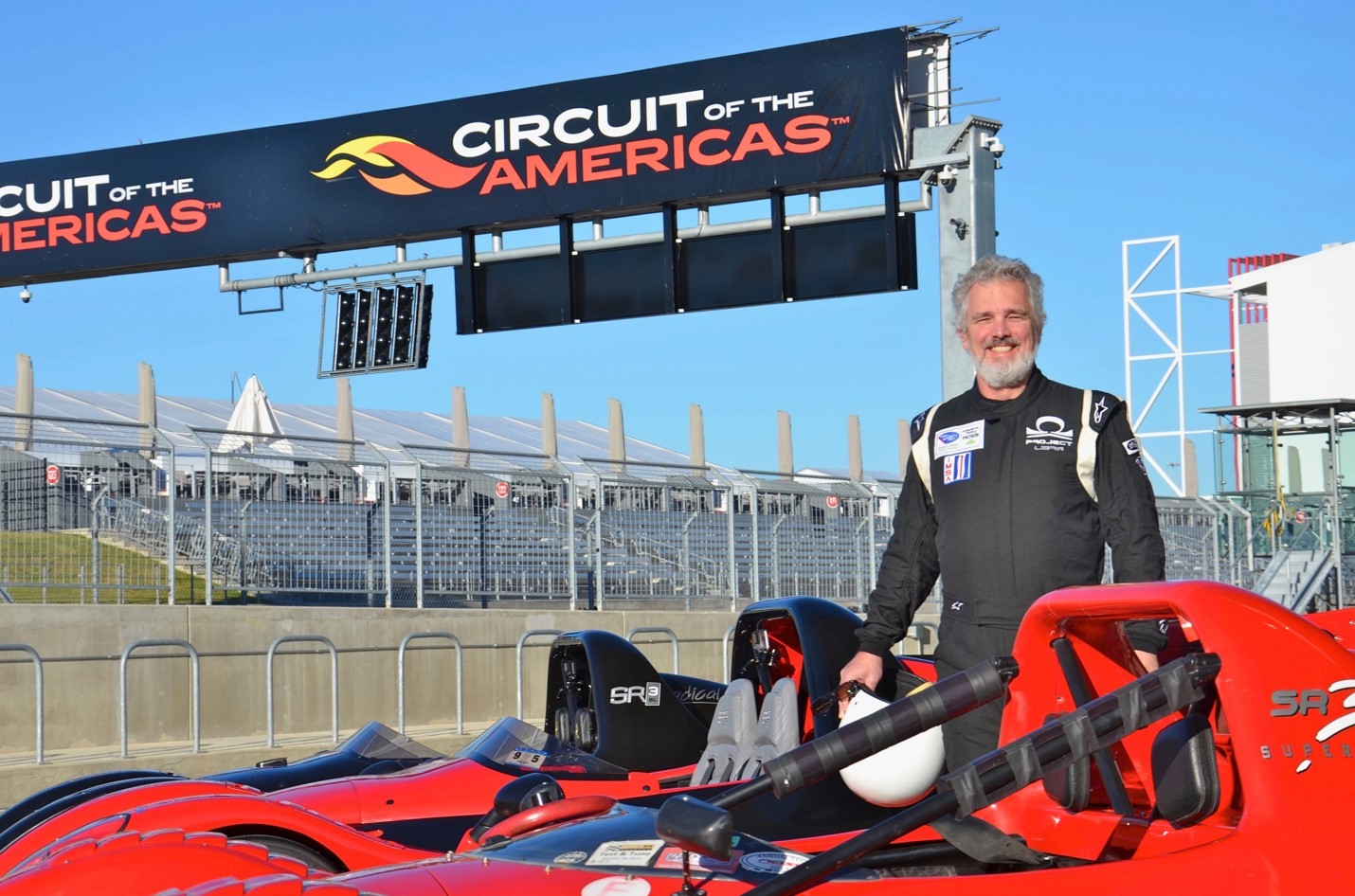 Last week, a group of friends rented out the Circuit of the Americas in Austin, Texas, for the day to drive Radical cars around the F1 track. In fact, we were the last group to have access to the track before the F1 race… One of the F1 team’s cars had already arrived.

I like to drive. And I appreciate a finely engineered car. I like to feel the road, tight suspension, acceleration, and stop-on-a-dime breaks. Designed to be similar to F1 cars, the Radical cars didn’t disappoint. While they don’t quite reach the speeds of an F1 car, it doesn’t matter much around an F1 track. After all, there is only one major straightaway.

Austin’s F1 track is challenging. Drivers are so close to the ground that elevation changes affect line of sight. Some tricky elevations make it impossible to see what’s ahead. I had to memorize certain turns in the track.

There’s nothing like the thrill of drifting around a sharp turn at 100 miles an hour. I’m not saying it was safe, though. One of my friends took a turn a bit too fast and ended up smashing into a wall. Fortunately, he was uninjured… But I can’t say that for the car he was driving.

And now for our tech insights…

Our bleeding-edge genetic editing technology, CRISPR, continues to show tremendous versatility in its therapeutic applications. Scientists in South Korea just demonstrated how CRISPR can be used for weight loss…

Obesity is one of the biggest problems facing the developed world. It is also an area where little progress has been made in terms of nonsurgical solutions.

Well, CRISPR is going to change that.

As I have mentioned before, I see CRISPR like a software editing platform for DNA. It can “edit” or correct unhealthy mutations in the DNA of plants, animals, and humans. And a team at the Institute for Bioengineering and Biopharmaceutical Research at Hanyang University in Seoul just applied it to obesity. Here’s how…

The team used CRISPR to target a particular tissue in mice with Type 2 diabetes. Type 2 diabetes is primarily the result of unnecessarily high caloric intake and lack of exercise. It accounts for 90% of all cases of diabetes.

The scientists injected the mice with a CRISPR-based therapy. And get this… On average, the mice lost about 20% of their body weight and experienced reduced inflammation.

So this means that CRISPR could one day be used as a weight-loss solution.

Think about it… How many people would line up at their doctor’s office to receive a shot that helps them lose weight? No need for diet or exercise… just a shot to lose weight.

While a healthy diet and regular exercise are strongly preferable, I suspect sadly that most would line up around the corner for the shot.

And a company that developed a CRISPR-based therapy for human weight loss would be worth billions overnight.

I’ve said investing in the best CRISPR companies is a once-in-a-generation opportunity. This is just one more bit of evidence. We’ve already more than tripled our money with one early stage CRISPR company in my small-cap investing service, Exponential Tech Investor (paid-up subscribers can catch up here). And these are still early days…

PricewaterhouseCoopers (PwC) – one of the four largest accounting firms in the world– just announced that it will accept cryptocurrency payments.

The fact that a traditional firm like this is willing to accept cryptocurrency is big news. This tells us that large corporations are figuring out how to deal with digital assets as a means of conducting business.

It is also an indication of how valuable the cryptocurrency industry has become. PwC’s flexibility in receiving payments in cryptocurrencies indicates that it wants to be seen as easy to do business with. It is targeting the blockchain industry for growing its own business.

Why is this important? Blockchain technology companies often raise money via initial coin offerings (ICOs). This means that they have a lot of capital in cryptocurrency, usually ether or bitcoin, after a successful ICO. It is simple for them to pay for services in cryptocurrency.

While ICOs have nearly ground to a halt in the U.S. market due to unwelcoming securities regulations, they continue to flourish internationally in many markets. Blockchain technology companies continue to raise billions of dollars annually through ICOs.

And the blockchain industry isn’t getting smaller. It’s certainly not going away. Blockchain will continue to grow in size and importance. Accepting cryptocurrency as payment is a great way to attract clients in this industry.

Ultimately, this move by PwC is an indication that we are moving toward widespread adoption.

Even for crypto novices, owning top cryptocurrencies like bitcoin and ether is a good way to gain long-term exposure to this trend. And these digital assets can be easily purchased through exchanges like Coinbase.

Amazon is now a top player in the TV business…

Amazon just made some major announcements at the Internationale Funkausstellung (IFA) 2019 consumer electronics conference in Berlin. This is the European equivalent to the Consumer Electronics Show (CES) held in Las Vegas every January.

At the show, Amazon announced more than 20 new Fire TV-branded devices… including a next-generation Fire TV Cube. This is a small device that delivers Amazon streaming services right to a TV.

And what’s special about the second-generation Fire TV Cube is that it is hands-free… It allows users to control their TV using voice commands. It’s like an Alexa for TV. I expect this to be a very successful product for Amazon.

Amazon also announced an impressive lineup of OLED Fire TVs. These are smart TVs with Amazon services built right in.

This begs the question… Is there anything Amazon can’t do well?

Most people still think of Amazon as just an e-commerce site. But it is now delivering some of the most advanced products in the television business today.

And Amazon now has 37 million monthly active users for its streaming TV services. That’s more than Roku, which only has 30.5 million. What’s amazing is that TV services are Roku’s core business. Amazon is beating it at its own game.

The key to Amazon’s success is to make consumers’ lives simple. Amazon is wrapping around the things that are integral to customers’ daily lives like online shopping… grocery purchases… smart home automation, and now television.

By doing so, it can drive an increasing amount of consumer purchases of both products and services month in and month out.

That’s why Amazon remains one of my favorite large-cap technology stocks to own long term.