Last week’s slowdown of COVID-19 cases was nothing more than a brief respite. The last three days have not been good.

The outbreak in South Korea has spread to more than 800 people. And Italy now has more than 200 cases and five deaths. As a result, Italy has quarantined 11 cities. Residents are not permitted to leave.

Major industry conferences continue to be a bellwether for how significant the impact is on global trade. This week, one of the largest annual cybersecurity conferences, the RSA Conference, takes place in San Francisco. I will not be attending.

Neither will many tech companies… As of last night, 14 major tech companies have already pulled out. This risk is simply too high with such a large contingent of attendees visiting from Asia.

Imagine the toll on a company if an outbreak happened among its employees. The worst part is that there is a two-week incubation period for COVID-19. The impact on an organization is delayed. This makes the potential impact that much worse.

It is no surprise that people are avoiding travel to events with a large population of international travelers.

And the latest developments appear to be having an impact on the markets. As I write this, the Nasdaq is down 3%.

Somewhat incredibly, more than 80 clinical trials are now running in China in search of a cure for COVID-19. It seems to be an act of desperation, simply throwing any compound that has a remote chance of working at the wall to see if anything sticks.

The World Health Organization (WHO) has been scrambling to help in hopes of implementing a structured protocol, so that the data coming back from the trials is high quality, trustworthy, and analytical… and hopefully can be used to cure COVID-19.

After spending weeks analyzing companies that show promise for a cure of COVID-19, I chose a company that took a different approach…

This company analyzed the DNA of COVID-19, and within days, it designed a synthetic drug that can teach the human body how to attack and kill the virus. It will begin clinical trials for its cure for COVID-19 within the next few months.

If any readers are interested, my research is available in Exponential Tech Investor. To learn more about this investing service and another “must own” biotech company, you can sign up here.

I’ll continue to monitor this trend for readers. But for now, let’s turn to our insights…

The WHO estimates that 2.1 billion people across the globe don’t have access to clean drinking water. For our first insight, I’ve uncovered a technology that could tackle this massive problem.

Research out of MIT just came up with a way to turn seawater into drinking water using solar power. This is done with a multistage system that removes the salt from seawater. That process is called desalination.

We have understood this process for many years now. But it hasn’t been prevalent because the conventional desalination process is inefficient. It uses a membrane technology that consumes a lot of energy.

The most efficient desalination plants have been built in Israel out of absolute necessity. About 60% of the country is a desert, and only about 17% is arable land. But this process still uses natural gas. That means it still releases massive amounts of carbon.

That’s why this new research is so important. Using solar power makes desalination much cheaper and completely clean. Here’s how it works…

The process uses nylon frames stacked on top of each other above a water reservoir (basically a big bucket). Each frame has a towel that acts as an evaporator and an aluminum film that acts as a condenser.

Solar power heats the device to evaporate the water. The water vapor filters through the layers of towels, separating salt from the water. Then the clean water condenses on the aluminum film and is channeled into a clean water reservoir.

What’s impressive is that this system can produce nearly six liters of drinking water per hour when it is sunny. That’s more than two times the amount that conventional desalination technology can produce. This process works on cloudy days as well, though at a lower efficiency.

And the system is the size of a medium-sized cardboard box that we can hold in our hands.

Simply put, this is a game changer if it can be done at scale. I believe it can. And countries like Israel have the perfect climate for a technology like this… Israel is one of the sunniest countries in the world.

It’s just one more example of how technology has the potential to solve humanity’s biggest challenges.

And since we are talking about ecological activities…

The XPRIZE Foundation is hosting a $7.5 million challenge for the research team that can convert carbon dioxide (CO2) into a valuable product. Teams are judged on how much CO2 they can convert and the net value of the product.

This is a multiyear challenge that started in 2015. The third and final round is happening in June. Then, winners will be announced this fall.

Going through the competitors, one team caught my eye. A group from the University of California, Los Angeles (UCLA), created a system that uses CO2 waste from industrial plants to make concrete blocks.

The team discovered a way to capture CO2 and then use 3D printing to craft the gas into a new building material. The team calls it “CO2Concrete.”

Concrete Block Made From Carbon Capture 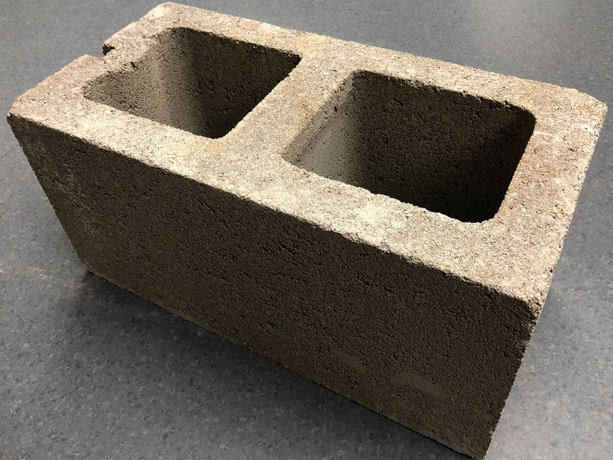 It looks just like a normal concrete block. The team takes the flue gas from an industrial plant and mineralizes the CO2 into the concrete blocks, which are then ready for construction.

Concrete is used in construction all over the world. It’s a massive multitrillion-dollar market. Yet producing concrete generates 8% of all global carbon dioxide emissions.

So if this team from UCLA can transform CO2 emissions from industry into concrete blocks for construction, it will reduce CO2 output from both the power plants and the concrete industry simultaneously. That’s a major reduction in pollution.

And, of course, this would revolutionize the industry. Making concrete from CO2 waste will be far cheaper than the conventional method, which heats up limestone and other materials.

This is big news – VISA just granted digital asset exchange Coinbase something called “principal membership.” It is the first time VISA has done this for a cryptocurrency company.

Principal membership allows companies to issue their own VISA debit cards. This is common among banks. If we look at our own debit or credit cards, we probably have at least one VISA card. When we use the card, VISA facilitates the transaction, and money is deducted from our bank accounts.

Well, Coinbase debit cards will work the same exact way. And that means people who have Coinbase accounts can use their cryptocurrency to buy anything they want.

Coffee… dinner… groceries… you name it. Coinbase users can swipe their debit cards, and cryptocurrency will be deducted from their Coinbase accounts.

On the other side, merchants will receive their chosen currency. Coinbase converts the digital assets into fiat currency and settles with VISA, and VISA provides fiat currency to the merchant.

This will help improve cryptocurrency adoption. It simplifies both the process and the concept. Neither consumers nor merchants have to change the way they transact. Coinbase takes care of the digital-to-fiat conversions, and Coinbase accounts can now function just like bank accounts.

Companies that don’t have principal membership have to use another third party (typically a bank) to issue the card… This increases the fee structure.

But now Coinbase doesn’t have to rely on another banking institution to issue a debit card. And this is even more important in the world of digital assets, where there is a cost to converting digital assets into fiat currency and vice versa.

Coinbase plans to issue debit cards in the United Kingdom first and then move into 29 more countries across Europe later this year. And there’s a big reason why it is starting in Europe and not the U.S. – the regulatory environment.

This regulation is so onerous. And it is nearly impossible for a consumer to track.

This makes using cryptocurrency in the U.S. impractical for daily purchases. It’s just not reasonable to track capital gains taxes on each transaction throughout the day.

Europeans don’t have this problem. And that’s why Coinbase will start there.

Longtime readers know I’m an active member of the Chamber of Digital Commerce. This is an advocacy group for the blockchain industry. And I’m on record saying that onerous regulations are one of the biggest roadblocks facing the industry today.

If the U.S. improves and simplifies its regulations for digital assets, I’m sure Coinbase would immediately launch debit cards for Americans as well.