As I told you yesterday, I’m sharing some personal stories of my recent trips. While I tend to work a lot, when I do go out to “play,” I definitely have fun.

Our next adventure this week takes us to Patagonia, where I had the trip of a lifetime with friends. We spent more than a week exploring both the Chilean and Argentinian parts of Patagonia. The region is truly one of the most beautiful places on Earth.

The picture below is me in Argentina having a blast on the longest zipline course in South America. The backdrop was spectacular… Even a picture can’t do it justice. And while the picture doesn’t show it, I was a few hundred feet above any solid ground. 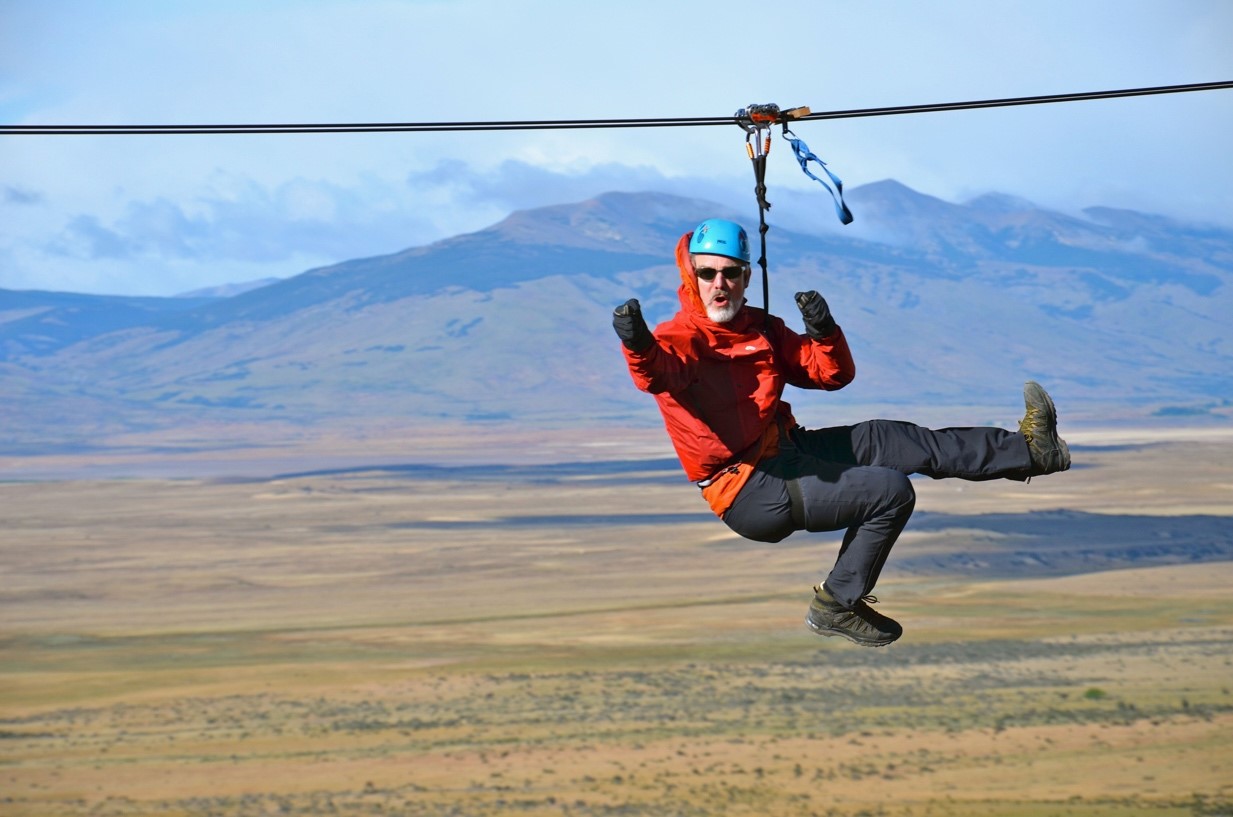 Not far from that location is the Perito Moreno Glacier, which is also a sight to behold. We’ll rarely ever read about this, but Perito Moreno is actually growing, not shrinking, and the reason for this is quite a debate among climatologists.

We were there when the weather was relatively warm and were fortunate enough to witness skyscraper-sized blocks of ice calving off the glacier. It was unbelievable. The scale is hard to comprehend even when you see it happening.

On the Chilean side, I had one of my most memorable days in the famous Torres del Paine National Park. We spent an entire day hiking to see the three towers – three massive granite formations with a glacial lake in front of them.

That’s enough of my adventure stories for now. Let’s turn to our insights…

How to reverse aging…

Last week, we discussed how researchers reversed the neurological aging of rats. But reverse aging isn’t just for rats.

Get this… A clinical study out of California just reversed aging in humans. People got younger.

In the study, volunteers took a cocktail of three drugs for one year. The cocktail consisted of one growth hormone and two diabetes medications. It was a relatively simple mix.

And on average, the patients lost 2.5 years of age in those 12 months. That was determined by analyzing each patient’s genome. The patients’ “epigenetic clocks” – an age measurement based on DNA – got 2.5 years younger.

The trial was small – only nine people – but the implications are astounding. We now know that it is possible to reverse the aging process. That opens the door to a wealth of new opportunities in the medical field.

And the potential is mind-blowing…

These patients shed 2.5 years of age with a simple mix of three drugs. The therapy wasn’t even personalized or designed specifically for each volunteer’s genetic makeup. Just think about what could be possible with a more advanced, targeted therapy.

We are one step closer to living well beyond 100… in sporting fashion. Imagine living well into our hundreds without all the struggles that come with getting old. We are talking about active, productive lifestyles that are enjoyable.

Welcome to the bleeding edge…

This is a major advancement in AI – and not only because Aristo demonstrated superb knowledge of science. Think about this…

And as we know, these tests often have tricky language. It is sometimes hard for humans to understand the questions.

So the fact that Aristo performed so well demonstrates its natural language processing ability. It proved that it can analyze complex human language and come up with a logical response.

This has major implications…

For one, Aristo will learn much faster than a normal human. It will likely pass college-level tests within a year’s time.

If we extend our thinking a bit further, we can see that AIs will be able to become subject matter experts in specific fields of science. Every scientific discipline will have an AI that is “trained” on all available research and data associated with that specific field. And these AIs will become a repository for all our scientific knowledge.

This technology will help researchers make even faster advances in all disciplines of science and engineering. It will help us find areas of research that present opportunities for advancement and troubleshoot areas where we are stuck. Contrary to what many fear, AIs will help augment human development, not replace it.

YouTube, which is owned by Google, was just fined for breaking the Children’s Online Privacy Protection Act (COPPA)…

COPPA requires websites targeting children to clearly disclose their data practices and get parental consent for collecting data on children under age 13.

As it turns out, YouTube was boasting about its ability to target and track children in its sales meetings with corporations as it sought to increase its own advertising revenues. According to the Federal Trade Commission (FTC), “YouTube touted its popularity with children to prospective corporate clients.”

That’s right. YouTube used Google’s infamous data surveillance techniques on children. It monitored, tracked, and served targeted ads to kids… for the explicit purpose of turning a profit. And it was brazen enough to pitch its ability to do so to corporations.

Yet YouTube publicly refused to acknowledge that its platform was directed toward children. That is a clear violation of the law.

As a result, Google agreed to a $170 million settlement. It will pay $136 million to the FTC and $34 million to New York State. This is one of the largest privacy settlements in U.S. history.

Sadly, however, the penalty is a joke. Google’s executives won’t bat an eye at $170 million. That’s because the company is sitting on $121 billion in cash and short-term investments. A mere $170 million isn’t even a blip on the radar.

But this is just more evidence that we shouldn’t trust Google… especially not where our children are involved.

YouTube is the digital equivalent of an unmarked white van roaming the neighborhood and offering free candy… not to be trusted.