Welcome to our first mailbag edition of The Bleeding Edge in 2020. As longtime readers know, this is when I answer your questions about the biggest trends in technology.

Is T-Mobile launching a “slower” 5G?

Jeff, you’ve probably seen the T-Mobile commercials in which the company asserts that its 5G can project miles whereas its competitors can only project a few blocks at most. My initial reaction to this is that this claim is based on T-Mobile using a slower form of 5G.

Is T-Mobile planning to use a slower form of 5G, and will this form be used mainly in suburban and rural areas, or will it be throughout the system?

Thanks in advance for addressing this.

Thanks for writing in, Billy. Always happy to answer reader questions when I can. Your question is a good one to kick off the year, as there is a lot of nuance in the answer.

And I’m sure you’re not the only reader who’s been seeing commercials for 5G services from the likes of T-Mobile, Verizon, and AT&T. I’ve been covering 5G for my readers since all the way back in March 2017. And now, 5G is getting very “real.”

The short answer is yes and no. How’s that for clarity? But joking aside, the answer really depends on the time frame.

T-Mobile’s rollout strategy takes advantage of its lower radio frequency (RF) spectrum in the ultrahigh frequency (UHF) band. This does provide miles of coverage for each base station compared to the higher RF frequencies that will also be used for 5G services.

Those higher RF frequencies are what will require the small cell network architecture in order to deliver the 1 gigabit per second (Gbps) speeds that 5G will enable.

Using the lower RF frequency bands, T-Mobile will be able to cover a larger percentage of the U.S. population in a shorter period of time.

The architecture used in this approach is similar to 4G wireless technology. It will enable T-Mobile to roll the network out quicker. Less new infrastructure is required.

The downside to this approach is that T-Mobile will not be able to deliver the 1 Gbps speeds at first. 100 megabits per second (Mbps) speeds are far more likely (1/10th the speed).

But all things are relative. I’m lucky when I can get 10 Mbps speeds over my 4G network due to typical network congestion. If I could get 100 Mbps, I’d be thrilled. Most customers probably would be as well.

But over time, T-Mobile will still have to build out the rest of its 5G network, which will require the small cell architecture that needs so many small base stations. This will dramatically increase the capacity and speed of its 5G wireless network.

Why would T-Mobile go this route?

The reason is part marketing and part financial. From a marketing perspective, T-Mobile will be able to claim nationwide 5G coverage by the end of 2020.

From a financial perspective, it is much less expensive to build out the lower-speed 5G network in the UHF band than it is to take the approach of Verizon, which is building out the dense small cell architecture from the beginning.

I can understand why T-Mobile is doing this. It is dealing with its merger with Sprint and large debt loads.

It makes perfect sense for T-Mobile to take a “capital-light” approach to 5G in 2019 and 2020. And it is hoping that the 100 Mbps speeds with nationwide coverage will help it dramatically increase its customer base, thus improving its own financial position.

Assuming the T-Mobile/Sprint merger goes ahead, the three U.S. wireless operators will eventually build out full 5G wireless networks with the advanced speeds and nearly zero latency that 5G was designed to deliver.

How technology will feed the world…

Jeff, I enjoy your articles very much – and not just the recommendations, though they are profitable. However, in the recent article about quantum computers, you mentioned that even superbugs will have an antidote that will save lives.

BUT won’t the biggest problem that will face humanity before too long be the shortage of food? If the population of the world keeps increasing, people will be “standing” on an increasing amount of physical “land” – usually the best agricultural land. How will they be fed?

Thanks for writing in, Lester. I’m glad to hear you’re enjoying the research. This is a very common question. And it’s something that people have been worrying about for decades.

William Vogt, an ecologist born in 1902, believed that if the world’s population continued to grow and consume at the pace expected, there would be devastation on a global scale. He forecast mass starvations that would cause the deaths of untold hundreds of millions.

A follower of Vogt, Paul Ehrlich, forecast that life expectancy in the U.S. would fall to 42 years of age by 1980 due to the use of pesticides. Vogt founded a movement referred to as “apocalyptic environmentalism.” It was based on creating fear, uncertainty, and doubt.

His desired “solution” to population growth was to limit it. Vogt was a strong advocate of population control.

But as we know, none of that happened. In fact, rates of famine declined sharply in the years following these apocalyptic predictions. Ehrlich’s beliefs were deeply flawed and ridiculously wrong.

And the reason was simple. Technology – again – solved one of humanity’s most pressing challenges… a looming food shortage.

During the mid-20th century, an agronomist named Norman Borlaug developed a type of high-yielding, disease-resistant wheat.

And as we can see by the rapid decline in famine rates since the 1960s, Borlaug’s achievement was an incredible success. He won the Nobel Peace Prize in 1970. 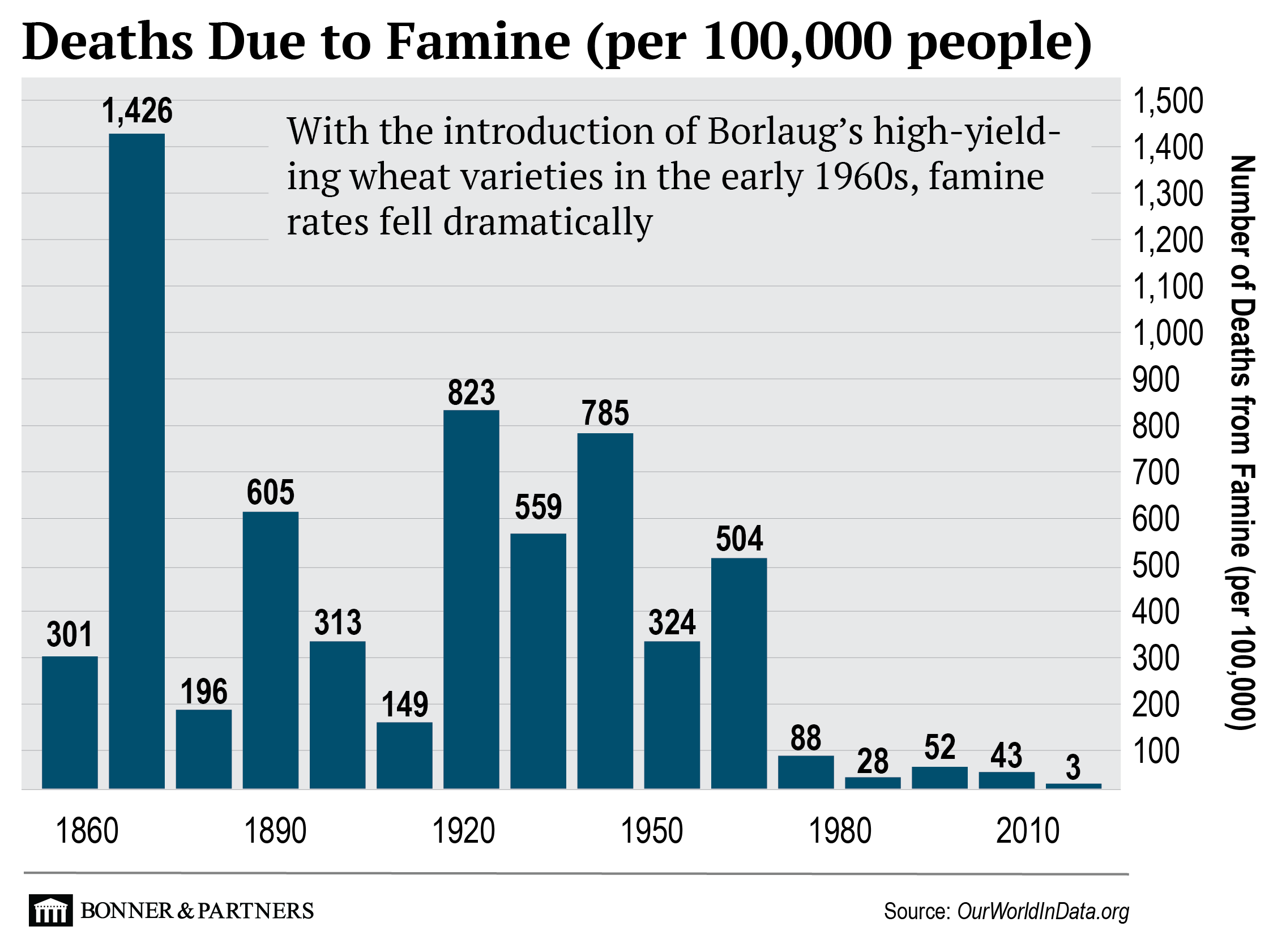 If you’re interested in learning more about the history between the two different perspectives, there is a great book on the subject. The Wizard and the Prophet by Charles C. Mann is a fascinating read.

And innovation around agriculture continues to this day…

Last year, I profiled early stage company Root AI. This is a company spun out of MIT in 2018. It specializes in using AI and robotics to only pick produce – in this case, tomatoes – that is optimally ripe. In doing so, Root AI ensures no food is wasted by being harvested prematurely.

And we are creating improved crops by using genetic editing technology to make them more drought-resistant, have longer shelf lives, and produce higher yields.

Furthermore, one of the hottest technology trends in agriculture right now is “vertical farming.” The movement aims to move farms and fields close to urban centers – and, in many cases, locate them in the cities.

We can imagine highly automated, robotics-enabled food “manufacturing” plants that grow healthy foods for urban areas at even cheaper prices.

We’re going to see more of this in the next couple of years. And there is a side benefit, too. These types of agricultural facilities consume less water and energy than traditional farming per unit of agricultural output.

While we will see these kinds of vertical farms in the U.S., the largest markets for this agricultural technology will be in Asia, where the population densities are the highest.

Will quantum computing “steal” the 2020 election?

You mentioned only a few large corporations controlling quantum computers at the moment – Google being one of them, and I’m guessing other left-leaning Silicon Valley-ites. Therefore, what do you think of a breach of the 2020 election taking place as the left’s last chance to eliminate Trump? As the impeachment garbage circles the drain and other desperate attempts fail, this is my prediction for 2020.

Thanks for writing in, Gary.

Just to catch new readers up, the other week, I predicted that 2020 would be the year we will see the first 256-qubit quantum computer.

This will be a large jump up from the 53-qubit quantum computer at Google that achieved quantum supremacy.

This next jump in quantum computing power is significant because a 256-qubit quantum computer could crack so-called military-grade encryption in a matter of seconds. It could cause panic for corporations and governments that need to secure sensitive information.

But I’m not too worried that this technology will be used to interfere in the 2020 elections. These are still early days for quantum computing, and the usage of these systems is tightly controlled and monitored.

Equally important, they can only be used for a limited set of problem-solving. In future years, we’ll be able to apply the technology to much broader use cases.

Yes, Google, Facebook, and other outlets will continue to covertly attempt to influence election outcomes, precisely as they have been doing for so many years.

It is, however, getting more difficult to do so, as leaks of these manipulating tactics have become well known. And politicians and regulators have placed these companies in a very difficult position.

The larger risk of election interference will likely again come from countries like Russia and China. These countries are looking for a weaker, more pliable U.S. president with regard to trade negotiations and foreign handouts.

The importance of being able to verify information sources and having ways to validate and confirm information has become more critical than ever before. And this is a problem that the latest technology is well suited to solve.

While there will certainly be a lot of fake news again in 2020, I am optimistic that it will be more difficult to influence outcomes with false information compared to 2016. The U.S. understands the extent of what happened in 2016 and is much better prepared to deal with this issue in 2020.