The numbers are coming in… And they’re impressive.

Online sales on Black Friday, the biggest shopping day of the year in the U.S., rose nearly 20% to $7.4 billion compared to last year.

And current forecasts for today, Cyber Monday, are equally impressive. A 19% jump from last year to an even more impressive number, $9.4 billion, is forecast.

I’m not surprised a bit to see these kinds of numbers in such a strong economic environment. This is great news for equity markets. We’ll have the details on where the day finishes up in tomorrow’s Bleeding Edge.

The way companies go public could be changing…

The New York Stock Exchange (NYSE) just filed a proposal to allow companies to go public with a direct listing and sell new shares to raise capital at the same time. This is big. Such a move could make the NYSE more popular with tech companies than the Nasdaq. Here’s why…

As we discussed back in June, traditional IPOs flow through investment banks. The banks shop the IPO to large institutional investors to determine market demand for shares. And for their work, the banks collect roughly 7% of the total sale.

What’s more, it is very expensive and time-consuming simply to file for an IPO… before even dealing with the banks. Typically, a company will pay over $10 million in fees from initial filing to the day the IPO closes.

So it’s not at all an attractive process. And behind closed doors, many tech executives will tell you they loathe the IPO process. They especially dislike that a few investment banks control the process. Some would even say manipulate…

By comparison, a direct listing cuts out the banks and slashes the fees to a fraction of the cost. That’s because with a direct listing, the company just lists its existing shares for trading. This is the route Spotify and Slack took.

But the problem with direct listings right now is that there is no mechanism to raise new capital at the time of the listing. Direct listings don’t offer new shares. They simply allow existing investors to sell their existing shares on an exchange.

For this reason, most tech companies can’t afford to do a direct listing. Very few have balance sheets full of cash. Most need to raise more money to finance growth.

That’s why this is such an interesting move by the NYSE. If it allows companies to do a direct listing and sell new shares to the public, the exchange is going to see strong interest from high-growth private tech companies.

Plus, private investors and venture capital firms will benefit as well because there is no lock-up period with direct listings. In comparison, these private investors are restricted from selling their shares for six months with a traditional IPO.

The only group that probably doesn’t like this development is the investment banks. They’re going to be cut out of the process altogether. If you ask me, that’s for the benefit of both private companies and investors.

With this process, more technology companies can easily come to the public markets. And that means more investment opportunities for investors.

The Securities and Exchange Commission is reviewing the proposal right now. We’ll keep a close eye on how it progresses.

And as always, we’ll be the first to let you know how it turns out.

JPMorgan has found a niche application for blockchain…

I don’t often compliment large, legacy incumbents, but I must give JPMorgan a tip of the cap today. The company just filed a patent demonstrating a blockchain application for floorplan lending.

Floorplan lending is an auto industry term. It’s basically a line of credit that allows car dealers to borrow against the inventory they have on the lot. This is how car dealers maintain liquidity with such high inventory costs.

Of course, the problem with floorplan lending is that it is hard for lenders to audit the dealers. It’s hard for them to know what cars are on the lot at any given time. In fact, these audits are done in person right now. The lenders send somebody out to count the cars and report back.

Obviously, that’s a time consuming and expensive way to do it. And it doesn’t work well because they can only send out the auditor every so often.

Sadly, this creates a situation where it is easy for car dealers to pledge the same cars as collateral with different lenders. That’s fraud… But it happens more often than it should.

Every car has both a unique VIN number and a GPS locator in it. By placing this data on a private blockchain, the cars can be tracked in real time. That way the lender always knows what, and where, its collateral is.

And because the blockchain would act as a source of truth for the lenders, they can confirm, in real time, that car dealers aren’t double-counting their cars.

So this is an elegant solution to a highly inefficient problem. And it’s a perfect application for a private permissioned network run by a company or group of companies.

Now, why would JPMorgan be tackling this problem?

Easy – the firm has a massive wholesale car financing arm. It’s a big business for it. So by implementing this blockchain system, it can reduce its overall lending risk and increase profitability.

As my longtime readers know, I believe blockchain will be a disruptive force of innovation and wealth creation…

Spot the robotic dog has found a home…

We talked about Spot back in September. Spot is a “doglike” robot that has a wide range of functionality. It can go up and downstairs. It can carry objects around. And it can even open doors with its robotic arm. 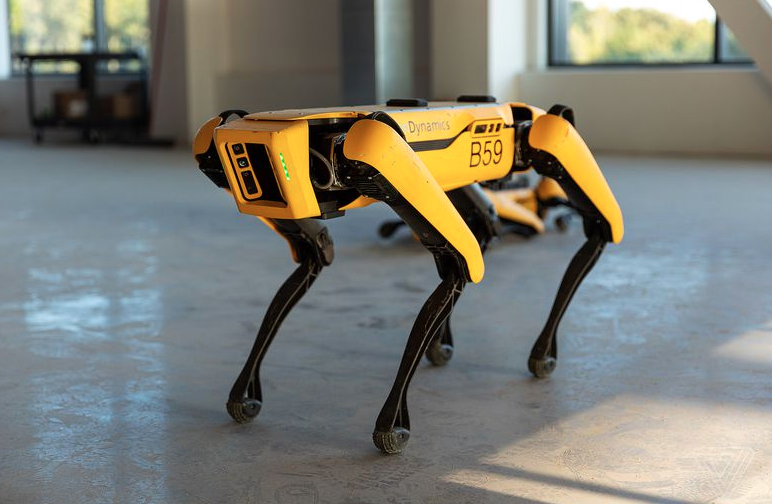 Boston Dynamics is the company that developed Spot. This is an interesting robotics company that’s been around for decades. It was spun out of the Massachusetts Institute of Technology (MIT) way back in 1992.

And it turns out the Massachusetts State Police has taken an interest in the company’s robotic dog. Word is out that the police department has been testing Spot in the field. The police are most interested in Spot’s ability to inspect potentially dangerous environments, especially in bomb situations.

And it makes perfect sense. Spot is equipped with a camera that allows the police to inspect the scene from a safe location. Plus, Spot’s robotic arm can open doors and even inspect certain objects in the field.

This is a perfectly logical application for advanced robotics technology like Spot. This is starting in Massachusetts, where Boston Dynamics is headquartered, but I would not be surprised if we soon see police departments around the country and the world using Spot.

Spot will also have other applications. One company that might have use for Spot is Amazon. As we know, Amazon has massive warehouses where it packages and ships goods purchased on its e-commerce platform.

Could you imagine Spot carrying packages to shipping trucks? Or perhaps the robot dog could fetch shipping items for its human handlers? Or even help deliver packages from a truck to a customer’s doorstep?