At 5 a.m. this morning, the estimate for unemployment applications in the U.S. stood at 3.1 million. By 9:14, the real numbers came in… an astounding 6.6 million Americans filed for unemployment.

Talk about being way off…

One economist from consulting firm KPMG is now forecasting that the total number of unemployment filings will reach 20 million in the coming weeks.

It is absolutely gut-wrenching to see friends, family, and colleagues being furloughed or laid off. This is a once-in-a-generation event.

A month ago, we knew this wave of job losses was coming, but we didn’t know how bad it would be. What a difference just four weeks make.

Here’s why I’m optimistic, though.

I expect we’re going to see the peak of the outbreak within the next few weeks. No more than 45 days from my estimates – and likely within 30 days.

And in the northern hemisphere, I predict we are going to be back to work by the end of May or early June. And while it is going to be a bit weird, with modified “physical distancing” behaviors, things are going to spring back quickly. And that means a lot of rehiring.

I’ve also been keeping a close eye on the private capital markets. This provides a unique lens into the outlook of the future U.S. economy and the belief in an overall market recovery. And what I’m seeing is positive.

These are two firms that I follow closely in my Early Stage Trader research service. I track the investments that these companies make from their earliest stage of funding, carefully monitor progress, and look for the best of breed to go public.

Imagine raising $2.5 billion near the peak of panic and fear. That strongly signals a positive outlook.

Tech stocks will spring back quickly. Cloud-based software services have become a matter of national importance for most countries. Without them, the global economy would simply collapse. We would not be able to work in a distributed or remote environment.

And communications networks like 5G have become more vital than ever before. As I showed recently, peak usage of wireless networks has shot up as high as 40% in recent weeks.

In short, the world needs 5G now more than ever. And yet, the best 5G stocks are still trading at a discount.

This is an extraordinary setup. And it won’t last forever. I want all my readers to take advantage of this. That’s why I’m hosting a free 5G investment summit on April 8 at 8 p.m. ET. Save your spot right here.

As a reminder, AR is a technology that overlays video, images, and data on top of the user’s actual surroundings. This can be done in a pair of glasses, windows, or smartphones and tablets.

What’s remarkable about Facebook’s deal with Plessey is that it is exclusive. Facebook is going to buy every AR display that Plessey can make. Every single one.

Talk about a flag. This is an obvious sign that Facebook is very close to launching a pair of AR glasses.

And this is an incredibly strategic move. The lens technology is the most important component of any pair of AR eyewear. It’s the hardest piece of the puzzle to get right. And Facebook just locked in an exclusive supply.

What’s more, Apple was looking at acquiring Plessey Semiconductors for this reason. Apple wanted the lens technology for its own AR ambitions.

Facebook beat it to the punch with this exclusive deal. That’s bad news for Apple and other companies working with Plessey.

So we can expect to see a big consumer-grade AR launch from Facebook within the next 12 months. That was my suspicion all along – this just confirms it.

The big question is – what does Apple do now? It certainly isn’t going to back away from its AR plans. So where will it get its lens technology?

My bet is on Magic Leap.

Regular readers will remember that I tested out Magic Leap’s glasses back in December. It was an extraordinary experience.

Readers may also remember that Magic Leap wants to sell itself. We talked about that a few weeks ago. At the time, I said Apple was among the most likely suitors.

And the move makes even more sense today than it did then. Magic Leap has its own lens technology and a leading-edge pair of consumer-grade AR glasses already developed. It would be a perfect fit within Apple’s umbrella.

The last known valuation of Magic Leap was almost $7 billion from its last funding round. And there are rumors that Magic Leap’s backers are looking for a $10 billion exit in a sale.

This is far larger than what Apple tends to acquire. It likes to make small acquisitions and tuck them quietly into the mothership. A large acquisition for Apple is in the hundreds of millions.

But Apple is sitting on $207 billion of cash, and it will likely generate about $65 billion in free cash flow this fiscal year.

And since Magic Leap generates very little revenue in sales, it is not a reach for Apple to step in here. The only question is whether it will move quickly enough.

Magic Leap must be a desirable asset to Microsoft, which has a history of grossly overspending on acquisitions to bolster its cloud services division.

Which one of the giants will strike the deal first?

The space race is back on…

Great news – the COVID-19 outbreak is not going to slow down the modern space race one bit.

I was excited to see that NASA plans to move forward with building the Lunar Gateway within the next 24 months. That’s right – within two years! This will be a second space station that orbits the Moon. 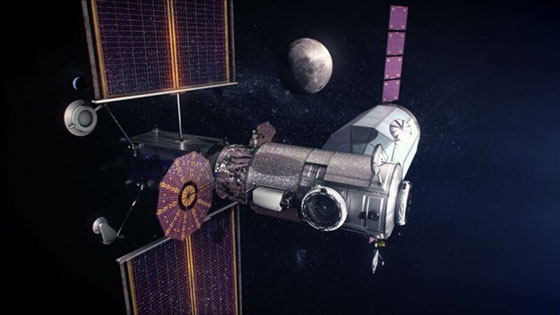 It’s great to see that we haven’t lost sight of our long-term extraterrestrial ambitions, despite all the COVID-19 chaos here on Earth.

The Lunar Gateway is a critical element to having a manned presence on the Moon. It will be a stopping point for people coming from Earth or the International Space Station.

And perhaps not surprisingly, NASA just announced that it awarded SpaceX a contract to support the project by hauling materials from Earth to the Gateway. After all, what other space tech company could move this quickly?

This is a big win for one of my favorite space tech companies.

SpaceX will use its Falcon Heavy booster and a modified version of its Dragon Capsule to make the treks between Earth and the Lunar Gateway. It will be able to move five tons of cargo at a time, which is quite impressive. It’s not easy getting heavy materials out of Earth’s orbit and to the Moon’s orbit.

And SpaceX is commissioned to supply the Lunar Gateway with NASA runs for as long as 12 years, with the option to extend at the end.

So this is a great deal for SpaceX. Recently, I wrote that SpaceX could be preparing for an IPO. This recent move is making that look like a real possibility.

This incredible news about the Gateway and SpaceX’s first launch of astronauts to the International Space Station (which could happen as early as this month) is setting things up for a potential public offering. At the right valuation, SpaceX would be an incredible investment.

I hate that we have to talk about this last item…

Remote videoconferencing company Zoom Video Communications (ZM) has been a big winner as the world moved to videoconferences instead of face-to-face meetings. My team and I use Zoom’s technology daily, and it’s a great product.

But the company just got hit with a lawsuit. It was discovered that the Zoom application was sending analytics data back to Facebook.

Zoom has been informing Facebook when users open the app. Zoom has also provided details like what device users were using, the time zone they were in, and which phone carrier they were with.

That’s right – Zoom was spying on its customers for Facebook. It turns out even people without a Facebook account are hard-pressed to escape the shady corporate giant’s purview.

I suspect that Zoom struck this deal early on when its revenues were much lower… but this is still inexcusable. And the fact that Zoom didn’t cease this practice once revenues ramped up is even worse.

I hope this is the catalyst it needs to clean its act up.

And if that wasn’t enough, it was just discovered that Zoom is not encrypting its video calls with end-to-end security. And this is contrary to what the company has told its investors and customers. Not good at all.

I’m sure that Zoom will get its act in order. These technical and business problems are things that can be solved quickly.

But for investment implications, I would not touch Zoom with a 50-foot pole at these valuation levels.

The stock has more than doubled this year thanks to the COVID-19 lockdown. And it now trades at an enterprise value (EV)-to-sales ratio of 64. That’s insane.

Anybody buying ZM is going to lose a fortune. The stock will tank when people find out that Zoom still doesn’t make even $1 billion per year, even with the increased business.

By the way, please note that Zoom’s ticker symbol is “ZM” – not “ZOOM.”

Comically, people have been piling into ZOOM, thinking it was Zoom Video Communications. That sent the share price soaring over 900% in just two months.

But ZOOM is the ticker for a mostly defunct Chinese company called Zoom Technologies. Best I can tell, this company hasn’t generated any revenue since 2011.

So I can offer some very important advice. We should always know what we are investing in. And please don’t buy either of the Zooms.

P.S. Don’t forget about my 5G investment summit next week. It will take place on April 8 at 8 p.m. ET.

Simply put, COVID-19 is wreaking havoc on the internet.

Peak usage on 4G wireless networks has jumped 20–40% just in the last several weeks. Videoconferencing traffic – for both work and socializing – has spiked 300%. Gaming traffic has exploded 400%… probably because the kids are staying home from school.

All this traffic is a massive drag on the networks. So much so that the European Union is even asking companies like Netflix, Disney+, Zoom, and Facebook to reduce the quality of their video.

And that’s why there’s an even more aggressive focus on the 5G build-out. President Trump went so far as to release a paper called “National Strategy to Secure 5G.”

In it, the president said that 5G will be a primary driver of our nation’s prosperity and security in the 21st century. He even said that this new technology will change the way we live, work, learn, and communicate.

I absolutely agree. In fact, I’ve been saying these exact things since I started pounding the table about 5G several years ago.

Yet there’s a major disconnect in the market right now.

As we know, the stock market has pulled back significantly on COVID-19 fears. Obviously, this makes perfect sense for hotels, airlines, cruise lines, and the other companies that will be devastated by the ongoing quarantine and social distancing.

But here’s the disconnect… the best 5G stocks in the world have pulled back with everything else. Yet these companies aren’t seeing business slow down as a result of the COVID-19 pandemic. On the contrary, their business is ramping up.

And that makes for an incredible investment opportunity.

That’s what my 5G investment summit is all about. We have an amazing investment window right now, and I want all my readers to take advantage of it.

So please join me at 8 p.m. ET on April 8. I’ll cover everything you need to know to turn this big disconnect into outstanding gains. Just go right here to reserve your spot.