U.S. jobless claims came in this morning at 2.44 million, down compared to last week’s 2.69 million. It is difficult to grasp how large these numbers are given that they are from just one week’s data. 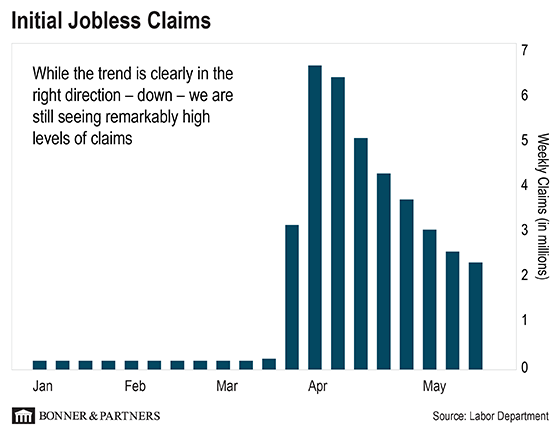 While the trend is clearly in the right direction – down – we are still seeing remarkably high levels despite lifting some restrictions in all 50 U.S. states. But the degree of reopening is varied.

Texas has gone so far as to open gyms and movie theaters. New York won’t even open the beaches for the Memorial Day holiday. One would think sunshine and fresh air would be a good idea.

We are also beginning to see the impact of the widespread unemployment on credit card and auto loan payments.

In April, about 15 million credit cardholders stopped payments on outstanding balances. And 3.5% of auto loan holders skipped payments. Last year this time, that number was just 0.5%.

While we’re seeing an increase in business activity around the world, the world needs to begin the process of rehiring as soon as possible for the real recovery to start.

I believe that we’re going to see a lot more stimulus soon to ensure that happens.

Now to our insights…

5G service to the home is here…

Verizon just put out an update on the progress it is making with its 5G wireless network. To date, the company has launched 5G in 34 cities across the country, and deployment has not slowed down at all despite the COVID-19 pandemic.

Verizon is set to launch 5G in San Diego next month, making it the 35th city, with many more to follow in the second half of the year.

And Verizon is now offering a fixed wireless access service that will deliver 5G right to the home.

This service uses a router that’s about the size of a home smart speaker like Alexa. The router connects to the local 5G network and hooks up to the home’s Wi-Fi network, just like a cable modem does. This will bring 5G speeds to all consumer devices in the home. 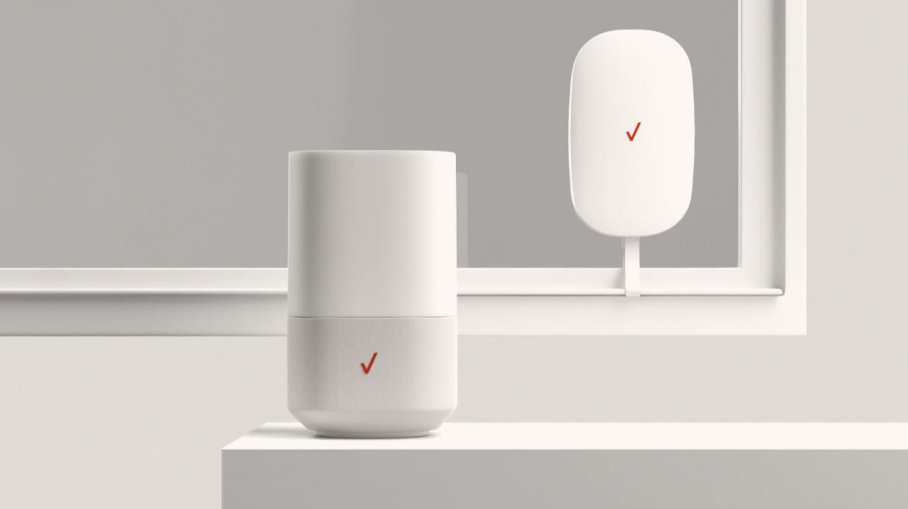 Wherever Verizon has 5G network coverage, it can offer this fixed 5G home internet service. And here’s why this is a big deal.

The average broadband internet speed in the U.S. is now 115 Mbps. As we know, 5G can deliver speeds over 1 Gbps. That’s nearly 10 times faster than what consumers have today.

Plus, the cable TV companies that provide internet access to many U.S. households are notorious for their poor customer service. According to the American Customer Satisfaction Index (ACSI), cable TV internet service providers were ranked dead last by customer satisfaction in 2019.

I’m sure many readers have had unpleasant experiences with their cable company. I know I have, but where I’m at right now, I have no choice in the matter.

Yet the cable companies have no problem raising prices on us without notice. My cable company told me, “We’re all in this together”… and then raised prices on me and millions of others by $15 per month in the middle of the pandemic.

I’m now paying more than $80 per month for what’s advertised as 300 Mbps internet speeds… but I have never come close to that level. I rarely can get over 200 Mbps. How’s that for service?

With its 5G offering, Verizon will deliver better internet at a better price with better customer service. I’m sure many consumers will jump at the chance to make the switch.

And for consumers who don’t have 5G locally yet, Verizon is working on technology that will allow its fixed wireless access devices to utilize both 4G and 5G. That way these devices will work on 4G right now, and then they can switch over to 5G when it becomes available. This will give consumers access to 5G as soon as it is ready in their area.

So this is exciting news. This is the first time that the U.S. market will have a nationwide service that can compete against local cable TV internet provider monopolies.

Interested readers can go to Verizon’s website and see if the 5G home offering will be available locally. I would love to hear feedback from anyone who gives it a try. Write to me by going here.

The daring revival of a dead dot-com company…

Here’s a blast from the past.

Readers may remember Borders Bookstore. Brothers Louis and Tom Borders founded it in 1971. Then, in 1992, Kmart bought Borders for about $190 million. Louis took his share of the money and launched a tech startup called Webvan, which went public at the height of the dot-com bubble in 1999.

Webvan was a home delivery service for groceries – a novel concept back in 1999.

Do you remember these trucks? 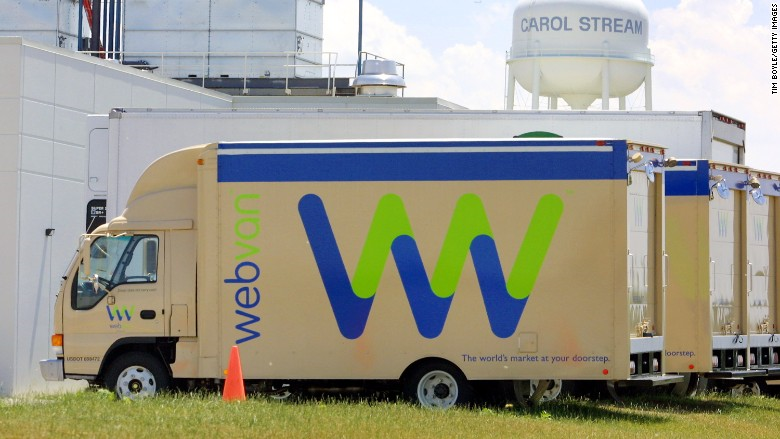 The company was worth $8 billion at the time of its IPO… then it collapsed.

The company lost $800 million in three years as a public company, finally filing bankruptcy in 2001. It was one of the biggest failures of the dot-com era.

Webvan’s main problem was how capital intensive it was. It didn’t have artificial intelligence (AI), robotics, or automation back then. Everything had to be done manually. It took a lot of employees to take grocery orders, fill the orders, and then deliver the orders to customers.

That’s why Webvan hemorrhaged so much money. Compare that to Instacart, which has no store or distribution facilities. And its “workers” aren’t employees.

Given how bad this venture was, one would think Louis Borders would have washed his hands of the home delivery business. But he hasn’t. Borders is bringing Webvan back to life after two decades in the grave.

His new venture, called Home Delivery Service, already raised $30 million and is looking to raise $25 million in the Series A round for Webvan 2.0. This time, Borders is going to use technology to make the business fully automated. AI, computer vision (CV), robotics, and automation will be on full display.

Home Delivery Service is planning on building distribution centers around the country, which will house the same food and goods we find on grocery store shelves. These will be like supermarkets, except with no people shuffling in and out.

Instead, orders will be received online, and robots will fulfill them. No humans will touch the products.

Thanks to this automation, Borders believes Home Delivery Service can fill online orders at half the expense as top competitors. And the company will be able to offer free delivery with no tipping expected. That’s a powerful model.

And Borders isn’t shy about his goal. He believes Home Delivery Service can beat Amazon and Walmart in this space. How’s that for chutzpah?

So this is going to be an exciting story to follow. Home Delivery Service will be a great case study in what a fully automated system can do.

And the company is swinging at a massive market.

Last year, Americans purchased roughly $700 billion worth of groceries. Of those purchases, only 3% were made online.

If Home Delivery Service can simply move that needle several percentage points higher, it will be looking at tens of billions in revenues. And given what we’ve just gone through with COVID-19, I fully expect that to happen.

So I’ll be rooting for Home Delivery Service. It’s doing precisely what an early stage company should do. It’s swinging for the fences.

And in a post-pandemic world, I think most of us would value having robots pick and pack our orders rather than strangers.

Big news – Apple Glasses are on the way.

That’s what Apple will likely call its augmented reality (AR) glasses. And why not? Apple Watch is now the most popular watch in the world. Apple Glasses could very well become the most popular glasses.

As a reminder, AR is a technology that overlays video, images, and data on top of the user’s actual surroundings. With Apple Glasses, we’ll see computer graphics right in our field of vision as we go about our day.

As for the news that has leaked out – Apple’s got the form factor right. Apple Glasses will look and feel like normal sunglasses. They won’t be big and bulky like early AR headsets. 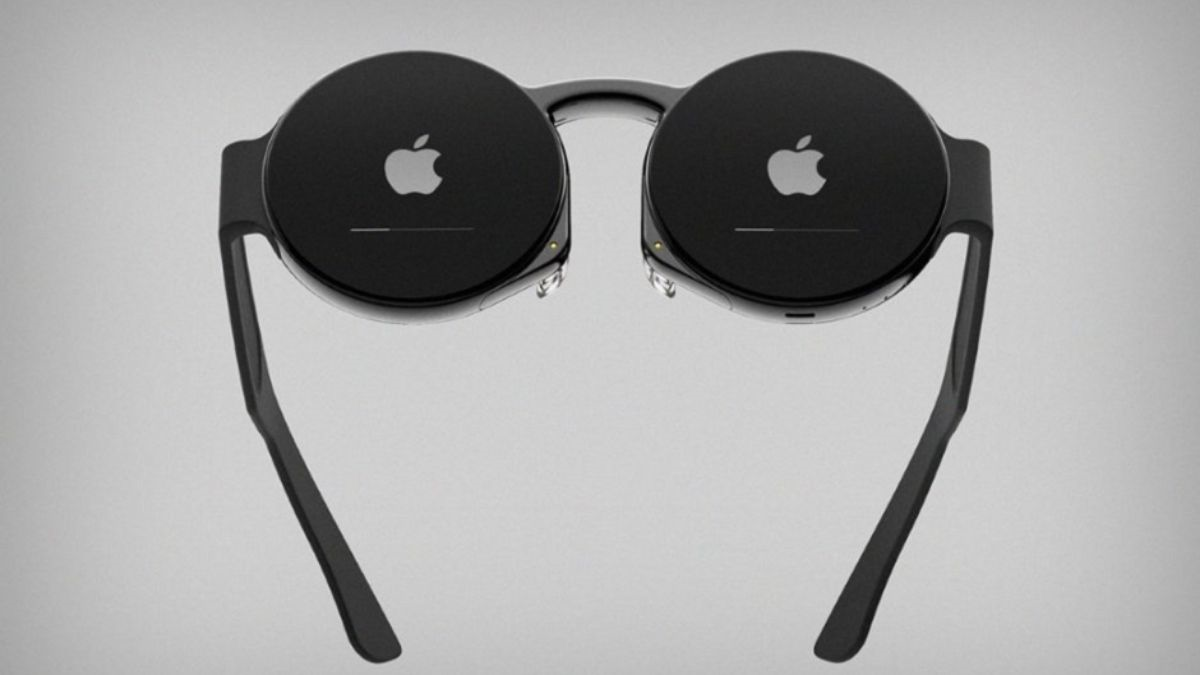 A big reason why Apple can get AR glasses down in size is that Apple is leaving out Wi-Fi connectivity altogether. It is using some of the most advanced and smallest semiconductors available.

I like this. By eliminating Wi-Fi connectivity, it saves space inside the design.

Apple’s approach to connectivity for the glasses is to enable them with 5G. Apple is planning on using the high-frequency spectrum that can deliver the fastest 5G speeds. The AR will be lightning fast. And this is telling…

With 5G integrated, Apple Glasses will be functional for consumers throughout the day. Compare that to Wi-Fi connectivity, which would require consumers to be in range of a Wi-Fi network to use the glasses.

This tells us that Apple thinks AR is going to be a big part of our lives. Apple envisions consumers wearing the glasses throughout the day – not just while they are sitting down at Starbucks on a coffee break.

Regular readers know that I share these views. I believe AR glasses will be the next mass-market consumer product. And I even think they will eventually replace our smartphones entirely.

So we are getting a lot closer to AR going mainstream. Apple Glasses will likely be a hot topic at Apple’s developer conference next month. Every June, Apple hosts its Worldwide Developers Conference (WWDC). That will pave the way for developers to begin working on applications for the glasses.

Looking forward, its likely Apple Glasses will launch next year, though there’s a small chance Apple could rush these out before 2020 is out – it’s still a secret how far along Apple is on the product development.

The software is developed and available for developers to work on it, but the status of the hardware has been the big question.

Either way, this is going to change the industry forever. I can’t wait to get my hands on a pair.

P.S. We’ll have to wait and see when Apple releases Apple Glasses. It will likely be next year. But there’s another Apple product that we know is set to launch this year: the 5G iPhone.

That’s right. Apple will sell hundreds of millions of 5G-enabled iPhones before 2020 is over. And each one of them needs a special component to connect to 5G. And I’ve found the one company that will supply that component.

For investors looking for exposure to 5G, this is it. This Apple supplier is my No. 1 large-cap 5G recommendation for 2020. And readers can learn all about it right here.