We’re in for another exciting week as the Federal Reserve is expected to announce another cut in the fed funds rate. The market seems to have priced in a 50-basis-point cut, while President Trump is asking for a full point (100 basis points).

The previous two cuts of 25 basis points each during the last few months have already had a notably positive impact on the economy, specifically in the housing and automotive sectors. This is perfectly logical, as these two sectors are highly sensitive to interest rates.

A 50-basis-point move this week would be very bullish for the market… and technology stocks.

Couple that with the positive progress being made in the U.S.-China trade negotiations, and we’ll be positioned for a very strong end to the year and a positive start for 2020.

Both sides are working to sign a deal around November 16, when the Asia-Pacific Economic Cooperation meetings take place in Chile.

As technology investors, these are trends we’ll want to follow. I’ll report back on any progress I see. In the meantime, let’s turn to our insights…

The reason Virgin went public so quickly – and with so little fanfare – is because it backed into a direct listing. We talked about this back in July. Here’s what happened…

Venture capital firm Social Capital created a special purpose vehicle (SPV) and took it public in 2017. The SPV’s sole purpose was to acquire 49% of Virgin Galactic.

That deal closed today. The SPV now owns 49% of Virgin Galactic. And Richard Branson owns 51% of the company – enough to maintain a controlling interest.

The reason Branson agreed to this is twofold…

First, this was an easy and cheaper way to take the company public. It’s also a great way for Virgin Galactic to raise the capital it needs to further its mission. Commercial space flight is one step closer to becoming a reality.

As a reminder, Virgin’s spaceship can support two pilots and six passengers. Its purpose is to make space flight accessible to tourists… not just astronauts. Here’s how it will work…

A jet-powered aircraft carries the spaceship up into high altitude. From there, it fires its own rocket to reach Mach 3, which is three times the speed of sound.

The price tag for a visit to space: $250,000. More than 600 people have already signed up to travel with Virgin Galactic.

Now, $250,000 is too expensive for the average traveler. But as this industry progresses and as launches become more cost effective, the price of a ticket will naturally come down.

Don’t be surprised if you’re debating between Hawaii and space for your family vacation in a few years’ time.

The only downside to going to space is that the length of that vacation will be a lot shorter… But it will certainly be out of this world.

Please note: This is not an investment recommendation for Virgin Galactic. I have not yet formed an opinion on the company as this is just its first day of trading. But I wanted to get the news out to readers as quickly as possible.

Remote-controlled mining is coming to the Moon…

This autonomous technology would remove risk by allowing astronauts to stay inside rather than man the mining and construction equipment themselves. Much of the work could even be monitored and controlled via an Earth-based construction team.

That’s right… “Big Yellow” is heading to the Moon.

Caterpillar intends its development of lunar construction equipment to help NASA build a permanent base on the Moon. NASA plans to return to the Moon by 2024. 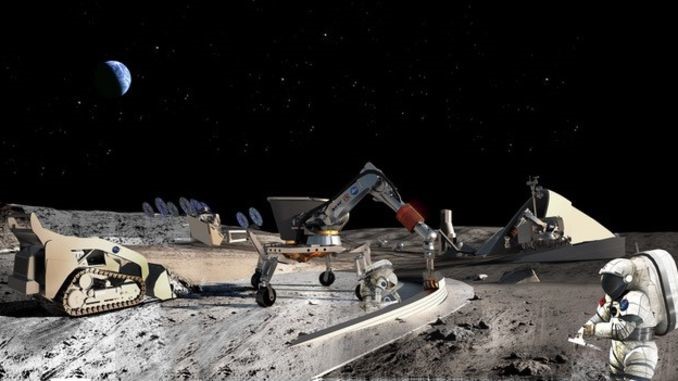 And believe it or not, Caterpillar has been a leader in applying autonomous technology to the mining business. The company has deployed 220 autonomous trucks itself.

What’s great about Caterpillar’s tech is that it is both safer and more efficient than manual mining equipment.

And the vehicles are massive. The trucks are two stories tall… which allows them to carry 250-ton payloads. And this happens without a human operator on site.

It is impressive to see an old heavy-machine company like this being so progressive with its technology.

Caterpillar has been able to innovate and develop its autonomous systems on Earth and then adapt that technology to a lower-gravity, extraterrestrial environment like the Moon. In order to have a manned presence on the Moon, this kind of machinery will be necessary.

Verizon is finally focusing on its core business once again…

We talked about Verizon’s bumbling foray into media back in August.

As a reminder, the company spent nearly $9 billion to buy deadbeat media companies AOL and Yahoo back in 2015 and 2017, respectively. Then, by December of last year, Verizon had to write off $4.6 billion worth of those acquisitions. It was a disaster.

What’s more, Verizon acquired the news company HuffPost (formerly The Huffington Post) and social media company Tumblr at that time. And those two were losing propositions as well. In fact, Verizon just sold Tumblr for less than $3 million… after buying it for $1 billion. That’s a massive hit.

Now the news is out that Verizon wants to sell HuffPost.

This may seem like a sign that the company is in trouble. But I view this as great news. It shows us that Verizon recognizes that it was a bad idea to move into media. It made some very bad investment decisions.

And by selling off these media assets, Verizon can invest more into its core business – 5G wireless networks. That’s exactly what it should be doing.

Remember, building out 5G networks is an expensive proposition. Some estimates put the figure at $100 billion for U.S. network operators to build out nationwide 5G networks.

Verizon could potentially have the best 5G network in the United States. The fact that it is now going all-in on 5G is great for us as consumers and good for its long-term business prospects.

So this is great to see. I applaud Verizon for making these tough decisions. And I hope AT&T follows suit.

Building out the 5G networks is an economic – and some would say national security – imperative. Network operators should stop wasting their time with these forays into media, which they do not understand, and focus on the serious work of 5G.