Just this morning, there is positive news regarding the ongoing trade negotiations between the U.S. and China.

There is hope for the signing of a partial trade deal as early as next week. And according to China’s Ministry of Commerce, both sides have agreed to lift some of the tariffs on one another. To no surprise, this news was well received by the markets.

This is a strong development for the tech industry. I’m excited to see what develops next week. This could be a catalyst for a strong finish for 2019.

I’ll keep monitoring the situation. Meanwhile, things are even more interesting in space…

We received signals from interstellar space…

Longtime readers know I’m a big fan of space-related stories. I even earned my Bachelor of Science in aeronautical and astronautical engineering from Purdue University. So when I found today’s first story, I knew I had to share it with The Bleeding Edge readers.

In late 2018, we received signals that Voyager 2 had passed into interstellar space. And at the start of this week, Nature Astronomy published the results of its journey.

As a reminder, Voyager 2 was a spacecraft launched in 1977 to visit Jupiter and Saturn. That was the goal. But the spacecraft proved capable of extending its journey far beyond that… So it and its companion spacecraft, Voyager 1, continue to explore space today.

I find this pretty fantastic. Here we are just over 41 years later, and Voyager 2 is still going. If we think back to 1977 when the spacecraft was launched… Jimmy Carter was president and Apple Computer had just been incorporated. It’s amazing this spacecraft has done so well.

And Voyager 2 has made some pretty important scientific discoveries…

Thanks to Voyager 2, we know where the boundary of the heliosphere is. The heliosphere is the Sun’s protective shield around the solar system. It blocks the strong cosmic rays from interstellar space that can be damaging. 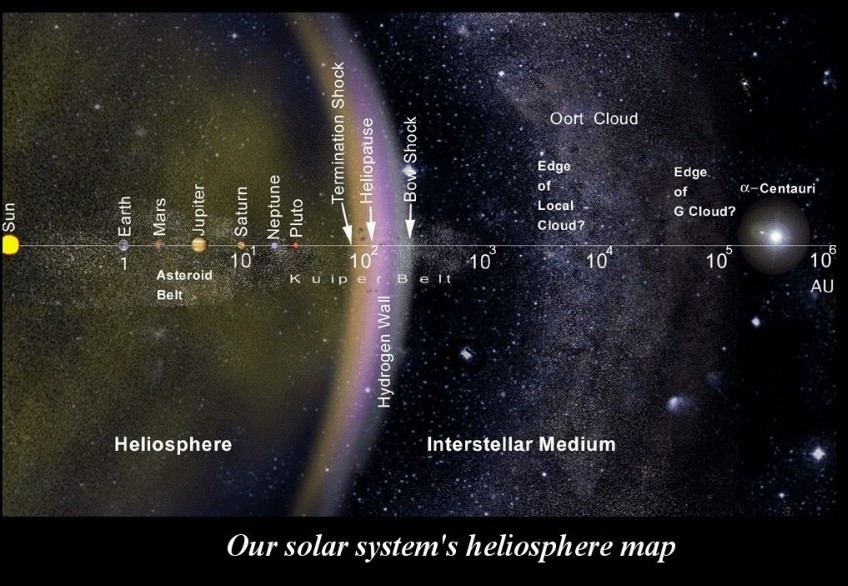 We now know the heliosphere border is about 11 billion miles from the Sun. That’s thanks to the data we received from Voyager 2. The data shows that plasma density jumped by a factor of 20. That’s the cosmic rays clashing with the Sun’s heliosphere… which tells us it crossed the boundary.

And here’s what’s interesting to me…

It took 41 years for Voyager 2 to get to interstellar space. And NASA predicts it will take another 300 years to get to the farthest region of our solar system, known as the Oort Cloud. The Oort Cloud is a vast collection of comets and space debris.

From there, assuming the same speed, it would take 30,000 years for Voyager 2 to exit the outer edge of our solar system. Think about that… That’s how big our solar system is.

That puts our problems here on Earth into perspective, doesn’t it?

And as Voyager 2 continues its journey, it carries with it a disk containing images of humankind, recorded greetings, and directions to Earth.

In hindsight, I’m not sure if that was a good idea or not… It depends completely on who finds it.

Researchers at Rensselaer Polytechnic Institute and Yale, my new alma mater, just developed a way to 3D print living skin. This is a breakthrough for health care …

Right now, skin grafts are not advanced enough to integrate with the patient’s skin cells. And that’s because they aren’t alive. The skin graft is basically just a bandage that accelerates healing and eventually falls off.

This is important because the living skin graft can provide a permanent fix… not just a Band-Aid. And this is an incredible development when it comes to treating trauma patients.

Patients who have suffered serious injuries where their skin has been burned or torn off will benefit tremendously from this breakthrough. Hospitals could have these living skin grafts on standby for use in their trauma centers.

But when it comes to human treatment, there is one more step. For the skin graft to integrate with a patient’s own skin, it needs to be genetically compatible.

Longtime tech readers will need no reminding. But for our new readers, CRISPR is a genetic editing technology that can “program” our DNA as if it were software code. I’ve been pounding the table on CRISPR since 2015. It will change the world in ways few predict.

And in this case, CRISPR will be used to modify the cellular structure of each skin graft to be compatible with the individual patient. This is something that could be done at the hospital before treating the patient.

So the big picture here is that 3D bioprinting combined with CRISPR genetic editing will have a revolutionary impact on health care in the coming years. 3D printed skin is just the beginning. We can imagine that as technology advances, vital organs will become printable as well.

Beaming solar energy down from space…

Back in 1941, American writer Isaac Asimov published a short story called “Reason.” In it, Asimov theorized that energy could be captured from the Sun in space, then transmitted using microwave technology.

Well, beaming solar energy from space is quickly becoming real. And it has numerous benefits over traditional solar panels…

Our atmosphere blocks a large chunk of the Sun’s energy that would otherwise reach Earth. So we get less solar energy on Earth’s surface that can be converted to energy.

On top of that, most of today’s solar panels only convert 15–18% of the Sun’s energy that hits the panel, and that’s on a sunny day.

But in space, we have a near-perfect environment capable of receiving and converting energy 24 hours a day. And then, that energy can be transmitted directly to Earth.

And you might be surprised who is investing in this technology: The United States Air Force. Its aim is to provide remote military outposts with electricity. Think about it. It can be dangerous and costly for convoys to transport generator fuel to remote outposts. But if we could “beam” solar energy down, that would be a game changer.

So this is an exciting project. And the reality is, it’s not just for military applications. The use cases are far greater for civilian populations around the world.

There is even a private company called Solaren working on this technology. Solaren has already signed a power purchase agreement with California’s largest utility company, PG&E, though it hasn’t delivered any power from space just yet.

Obviously, massive infrastructure needs to be flown to space to enable this kind of technology. Beaming meaningful amounts of energy down to Earth’s surface is no simple task.

But this approach is a promising technology to provide clean energy to the more remote places on Earth. This would supplement clean, baseload energy coming from radiation-free nuclear fusion reactors.

We’re going to see an energy renaissance within the next decade. Fragile, centralized power grids will be a thing of the past.

P.S. Before I sign off today, I want to put something else on your radar. You likely have heard the name Teeka Tiwari. Teeka is a friend and colleague. And like me, he’s very involved in the digital asset and cryptocurrency space. And I’ve always respected how he’s emphasized the importance of risk management in this space.

I mention Teeka because he’s hosting a free investing event next Wednesday, November 13, at 8 p.m. ET. It’s a new trading system that he’s never revealed publicly before. I’ll let Teeka give you all the details himself. But knowing Teeka, I’m sure it will certainly be worth your time. Go right here.