One final reminder before today’s issue…

Tonight at 8 p.m. ET (in just a few hours), I’m hosting a free online investing summit. And I’d like you to join me.

I’ll show you what I see coming down the line for four bleeding-edge technologies. And I’ll also be discussing the companies that I believe could make investors a small fortune as this tech reaches mass adoption.

I’ll even give you the name of my favorite early stage company that’s doing incredible work. It’s developing a piece of tech that could radically alter how we power our cities and our homes. I guarantee you’ve never heard of this company. That’s all I can say for now.

Thousands of Bleeding Edge readers have already saved their spots. If you’ve been meaning to get to it, then you must do so soon. The event starts in just a few hours. Go right here so you don’t miss out.

As I mentioned on Monday, I attended the first inaugural Amazon re:MARS 2019 conference in Las Vegas last week.

The focus of the invite-only conference was Machine learning, Automation, Robotics, and Space… That’s what MARS stands for. The event spun out of a private conference that Amazon founder Jeff Bezos held annually for years in Palm Springs, California.

This year’s version was more open. And it included a robust exhibit section where all kinds of robots were demonstrated.

A view of the Amazon re:MARS conference

But the real insights came from the presentations.

I learned some interesting things about drones, artificial intelligence (AI), biotech analytics, and even neuroscience. I’ll share some of the top insights with you today and tomorrow.

And keep in mind, unless you were actually invited to the conference, you couldn’t view the presentations. I’m very happy I can give readers of The Bleeding Edge this peek behind the curtain.

Amazon Go is the future of retail…

Naturally, there was a lot of discussion about the future of retail. Amazon is fanatical about fast-moving consumer goods (FMCG). It has built out one of the largest and most efficient distribution networks in the world with the goal of eventually delivering products within hours. It provides convenience that consumers cannot get anywhere else.

And Amazon’s strategic plans to dominate the FMCG market aren’t limited to e-commerce. Amazon has been building the next generation of the convenience store… Amazon Go. And Amazon has built the technology from the ground up just for this purpose.

These stores are powered entirely by AI and computer vision. There are cameras strategically placed throughout the store. These cameras use computer vision to track the activity of each customer.

When you walk in the store, you scan a barcode on your phone’s Amazon Go app that’s linked to your Amazon account. That’s how the cameras know who you are.

Inside an Amazon Go Convenience Store 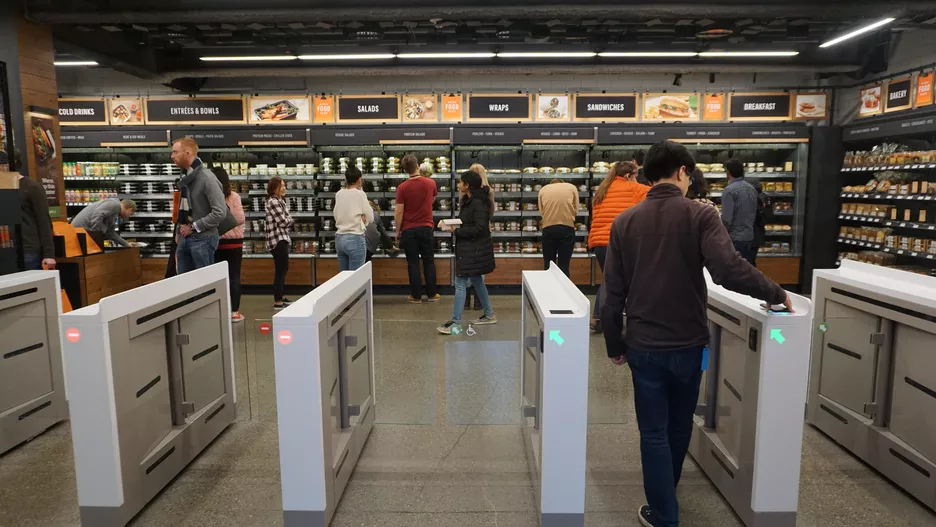 From there, you are free to browse and take any items you wish. The cameras keep track of which items you take. Then, when you are ready to leave, you just walk out with your items. Amazon will charge the credit card you have on file and email you a receipt.

That’s it. No lines. No checkout counters. No self-scanning counters. Walk in, grab what you want, walk out… How’s that for convenient?

There are 12 Go stores in operation right now. And number 13 is opening today in New York City. I am going to visit that one tomorrow.

I learned at the conference that Amazon plans to open 3,000 Go stores in the U.S. alone. It found that these stores do very well in busy areas where people need to make quick purchases.

For that reason, it firmly believes this is the future of retail. And other retailers will have to play catch-up in a big way.

For us as investors, that spells opportunity for companies that produce computer vision technology. It also means that I’m bearish on traditional FMCG retailers, which are going to be suddenly disrupted by Amazon’s new brick-and-mortar presence.

Did you know that Amazon has roughly 400 million products on offer? And did you know it now ships more than one billion packages every year?

Think about it… It has to get all these products to customers, often in two days or less after purchase. That’s a logistical nightmare.

To make it work, Amazon forecasts sales for each product every day. That means it must estimate how much of each product consumers are likely to order and plan accordingly. But with so many products and so much volume, there is not a single person or group of people who can make all those forecasts.

The difference is that neural networks can analyze thousands of variables and determine the best possible outcome… clearly, something that no human can possibly do.

Amazon had a breakthrough in 2016 when it deployed deep learning to analyze its supply chain, make business forecasts, and optimize everything for the best output.

And here’s what I uncovered at the conference…

Today, those neural networks are even smarter because they have been learning from these massive data sets for three years now. As a result, Amazon is now one of the top AI companies in the world. In fact, its entire business is driven by AI today.

Here’s one of the most exciting stories from the conference… Amazon’s Prime Air division unveiled its new drone.

I snapped a picture on my phone when it was shown on stage: 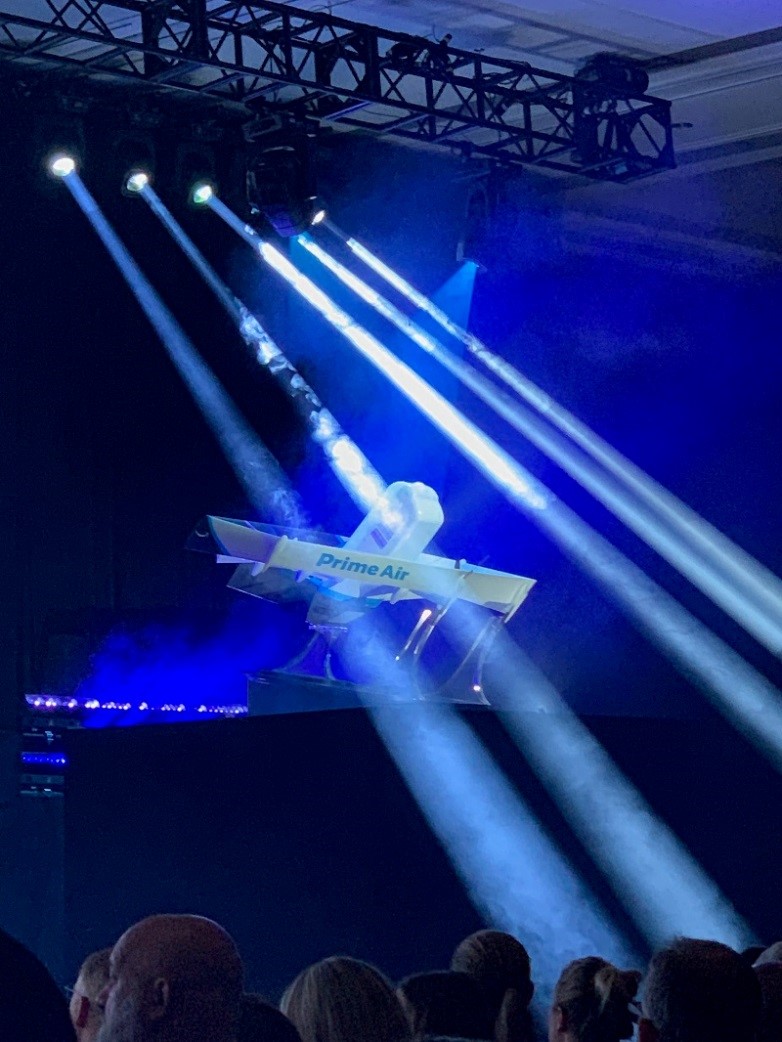 This was amazing to see in person. The drone has a sleek aerodynamic design. That makes it more maneuverable. It still takes off and lands vertically like normal drones. But the drone rotates, allowing it to fly straight like an aircraft.

As I’m sure you guessed, this is the drone that will make Amazon Prime Air’s first deliveries. Right now, it can carry five pounds as far as 15 miles. This capability will cover about 75% of all current deliveries by Amazon.

Prime Air deliveries will roll out in rural areas first. Customers can expect Prime Air packages within 30 minutes of purchase.

Here’s how it will work…

Customers will put out a landing pad with a big barcode visible from above. The drone will fly to the pad and make sure no people or animals are in the way.

Then it will plop down… drop the package… text the customer saying the package has been delivered… and fly back to its home base. The home base may be a logistics facility. Or it could even be the back of an Amazon delivery vehicle.

By the way, the drones will use neural networks to get better over time. And they will employ computer vision to detect electrical wires or other obstacles that may be in their way. Trust me, these things in action will be an incredible sight to see.

Service areas have not yet been announced, but Amazon plans to begin drone deliveries within the next few months. For those lucky enough to live in the first service areas, don’t be surprised if you see flying drones dropping off Christmas gifts this year…

P.S. And don’t forget to tune in to the Early Stage Investing Summit. We’ll be broadcasting starting at 8 p.m. ET. That’s just a few hours away. If you’ve enjoyed The Bleeding Edge, then I know you’ll want to be there. We’ll get started soon. So be sure you join us right here.